6
In Love With Him (Legolas Edition)
posted by Queen_Of_Ithaca
You are walking alone, when suddenly you hear singing. You look for the voice and see Legolas from Mirkwood. He sees you and you almost leave when he says, "I know you, you are _." "Yes," you say. "It is an honor to meet you." You blush and he asks, "Were you walking alone?" "Yes," you reply. "I don't see why someone like you would want to be alone," he tells you. Your eyes fill up with tears. "Ever since my brother died two years ago, I have found no hope for myself, so that is why is wish to be alone." "I'm sorry," he says sympathetically. "Come," he says suddenly, "I will walk you back to...
continue reading...
a light in darkness
posted by Mariasophie 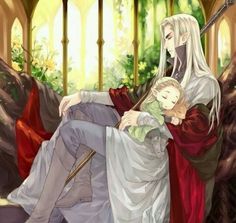 tranduil shuts everyone out in order to save the few of his alliance left
I believe that following the destruction of Beleriand and the War of Wrath, Oropher (and the rest of the Sindar Elves unwilling to leave Middle-earth) traveled to Greenwood the Great and merged with the Silvan Elves. It’s part of my headcanon that in order to merge these Elves, Oropher wed his son to a Silvan Elf. Not by an arranged marriage. Just as an act of good faith. And I like to think that when the Sindar Elves renounced their way of life to embrace the Silvan Elves’ rustic way of living, they embraced the way they celebrated most, their festivities.

In a way, I envision Thranduil...
continue reading...
1
How does Legolas sleep?
posted by Symbelmine
"Legolas already lay motionless, his fair hands folded upon his breast, his eyes unclosed, blending living night and deep dream, as is the way of elves...Gimli was still deep in slumber, but Legolas was standing, gazing northwards into the darkness, thoughtful and silent as a young tree in a windless night (p. 445)...As before Legolas was first afoot, if indeed he had ever slept" (p 447). Apparently, he can even sleep while he is walking around, "Only Legolas still stepped as lightly as ever, his feet hardly seeming to press the grass, leaving no footprints as he passed; but in the waybread of the Elves he found all the sustenance that he needed, and he could sleep, if sleep it could be called by Men, resting his mind in the strange paths of elvish dreams, even as he walked open-eyed in the light of this world." (p 448)
Prom Queen in Middle-earth by Ellynn 2. chapter
posted by LoveOfLegolas
This was not written by me but by Ellyn, a fanfiction writer.

They walked. And walked. And walked. With just one small break, they walked the whole day. And Amber had to follow. Everything was fine for the first hour or so. But then her feet started to hurt. She asked them to slow down a little, but to no avail. They just continued...
continue reading...
The Song of Nimrodel sung by Legolas
posted by Symbelmine
The Song of Nimrodel is a song sung by Legolas while he and the Company rested by the Nimrodel. The original song was in Sindarin but Legolas sang the song in the Westron speech. The song is incomplete because Legolas had forgotten much of it. The song was long and sad, for it told how sorrow came upon Lothlórien when the Dwarves found evil in the mountains. The song goes as follows:

An Elven-maid there was of old,
A shining star by day:
Her mantle white was hemmed with gold,
Her shoes of silver-grey.

A star was bound upon her brows,
A light was on her hair
As sun upon the golden boughs
In...
continue reading...
5
Legolas and Delenia chapter 1
posted by Christine0223 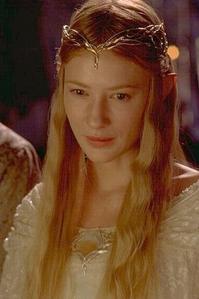 There are some places which you mite like more description to. Please tell me if you do want them or I won't give them to you. :)

Nearly every elf has heard of Delenia, the master of water. (When I said master, I didn't nean she is the mistress of water, what I mean is she can control water.). For 2000 years she lived with the water elves, (being one herself.) having conquered the sea monster, (description No. 1) and became the master of water.
It was easy to reckonise her. She had wavey long brown hair, and she usually wears a diadom given to her by the water elves. It was blue and etched...
continue reading...
1
Prom Queen in Middle-earth by Ellynn, chapter 3
posted by LoveOfLegolas
This was not written by me but by Ellyn, a fanfiction writer.

Night was no better than the day. Okay, at least she didn't have to walk for those few hours, but that was the only good thing. She didn't sleep well, despite being tired. In all her life, Amber Aphrodite Crystal has never known anything else but a warm room, clean...
continue reading...
1
Prom Queen in Middle-earth by Ellynn, 1.chapter
posted by LoveOfLegolas
This was not written by me but by Ellyn, a fanfiction writer.

1.chapter- Why falling into Middle-earth isn't the best thing that can happen to a girl.

Amber woke up with a headache. And very confused. She was not in her home town, in her own street, but on a grassy glade in a forest. What the fuck...? She looked around. What happened?! Where am I?!? This must be a dream. Except that she...
continue reading...
1
Prom Queen in Middle-earth by Ellynn, Prologue
posted by LoveOfLegolas
This was not written by me but by Ellyn, a fanfiction writer.

Manwë was leaning over a huge board. There were mountains and deserts, seas and plains, rivers and valleys. A big notebook was in his hands and he was adding some notes to it.

"What are you doing, darling?" The voice of his beloved Varda startled him from his deep concentration.

"Oh, just studying the weather conditions in the...
continue reading...
1
Happy Birthday prof. Tolkien!
posted by Symbelmine
Today 3 January is birthday of prof.Tolkien. Genius writer and creator of Legolas and all Middle Earth world. Thank you professor. Without you we would never have Lord of the Rings, The Hobbit, Silmarilion....and we would never know those amazing characters like Legolas, Aragorn, Gandalf, Thorin, Glorfindel and other. Have a happy birthday!

John Ronald Reuel Tolkien, 3 January 1892 – 2 September 1973) was an English writer, poet, philologist, and university professor, best known as the author of the classic high fantasy works The Hobbit, The Lord of the Rings, and The Silmarillion.