2
How Luffy and Nami Got Together
posted by Mata10
This is a Updated and Improved Version of Luffy and Nami: Great Love that I made a long time ago. So enjoy.. :)

As Nami was running away from Buggy's men until as canonball was fired at a bird and a man fell. Nami gasped as she though someone had died. But, It was Luffy and he's not dead. "Who are you?? And you lady...But you're very pretty." Luffy said to Nami and the Buggy Pirates. Nami blushed at what Luffy said. "Huh, who the hell are you dumbcrap!" One of Buggy's Men said and threw Luffy's Straw Hat from Luffy's head. Luffy got mad as he punch the guy and beated the crap out of 2 more of Buggy's men. Nami looked abit shocked but then relieved they are defeated. "My Hero." Nami said and hugged Luffy really tight. "Um, Hi well...What's your name??" Luffy said. "I'm Nami, and I am a Navigator." Nami said. "Well, that's great!! I'm Luffy!!" Luffy said. "Well Hi Luffy! You're an amazing fighter!" Nami said. "Thanks!(stomach rumbles), but I'm HUNGRY!!" Luffy said. "How about I buy you something to eat." Nami said and rubbed Luffy's stomach. "Alrigh!!, Thanks Nami-san" Luffy said. Nami blushed a bit and thought "Belimere, I'm in love...' Luffy stared into her eyes and thought 'I..I in love...' Soon after they ate, they stayed at a house for a few hours. "Well, Nami-san, what's your dream??" Luffy said. "To draw the map of the world..and you Luffy-kun? What's your dream?" Nami said. "To be King of the Pirates!!" Luffy said. "What?! So you're one of them!! Nami said. "No Nami-san, I'm a good pirate! I'm very kind!!" Luffy said. "Well, I will believe you.." Nami said. "Thank You Nami-san!!" Luffy said. Nami smiled as she told Luffy "Ok, We've better stop Buggy before he destroys the city!" Soon, Luffy and Nami made it to Buggy's. "Well, Buggy I would like to join your crew!" Nami said as she looked at Luffy with a devious smile. Luffy knew Nami was trick to steal Buggy's map to the grand line. But, unexpectedly Buggy captured Luffy and trapped him in a cage. Soon, Nami had to fire a Buggy Ball at Luffy or die. "Nami, Please don't die!" Luffy said. Nami blushed as she thought 'he's the perfect one.' Soon, she burned out the fire with her bare hands. Luffy was shocked but, tried to open the cage. Later after Zoro came, Nami came with the key and gave it to Luffy and smiled. But, ShoSho ate the key to the cage and Luffy beated it out of the dog. Soon after Luffy beated the lion tamer and his pet giant lion, Luffy gave ShuShu his pet fpod which made him happy. Nami was happy as she apologized for calling him a bad pirate. "It doesn't matter, I feel your pain for bad pirates." Luffy said to Nami. Nami couldn't take it anymore and grabbed Luffy as she was gonna kiss him until a Buggy Ball landed in the hospital where Zoro was treated. "Zoro!!" Luffy said. But, Zoro wasn't damaged as he was still snooring. Finally after, Luffy saved Nami from Buggy, Nami saw Luffy's torned hat and felt down until she remembered 'I need to confess to Luffy-kun' Soon she went to Luffy and hugged him tight. Luffy hugged her back and finallu told each other "I love you". They kissed passionately. They moaned as they made out for 5 minutes. Later, they parted as they hold hands and picked up 1 bag of money and Zoro and went on their boat and lefted. Soon after fixing Luffy's hat, Nami went to sleep with her Luffy-kun. Nami kissed Luffy as Lufgy kissed her back. Luffy and Nami don't like each other, they LOVE each other forever.

Well guys I hope you enjoy the remake.

By Danny(LunaZoro)
miyabi123456789 and Luffy_Nami like this
Luffy_Nami That was really sweet. I love how you told it from Namis perspective.

1
Happiness Punch
added by snazzpurfle13
nami happiness punch
video
luffy
nami
luffyxnami
happiness punch
2
Super Human 2 Luffy vs. Enel, Never Take My Nami!
posted by LunaZoro
Robin woke up and told Luffy "Enel took Nami.." Luffy got super pissed and went towards Enel's ship. Once he was there, Nami saw Luffy and cried, yelling "LUFFY!!" Enel saw Luffy and gave him a stare. Luffy ran and went up the ship and turn Super Luffy (reference to Super Vegeta). Luffy punched Enel in the chest and kick his side. Luffy said "Never take my Nami-chan!!" Luffy blasted his Kamenko (name of the energy beam) and blasted it at Enel. "Luffy-kun" Nami said as she kissed him passionately. Luffy kissed her back more passionately. Once they parted Luffy asked "How is the baby?" Nami smiled...
continue reading...
3
Super Human Luffy vs. Arlong, Luffy and Nami's Unbreakable Love
posted by LunaZoro
Luffy begins to inrage with screams, as his hair turned blonde and raised up. "Luffy" Nami said softly. Luffy leted out his finally scream as he finally turn Super Human(by the way Super Human is like Super Saiyan but it only works with humans and you have to train with a master who mastered it). He turned to Arlong, who is trembling from the massive shake. "ARLONG YOU ARE GOING TO PAYYYY!!!" Luffy yelled at Arlong. Arlong laughed loud as he said "What just because of your blonde with blue eyes doesnt change anything, you'll still DIEEE!!!" Arlong charged at Luffy but, Luffy went and punched...
continue reading... 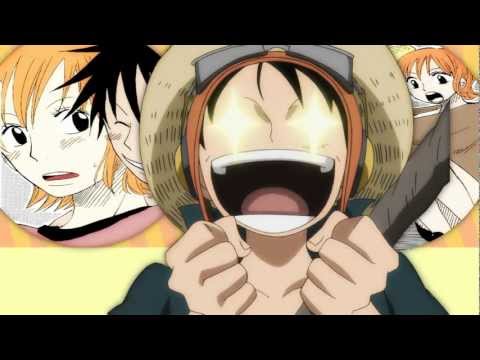