1
Luigi Gets His Hero On Chapter 5: No Entry
posted by Skittygirl
After long seconds of pure adrenaline and wind being whipped across the face, they finally began to angle downward (which was a relief for Luigi in a way he didn't want to reveal yet until they got down) and eventually they landed in front of Bowser's Castle. Yoshi managed to land on a bush, while Luigi, who closed his eyes and screamed the entire time, landed head-first on a huge boulder just near the Castle door.
"Ow," Luigi complained under his breath.
"There," Yoshi said to Luigi as he hopped out of the bush and looked at the door of Bowser's Castle, "wasn't that quick? And it was fun, too—well, maybe a little too dangerous, but at least we saved time and we didn't have to explore Worlds and face a multitude of Bowser clones all over again, right?"
"Remind me again why I didn't care about these in the first place," Luigi muttered in a queasy voice as he clamped his hand over his mouth, ran around looking for an inconspicuous spot, and promptly puked his guts on it.
"Um, gross?" Yoshi suggested, trying hard not to look.
"And that, Yoshi, is why gamers seem to forget about the warp zones they unlock," Luigi said to the green dinosaur when he'd finished vomiting. "They'd rather explore the hard but safe way than the easy but sick way!"
Yoshi had to bit his cheeks in order not to laugh at the sick look on Luigi's face. "To be honest, Luigi, you kinda look as green as your clothes right now."
"Exactly," he snapped.
Yoshi focused on the Castle door to distract himself. "Okay, there's the Castle door—shall we head in or do I need to wait until you've barfed out just enough to move on?"
"No, I got it—let's a-go." And Luigi walked ahead of Yoshi to barge in, only to receive an electric shock coursing through his body.
"Yaaaaaaaaaaagh!" Luigi screamed at the top of his lungs as he got electrocuted.
Yoshi rushed toward Luigi's blackened figure, lying down on the ground, which was warm due to the volcanic activity that surrounded the area.
"You okay, pal?"
Luigi mumbled a few unintelligible words as his face remained pressed to the ground; it seemed as if he was saying, "It's too dirty and hot." Then he got up, shaking off from his charcoaled form. "Okay—is it me or did Bowser install a new shock feature to his security system?"
"Bowser hadn't done that before," Yoshi said in a speculating voice. "That sure is something that has to come across a guy's mind."
"That's not worth thinking about," Luigi disagreed. "What's a-really worth speculating is why did Bowser think of installing it now, just when we're here, up and ready to break everyone else free."
"He must really take the whole 'capture Mario' thing seriously—after all, he and Mario have been rivals since the dawn of Super Mario Bros."
"If it was called 'Super Mario Bros,' why didn't it include me?" Luigi demanded.
"It's up to Satoru Iwata for that," Yoshi answered in a dismissive tone. "But enough of breaking the fourth wall—let's save it for later—we need to figure out a way in!"
"Yoshi, if people who are very much aware they're in a show or movie or whatnot are called 'breaking the fourth wall,' do you think it's still called the same thing for what you just did?"
"What did I just do?"
"You are perfectly aware that you're breaking the fourth wall. Is that the same thing, or is being aware that you're actually breaking the fourth wall breaking the fifth wall?"
"Luigi, no one has invented 'fifth' wall...yet."
"Maybe someone will."
"Luigi, we are off-topic!"
"Oh? Oh yeah, right!" Luigi turned looked around the Castle when he spotted an open window. "Up there, Yoshi—quick, toss me up!"
The green dinosaur held the green plumber up (grunting heavily as he did), he spun a couple of times before he practically threw Luigi up into the window...
...or he thought Luigi could enter when the plumber received another electric shock.
"MAMA MIA!" Luigi screamed as he got electrocuted—again.
Then, for the second time, he landed with his face flat on the ground.
"Luigi?"
"Why does this keep a-happening to me?" Luigi complained.
Yoshi tried to get him up. "So much for infiltrating Bowser's Castle through the window," he sighed.
"Theez isn't fair," Luigi ranted. "Why doesn't he install that stuff when Mario goes a-rescuing? He always leaves his Castle security-free!"
"That can mean lots of things—either he doesn't want anyone to interfere with the fact he's finally got Mario good, or simply he doesn't like us."
"I take the latter."
"Well, we can't just stay here doing nothing—we need to figure out a way in."
"Yeah, but how...?"
It was then that Luigi noticed an inscription on the base of one of the Bowser statues that were on either side of the Castle door.
"Hey, Yoshi, did you see this?"
"What's that?"
"Hmm." Luigi examined the inscription closely and read it very carefully. "Several colors where rainbow swirls, a speckle in the seas you must head first. Among the forest mass and its trees you must be, to engage so the next destination you will see...Ah, this doesn't make any sense!"
"Now hold your overalls, Luigi, I think this might be a clue."
"A clue—as in, it'll help us figure out how to get inside?"
"That's exactly it!"
"Now what a-makes you think a riddle will help us out? The words mean everything and nothing at the same time!"
"That's exactly why we need to figure it out."
And the two were deep in thought now, trying to figure out how to bypass Bowser Castle's now-tight security system.

Inside Bowser's Castle, deep in the dungeon:
"Get us out of here!" Mario bellowed, his voice echoing off the deep chambers of the dungeon.
Mario was all alone in his cell—the rest of the captives were in their own little groups, in their own prison that were practically far off Mario's. Even Princess Peach wasn't alone behind her bars—her ward, Toadsworth, was right beside her.
One of the Toads who were in the cell closest to Mario spoke to him in a panicked voice. "Mario, what'll we do now?"
"For now we need ta' get out of here if it's the last thing we'll do."
"But you're the one who's done all the rescuing, and now you're here, trapped along with the rest of us!"
"Well, I may be behind bars, but my brother isn't."
"Your brother...? Are you referring to...Luigi?"
"Yep—and he's not alone; Yoshi's with him. Bowser said he 'captured everyone in the Castle' but he only took in the ones who were inside the place at the time—Luigi and Yoshi were not."
"So that means...?"
"Yes," Mario said with fierce hope gleaming in his eyes. "I know Luigi will save the day this time around, and I know he'll be able to do it! I'm a-betting my next bite on my puttanesca that Luigi's on the rescue as we speak."

Back outside:
"So...," Luigi stifled a yawn, "have you a-figured out what the hey that riddle meant?"
Yoshi (sadly) shook his head. "Nope—I've got nothing."
"Well, then I'm all lemons here." Luigi plopped himself down on the warm ground.
"I...can't seem to make it all add up—'Several colors where rainbow swirls...,' " Yoshi recalled.
" '...a speckle in the seas you must head first...Among the forest mass and its trees you must be...blah, blah, blah, and all the rest," Luigi finished, bored. Then he frowned and whispered, "Wait...I don't suppose...?" He looked at Yoshi and studied him. "Yes, yes, I see what the first part might mean...rainbow swirls a-might not be taken literally..."
"What're you thinking, Luigi?"
"Take a gander at this, Yoshi—your kind come in different colors, right?"
"Uh...y-eah...?"
"You don't suppose by 'several colors where rainbow swirls' the riddle was a-referring to all of Yoshi-kind?"
"So...I'm the answer to the riddle?"
"A-no, not really—that's not how I thought of it. But...when I thought of you, and added it up with 'a speckle in the seas...Among the forest mass and its trees you must be,' that's when I figured out the answer a-might just be in Yoshi's Island."
"Please translate."
"Look at this—'several colors where rainbow swirls,' that's likely to refer to all you Yoshis and the many colors you come in; 'a speckle in the seas you must head first,' that could mean an island. Connect the fact with all you multi-colored Yoshis and the possibility of an island, and...A-there you go—Yoshi's Island!"
Yoshi stared at Luigi, stunned. Then he laughed in a shock. "You know, Luigi, I never thought you had sleuthing skills until today!"
Luigi laughed nervously.
Yoshi stood up. "Okay, Luigi, looks like we're off to my homeland!"
The plumber stood up as well and nodded. "A-yup, to Yoshi's Island, all right! Let's a-go!" 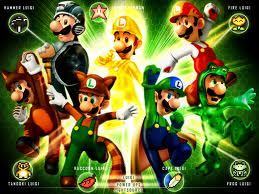 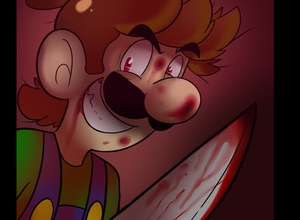 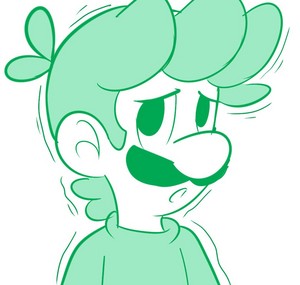 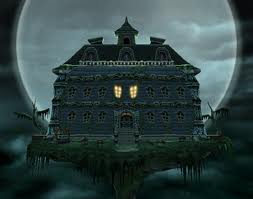 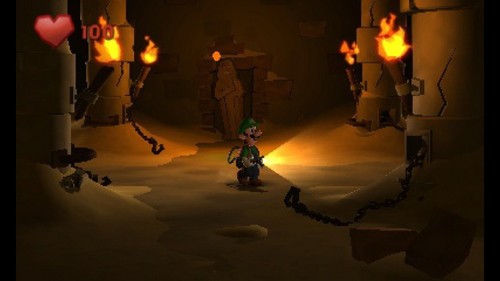 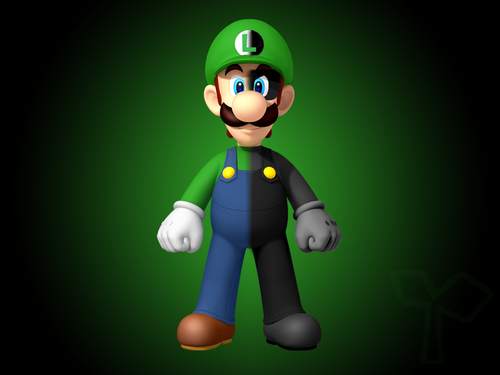 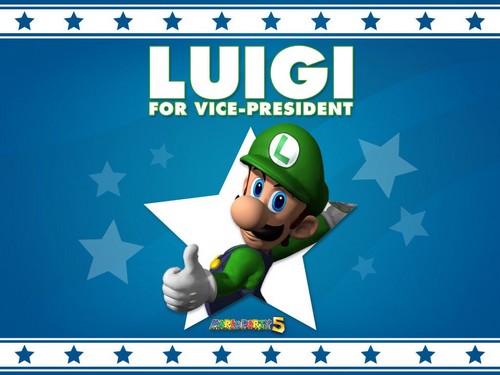 2
Luigi for vice-president
added by luigi1983 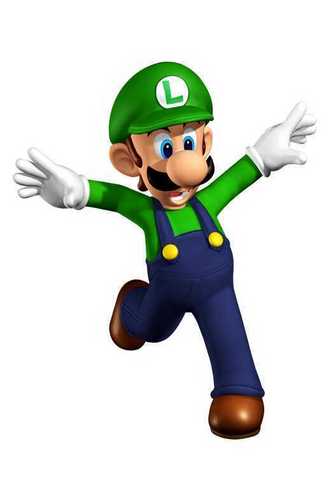 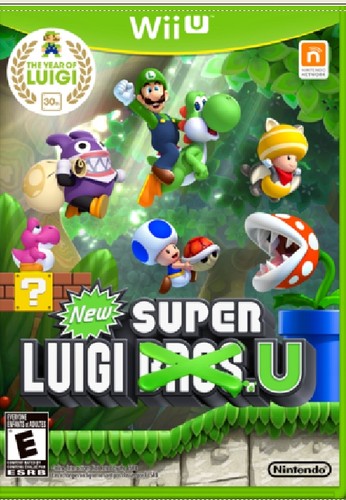 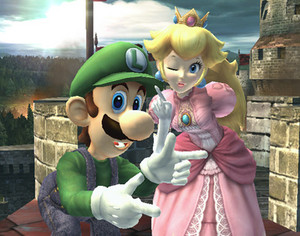 NOT FOR MARIO AND DAISY
added by luigilover13 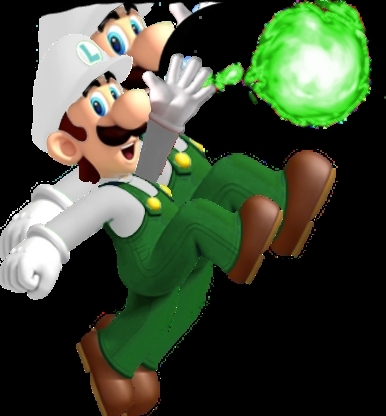 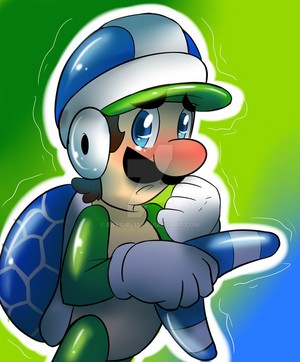 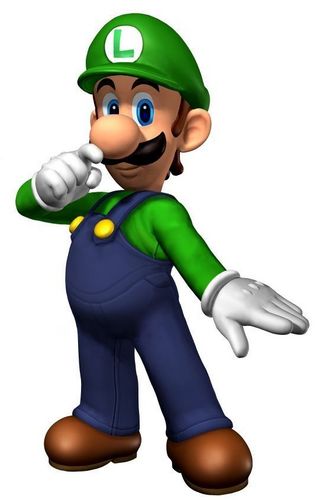 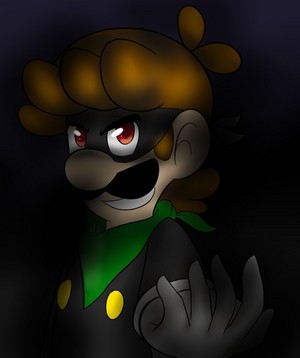 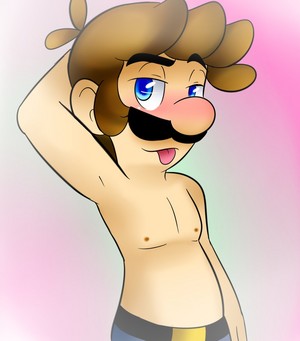 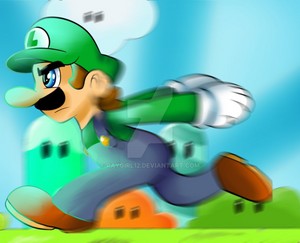