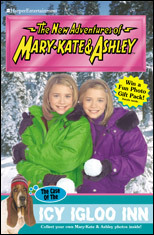 "Wow!" my sister, Ashley, said. "You don't see snow like this at home in California!"
"Unless it's in a snow globe!" I joked.
Ashley and I still couldn't believe it. It was winter break, and we were sitting in a real-life dogsled pulled by a team of Siberian huskies. And here's the best part-we were heading straight for a hotel made of ice!
"You girls are going to love the Icy Igloo Inn!" Irving Cathcart called from the back as he steered the sled. "As Iris and I like to say, 'It's where cool rules!'"
Irving and his wife Iris live all the way up in northern Canada, where they run the Icy Igloo Inn. Irving is our great-grandma Olive's first cousin.
Ashley and I think great-grandma Olive is the best great-grandma in the world. She's also the world's best private detective!
"Iris and I heard that you girls are detectives too," Irving told us. "Is that true?"
I nodded. "Ashley and I run the Olsen and Olsen Detective Agency from the attic of our house," I said.
"Some people call us the Trenchcoat Twins," Ashley explained with a little shiver. "But it's way too cold for just trenchcoats out here!"
The dogs kicked up snow as they raced on. Our sled passed frozen lakes and snow-frosted trees. I suddenly spotted a big white building in the distance. It looked all white and shiny, like a licked-over vanilla popsicle!
"Wow!" I exclaimed. "That house is totally covered with snow!"
"That's because it is snow . . . and ice!" Irving said. "Girls, welcome to the Icy Igloo Inn!"
My mouth dropped open. So did Ashley's. We expected to see some kind of giant igloo, like the kind that Eskimos build. Instead, the inn looked like a big Swiss cottage with a pointy roof. Everything seemed to be made of ice--even the front door and the shutters on the windows!
"Awesome!" I cried.
The huskies stopped in front of the inn. Irving helped us climb out of the sled. Then he held open the front door of the ice hotel as we walked inside. It was so cold, we could see our breath hanging in the air like little white clouds.
Ashley and I looked around and gasped. The walls were made of solid ice. Luckily the floors were made of hard-packed snow, so we didn't need ice skates!
"There you are!" a voice called out.
Ashley and I turned. A woman with rosy cheeks and bright blue eyes was hurrying toward us. She wore a blue parka, furry white boots, and a hat with earflaps.
"Here comes Iris with a warm welcome!" Irving said.
"Not too warm, Irving!" Iris said, wagging a gloved finger. "Or we're in big trouble!"
The Cathcarts showed us around the Icy Igloo Inn. There was a central living room, a dining room, lots of bedrooms, and a kitchen for preparing food. And all the furniture was carved out of-you guessed it-ice!
There was even an ice-cream parlor with a counter and stools made of ice. But instead of ice cream, Irving and Iris served sno-cones made of real snow!
"Are the sno-cone cups made of snow too?" Ashley asked.
"No, dear," Iris said. "Not everything in the inn is made of ice or snow."
"In fact, there's a heated bathhouse attached to the hotel," Irving told us.

"Good!" I chuckled. The thought of an ice-cube shower made me shiver!
Next the Cathcarts showed us to our bedroom. Inside was an ice chair carved to look like a big seashell. And a beautiful dresser carved out of ice too. Spread out on the beds were two thick fur rugs.
"Those are reindeer skins," Iris explained. "They're great for keeping you warm during the night."
"Cool," I said.
"You mean cold!" Ashley said. She rubbed her mittens together. "Where do you keep the heaters?"
"Heaters?" Irving and Iris cried together.
"We don't allow anything that might melt the inn before the spring thaw," Iris said. "No hot plates, no hair dryers-"
"And no salt either," Irving added. "Salt melts ice."
"What about hot cocoa?" I asked. "What's a winter vacation without hot cocoa and marshmallows?"
"We allow some hot food and drinks at the inn," Irving said. "Especially hot cocoa and soup."
"Just try not to spill any," Iris said in a shaky voice. "You have no idea what spilled cocoa can do to ice!"
"Now follow us, girls," Irving said with a smile. "There's someone I want you to meet."
As we followed the Cathcarts out of the room, I whispered to Ashley, "They're really nervous that the inn might melt."
"Yeah," Ashley whispered. "Great-grandma Olive didn't tell us that!"
The Cathcarts led us to a room we hadn't seen yet. The first thing I noticed was an icy chandelier hanging from the ceiling. The next thing I noticed was a bunch of sculptures-carved out of ice!
A boy with blond hair stepped out from behind one. He was wearing a black parka, black pants, and black boots.
"This is Lars Lindstrom," Iris said. "He's only fourteen years old, and he carved all these sculptures."
"Lars comes to us from Sweden," Irving added. "His parents are old friends of ours, but this is Lars' first time visiting."
"Lars is the champion junior ice sculptor of his country," Iris said proudly.
"Of the world!" Lars corrected.
"Lars is staying here from Wednesday until Sunday, just like you girls," Irving explained. "Then he's leaving us his sculptures for our future guests to enjoy."
"These sculptures rock!" I said as we checked them out. Among the ice carvings were an oversized penny, a huge bottle cap, and even a giant toad!
"I call this group of sculptures Inside My Little Brother's Pocket," Lars said. "It represents the torment of clutter in the modern world and-"
"Lars!" Iris gasped. She pointed to his chest. "Is that a camera around your neck?"
"Yes," Lars said. "Why?"

"Flash photography is not allowed at the inn," Irving said. "The heat from the flash might melt the ice!"
Here they go again! I thought.
"Nonsense!" Lars scoffed. "I must photograph the inn."
"Why?" Iris asked.
Lars didn't answer.
The Cathcarts exchanged worried glances. Then they shook their heads at Lars.
"Sorry, Lars," Irving said. "But if you insist on taking pictures, you'll have to leave the Icy Igloo Inn."
Lars turned away. "Nobody asks Lars Lindstrom to leave," he said under his breath. "From anywhere!"
"This is what I call a 'heated discussion'!" I whispered to Ashley.
"Don't let them hear you say heat!" Ashley giggled.
Ashley and I went to explore the inn on our own. We checked out the ice bookshelves in the living room. They were filled with real books.
"Hey, Ashley," I said. "Did you ever notice that Iris and Irving both have the initials I.C.? As in . . . icy?"
Ashley was busy rubbing a frosty windowpane with one mitten. "Check out this awesome view, Mary-Kate!" she said.
I ran to look out the window. Outside was a frozen lake surrounded by snow-dusted trees. The ground was totally covered in snow too.
Ashley and I looked at each other and grinned.
"It's a winter wonderland!" I declared.
Then suddenly . . . Splash!
We turned back to the window. A man and a woman were bobbing in the freezing lake!
"Omigosh, Mary-Kate!" Ashley cried. "Those poor people just fell through the ice!"
luvbellathorne likes this