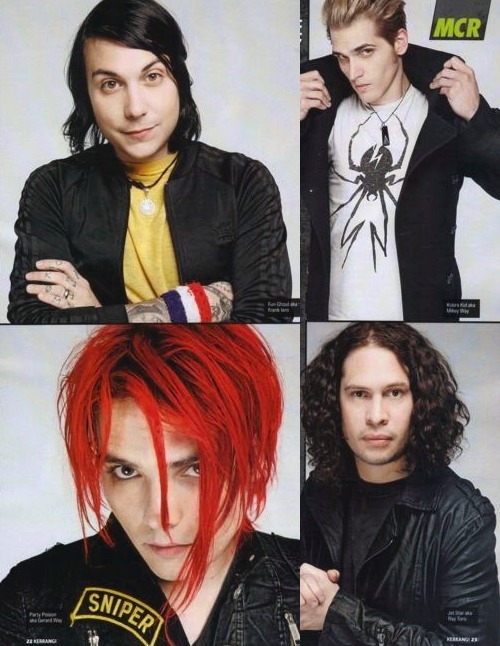 khairinafifah and jbiebs22 like this
jbiebs22 OH!!!!! I JUST LOST MY BREATH!!!!! hot hot HOT!!!!! killjoys rule!!!!
MyDeadSummer ^Why are your comments always so damn funny? x'D!

3
Have some Compassion!
added by fallingmelody

2
fwankie and gee
added by sahian5

1
mcr
added by sahian5
2
MCRmy Spirit
posted by Dawni696
Gerard Bleached his hair again, so poeple are freaking out, and EVERYONE is talking about it. I'm sure a few poeple even think its tragic. But the hair isn't what it's about, OKAY so the hair is kinda a big deal, but the MCRmy know that the hair isn't what won thousands of poeples' hearts. The hair isn't what saved Gerard when he was in bad shape. The hair didn't sing the songs or write the comic books. MCR's Music won poeples' hearts, MCR saved Gerard when he was in bad shape, Gerard sang the songs, and Gerard Wrote the comic books. So to all the Demolition Lovers, to all the Killjoys, and to all the soldiers in the MCRmy; We are the kids from yesterday, we cheered for sweet revenge, we love Ray, Mikey, Franky, and Gerard. The MCRmy called, and we came. We are calling you, will you awnser the call?
2
funnny quotes
posted by mcrluv122996
"you should have seen me as a chick. i looked hot as a chick!"
~Gerard Way

1
Dr. Death Defying - A Message To The MCRmy
added by mcrkilljoygirl
video
mcr
mcrmy
help
gerard way
chemical romance
mikey way
frank iero
ray toro
killjoys
danger days: the true lives of the fabulous killjoys
1
Killjoys Of The MCRmy - IMPORTANT
posted by ArsenicBaby
Keroscene Cola wrote:
MAY 31ST
On MAY 31st 2008 hundreds of MCR fans stood up for the band, The Sun Times a British tabloid had falsely printed that their music made someone commit suicide. On MAY 31s these fans joined together in protest of their bands' persecution. Friends, our band is persecuted no more but I think it's time we paid them all a proper tribute.
In the video Kids from Yesterday they thank us but I think they have it backwards. It is us who need to thank them. On MAY 31st 2012 we will let them know how much we care! Gerard and the rest of the band have said some amazing life-supporting...
continue reading...