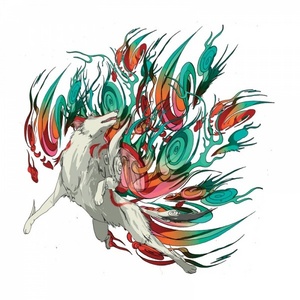 Solar Flare
These are known through the game as Divine Instruments. They can be optained through defeating bosses and buying them from merchants. Some even grant elemental powers whenever Amaterasu needs it. Two Divine Instruments can be equipped at a time, one as a main weapon and another as a sub. Each weapon acts differently depending on what it's set to.
When you start a new game all weapons will be brought forward to the new file except the final tier weapons.

The Reflector
The ancient mirror treasure was used, not as a mirror in the modern sense, but as a ceremonial object. We tried out a lot of different ideas when we were in the design testing phase, but because the mirror on Amaterasu's back balances well with the character and helps to really bring home the point that Amaterasu is a sun god, we decided to make it the basic weapon that the player first encounters. The reflector weapons carry a good balance of speed and power, making them the easiest to use. They also work well as a sub weapon since they can be used for defense unlike the other weapon classes. If the player successfully defends against an enemy attack using the sub weapon, then it can open up some enemies for a throw. Throwing an enemy can cause a lot of damage. In addition, if the block is timed just right, it can restore some of Amaterasu's health. Also if used to defend at the right time Amaterasu will use a smash attack which will give out Demon Fangs.

Although the ability to defend is well suited for beginners, it can also be useful for experts who master the technique thanks to the power of the throw feature. By learning the "Wailing Mirror" technique at the Dojo, Amaterasu's health can be restored by blocking even if the timing is not just right. This is the weapon to have for players interested in a more defensive style.

There are five reflectors availible in the game and they get stronger as you go up the line:

Divine Retribution
Snarling Beast
Infinity Judge
Trinity Mirror
Solar Flare
The Rosary
The necklace treasure is a symbol of life. It is said that the beads represent the life force inherent in the womb. The rosaries act as the long-range weapon in Okami. As primary weapons they act as a whip and as sub weapons they act as bullets being fired. Rosaries are the weakest of the three weapon classes, but they are perfect for players who want to keep their enemies at a distance. Rosarys also have no recharging time between use so you can keep firing combo after combo. This also makes it the best generator of Godhood. Different rosaries equipped as sub weapons produce different bullet effects, so we recommend trying them all out. It's also possible to further increase the firing speed by learning the "Bead String" technique at the Dojo, resulting in some rapid-fire action.

Like reflectors, there are five Rosary's availible in the game and they get stronger as you progress in the game. These Rosarys are:

Devout Beads
Life Beads
Exorcism Beads
Resurrection Beads
Tundra Beads
The Glaive
The sword treasure is a symbol of power. You obtain your first Glaive considerably later in the game compared to other weapons. Among the different Divine Instrument weapons, the sword is the only one capable of a charged attack for dealing more damage. Of all the weapons, it is the slowest to wield, but it makes up for speed with power. For players who are confident that they can land their blows, this is definitely the weapon for them. The glaive class of weapons packs a punch equipped as the main or as the sub weapon and is suited for battles focusing on dealing heavy damage to the enemy. There are two levels of charged attacks depending on how long the weapon is charged. After learning the "Sword Dance" at the Dojo, the amount of time it takes to charge up an attack is cut in half allowing for quick and devastating attacks in battle.

When used as a sub attack, Amaterasu will jump into the air and sail into her enemy upon the glaive. This move too has to be charged.

Once again there are five types of Glaives and they grow in strenght when you progress up the line. The Glaives are: 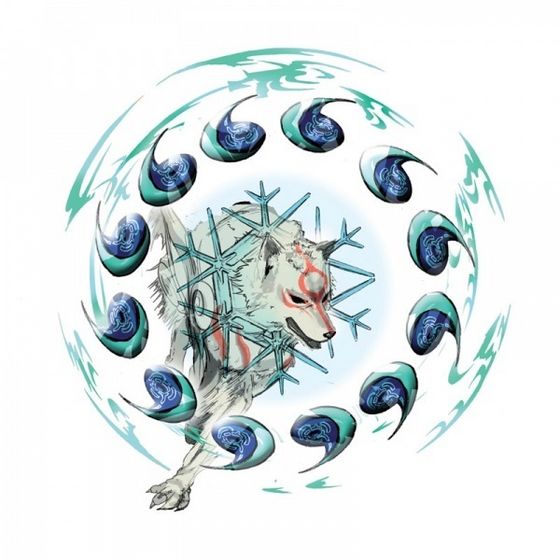 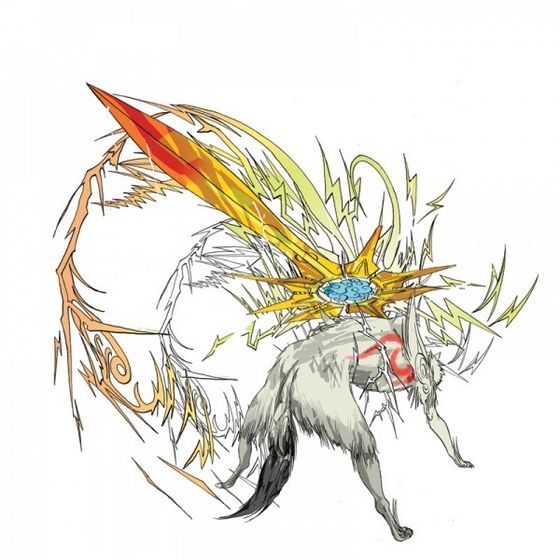 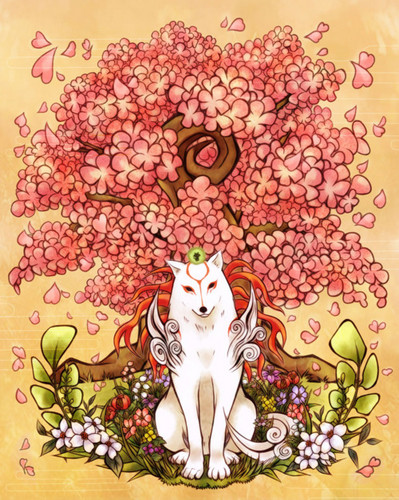 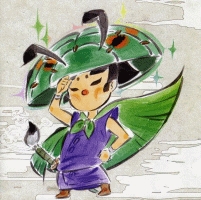 The inspiration for Issun, Amaterasu's wisecracking sidekick, as well as the Lucky Mallet.

After years of marriage, a childless couple begged the gods for a child, even if they were as small as a fingertip. And thus, the gods took their words literally, and Issun Bōshi was born.

When he turned fifteen years old, Issun traveled to the capital of Kyoto, bringing with him a rice bowl, a pair of chopsticks, and a needle inside a bamboo sheath. He went down the river using the bowl as a boat, and the chopsticks as oars. When he arrived to the city, the boy was employed under the service of a noble...
continue reading... 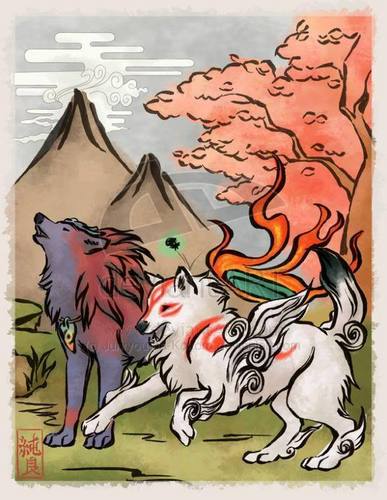 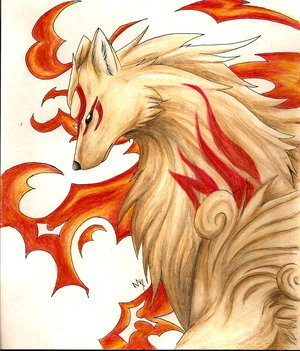 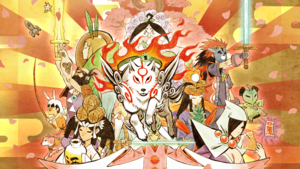 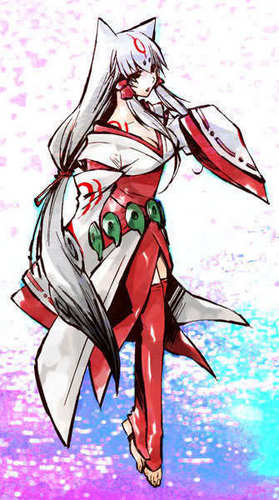 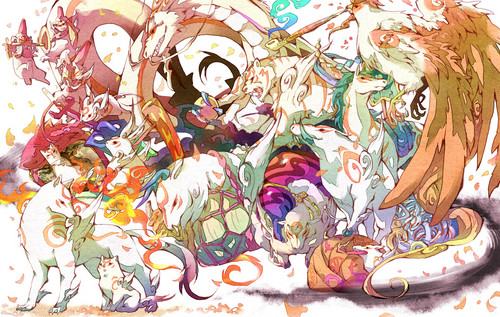 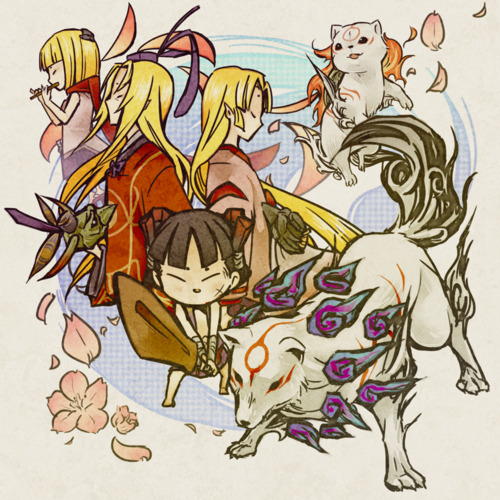 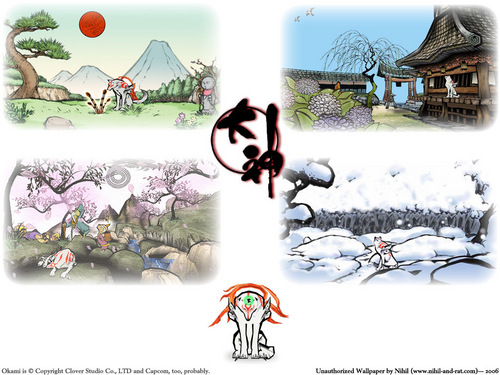 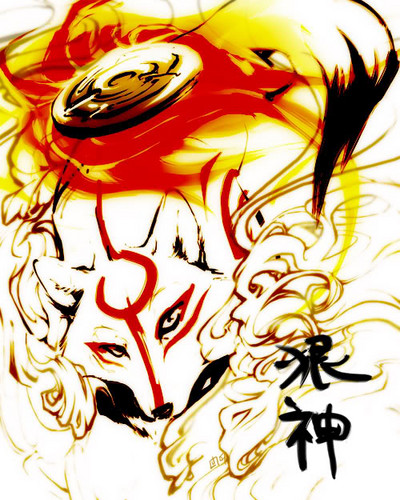 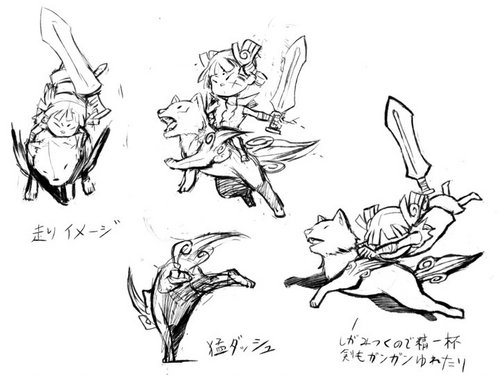 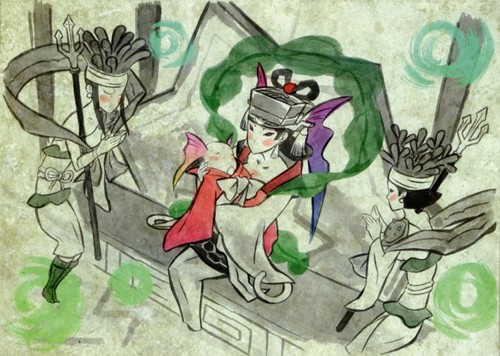 Otohime and her Child
added by Okami_Amaterasu
Source: Okami Wiki 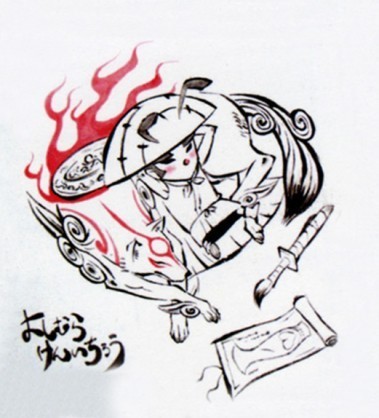 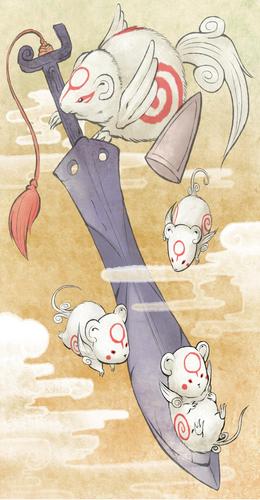 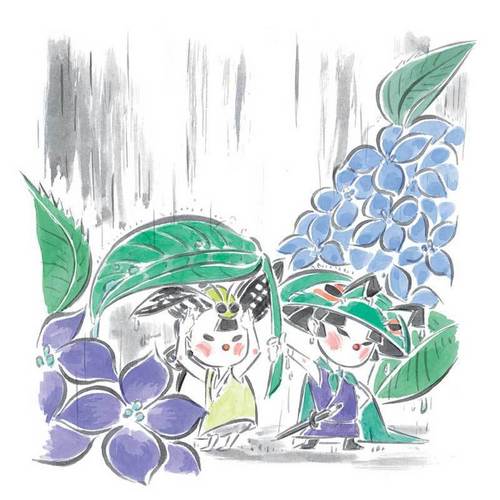 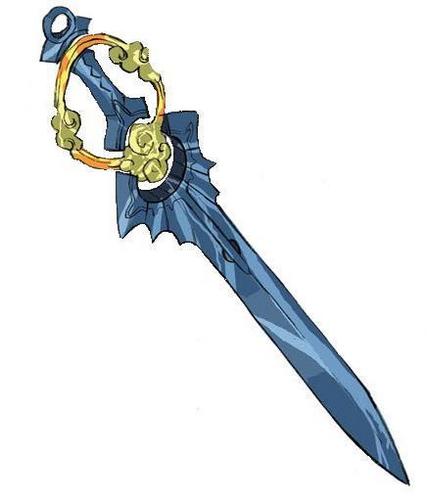 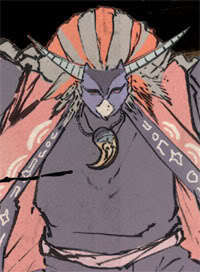 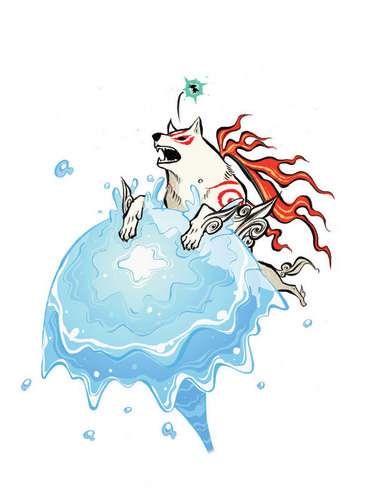