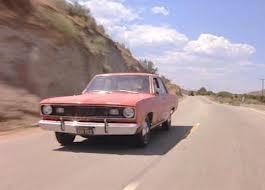 Pinkie drove off to go into the badlands to get the ingredients that she was told to get. 50 minutes later she got behind a big rig carrying gasoline. It was going very slow, and the smoke was causing Pinkie to cough.

Pinkie: Why so slow? *coughs*

After 20 seconds Pinkie drove past the big rig.

Pinkie: *listening to radio*
radio announcer: Now, up next is Frankie Nylon & The Colts with Why Do Foals Fall In Love
big rig driver: *drives past Pinkie nearly hitting her*
Pinkie: HEY!

Once again the big rig was behind Pinkie Pie going 30 miles an hour.

Pinkie Pie left the gas station, while the big rig was there. But ten minutes later, the truck was tailgating her.

Pinkie Pie: You wanna pass? *signals trucker to pass*
trucker: *passes then goes slow*
Pinkie Pie: Come on, I gave you the road, why don't you use it?

They passed a sign that said two lane traffic. Pinkie could now pass the truck.

While this continued Pinkie Pie missed her chance to pass the trucker.

But 15 minutes later, things wouldn't go the way she thought they would. The trucker returned.

Across the street is a restaurant, so Pinkie decides to chow down.

Pinkie Pie enters the restaurant, and soon meets the manager

Manager: Hello
Pinkie Pie: Hi
Manager: What happened out there?
Pinkie Pie: A pony driving a big rig tried to kill me.
manager: Really?
Pinkie Pie: yeah *sits down at table*
Waiter: Can I get you anything?
Pinkie Pie: Just a cupcake. *looks out window & spots truck*
Waiter: Anything else?
Pinkie Pie: a water, and do you have any asperine?
Waiter: Coming right up.

Waiter: Here you go.
Pinkie Pie: Thanks. *eats cupcake* Ok which one is the trucker, and what do I say to him?

Thinking about which pony was the trucker, Pinkie finished her cupcake, then drank the water. She then decided to go towards an orange stallion, eating a sandwich.

Pinkie Pie then saw that the pony was telling the truth, as he drove off in a PMC 3000 series. She then left the restaurant, and was stopped by a bus driver.

After trying to push the bus with her car, Pinkie eventually got the bumper stuck under the bus. Just like the driver said would not happen.
Colt 6: Mr, she got the car stuck.
Bus Driver: Oh great.
Pinkie Pie: Well it got stuck.
Bus Driver: I'm sorry I could have sworn you would have pushed the bus.

While getting the bumper out from under the bus, Pinkie then saw something that scared her. THE TRUCK!

While Pinkie was driving away from the big rig, it was pushing the bus. After helping the bus start up, the pony driving the big rig went back to chasing Pinkie Pie.

After evading the big rig once again Pinkie had to stop a railroad crossing, and watched as the train passed her.

The big rig kept pushing Pinkie Pie's car closer to the crossing until the end of the train arrived. Pinkie then drove off the road letting the truck pass.

After nearly getting killed again Pinkie Pie decided to drive slow, and avoid the truck, but that didn't work out. She saw the truck in front of her, and decided to stop at a gas station.

Pinkie Pie left the gas station without paying, and did not get her new radiator hose. She decided to hide from the trucker, and her plan worked. The big rig drove past, while the driver did not notice Pinkie's car.

Pinkie Pie: The highway is all your's pal. I'm going to wait here for an hour, and the police will get you. Even if they don't, I'll be far away from you. I can't wait to get back home, then I'll be back with Mr. & Mrs. Cake with Pound, and Pumpkin. One of them will be bound to ask me, "Hi Pinkie Pie, did you have a nice trip?" I just want to get those ingredients, and go home.

Eventually Pinkie Pie fell asleep, and after 65 minutes she heard a horn. She thought it was the trucker, but it was a train passing by her.

She watched the train, and when it passed she drove off. Then she saw the big rig.

Pinkie then went in reverse off the road. She got out of her car, and stopped two ponies driving on the road

Pony 1: What is it ma'am?
Pinkie Pie: The pony in that big rig is trying to kill me. I need your help!
Pony 2: This mare is crazy.
Pony 1: What do you need our help with?
Pinkie Pie: I need you to go call the cops, and tell them that a pony driving a big rig is trying to kill another pony driving a hoofington.
Pony 2: I'm telling you this mare is crazy!
Trucker: *drives toward other ponies*
Pony 1: Get away from us!
Pinkie Pie: I just want you to make a phone call to the cops!
Pony 2: Mike look out!
Pony 1: *drives backward*
Trucker: *returns to position by road*

After the big rig nearly hit the other ponies Pinkie had it. She had this pony run her off the road, pushed her toward a train, and almost killed her just because she was making a phone call. Now it was all down to this.

After half a minute Pinkie spotted a police car.

This was it. There was no way the truck could keep up with Pinkie Pie going up hill, but the radiator hose on Pinkie's car overheated

Her speed was slowing down, and the truck was slowly catching up to her. She then got to the top, and was cruising downhill.

Pinkie decided to go up another hill. She turned, but it was too late, and she hit a mountain.

Pinkie Pie watched as the truck drove over the edge of the cliff, and when it hit the bottom it blew up.

After getting rid of somepony that tried to kill her for no reason. Pinkie Pie sat there sleeping. As she woke up the sun was setting, and she realised that she had no way to get back into Ponyville. That was fine though, because she didn't want to go back just yet. She wanted to see the sunset, then when it got dark she would make her way back. 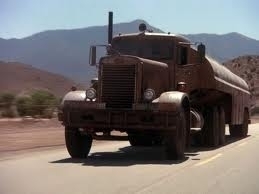 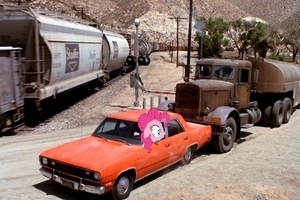 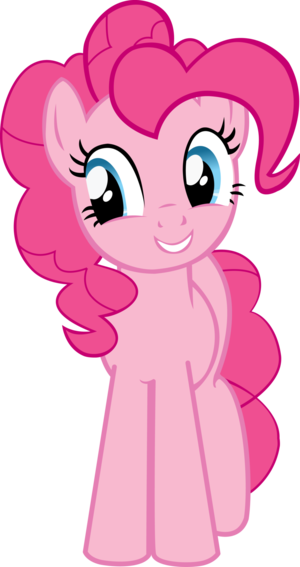 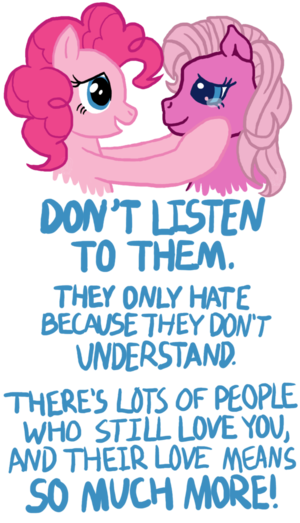 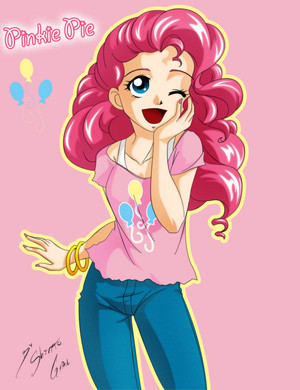 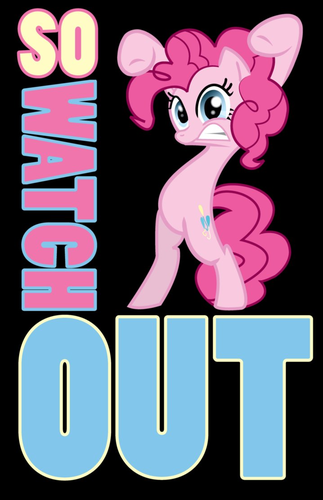 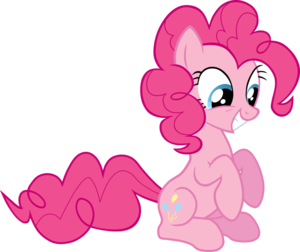 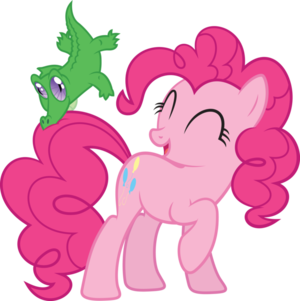 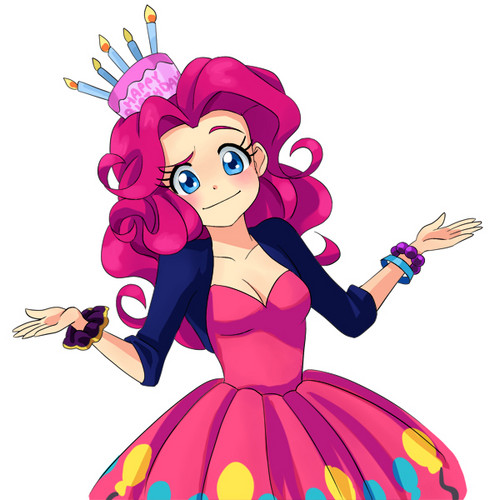 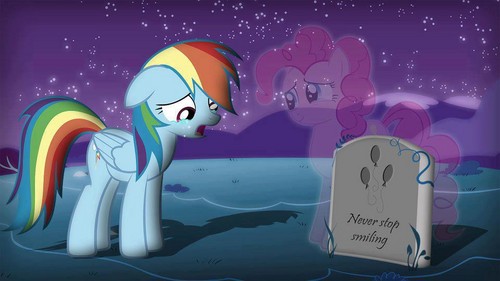 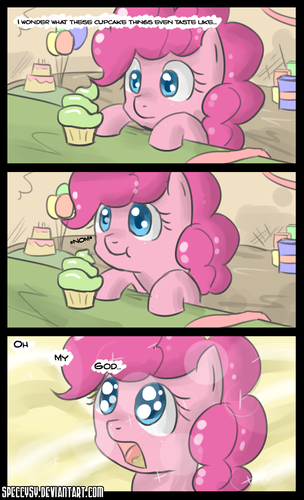 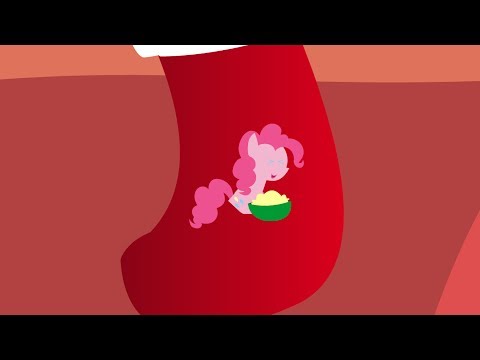 1
Twas The Night Before Pinkie
added by Seanthehedgehog
Where did you get popcorn?
video
pinkie
pie
pinkie pie
music
songs
random 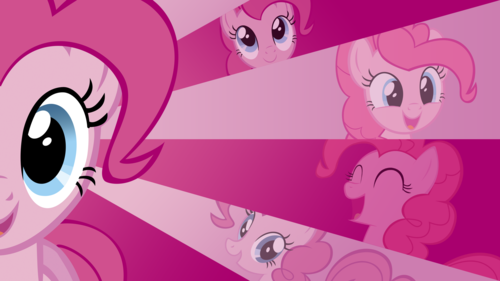 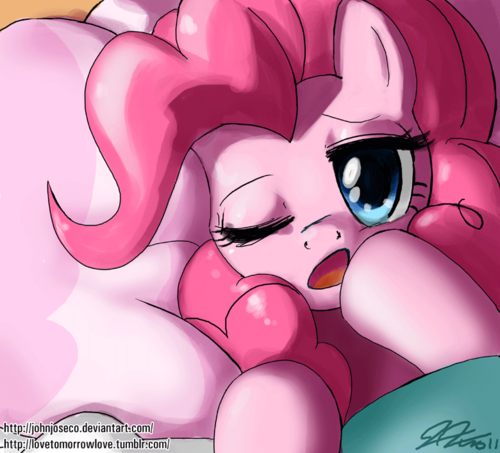 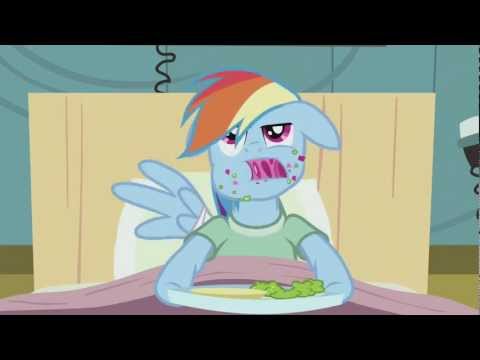 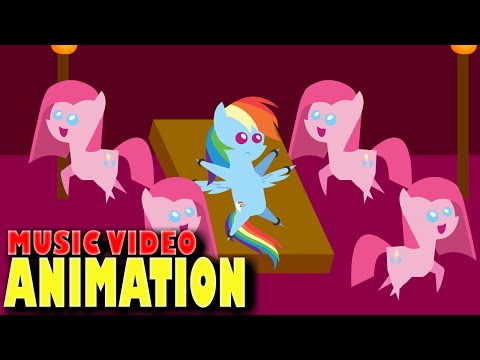 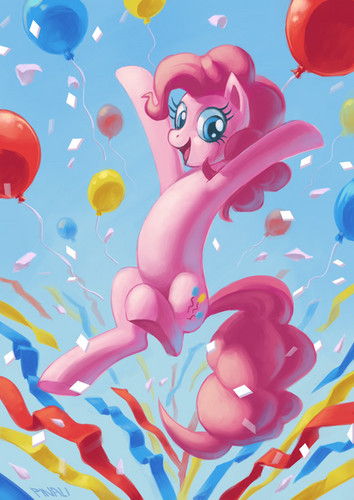 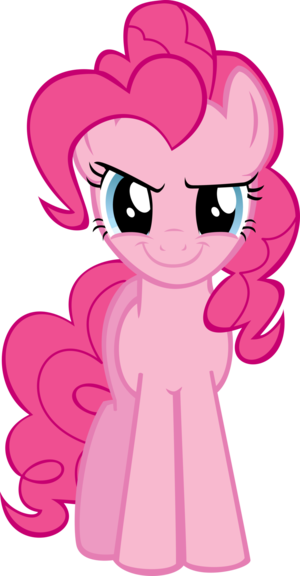