2
Maggie Lawson Leaving the Psych?????
posted by ratava123
GOODBYE JULIET?
As Psych fans might have heard, Maggie Lawson has been tapped to star in an ABC comedy pilot. But what does this mean for Psych and/or Juliet? Let’s just say it’s too soon to sweat.
“We’re so happy and excited for Maggie having all of these opportunities, and we never want to begrudge somebody who has an opportunity star in their own show — especially in something that’s a big project like this,” executive producer Steve Franks tells me.
Additionally, dozens of pilots are made every season with only a few getting picked up for full seasons. And if that happens, says...
continue reading...
3
Crazy 'Mr. Yin' theories
posted by housefrk
Since everyone is so adamant that no one will guess the cliffhanger, I've come up with some crazy theories of my own. Prepare to lolz.


Shawn inherits a candy factory and moves to Poland

Shawn and Lassiter find out they are related

Shawn and Juliet find out they are related *dies*

Santa Barbara is overtaken in a zombie apocalypse

The chief is pregnant…with Lassiter 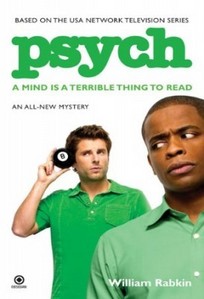 A Mind Is A Terrible Thing To Read
Hey Psych-os!!!
Don't know if you have heard about this, but recently(2009)a book series came out based on the USA Network television series. Books in the series include:

They are all written by American television producer and writer(and author) William Rabkin.

It is not the same as watching the show, but it is entertaining to read since he is so spot on with Shawn and Gus's personality.

I have only read 'A mind is a terrible thing to read,' but so far it has been worth Amazons $8 price.

Highly recommended for all Psych fans!!!

(The one i am reading currently takes place before Shawn and Juliette get together)
9
What I think about Shawn and Juliet.
posted by Dadog5
So I think Shawn and Juliet are just cute together!
I'm sure most of you agree.
But! Some think Shawn and Abigail are good together. To tell the truth, I don't think so.
You can tell Juliet likes Shawn, Shawn probably knows it, but for some reason refuses to accept it.
I don't know what's going to happen between the two of 'em. But in the episode, " Death Is In The Air " at the end of it, Shawn almost tells Juliet he likes her! And I think Juliet knew what he was going to say. But I guess I wouldn't mind if the writers don't put the two together or do something more with what's between them.
I am willing to wait, but NOT TO LONG! ;)
Like say the second episode of season 5, yea I can wait till then.
1
Abigail
posted by lemonly0010
well as some of you psych fans know, the ending of the season when they bring in Ying.you saw that psych saved Abagail and Juliet.And then in the end when Abigail DUMPS Shawn because she doesn't like almost dying. well it's my opinion that that was VERY stupid! like Shawn just saved her from dying, she should be happy she has a boy friend that will protect her.He went through all this drama to be dumped at the end! WHAT THE HECK! I felt sooo sad for Shawn, he loved her and only got to see her for a while when she finally came back from that place and then he spend like 2 or 3 minutes under water trying to untie her so she can stay alive and then she dumps him. Abigail must have been on drugs or something!!!!!!! well thats my opinion! comment to tell me yours!
thanks for reading.
Lemonly0010.
4
Be a Fan of the Program Participate in the forum while you can.
posted by Councilman
I have put up a couple of topics on the forum with little and or no response. I am a huge fan of the show and I see things wrong during just about every episode. It's like a game to me. What does Shawn see or do that may not be exactly right. Or I question why the writers make Gus so negative all the darn time. When he's not negative he's like a little girl running away screaming over the sight of a dead body. I don't post these things because I don't like the show. Quit the opposite. I post to try too stimulate discussion in the Show.

I'd like to see some real fans out there participate in the forum and play the mistake game.

I'm going to keep pushing buttons, so keep in mind I'm not complaining about the Show except for the way writers have made Gus a poor friend.
6
'Romeo and Juliet and Juliet'
posted by Blueeyes99 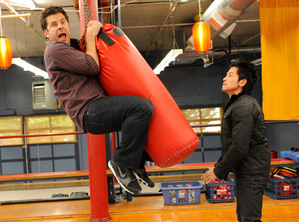 Psych is back with an action packed new episode entitled, “Romeo and Juliet and Juliet”.

Shawn and Gus find themselves caught between two rival Chinese Triad gangs as they search for a powerful businessman’s abducted daughter.

Shawn and Gus shine in this episode, Shawn trying to get into a Karate class that is for 8-year-olds was just one of the many hilarious moments. Juliet, still shaken from last seasons ‘Mr. Yin presents…”, is working at city hall, and won’t admit that she is still quite scared, but in the end she saves the day, and Shawn.

All in all, perfect season opener for season 5!
2
Ying comes back
posted by lemonly0010
Okay so i am sure some of you have seen the episode of Psych, when Ying comes back. Well. I personally LOVE the fact that Shawn and Juliet are dating now!! And in that episode my opinion is, well i have a boyfriend so i was wondering. If you were Juliet wouldn't you be screaming at Shawn for letting Yang out to "help" I mean, She is in a big white room with EXTRA special help because of what she did. What made Shawn think that she wouldn't pull something when he let her alone into the house. REALLY!? I mean i know it is for business but...He put Juliet in deep danger just like he did with his...
continue reading...
1
A Very Juliet Episode
posted by DramaQueen1020
I just realized something. You know the episode 'A Very Juliet Episode"? The one where Jules sees her college sweetheart Scott?
Well remember the part where they had to find the bullet in the spruce tree? Since 5 years had passed since the bullet was fired the tree grew, and so the bullet got farther from the ground. By actually, trees don't grow like humans or flowers. As a human grows, their legs get longer, thus making them taller. But trees grow from the top, so it's as if their heads get longer throughout their lifespan. So a knot or a branch in the middle of the tree would be in the same...
continue reading...
2
how would you feel
posted by lemonly0010
now we all should have seen the episode of psych when Shawn got shot. now when i just looked at the title of the episode i almost cried... i thought Shawn was going to die, but gladly he didn't! and then i remembered the part were he got away from the guy and saw this you know shop. so he went over to it and the guy just knocks him out! then when Shawn was in the place strapped to a chair and he was just shooting his mouth off (talking alot) and then the guy that knocked him out just takes his gun and puts it right to Shawns neck!!!!!!! now my heart was beating. will he die or not! i didnt know yet but all the guy did was tell Shawn how easy it would be for him to put a bullet through his head! and Shawn shut up. so the reason i wrote this article was to ask you at the end, should that have been the last episode of psych... and should Shawn have died? who knows... just leave a comment telling me your answers to my questions thanks guys the opinion is on you!
You Might Also Like...