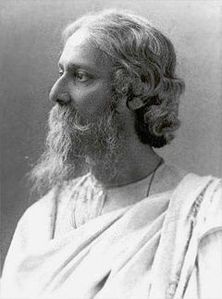 Kabiguru Rabindranath
Rabindranath Tagore was born in Calcutta, India into a wealthy Brahmin family. After a brief stay in England (1878) to attempt to study law, he returned to India, and instead pursued a career as a writer, playwright, songwriter, poet, philosopher and educator. During the first 51 years of his life he achieved some success in the Calcutta area of India where he was born and raised with his many stories, songs and plays. His short stories were published monthly in a friend's magazine and he even played the lead role in a few of the public performances of his plays. Otherwise, he was little known outside of the Calcutta area, and not known at all outside of India.
The Tagores tried to combine traditional Indian culture with Western ideas; all the children contributed significantly to Bengali literature and culture. However, in My Reminiscences Tagore mentions that it was not until the age of ten when he started to use socks and shoes. And servants beat the children regularly. Tagore, the youngest, started to compose poems at the age of eight. Tagore's first book, a collection of poems, appeared when he was 17; it was published by Tagore's friend who wanted to surprise him.
Tagore was the first Indian to bring an element of psychological realism to his novels. Among his early major prose works are CHOCHER BALI (1903, Eyesore) and NASHTANIR (1901, The Broken Nest), published first serially. Between 1891 and 1895 he published forty-four short stories in Bengali periodical, most of them in the monthly journal Sadhana.
Tagore's reputation as a writer was established in the United States and in England after the publication of GITANJALI: SONG OFFERINGS, about divine and human love. The poems were translated into English by the author himself. In the introduction from 1912 William Butler Yates wrote: "These lyrics - which are in the original, my Indians tell me, full of subtlety of rhythm, of untranslatable delicacies of colour, of metrical invention - display in their thought a world I have dreamed of all my life long." Tagore's poems were also praised by Ezra Pound, and drew the attention of the Nobel Prize committee. "There is in him the stillness of nature. The poems do not seem to have been produced by storm or by ignition, but seem to show the normal habit of his mind. He is at one with nature, and finds no contradictions. And this is in sharp contrast with the Western mode, where man must be shown attempting to master nature if we are to have "great drama." (Ezra Pound in Fortnightly Review, 1 March 1913) However, Tagore also experimented with poetic forms and these works have lost much in translations into other languages.
In 1901 Tagore founded a school outside Calcutta, Visva-Bharati, which was dedicated to emerging Western and Indian philosophy and education. It become a university in 1921. He produced poems, novels, stories, a history of India, textbooks, and treatises on pedagogy. Tagore's wife died in 1902, next year one of his daughters died, and in 1907 Tagore lost his younger son.