2
I'm sorry for loving you - part 1
posted by Persona

Naomi looked at them, with a surprise look. "Is it really Kaito?" She thought to herself.
She was transferred to this school just about a week ago. The class president, Kaito helped her a lot. She always thought he was nice and kind. But now...
She stared at him. Kaito was glaring at a girl, who's a friend of hers, Hikari.

"Hey, Hikari, is there anyone in this school that you like?" Naomi asked. "Well.... there is one...," Hikari said as she blushed. "Who?" Naomi asked again. "Umm..." Hikari looked away. "Naomi!" Saki yelled. "Sorry, you don't have to answer that if you don't want to," Naomi apologized. "No... it's not that I don't want to tell you, it's just that....." Hikari looked at Naomi. "Hey, it's cool," Naomi said. They both smiled. "We know who it is! It's-" Takuma teased. Fuka hit his head. "OUCH!" Takuma moaned. Yahiko signed and reached into his bag. He took out an ice bag and gave it to Takuma. "Thanks," Takuma said as he took the bag and put it on his head. Everyone laughed.
Hikari looked the other side. "Oh! There's Sakura. I need to tell her something. See you later," Hikari stood up and picked up her juice cup. "Sakura-chan!!!!" Hikari called out. Sakura waved at her.
On her way to Sakura, Hikari bumped into someone, and her juice spilt on him. "I'm so sorry," she looked at him. It was Kaito. Her eyes became wide. Then she looked down. "I'm really sorry," she looked at him. Kaito glared at her.
Everyone, Naomi, Saki, Takuma, Fuka, Sakura, even Yahiko who always isn't interested in people's matters stared at them.
Hikari bit her lips. "Something's not right," Naomi thought. As she was about to stand to go over to them, Saki stopped her. It was a signal for her not to go. So she sit back, staring at them.
Kaito walked away, bumping Hikari's shoulder. Hikari was still looking down. Then she slowly looked at Kaito's back. Her eyes were filled with tears.
"Hikari! Hurry up!" Sakura called. "Sorry, coming!" Hikari ran to Sakura.
"Kaito... it was just if he was changed into another person. What happened between him and Hikari?" Naomi asked.
The rest of them looked at each other and nodded. "Since you've become one of us, we'll tell you," Saki started. Naomi nodded. "Hikari and Kaito were friends when they were young. You could say that he was one of us. We used to play together. Kaito loved Hikari. And Hikari loved Kaito too. And she still love him," Saki signed. "Kaito lived with his grandparents since he was little, and that's because his parents died. Also, Hikari grew up without a mother. Maybe that's why they became close friends quickly," Takuma looked up. "Ok, anyway, back to the main topic, Kaito's parents died because of Hikari's father. It was a car accident. Both Hikari and Kaito didn't know about that. But when Kaito found out, he ended their friendship," Fuka said. "And Hikari hoped that they will become friends again just like they were once. She tried to apologize many times, but Kaito is just a hard-head and childish, I mean it was Hikari's dad who hit his parents, not Hikari," Yahiko looked away.
"Hearing that, I feel like crying. I want to help them," Naomi said. "Do you think we didn't do anything? Of course, we tried to help. But everytime we tried to help, Hikari just ended up crying. So we don't want to do anything anymore," Yahiko signed.
"Why does she give a damn about that guy?" he added. "Ahh, someone's jealous," Takuma said as he pressed the ice bag on his head. Yahiko blushed and swifted away the ice bag from Takuma's hand and put it in his bag. "That's what you get for teasing others," Fuka stated. "I've already told you, Takuma. I want Hikari to be happy," Yahiko said as he looked away. "Even if it means to let her go to Kaito....." he thought. 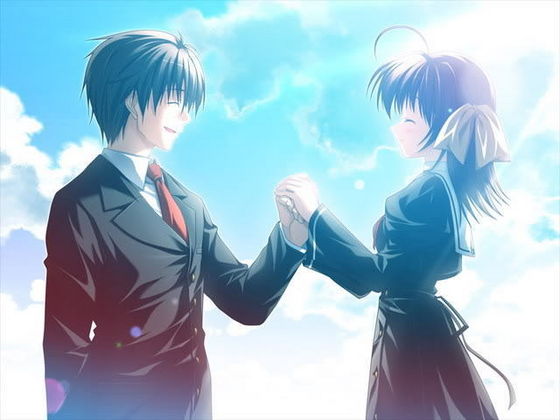 Yuuki_Himura and demon_wolf like this
Persona I kinda suck at writing, but i did my best on this one. Hope you guys like it.....
alucard768 i like it its good =3
Persona Thanks. I didn't actually think that anyone would like my story.
Hinata1994 That's really nice. I'm waiting for part 2! ^^
demon_wolf That was nice. ^^

Kaito walked out of the gym door. "I thought I told you that I don't want to see her cry. And it's not just me, all of us don't want to see her cry. But why do you keep hurting her?" someone said to him.
Kaito didn't give an answer, he just stared at him. "Let's talk, Kaito," he said. "I'm not in a mood to talk, Yahiko," Kaito said as he started walking. Yahiko walked, following Kaito. "What? Maybe Hikari's confession affect you in someway?" Yahiko said. Kaito stopped walking and signed. He leaned on the wall, "What did you want to talk about,...
continue reading...

-------Night-------
"You've done a great job today, Kaito," Mizuka said to Kaito as they walk through the girls' dorm hall. She checked the bedrooms, one by one. Mizuka is the headmistress but she also teach maths. "Ah... I've got a headache since this morning. This is the second last room. So I'll leave the last room to you since I know you won't do anything.....well, silly. I really need to go to bed now," she said. "Yes, ma'am," Kaito said and Mizuka left.
Kaito walked to the last room. He took a deep breath and open the door. He checked the...
continue reading...
2
I'm sorry for loving you - part 4 (the last part)
posted by Persona

"Please.... why can't the bell just ring?!?!" Fuka thought. The bell rang and Mizuka went out. Saki, Fuka, Takuma, Yahiko and even Kaito stood beside Naomi as she opened the envelope. There was a letter inside. Naomi read out loud.
"I'm sorry, guys. I hope you can forgive me. I had to lie to you. I'm feel ashamed trying to run away instead of facing it. But I guess it's just me. Anyway, Saki, you are a great friend. You helped me a lot and I appreciate that. Fuka, I really like you because you call a spade,a spade. People says that you're a hard-head,...
continue reading...