2
I'm sorry for loving you - part 3
posted by Persona

Kaito walked out of the gym door. "I thought I told you that I don't want to see her cry. And it's not just me, all of us don't want to see her cry. But why do you keep hurting her?" someone said to him.
Kaito didn't give an answer, he just stared at him. "Let's talk, Kaito," he said. "I'm not in a mood to talk, Yahiko," Kaito said as he started walking. Yahiko walked, following Kaito. "What? Maybe Hikari's confession affect you in someway?" Yahiko said. Kaito stopped walking and signed. He leaned on the wall, "What did you want to talk about, Yahiko?" he asked. Yahiko smirked. "About Hikari," he said. "There's nothing to talk about her," Kaito said. "Are you sure?" Yahiko asked, staring at Kaito.
"Look, if you love her so much, why don't you just try to win her instead of talking to me?" Kaito asked. "Well, I could. But I want her to be happy. That's why I didn't tell her my feelings. I thought she'd be happy with you," he said. "..........No...she won't be. I'll...just end up......hurting her," Kaito said. "Then try not to hurt her," Yahiko stared at him. Kaito didn't say a word. "You know, Hikari told me a story about a boy and a girl once," Yahiko started. Kaito looked at him. "In that story, the boy had a bird and he loved it very much. The boy and the girl played together since they were little. Her father was a hunter. One day, the hunter accidently shot the bird. The boy cried and cried. From that day on, he hated the father. He wanted revenge for his bird, which was the only family he had after his parents died. His hatred for her father became bigger and bigger, he wanted to hurt her father. So he hurt the girl, well, not physically. The girl had feelings for him. So it was more easy for him to hurt her. The girl cried and cried, hurting the father. At the end, he realized that he was not only just hurting her and her father, but also himself since he loves her too. He just didn't know it until the end. Hikari said it's her most favorite story," Yahiko looked down.
"So you're saying that I'm hurting her to hurt her father?" Kaito asked. "Maybe. But if you're really doing that, then it won't be working. She and her father, they hate each other a lot. You two were best friends, so you should know. Seeing her crying, her father would be really happy and laughing like hell. So just stop it," Yahiko started walking. "I don't really expect you to change right away. But think about it. Good night, Kaito," Yahiko said as he walked away.

------The next morning------
"Hikari, wake up, it's 6 o' clock," Saki said. "Um...Ah.. Oh..Saki.. Umm...," Hikari moaned. "Hey, you don't look so well. Are you sick?" Saki said as she put her hand on Hikari's forehead. "It's a little hot," Saki said. "Is she sick?" Fuka asked. "I think so," Saki answered. "You should stay in bed. I'll inform the nurse. Don't worry about school. We'll fill you in," Naomi smiled. "Thanks, Saki, Fuka, Naomi," Hikari said softly. After a while, Saki and Fuka left.
"It's not really bad. Just take this medicine, and you'll get better," the nurse gave Hikari the medicine and a water glass. "Thank you," Hikari said and took the medicine. "It's my job," the nurse smiled. "Now, rest," she added. Hikari lied down and the nurse left. She closed her eyes and she was slowly drifted away to sleep.

------Lunch time------
"Hey, where's Hikari?" Takuma asked. "She wasn't well, so we told her to rest,"Naomi said. Yahiko glanced at Kaito who was sitting at the table beside them. They stared each other. Kaito signed stood up and walked away. Yahiko smiled. "Why are you smiling, Yahiko?" Saki asked. "Nothing," Yahiko said.
Kaito walked through the hall to the girls' dorm. He stood in front of the door. He signed and opened the door. He looked over the bed near the window. He looked at Hikari. He sat on the chair beside her bed. He touched her red hair. "Sorry, Hikari for everything. Maybe Yahiko was right, maybe I was hurting you to hurt your father. But you've got nothing to do with it. I'm really sorry," he said softly and signed. "I'm such a coward. I don't have the courage to tell you that I'm sorry or that I love you," he whispered. Then he looked outside the window. He heard a bell ring. It was the school bell. He signed and walked to the door, "Hope you get better," he whispered and went out of the room.
Hikari opened her eyes and got up, "umm...," she signed. "It's just a dream...," she pulled her knees to her chest. "A dream. Yeah, definitely a dream....," she signed again. "Kaito..........," she whispered.

------Evening------
"......that's all that the teacher taught today," Naomi said. "Thanks," Hikari smiled. "But what the teacher taught today won't be needed for me anymore," she thought. "Tomorrow's saturday. So, I'm gonna go back to my home since I need to pick up some stuff tonight," Hikari said. "But your father....," Yahiko started. "I'll ignore him and he'll ignore me too," Hikari smiled. "Ok, but will you be alright alone?" Takuma asked. "I'm not a child," Hikari said. "No, I mean, you weren't well this morning. So will you be alright going alone?" Takuma asked again. Hikari smiled. "Ok, then," Takuma smiled.
Hikari dressed up. Fuka, Saki and Naomi looked at her. "Don't worry about me," Hikari said. "Just be careful," Fuka said. Hikari smiled. "Good Bye, guys," she said and walked away. "She sound weird," Saki stated. "Hope everything's alright," Naomi signed. "Yeah..," Fuka agreed.
Hikari walked out of the school. "Hey, don't do anything stupid," someone said from her behind. Hikari turned to see him, then she smiled. "Don't worry, nothing stupid, just the right thing. See you, Yahiko," she waved and walked away from the school.
------The next Monday-----
"Hey, Hikari didn't come back last night. Do you think that she and her dad got into something huge?" Naomi said. "If they got into something huge, Hikari would come right back to the dorm. She wouldn't stay at her house," Saki said. They sat in the class. "Where's Hikari?" Takuma asked. "We'd like to know that too," Fuka said.
Mizuka came in. "Miss, Hikari didn't come back yesterday," Naomi said. "Um... didn't she told you that she was going away?" she asked. "What?!?!?!?!?!" all three girls shouted. "Well, maybe she forgot," Mizuka said. "But-" Naomi said. "Where did she go?" Kaito asked. They all stared at Kaito. "Well, she says she's gonna go to America or something...," Mizuka said. "Oh, almost forgot. She asked me to give you all this," she said as she handed an envelope to Naomi. "Now, did you do your homework assignments?" 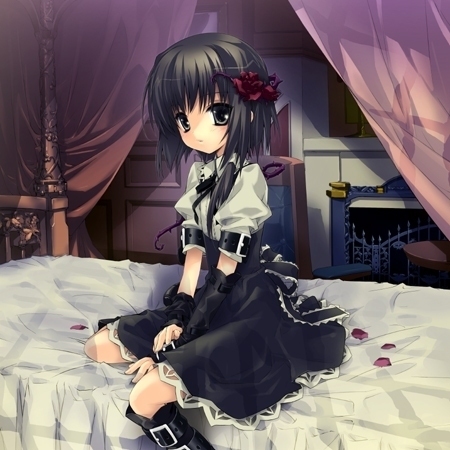 Yuuki_Himura and demon_wolf like this
alucard768 nice but she left are they going to get her
Hinata1994 That's nice, but did she have to go?
demon_wolf A few errors again but it was really good. I can't wait to see why she left and if her friends will go after her. =DD
Rules
posted by vampyrechick
1. No personal attacks.

2. No fighting off of the RPs.

3. No picks made about other people.

4. In an RP, you may not make decisions for other characters.

5. In an RP, you may not kill, hurt, or heal, another character without their permission(either ask in OOC or attempt the action and let them respond accordingly)

6. in an RP, you may not put mythical charaters in a "normal" RP.

7. in an RP, unless you created the RP you may not progress farther in the set storyline unless it is by a very small measure.(see The Water Glows Red for an example).


Please respect these rules to keep this spot from turning out like "role-playing with others" did.. i'm sure ToastedRabbits was not happy with the result of all our actions there, and i don't want my spot to end up the same way.

EDIT: originally i typed "molting cracks" for some reason when i meant "The Water Glows Red" no idea where my head was lol.

1
Demon_wolf's RP characters
added by demon_wolf
Legend of the Fullmetal ninja
posted by ethonia
On the planet crom, a bloody war has been waged for 3 centuries. The warring sides are the ninja and the imperials
The ninja are losing this war. However, the ninja strongly believe that a warrior from another world made almost entirely of metal will come to defeat the imperials and bring about peace.
Meanwhile, on Earth, the year is 2277, it's basically a utopia and a young high school student is about to learn of his destiny as the Fullmetal ninja on crom. He had been in an accident 3 years replaceing his right arm and his heart with metal.
What happens next is entirely up to how the rp goes
Will accept 6 characters (excluding mine) max
For now, post their profiles and I'll put the profile format and the characters I've already chosen in the describtion
2
My Daily Life
posted by Persona

What do you do when you wake up? That's a very good question! What do I do? Of course, I wash my face then brush my teeth. "I wash my face 'BEFORE' I brush my teeth, not 'AFTER'." What's the difference?
Some people brush their teeth 'Before' they wash their face. That's wrong, well, at least I heard it's wrong.
Teeth have to stay in our mouth all night. Wait.. it's not surprising since teeth always have to stay in the mouth.. ahh.. nevermind.
Because of teeth have to stay in our mouth all night, when...
continue reading...
2
I'm sorry for loving you - part 1
posted by Persona

Naomi looked at them, with a surprise look. "Is it really Kaito?" She thought to herself.
She was transferred to this school just about a week ago. The class president, Kaito helped her a lot. She always thought he was nice and kind. But now...
She stared at him. Kaito was glaring at a girl, who's a friend of hers, Hikari.

-------Night-------
"You've done a great job today, Kaito," Mizuka said to Kaito as they walk through the girls' dorm hall. She checked the bedrooms, one by one. Mizuka is the headmistress but she also teach maths. "Ah... I've got a headache since this morning. This is the second last room. So I'll leave the last room to you since I know you won't do anything.....well, silly. I really need to go to bed now," she said. "Yes, ma'am," Kaito said and Mizuka left.
Kaito walked to the last room. He took a deep breath and open the door. He checked the...
continue reading...
2
I'm sorry for loving you - part 4 (the last part)
posted by Persona

"Please.... why can't the bell just ring?!?!" Fuka thought. The bell rang and Mizuka went out. Saki, Fuka, Takuma, Yahiko and even Kaito stood beside Naomi as she opened the envelope. There was a letter inside. Naomi read out loud.
"I'm sorry, guys. I hope you can forgive me. I had to lie to you. I'm feel ashamed trying to run away instead of facing it. But I guess it's just me. Anyway, Saki, you are a great friend. You helped me a lot and I appreciate that. Fuka, I really like you because you call a spade,a spade. People says that you're a hard-head,...
continue reading...