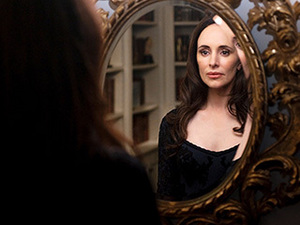 REFLECTION Who is that girl I see staring straight back at me? Anyone but my mother!
Episode 08 | Aired Nov 25, 2012


Party like it's 2006! Emily meets Aiden for the first time, details about Victoria’s past emerge, and The Stowaway is still being blackmailed. Some things never change.
By Tara Fowler at EW

'm still recovering from Thursday night's food coma, so let's get right to it, Revenge-ers. It's 2006 and Aiden’s sporting a bow tie and a bad Russian accent (see also: an unfortunate mustache). Emily struts up to the bar in a gorgeous LBD and asks for Sergei. Aiden, charmer that he is, mistakes her for an escort and directs her to the VIP area where we meet… Ashley! We knew Emily had met Ashley before the saga of the Hamptons, but who could have predicted that our posh girl was working as a, well, working girl? Ashley’s having second thoughts about offering herself up to a shady Russian character known as Dmitri, but thankfully (it is Thanksgiving after all!) Emily’s to the rescue! She trades places with Ashley, agreeing to sub (or do I mean dom?) for her.

Elsewhere in the Revenge-verse, Daniel (complete with bad haircut) is back from Harvard for a family Thanksgiving and -- surprise! He’s invited his long lost grandmother Marion to dinner without telling Mom. Oops. Marion informs her daughter Victoria that her stepfather Maxwell passed almost a year ago and she’s got a new beau named Ben, whom she’s also invited to the Graysons’. At the mention of Maxwell, we’re treated to a flashback within a flashback (how meta, Revenge!), where we learn that Marion married Maxwell for the money. Very Titanic. At The Stowaway, Carl Porter tries to get Jack and Declan to leave for Thanksgiving at Grandma’s even though Jack’s already got the turkey thawing. I try not to yawn. Meanwhile, a younger and less jaded Nolan makes the announcement that Nolcorp is going public.

Back at the Russian club, Emily meets up with Takeda, who asks her if she’s afraid to carry out her mission. “No, I’m ready,” she replies coolly. In the Hamptons, Daniel drops a bomb on Conrad: he may not major in business. Conrad’s not too fazed. He’ll settle for poli-sci or pre-law as well. However, Daniel’s going in a completely different direction. He wants to be a poet. You can practically smell Conrad’s disgust, as though being a poet were comparable to being a trash collector.

Victoria and Marion have a heart-to-heart about Marion’s man of the minute. She insists it’s different this time -- Ben is “a man of class and means. Much like Conrad.” Umm… If there’s any romance you don’t want to compare your relationship to, it’s Victoria and Conrad’s. Marion wants Victoria to treat Ben respectfully. “Do not disappoint me,” she intones ominously. (Was anyone reminded of Alan Rickman’s answering machine on Family Guy at that line? If you don’t know what I’m talking about, I urge you to watch the clip.) In yet another flashback within a flashback, we get a look at a dinner between Marion, Maxwell, and Victoria. “What are you, 25?” Maxwell asks a teenage Victoria. Readers, that’s when I got my first shiver of the night. I knew Victoria’s past was dark, but I never imagined something like this.

Emily returns to the Russian club. Aiden the mustachioed bartender tries to convince her otherwise, but she cannot be swayed (granted, he has no inkling of her revenge plans). Dressed entirely in white, Emily offers herself up in place of her roommate (i.e. Ashley) in order to get a private session with Dmitri. Aiden looks on before crouching down to retrieve a gun from the fridge. Once again, he tries to get Emily to leave, but she just stands there while Aiden pulls his gun on Dmitri. Turns out this nefarious Russian stereotype is responsible for the death (or is it merely the disappearance?) of his sister. He fires, but Emily knocks Aiden out of the way and the bullet goes astray (why yes, that rhymed).

Dmitri, being the gentleman that he is, escorts Emily to a private room. Any of Dmitri’s suspicions are soothed by Ems’ innocent act (the white helps). Dimitri’s putty in her hands, leaving her unattended while he heads off to see to business (meaning torture). Emily ignores Takeda’s pleas to stick to the plan and plots a way to rescue Aiden.

Back at Nolcorp, Nolan calls his CFO Marco in for a private Thanksgiving dinner in his office. Marco gifts Nolan with a Galaxy Defender and I am officially a bigger fan of this couple than I ever was of Nolan and Padma. (Nolan’s really got a thing for his CFOs, huh?) At the Graysons’, Marion is telling Victoria about how she met Ben. They fell in love on a cruise she was supposed to go on with Maxwell (it seemed a waste to not use the tickets). Victoria notes that the encounter sounds almost too good to be true. I should have known right then that something was up, but it slipped by me. How about you?

As an aside, I have to note how much I loved Victoria this episode. It was nice to see her from a whole new perspective; namely the spurned child. Victoria’s so cold all the time -- understandably so, particularly after what we saw later this episode -- but her showdown with her mother brought some heat to her character. Here’s hoping Marion makes a return in the present. Also, can I just point out that ABC has quite the theme of evil mothers going on Sunday nights? Between Cora on Once Upon a Time and Marion on Revenge, it’s a wonder any viewers still speak to their moms.

Jack stumbles across Carl holding a gun, but before he can figure out what exactly his father planned to do with it, someone throws a Molotov cocktail into the bar. The Stowaway cannot catch a break. Meanwhile, Dimitri’s having a grand ol’ time beating up Aiden. Emily crawls through the vents a la Aliens, then makes her way into the Red Room of Pain once the Russians have left. Emily’s desperate to get to the bottom of Aiden’s involvement in the terrorist attack pinned on David Clarke, and she’s not disappointed. Aiden’s father worked as a baggage handler and was most likely the one who planted the bomb onboard. The Russians discover Emily in Aiden’s room, but she quickly wipes the floor with all of them.

Something is happening with Carl and The Stowaway, but I could honestly not tell you what. It’s just more of the same. Really, how many shady deals and blackmail schemes can one bar endure? Jack should consider burning it to the ground and starting anew. At Nolcorp, Nolan’s playing with his new robot toy when Marco steps out to take a call. He returns looking perturbed -- a half a billion dollars is missing. But of course Nolan knows exactly where it is.

The Graysons finally sit down to enjoy Thanksgiving dinner. Conrad promises Daniel that he’ll send his son’s poetry to some publishers he knows and this naïve and badly coiffed version of Daniel believes him. Victoria ruins the good will by bringing up her last Thanksgiving with Marion. V’s mom begs her daughter not to say anything, but when Ben the new beau explicitly asks to hear it, there’s nothing she can do. And what a story it is. Victoria’s father tried to walk out on her mother, so Marion shot him and then framed her own daughter for the crime. Gobble, gobble, everyone! The grand jury failed to indict her, but that didn’t stop a judge from sentencing Victoria to an inpatient evaluation. When she got out, it was only to be sexually assaulted by Maxwell, her mother’s new conquest. And you thought your Thanksgiving dinners were awkward. It would seem our Victoria has a lot more in common with Emily than at first blush.

Emily beats people up in time to strobe lights while Aiden chases after Dmitri and shoots him in the leg. Emily and Takeda arrive just in time to keep Aiden from killing Dmitri, but the relief is short-lived. The Russian taunts Aiden with insults about his sister Colleen and Aiden can’t help but fire. Who could blame him?

At Nolcorp, Nolan explains that the company’s missing money was set aside in an account for David Clarke’s daughter. Marco disapproves of Nolan’s methods, so Nolan fires him (and they presumably end their relationship). Nolan has given up everything for Emily -- I hope to one day see her make a sacrifice for him.

Victoria sends her mother packing, then heads up to her room where Conrad’s washing down his pumpkin pie with a good poetry burning. That’s right! Instead of sending Daniel’s poetry to the publishers like he promised he would, he’s using it for charcoal. Victoria asks if it’s any good, and in answer Conrad reads aloud. Here’s a sample: “How fierce we were when we were young, when we were unafraid of coming unhinged.” I cannot tell you whether this is actually good poetry or not, but according to Revenge, it is. It doesn’t matter, though. Conrad says he’ll arrange for his publisher buddies to send rejections to Daniel and get him back on the fast track to Grayson Global. Oh, and one more thing: Conrad wired the money to Ben. Wait, what? Yes, Revenge-ers, it appears the entire Thanksgiving debacle was a revenge of Victoria’s very own. Girl’s got style.

Carl brings some money to one Joe Ryan, but Joe gets shot by a dock worker friend of Carl’s before the deal goes down. I’m assuming Joe’s related to the modern-day Kenny Ryan, but in what capacity, I’m not quite sure. Jack hears the shot and goes to investigate, but Carl insists it was just a backfire. Poor Jack. He’s tangled up in Kenny’s own revenge ploy without even knowing why.

Aiden finds a picture of Emily’s father and says that he doesn’t want any family to suffer the way his did. Readers, we have a new member at Revenge School! Flashforward to present day, where Aiden and Emily are basking in the afterglow of their lovemaking. “You better not disappear on me again,” Emily says. “I won’t, Amanda,” he replies. Famous last words. Could Aiden be the body on the Amanda? I hope not. He’s one of the only people who knows Emily for who she really is. (Did you see her reaction to him calling her by her real name? Sigh.) It’d be a pity for her to be completely cut off from that. Meanwhile, present-day Daniel -- business tycoon extraordinaire -- gives Marco the former CFO a call and asks him if he’d be willing to meet. I suspect the time for Emily’s sacrifice for Nolan is nearer than we all may think. The episode closes with Emily busting out her conspiracy box for Aiden -- and we know she doesn’t just do that for anybody. Careful with your heart, Ems. I’m starting to think it might get broken.

All credit goes to EW.com
carolynnvarner, lauraxoxo and 1 other like this 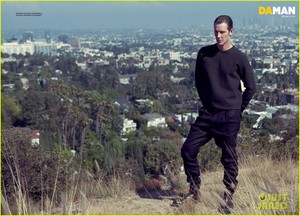 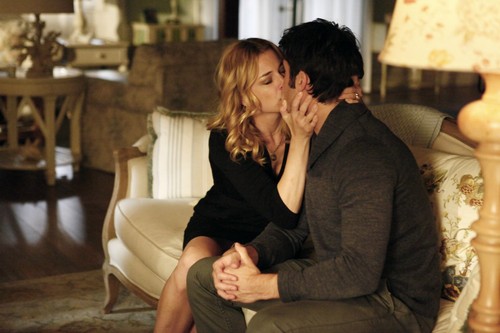 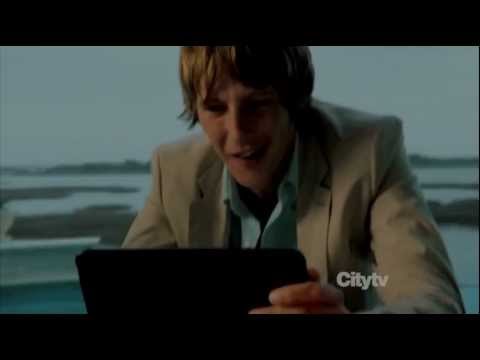 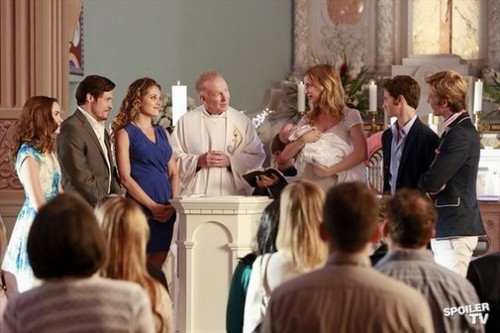 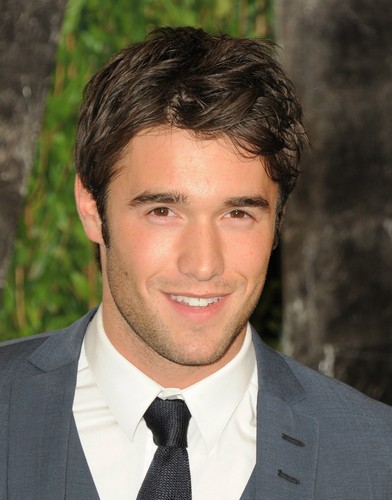 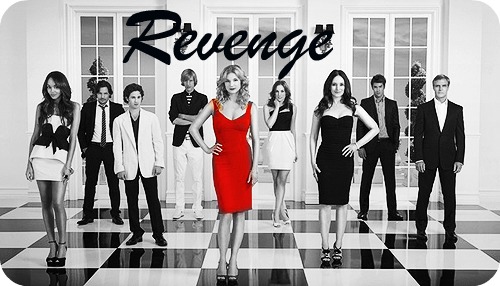 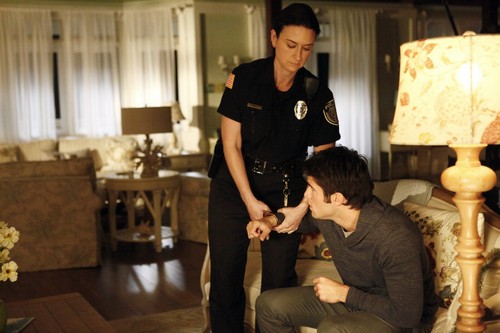 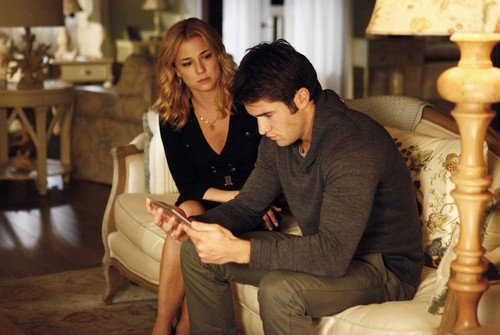 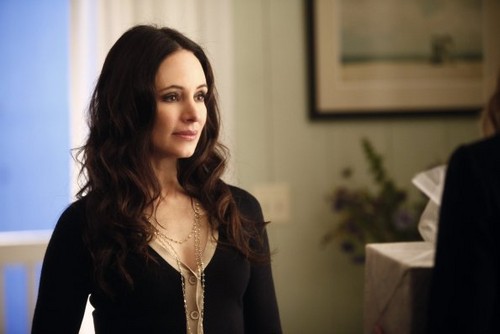 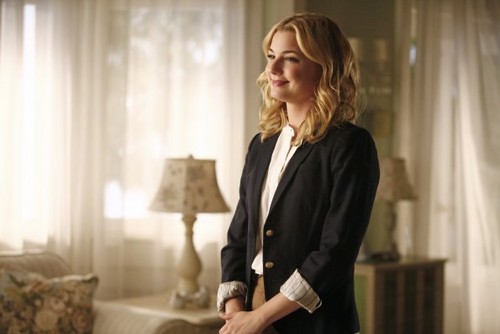 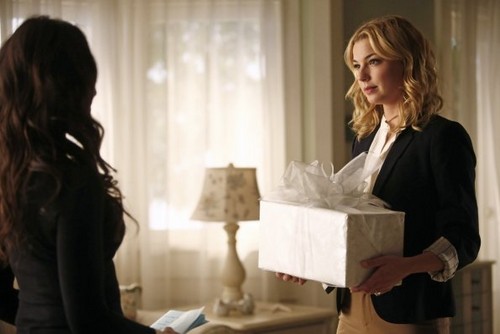 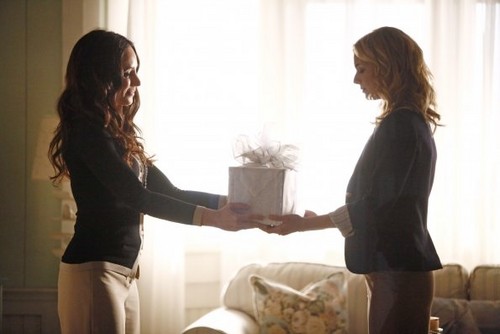 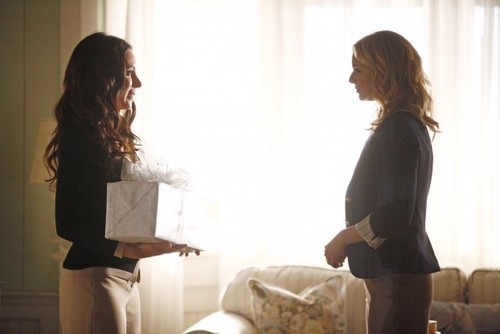 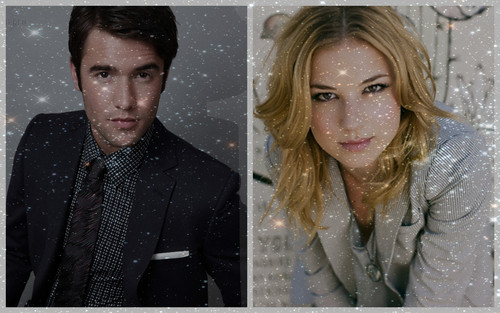 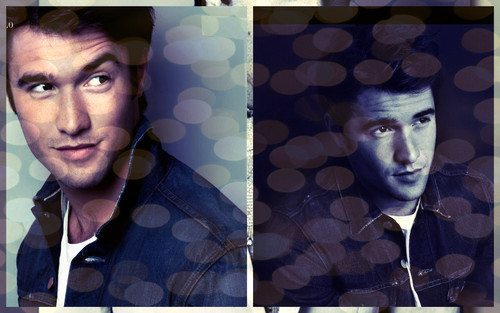 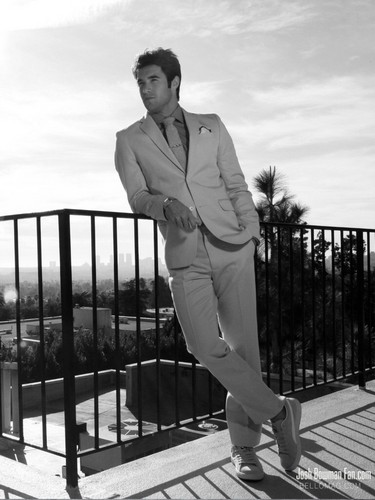 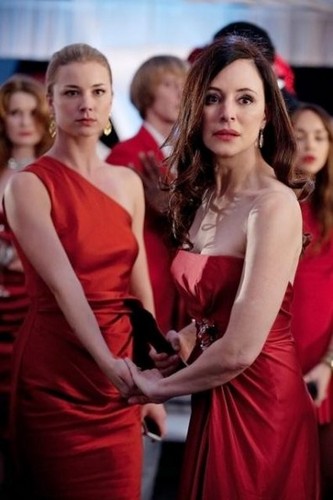 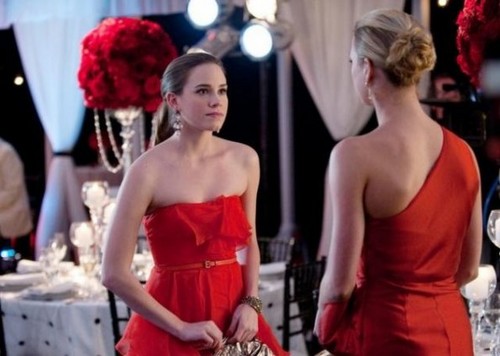