1
Annabeth Chase and the Olympians. The book from my point of view III
posted by fencingrocks
"I'm the head counselor of the Athena cabin," Katie said. I guessed that she was about 16 years old. I had noticed black string necklaces around all the campers necks with various amounts of beads, each with a different design on the beads. Katie's had 6 beads on it. Well, I mean I notice weird things.
"Uh," for the first time in a while, I was speechless.
I looked around the room. There were kids of various ages sitting at tables in the middle of the cabin. They all had blonde hair and gray eyes. Just like me. But they were all working on something on blue sheets of paper. All of the bunks were jammed into a corner.
"Sorry for the mess in here Annabeth," Katie said as she took my stuff which consisted of a few orange Camp Half-blood t-shirts that Luke had given me, and my tooth brush from the camp store.
She set my stuff down on an empty open bunk. I got situated after a few minutes. I was just sitting there, when a girl came over. She was maybe a year or two older than me.
"Hi. My name is Suzy. What's your name?" she said. She almost sounded to happy.
"Annabeth," I said in a very small voice I never really knew I had.
"Oh. Well that's a weird name."
I'm really glad this girl was modest. Or not.

Anyway, those were my first few days at Camp Half-Blood.
A few months ago Grover, the same saytr that had saved me, sent an iris-message to Chiron saying that he had found a new demi-god in a New York City boarding school, Yancy School. Apparently that school specializes with kids that have "mental issues". That's what mortals think ADHD is. They should talk to me and see if I have a "mental disorder". OK back on topic.
Most half bloods have ADHD and dyslexia. They have ADHD because it is their natural battle reflexes to stay alive. they notice every single little detail when their fighting. Dyslexia because their brain is hard-wired for Ancient Greek thanks to their Greek parent.
Anyway, Chiron went down to New York City to take the place as one of the demi-gods teachers. Chiron disguised his half-horse body. into a wheelchair. He wore a knit coat and a blanket over his legs. He let his long hair down and let it hang over his shoulders.
"Annabeth. How do I look?" Chiron asked jokingly. We had always had a great relationship because he practically raised me.
"Like any other Latin teacher," I said as a smile crept across my face.

A few months later, Chiron rushed into the Big House. He was out of his wheel chair.
"Hades. Found Percy," Chiron huffed. My heart jumped into my throat. Great the God of the Dead was trying to kill a poor kid that barely knew he was a demi-god. Wow who ever his parent was must've done something to piss Hades off pretty bad.
"Is he coming?" I asked, hoping that he would be the one that this prophecy is about.
"Of course. There's no place on Heaven or earth now that Hades has found him," Chiron huffed still recovering.
I prevented myself from asking Chiron if he is the one. I knew that every time there was a new half blood, I asked Chiron if they were the one. I was aware that it must be getting irritating.
It was almost time for me to head back to my cabin, when there was a loud crash outside the gate.
"What the....." Mr. D said.
There were a few minutes of silent tension waiting. There were occasional grunts and screams from right near Thalia's tree. I couldn't let another half blood become some sort of nature.
"Chiron. I need to get him," I said.
Chiron grabbed my arm.
"No. If he's going to make it, he has to learn to fight his own battles," Chiron said in a very stern voice.
Just as I was about to protest, a boy about my age stumbled through the gates carrying at lump on his back. As he got closer, I realized that lump was Grover. That took me by surprise because saytr's aren't the lightest things in the world.
As soon as he reached the porch of the Big House he fell. I tried to catch him but his head fell to to the floor faster than I had time to react.
Chiron rushed to his side.
"He's the one. He has to be'" I said almost positive. Judging by the Minotaur's horn in his hand, he was no prissy.
"Silence Annabeth. He is still conscious," Chiron said as he shooed me away.
Natbr likes this
percabeth1000 cool post ps frist comment 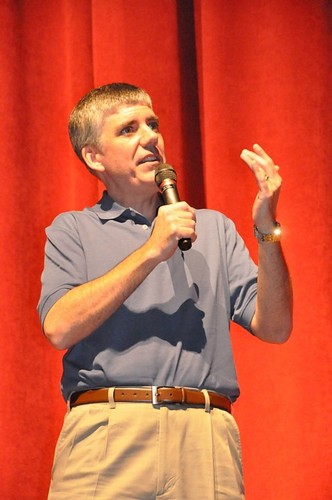 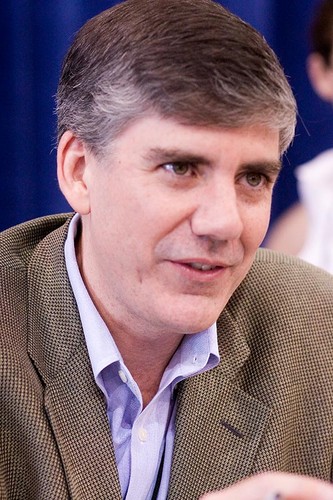 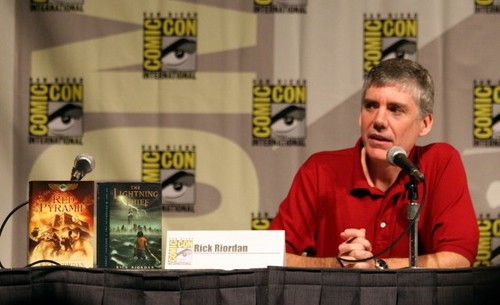 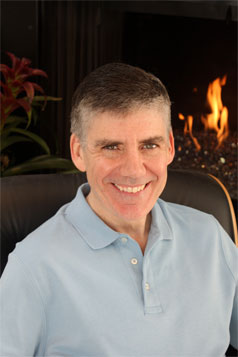 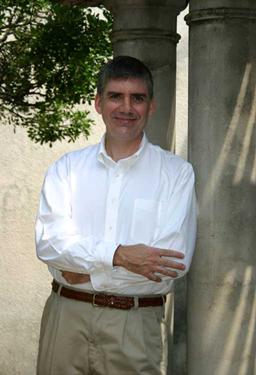 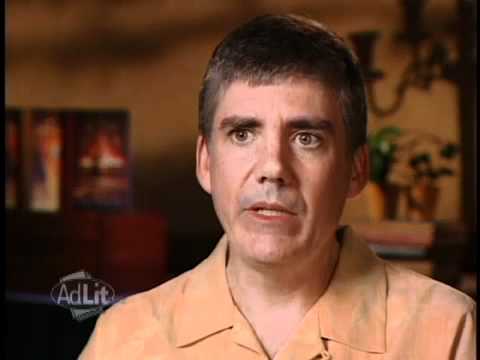 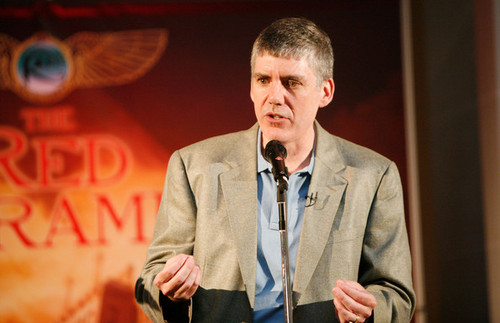 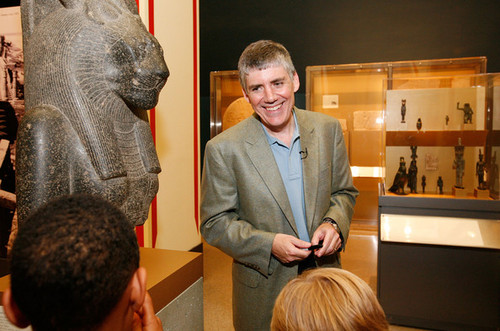 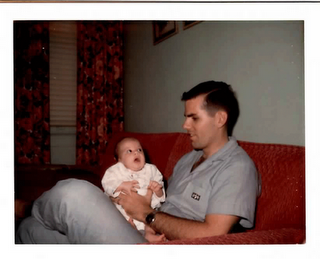 1
baby rick with his dad
added by bluecementicing 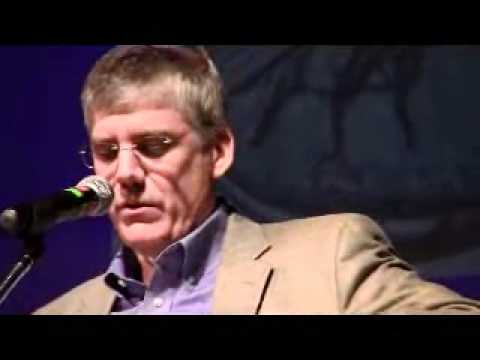 Mark of Athena : First Chapter
added by harry816
Rick Riordan reads the first chapter of Mark of Athena !
video
rick riordan
mark of athena
3
Annabeth Chase and the Olympians. The book from my point of view VI
posted by fencingrocks
I had to restrain myself form slapping him.

"Wait what?" I could tell I was making this kid confused.

I just rolled my eyes. and kept walking. How could I think he could be the one?

Oops, i guess I had said that out loud.

"What's your problem? All I know is that I killed some bull guy thin-' Percy started to say. I knew this wasn't going to be pretty.

"Don't talk like that! Do you know how many campers would die to have that chance?" I was starting to get annoyed. If theres one thing you should know about me is that I hate being wrong, and I especially hate it when people doubt...
continue reading...
1
Annabeth Chase and the Olympians. The book from my point of view V
posted by fencingrocks
Chiron was taking Percy on a tour of the camp. I knew this was going to take a while, judging on the fact that Percy was completely clueless. I looked up from my book. I saw Chiron and Percy come around the corner. Percy had the same blank expression most new demigods had. They were absorbing all the information because they don't know how to react. Percy asked Chiron a few questions, that Chiron quickly answered.

"Annabeth, I have archery class this afternoon. Will you show Percy his bunk?" Chiron said as he trotted around.

"Sure," I muttered. I wanted this to be fast so I could get back to...
continue reading...
1
Annabeth Chase and the Olympians. The book from my point of view IV
posted by fencingrocks
I ran inside to get Will Solace. He was one of the best healers at the Camp. Will and I had grown up together at camp so we were pretty close. I ran into the infirmary. I scanned the room, looking for Will's shaggy brown hair. I found him, pressing a cool rag on Jake Mason's head. Jake Mason was in the infirmary a lot because he was a son of the fire god Hephaestus, and so he played with fire, a lot. I walked over to the side of Jake's bed.
"Will. Percy, he's here. But the Minotaur-"I said. I only got to there because Will was already at the door with his medical bag.
When we got Percy up on...
continue reading...
1
Annabeth Chase and the Olympians. The book from my point of view
posted by fencingrocks
My name is Annabeth Chase. Before you get started reading I would just like to tell you that if at any point during this book you fell like this has happened to you, stop reading. Put the book down and forget you ever started reading. Anyways this is completely fantasy.

Well, I'm thirteen years old. I'm the daughter of the Greek goddess Athena, Goddess of wisdom. That makes me a half-blood. There is thousands of half-blood worldwide. Some lead normal lives and others train to become warriors at Camp Half-Blood on Long Island New York. I've been going to that camp since I was about 7 years old....
continue reading...
3
Spot rules (sorry, the name is an insult to creativity)
posted by HecateA

Do not worry, I am trying to find an icon. I am doing my best to have one up, but my computer will not co-operate!

And yes, this banner isn`t great. I`m working on it.

Anyways, this spot needs rules so things are nice and nobody gets hurt.

1. Play nice. Common, nobody likes a bully and the fact people can`t see your face or don`t know your name doesn`t make it different. By "play nice", I mean no rude comments, no mean comments to anyone, no racism, the basics. Usually the rule "If your grandma would hit you when you say that, then don`t say it" applies.