20
Songs for Romione
posted by shieldmaiden 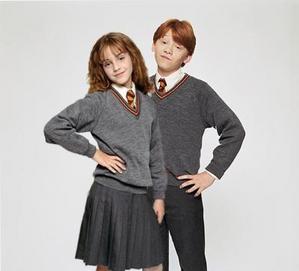 Whenever I listen to the radio, I am always connecting songs back to Harry Potter in some way or another. My favorite ones that I connect though are the ones that remind me of Romione. This is because it gives me such a great feeling because honestly, their love is pretty much the best. Okay okay Jim and Pam from The Office are pretty darn close too! Anyways, I felt like sharing some of the songs that remind me of Romione and why, so here goes!

"Light On" by David Cook: This song reminds me of the Deathly Hallows after Ron leaves Hermione and Harry, and he has to find them again with his Deluminator that Dumbledore left him. Primarily the lyrics "Try to leave a light on when I'm gone/Something I rely on to get home" are particularly relatable because Ron depends on the light of the Deluminator to get him "home" back to Hermione. The rest of the lyrics are very reminiscent of their relationship as well, and you can read the rest of them link.

"Love Story" by Taylor Swift: Okay, I know it's like uber girly and what not, but come on! Don't tell me you can't resist thinking a little bit about Romione when this one comes on! I especially like to think of Harry in the father role, except he's more like the protective brother of Hermione. Like in the lyrics, "And my daddy said stay away from Juliet/And I was crying on the staircase/Begging you please don't go", I could definitely see Harry telling Ron to stay away from Hermione just because of all the pain he put her through, especially in the last two books when Harry really began to notice their love for each other and Ron and Hermione really put each other through a lot. You can read the rest of the lyrics link

"Right Here" by Staind: This is a definite perfect one for the Deathly Hallows scene of Ron's departure from the trio and his travels to return back to them. There's even a wonderful fan video made to this song by Sirrah78 which you can view link. Anyways, onwards to the memorable lyrics! Probably the best lyrics are these, "Why can't you just forgive me/I don't want to relive all the mistakes I've made along the way/But I always find a way to keep you right here waiting/I always find the words to say to keep you right here waiting". It reminds me of when Ron returns after destroying the locket and basically finding out that Harry only loves Hermione in sibling form. Hermione was still absolutely furious at Ron for leaving them that she couldn't forgive him, but she did in the end for both of them always seem to find the words to keep the other holding on to the hope that in the end, they will end up together. And thank you Rowling for letting them! You can read the lyrics in their entirety link.

"Love Remains the Same" by Gavin Rossdale: This one has some pretty awesome lyrics for Romione. It's perfect for their relationship throughout Deathly Hallows (come to think of it, a lot of songs are) just because I think quite a few of the lyrics really describe what they went through. Take for instance these: "Half the time the world is ending
Truth is I am done pretending
I never thought that I
Had anymore to give
You're pushing me so far
Here I am without you
Drink to all that we have lost
Mistakes we have made
Everything will change
But love remains the same" Seriously though, through out half of the novels, Voldemort has returned in Book 4 and pretty much wreaks havoc throughout the rest of the novels. Also, they have made many mistakes throughout the years and have hurt each other quite emotionally, and yes everything is going to change in Deathly Hallows (sorry for requoting that ridiculously cheesy line from Hermione in the film of GOF). One more thing to point out in this song. At the beginning of the song in the chorus, it states "Truth is I am done pretending" which when you think about it refers to Ron realizing that "It's now or never" (Deathly Hallows). However, at the climax of the song towards it's end the chorus goes "You and I are done pretending" which always gives me that wonderful image of Hermione running towards Ron and ending up in that penultimate first kiss they have. Oh yes, so wonderful!

"All For You" by Sister Hazel: This one actually cracks me up because it reminds me of when around the third and fourth novels Ron and Hermione really begin to realize that they like each other quite a bit. These lyrics: "It's hard to say what it is I see in you/Wonder if I'll always be with you/Words can't say it, I can't do/Enough to prove, it's all for you" are very easy to connect to Romione. First off, "It's hard to say what it is I see in you" is pretty much a great description of them. They originally start off really disliking each other, especially in the third novel, and for them when they first realized it I'm sure they were wondering, "How could this be?! She's so annoying/He's so frustrating!" The thing is though was that they balance each other out with their personalities and thus, after they realize I'm sure they wondered if it was worth stepping down from their egos. Finally, neither could really do enough to prove that they loved the other until the seventh novel. Ron never was able to step up to the plate as pointed out by Hermione in the fourth novel in their Yule Ball argument and Hermione...well Hermione actually did give it a go, but she got so caught up in her jealousy in the sixth novel that she went out with a guy she despised just to hurt Ron. This song pretty much just sums them up =)

"Forever" by Chris Brown: Shocker! An R&B song that reminds me of them! Wait though, let me show you why! It's primarily just this one verse here: "It's like I've waited my whole life for this one night/It's gonna be me you and the dance floor
'cause we've only got one night/Double your pleasure/Double your fun and dance/Forever on the dance floor". This verse primarily reminds me of the scene in Deathly Hallows when Ron and Hermione dance on the dance floor at Bill and Fleur's wedding. Ron has pretty much waited a long time to do something that proves his love for Hermione, and this was his major first step in that. Plus they only do have one night to have fun, as everything digresses into chaos only a few moments later thanks to Kingsley's Patronus.

"I Won't Say I'm in Love" from Disney's Hercules: This one reminds me mostly of Hermione because she absolutely refuses to admit that she actually likes Ron as more than friends, even though everyone can see it in their sixth year. Pretty much the entire song is something very much like Hermione would say, or at least think in her head. So I absolutely love the beginning of the song: "If there's a prize for rotten judgement/I guess I've already won that". It's pretty funny to think that Hermione was probably second guessing her judgement of Ron as the love of her life, because I mean, she pretty much loathed him for some time. The rest of the song is pretty self explanatory, but the end pretty much sums up Hermione's beliefs on the matter: "At least out loud,/I won't say I'm in love" Because to admit that would equate to admitting defeat in her book.


I definitely have a ton more that I could list and describe for you, but then I would have to turn it into a novel! Please feel free to comment below on what songs remind you of this amazing couple and thanks for taking the time to read! 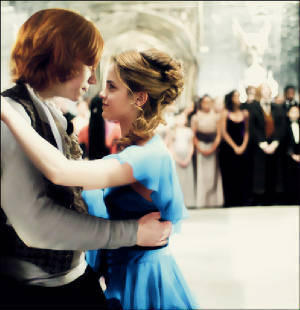 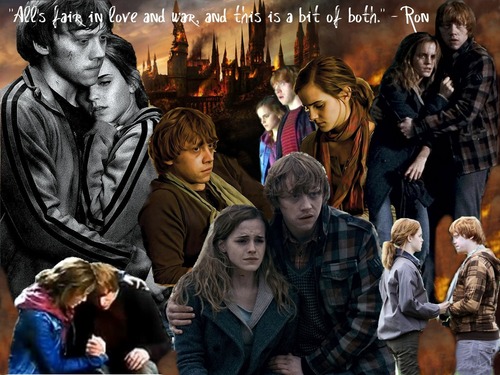 4
Ron and Hermione
added by CrazyBananas95 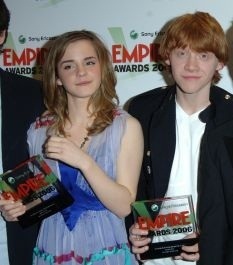 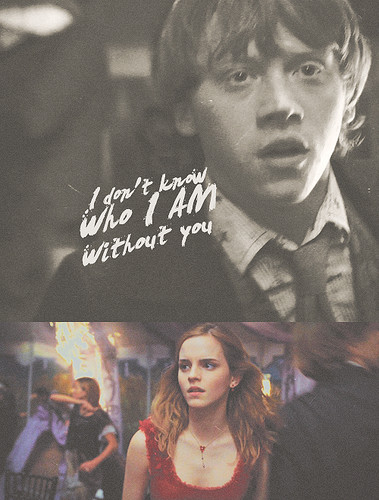 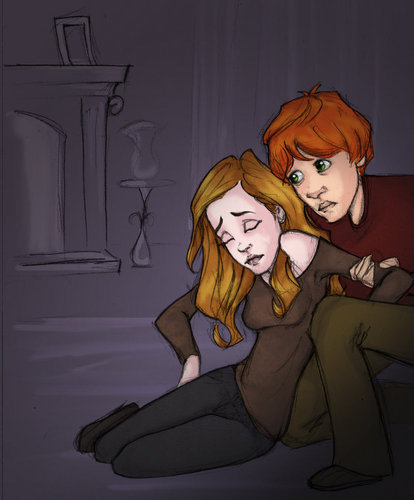 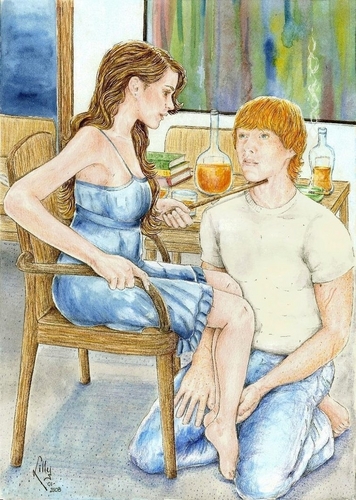 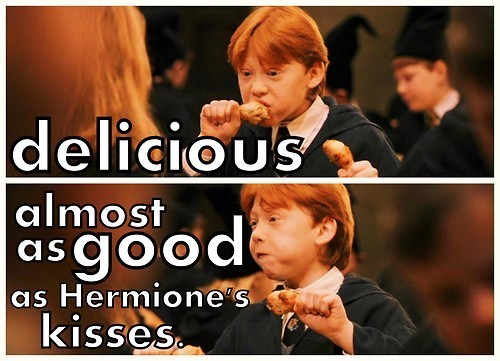 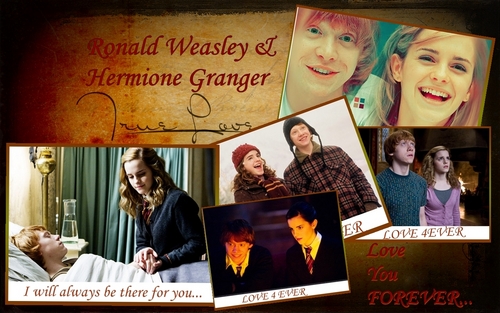 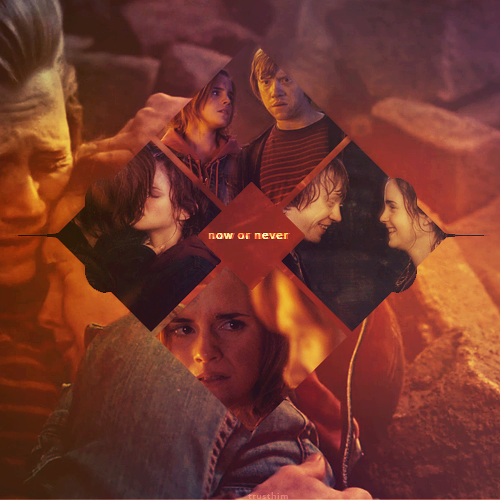 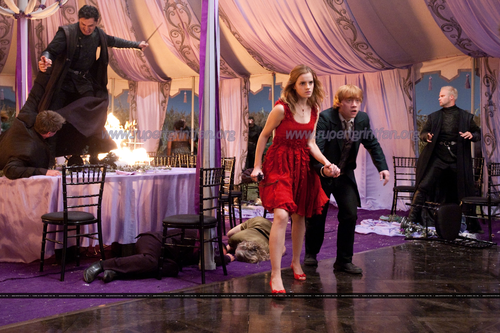 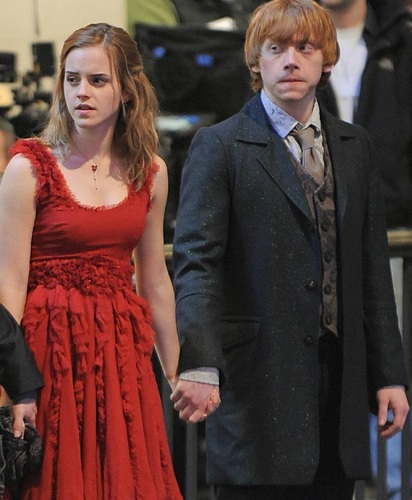 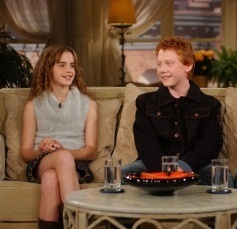 1
Romione - The View
added by Beatit
2
I hate Lavender Brown
posted by ARadomperson
Those are feelings of Hermione in sixth book, after Lavender SNOGGED Ron. I HATED this scene! And you? Well, anywa, enjoy
Hermione's P.O.V
I looked around the empty classroom, gripping the guitar in my hand. Yes, I knew how to play guitar, and right now, I needed a moment of peace. I sat on one of the chairs, and lightly started to play, while singing a song, that just popped out to my mind.

"Ronald Weasley, you're so thick.
The way you look at her, it makes me feel so sick.
Lavender Brown is such a....skank!
Is that really the kind of girl that you appreciate? 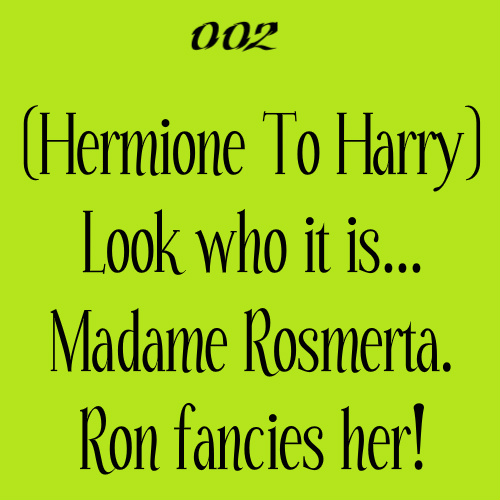 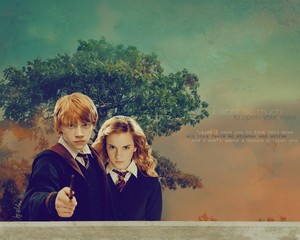 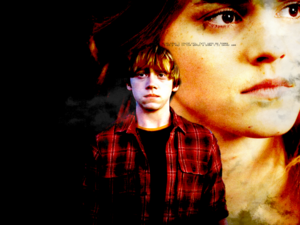