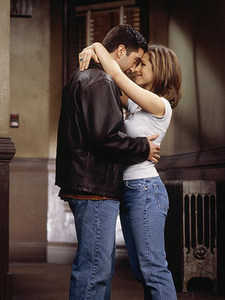 Ross first fell for Rachel when she was a high school friend of Monica. But she thought he was geeky, which he was really, with his stupid moustache and his "music", (which resurfaces in episode ??). On prom night Rachel's date Chip did not show up at first, and Jack Geller convinced his son, (who showed his feelings for Rachel when fumbling with her dress) to take her instead. Ross was all ready, with a tuxedo and a bunch of flowers, when Chip showed up and left with Rachel.

In episode 1.1 Rachel once again enters Ross's life after leaving her fiance at the altar. Ross feels insecure asking her out after the length of his relationship with Carol, but decides to do so after Joey's 'grab a spoon' advice. But little things get in the way: Paolo's cat, then Paolo himself during the blackout, then Barry claiming to still be in love with Rachel.

Chandler tells Ross to forget Rachel and move on. Ross gives Chandler his birthday present for Rachel, as he is going to China for several weeks to sort out a "big bone thing".

Rachel finds out from Chandler that Ross loves her in episode 1.24 after she opens his birthday present, and rushes the airport but is too late to stop him leaving. While Ross is in China Rachel can't decide whether to tell Ross when he gets back, and what her feelings for him are. She eventually decides to go to the airport, and is waiting for him with a big bunch of flowers when Ross appears with a woman...

... who turns out to be Julie, an old college friend whom Ross met by chance in China who is now his girlfriend.

Rachel asks Chandler to ask Ross what's going on, and Ross tells Chandler that he's happy with Julie, and that it's only because of Chandler's advice that he even considered going out with her. Chandler lies to Rachel.

Despite his reaction to Paolo's cat, Ross is about to get his own with Julie in episode 2.7. Rachel is dismayed to discover over dinner with her date Michael that they can live for years. Michael tells Rachel that she's feeling bad about Ross because she hasn't had closure, and Rachel's way of getting closure is to get very very drunk and leave this message on Ross' answering machine:

"Ross, hi, it's Rachel. I'm just calling to say that, erm, everything's fine and I'm really happy for you, and your cat (sarcasm), who by the way I think you should name Michael (Michael looks embarrassed). And you know, you see there, I'm thinking of names so obviously I am over you, I - am - over - you, and that my friend is what they call closure."
Ross finds out:

The next morning Rachel can't remember much of the night before until Ross checks his answering machine at the girls' flat and discovers Rachel's feelings for him, prompting the classic exchanges:

"You're over me? When...when...when were you under me?"
and "yeah, so, you had feelings for me first"
Dress Rehearsal:

Rachel is closing up at Central Perk when Ross comes in, angry because he was fine with Julie before he knew about Rachel's feelings, and she's angry with him for not saying how he felt sooner. But after a blazing row, and in one of the most pivotal scenes of the whole series, they kiss.

In episode 2.8 Ross and Rachel describe the kiss to Chandler and Joey and Monica and Phoebe respectively. Ross is now torn between Rachel and Julie. (huh some choice). The kiss also serves as the inspiration for one of Phoebe's greatest songs, Two of Them Kissed Last Night.

Chandler has a new laptop and suggests Ross use it to write a list of pros and cons of Rachel and Julie. Rachel's pros list is a bit nasty it has to be said, but Julie's is just "She's not Rachel."

Ross abandons the list idea and after a lot of deliberation, breaks up with Julie, but Rachel's euphoria is short-lived when Chandler's machine starts printing her cons list. She reads it.

Nothing Ross does makes Rachel forgive him over the list. Even a slinky presented as a gift does nothing to soften her up.

"you fall for me and I get clobbered, I fall for you and I somehow again get clobbered. I'm sick of being clobbered"
Rachel starts going out with Russ, who looks and acts just like Ross, in episode 2.10. Only she and Ross (who naturally can't stand Russ) can see no resemblance.

Ross is diverted by the reappearance of Marcel in episode 2.12, and Rachel dates Jean-Claude Van Damme for a while in episode 2.13, provoking a full-on war with Monica, who saw him first.

Phoebe tries to help in episode 2.14 with an interesting theory about lobsters and how they mate for life. Rachel isn't pleased however when Ross gets rid of her date Casey by pretending to be her blind date, then justifies it by calling her his lobster. Rachel tells Ross their relationship is over, and that he should accept that.

The prom video emerges in episode 2.14 when Jack and Judy bring boxes full of Monica's things from her old room. It reveals to Monica and Rachel what Ross did on prom night. Now Rachel finds Ross irresistible.

Episode 3.15: Rachel thinks they should take a break from each other, after all the Mark business, and Ross sees this as an opportunity to go and have sex with the photocopy girl Chloe. Rachel however decides she's had enough of a break and goes to Ross's flat to get back together with him, unfortunately while Chloe is still there. Ross gets away with it, but later Gunther (who's in love with Rachel himself) tells her about it.

Ross gets a new girlfriend, Bonnie in episode 3.25. Bonnie is an old friend of Phoebe's, and Phoebe had assured Rachel that Bonnie had a bald head. When Bonnie turns out not only to be beautiful but also has a full head of hair, Rachel is jealous. While everyone's on a beach holiday she persuades Bonnie to shave her head again. Ross shows he still loves her when they kiss at the beach house. Ross has to choose again, between Bonnie and Rachel.

Episode 4.1: Ross chooses Rachel and breaks up with Bonnie, But Rachel wants him to read an 18 page document and tell her what he thinks of it before she'll get back with him. Ross falls asleep without reading it, and in the morning pretends to have read it, and so has to guess when Rachel asks him "does it?". His answer is the right one for Rachel, but later when he reads her letter he realises that he's just admitted that he was completely responsible for all the problema in their relationship. Chandler and Joey convince Ross that he should just let it go as he has Rachel now and shouldn't jepardisse their relationship. But in bed, Ross finally snaps:

Ross and Rachel try to make each other jealous in episode 4.5, him with Amanda, who turns out to just want him to babysit her children, and her with Josh, a high school kid who steals from her.

Rachel goes out with a Joshua for a while, starting in episode 4.13, and Ross gets pally with English girl Emily from episode 4.14. Emily's and Ross's relationship quickly starts getting serious, ultimately leading to plans for a wedding in London.

Rachel decides not to go to the wedding and to stay with Phoebe who is pregnant. But she realises she still loves Ross, and goes to London to try to stop the wedding.

A man on Rachel's plane to London (Hugh Laurie) agrees with Ross that they were on a break.

Rachel decides not to tell Ross that she still loves him, but Ross is thrown by her presence in church and says "I take thee Rachel"

Emily and Ross still marry, but after punching him hard for embarrassing her, Emily disappears despite Ross' pleadings, and Ross and Rachel almost go on Ross' honeymoon together in episode 5.1. Emily sees them together at the airport, and this doesn't improve her opinion of Ross, who runs after her, leaving Rachel to go to Athens on her own. 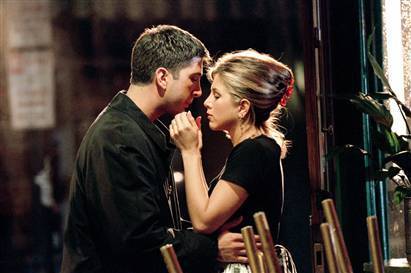 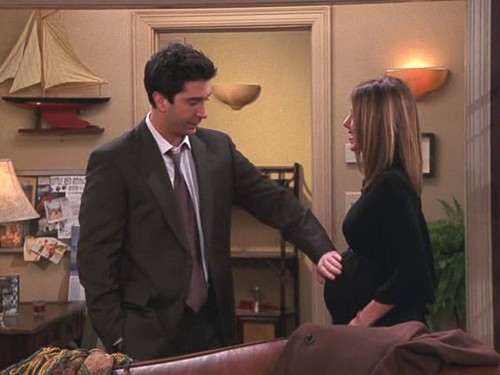 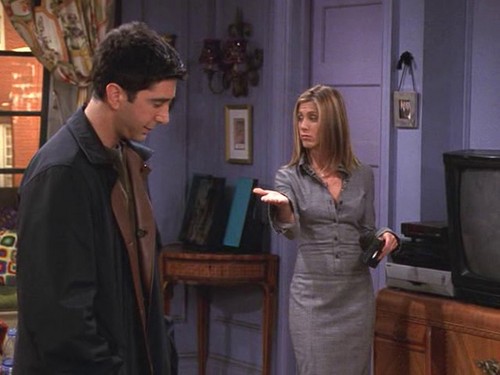 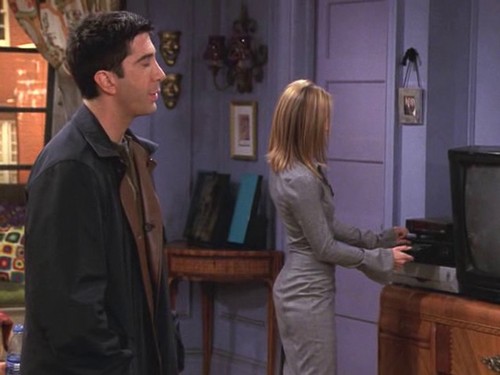 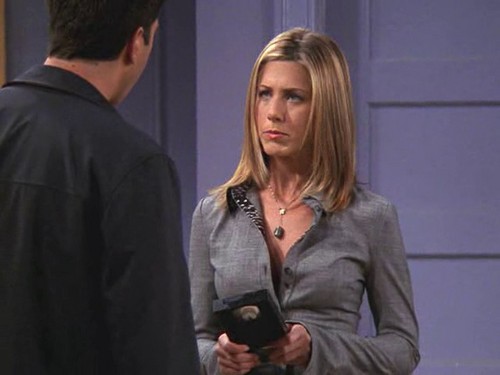 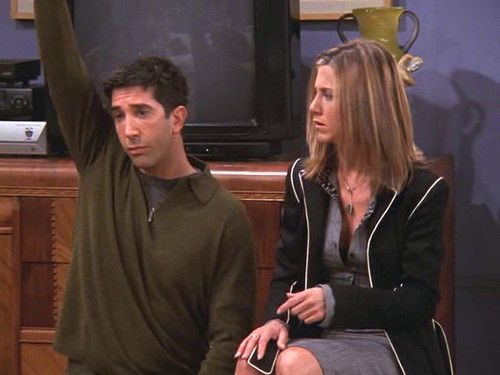 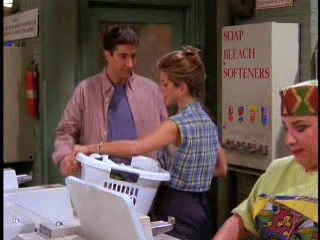 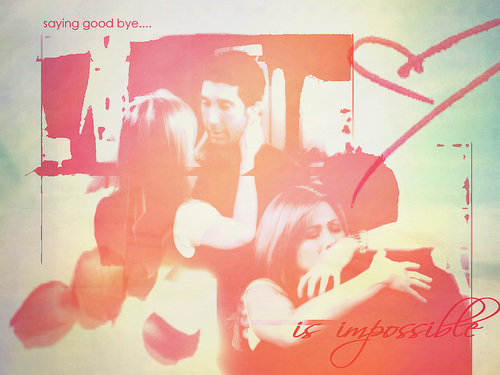 6
Ross and Rachel
added by xsparklex 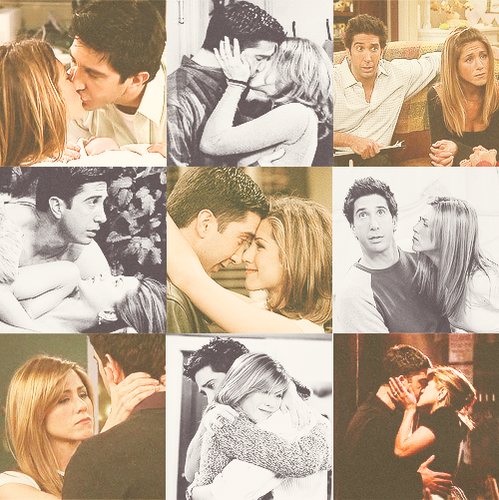 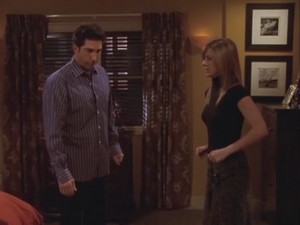 Ross and Rachel
added by RoseLovesJack 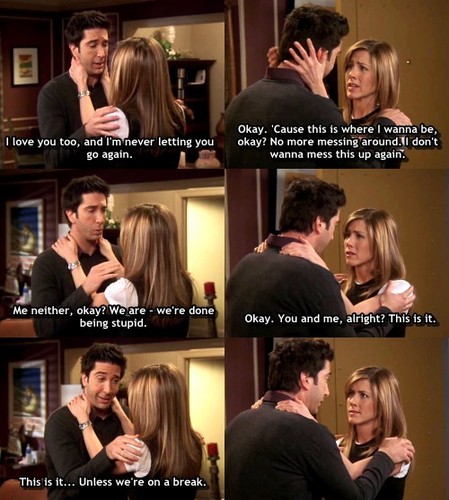 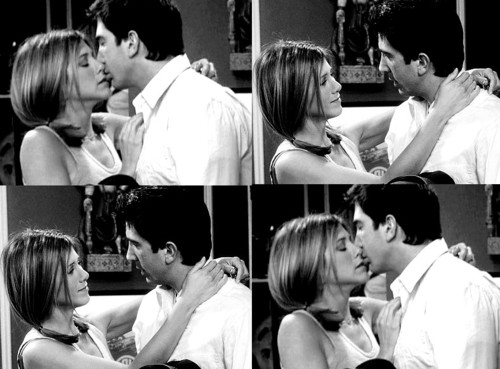 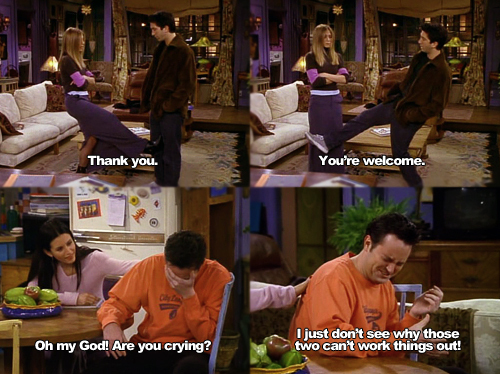 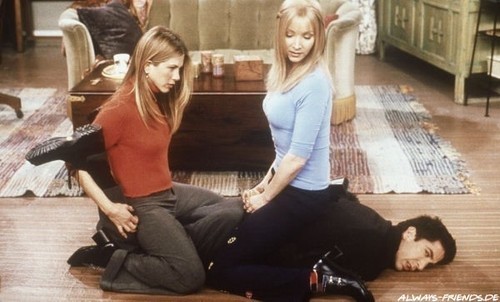