The day was warm and the skies were fair. London was abuzz with big news. In the count of only three days the eldest heir to the thrown was to officially take over the kingdom.....and yet, it mattered not to the children.

"Richard, Richard, pass it to me!" the girl yelled. Her name was Janine. She and her friends had just ended their schooling for the summer and were playing a very engaging game of kickball. With a swift forward motion, Richard kicked the ball with all of his might. The ball flew over the heads of the other children and out of the park into the streets of London. "Darn it Richard! Why must you always try to show us other kids up!? Janine said as she ran after the ball, her chest heaving. Her eyes focused on the target in front of her, she didn’t notice the carriage that had come to a sudden stop just for her nor the woman carrying the groceries that she had almost ran into. She chased the ball for what seemed like forever until the rolling stopped at the feet of a darkly cloaked maiden. The mysterious figure reached down to pick it up....." Is this yours...." she asked sweetly from underneath her veil of black. Janine looked up from the sidewalk until her eyes met the invisible eyes of the draped madam before her. "Um......yes," Janine replied shyly. The dark maiden held the ball out from her breast, gesturing for the young girl to take back what was hers. Just as Janine reached outwards for her ball, an outbreak from the crowd around them caught her attention. "There she is! There's the bloody witch!" with that, royal guardsmen started pouring into the streets. Janine was frightened. This had only happened one before and Janine knew what they were after. An escapee...Or at least that is what her brother had said... "C'mon lady we have to..." as she looked behind her she was surprised to see that the lady had vanished. She quickly averted her attention to the oncoming guards. She could see them inching closer with every passing second. In an instant she had made her decision. She ran as fast as her legs could carry her, her long braids flapping in the wind. If anything she wanted to lose the monsters that were now on her tail, for they were no ordinary castle guards. They were from the queen's insane asylum and she would not let her brother go back to that place......not on her life.

The darkness fell and all was quiet. The dark maiden trodded down an empty country road. She stopped only once for a long embrace with the memories of her past. She knelt down into the ashes of the fallen Phantomhive manor. Why had sorrow and defeat been the only things that had plagued the family that she was meant to belong to? "Lizzy, dry your eyes," a voice chimed from above her head, "It is not proper for a lady to look so." Elizabeth raised her veil and neatly put it behind her head. She lifted her gaze, her emerald green eyes sparkling in the moon light. "Ciel," she began in a whisper, “I was wondering when i might see you next." Ciel reached down towards Elizabeth hoping that she would grasp his hand so he could help her up out of the scorched earth, but as Eizabeth looked up to her lover from the charred remains she felt something she had never felt before when Ciel would come visit her in her concrete prison. Fear. It was fear she was feeling. "whats wrong Elizabeth? Why do you worry so? Come, take my hand," Ciel said with a warm yet dastardly smile. After some hesitation, Lizzie could stand to deny his request no longer. She grabbed hold and raised herself up to stand next to him. "Elizabeth now is the time I have been waiting for. When you and I will become one," he began leaning in towards her as if to give a kiss, "Come now Lizzy, the moon is beautiful tonight isn’t it?" He grinned and the night went on.....

Hope you enjoyed and read on =) Next time:
"His Butler, Yearning"
Sebby finally makes an appearance XD 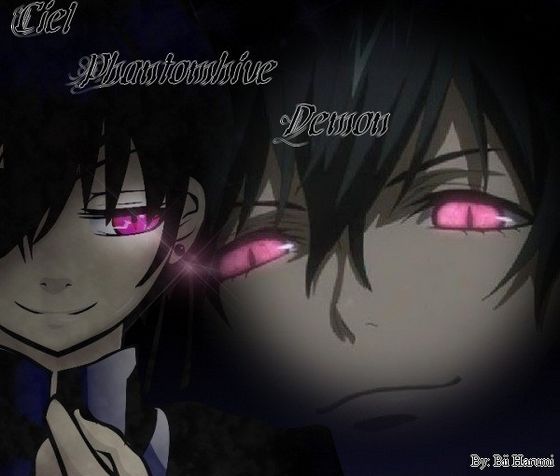