1
Falling Out Of The Sky: Chapter 3--Regrets
posted by Hellowittykitty 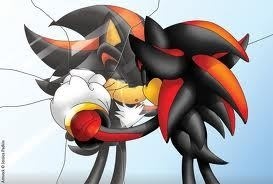 The way I saw Shadow in the balcony, his head smashing onto a mirror.
Sonic placed a delicate hand on my shoulder. I was shocked, and my eyes were as wide as saucers. What was he doing here? I could've sworn I was alone. Sonic looked at me, concern clearly stated in his eyes. Amy appeared out of nowhere and creeped next to Sonic, with a sad Tails behind her. Tails' eyes never spoke a lie, so many people could tell the mood in the room by seeing Tails' expression. And I knew this mood was going to be either sadness or rage. Amy didn't have her hammer with her, because I spotted it by the grassy patch of shrubs. Sonic still stared at me, my rainbow eyes piercing his soul. He shot a glare of approval at Amy, and she nodded. Sonic let out a deep sigh, and my eyes raised inquisitively. "Zo," he started, "We heard from Tails that you were going to met Shadow somewhere in the Cliffside ruins." I frowned angrily and stole a scared look from Tails. How did he hear me and Sally's conversation? That's odd. He left and went to go bother Amy and Sonic. Tails probably was on a mission for them to go spy on us. Sonic continued, "Honestly, we don't want you to go. Shadow's pretty dangerous and.....unstable. He'll lose it on you if you play around with his mood." My eyes blinked twice. They said these things about Shadow behind his back? With every inch of confidence in my voice, I said, "Sonic and Amy, Shadow saved me from monsters. How could you say that about him? Sure, he may be a bit of a pain in the ass, but he's probably lonely and misunderstood." Sonic, Amy, and even Tails were surprised by my confidence and dependence of Shadow. They saw that I wouldn't budge until they let me go. With a long talk, they finally allowed me to pass.

I saw the ruins. They were actually very pretty and beautiful. My eyes sparkled at the sight of the shining water, as clear as day. Long, thin lines of purple, exquisite yarn was scattered around the stained glass windows. There were golden artifacts positioned in all the right places. A long staircase with spiraling stairs etched up the side of the marble room. Birch wood was the flooring, decorated with ancient symbols, long forgotten. I was cautious of the ruins, protecting myself from any monsters that dared to attack me. Slowly, I approached the stairs. The soft creaking sound was the only sound heard. Was Shadow even here yet? As I got closer to the second floor, I saw a much bigger room than the main lobby. "Wow...." I said breathlessly, tacked aback by the wondrous sights. A symbol of the sacred lance Tankilicom, was on the light brown stained Victorian window. Tranquility swept over my mind. I scanned the room more nonchalantly and eased my rifles in my black purse. The room had ruby pillars extending upwards like giant hands. I groaned. "Great, another stupid set of freaking stairs." Lazily, I ascended the long staircase. A flaming stack of candles lit the way angelically, as if this place was heaven itself. "He said to meet me here, where is he? That hedgehog was super fast, he shoulda been here at least 2 hours ago." I sighed. No more stairs. He has to be somewhere in this huge room. "I've been expecting you, Zoe." said a familiar voice. I turned suddenly and saw Shadow, his arms folded, staring off into the evening sky in the balcony.

"Well, I guess no hello?" I said jokingly. Shadow blinked at me, a sign he didn't get it. I rolled my eyes and joined him near the balcony. Shadow looked very serious, his mouth in a straight line. I didn't know if I could trust Shadow, so I kept a safe distance from him. Not too close, not too far away. The sky was shaded in a beautiful nectarine orange. Being so caught up in the scenery, I let out a peaceful sigh. Shadow was meditating because his eyes were closed tightly, and he wasn't too happy I disturbed him. "Don't sigh so loud. Annoying woman." He grunted. I was offended a bit and said with an edge, "Well sorry, Mr. I-Can't-Take-A-Joke." Shadow narrowed his eyes at me. He was about to say something, but pursed his lips shut. In my head, I scolded, "Good for you that you don't say anything, cause I would've so yelled at you with a good rebuttal." I only scowled in real life, and stuck out my tongue when he wasn't paying attention. After a while of silence, Shadow said nervously, "What do you like to do?" I raised my eyes in disbelief. Shadow DID NOT know how to spark a conversation. I giggled softly and Shadow grunted. "Why are you laughing? I'm not saying anything funny." He blushed brightly, his face turning hot. "Shadow, you really need to know how to start a talk. But what I like to do is train, spend time with friends, meditate, party, and play on my computer." Shadow was paying a lot of attention, and nodded every-time I said a word. Was I like his goddess or something?

After taking about what we like to do and other stuff, Shadow smiled. "I'm glad I got to know more about you. You're.....a pretty good person, just like Maria. Maria......." Shadow trailed off a bit at the end. Since we understood each other better than how we first met, I said softly, with a coo, "Shadow, what's up? You look awfully distance right now. Something bugging your head?" He gulped audibly and sighed. His scarlet orbs looked so surreal in the moonlight. Time passed quickly when you got to know him better. Shadow looked at me, and inched closer. I felt my cheeks getting hotter by the second. He whispered quietly, "C-c-can I tell you something? I told this to the others, but not in great detail. This is very disturbing, sad, and horrible part in my past." I nodded slowly. I hoped this disturbing part wasn't what I expected it to be. The word "raper" immediately appeared in my mind. Shadow closed his eyes and stared into the fully white moon. "A long time ago, my friend and I lived on a space colony called the A.R.K. I taught her many things and she taught me many things about Earth. She had a serious degenerative illness called NIDS. One day, there was a warning signal on the colony that enemies were coming. Maria saved me by putting me in a capsule and......losing her life for me....and I vowed to avenge her for everything the humans did." Shadow clenched his fists, but calmed down shortly afterword. "You remind me of her somehow.....calm, caring, and friendly. But you definitely have spunk about you. You're tough. I-I-I-I like that, a lot." Shadow got closer and closer, until our noses were touching.
He tenderly stroke my cheek and smiled sympathetically. My twin brown fluffy cat tails swirled in the wind. "Oh god....." I thought. Shadow smirked and wrapped his arms around my waist. Out of habit, I wrapped my arms around his neck. Shadow blushed and leaned in. His lips pressed against mine softly. I was spellbound. After a few minutes, we stopped.

Shadow and I giggled softly at our actions. "That was just a friend kiss right?" I asked dumbly, praying it was that. Shadow smirked. "Nope. I like you. A lot. Let's keep this relationship a secret." I nodded, but somehow, this felt wrong. A bad feeling sunk into my stomach. Shadow kissed me reassuringly, and we walked back to the tents hand-in-hand. My instincts were screaming that something bad was going to happen..........but what?
XxXFloraXxX likes this
Shadow x Rouge
posted by ShadowGirlLover 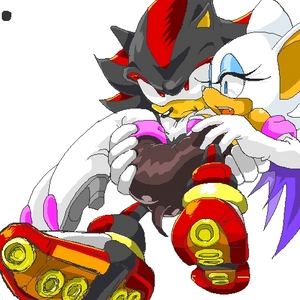 Rouge and shadow
Shadow was walking to Sonic's house when he heard Rouge calling for help. Shadow forgot about Sonic and rushed to save her. He quikly grabed her and took her to a safer place. Rouge said that she didn't need his help. Shadow said you would have been crushed if it wasn't for me. Rouge turns over to Shadow, you know your kinda hot. Shadow blushed. Shadow put his hand aruond Rouge. Shadow said your kinda sexy yourself.(Shaodow and Rouge makeout for a while.)Sonic runs into the both of them. Sonic says what's up. Shadow kicks Sonic in the nuts and runs away, without Rouge. 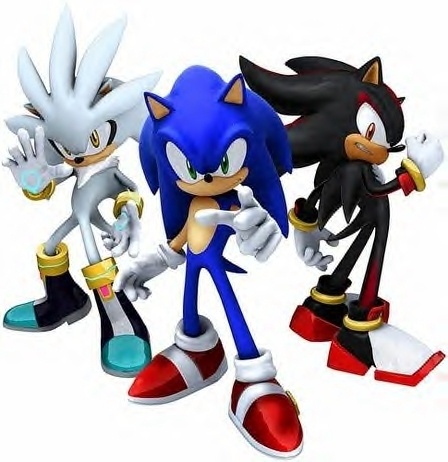 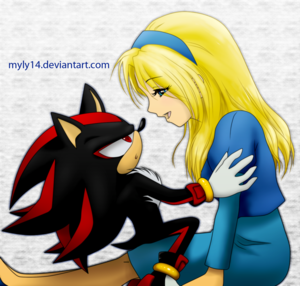 4
Shadow and Maria
added by lili11p
Source: Myly14 on dA 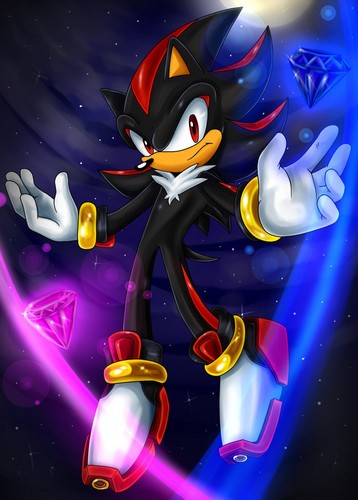 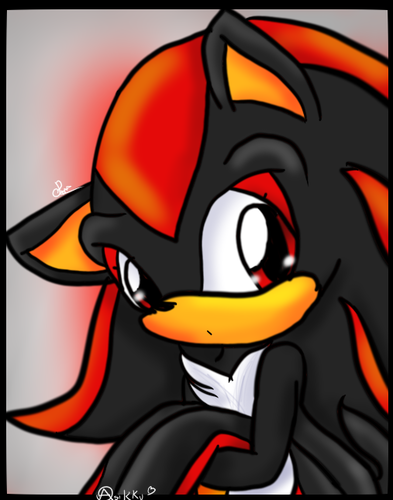 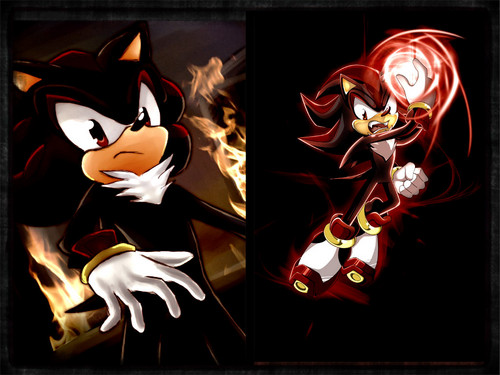 4
Shadow the hedgehog
added by TheQueenRose 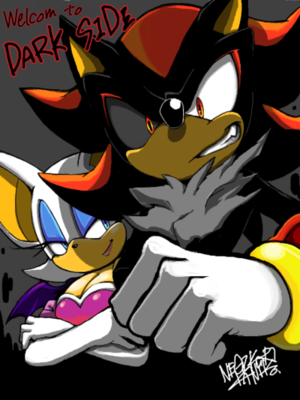 6
Welcome to the Darkside
added by Skyadami
Source: tumblr 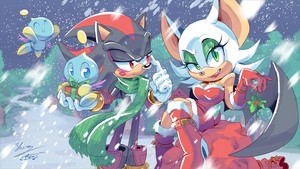 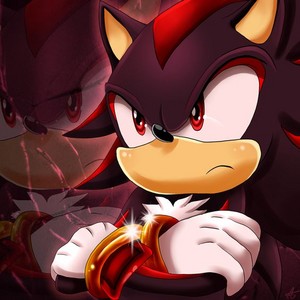 Shadow The Hedgehog
added by kicksomebut23 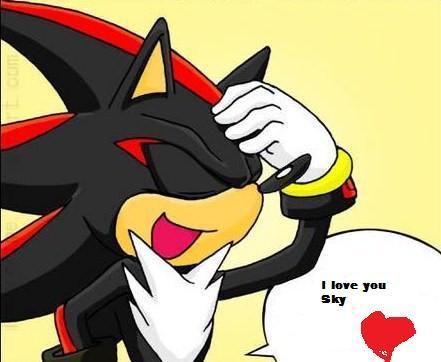 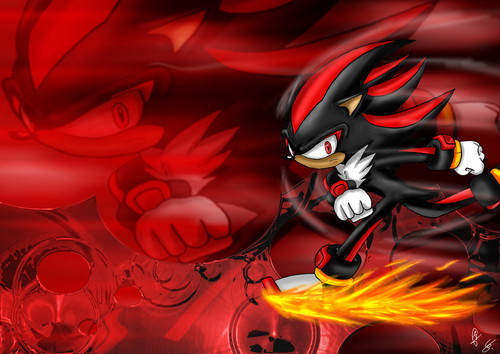 11
GUN Shadow
added by sonic143amy
Source: Someone other than me. 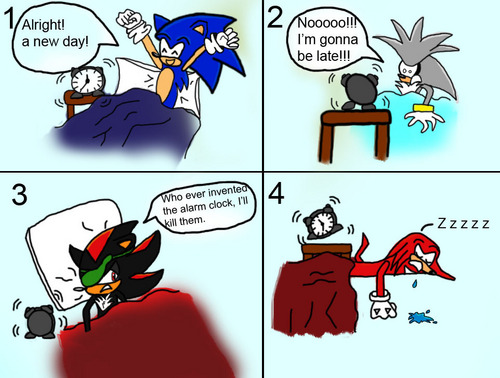 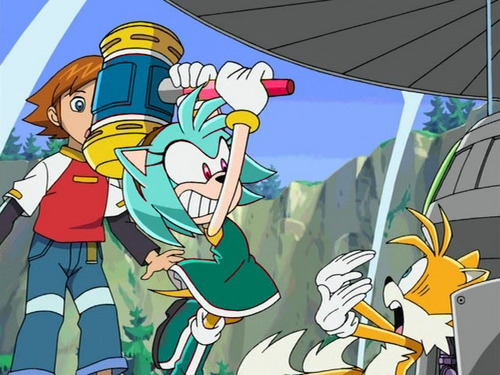 Aqua. "You frigging kissed me!!!"
added by mimomikomilo 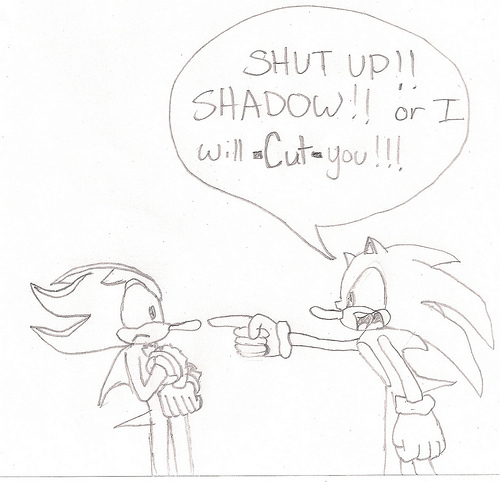 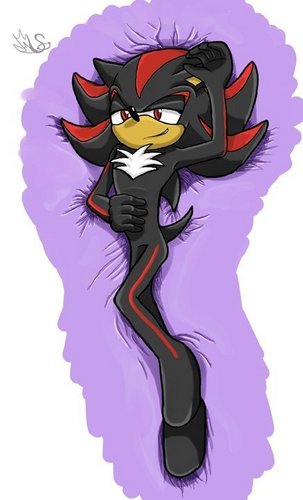 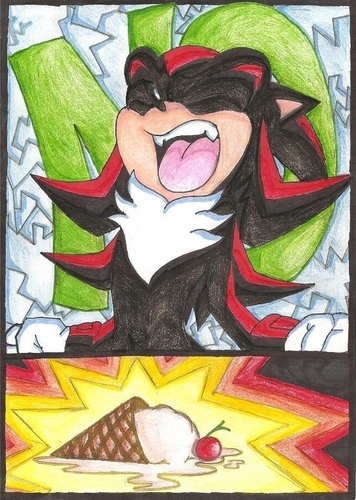 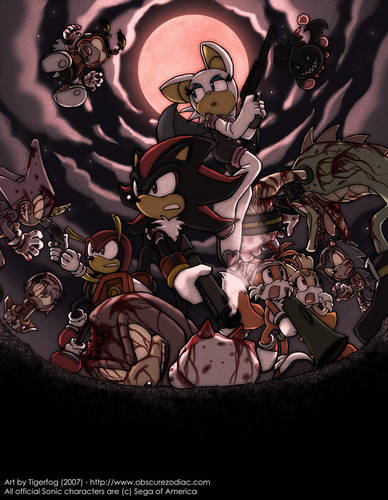 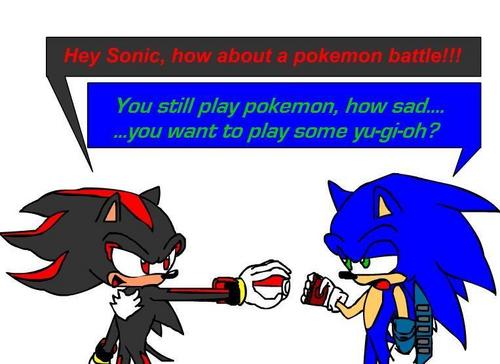