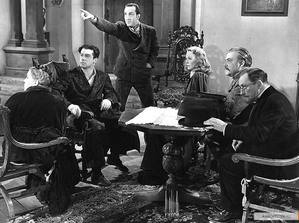 The year 1939 proved to be a momentous time for fans of Arthur Conan Doyle's Sherlock Holmes. The year marked the debut of two movies that featured the movie introduction of Basil Rathbone and Nigel Bruce as the famous literary detective and his friend, Dr. John Watson.

There had been previous movie, stage and radio adaptations of the Sherlock Holmes. But despite the recent success of Robert Downey Jr., Jude Law, Benedict Cumberbatch and Martin Freeman in the roles of Holmes and Watson, Basil Rathbone and Nigel Bruce would become the first cinematic pair to truly become famous in the roles. They ended up portraying Holmes and Watson in fourteen movies for Twentieth Century Fox and Universal Pictures. And their first movie together was 1939's [b]"THE HOUND OF THE BASKERVILLES"[/].

Based upon Doyle's 1902 novel, "THE HOUND OF THE BASKERVILLES" is about Sherlock Holmes and Dr. John Watson's investigation into the legend of a supernatural hound, a beast that may be stalking a young heir on the fog-shrouded moorland that makes up his estate in Devonshire. The investigating pair receive a visit from a Dr. James Mortimer, who believes that the last heir of Baskerville Hall might be in danger from a legendary hound that may have killed many in the Baskerville line, including the family's founder - Sir Hugo Baskerville - and Dr. Mortimer's close friend, Sir Charles Baskerville. Holmes originally dismisses the so-called "demonic hound" as a fairy tale. But when Sir Henry arrives from Canada and receives a series of threats, Holmes sends Watson to accompany the young heir and Dr. Mortimer to Baskerville Hall, claiming that he is too busy to accompany them himself. Sir Henry quickly develops a romantic interest in Beryl Stapleton, the stepsister of his neighbor, a local naturalist named John Stapleton. The new arrivals also deal with the stranger behavior of Sir Henry's servants, Mr. John and Mrs. Barryman; and an escapee from Dartmoor Prison lurking on the moor. Right before an attempt on Sir Henry's life, Holmes finally makes his appearance in Devonshire. And Dr. Watson learns that he had been making his own inquiries for quite some time, while in disguise.

Ernest Pascal's screenplay included at least one or two changes from Doyle's novel. One, Sir Henry never became romantically involved with Beryl Stapleton. The butler's name was changed from John Barrymore to Barryman, due to the existence of famous actor John Barrymore. And unlike the novel, the murderer's fate was left unknown, despite Holmes' assurances that the former would not get very far, due to constables being posted on the road. Aside from the previously mentioned, "THE HOUND OF THE BASKERVILLES" remained faithful to the original novel. Even more importantly, the movie proved to be a surprise hit for the Twentieth Century Fox.

After watching "THE HOUND OF THE BASKERVILLES", it was easy to see why it became a hit. Directed by Sidney Lanfield, the movie is a well-paced and solid piece of entertainment filled with action, suspense, a little romance, and rich atmosphere. As much as I love murder mysteries, they have a tendency to drag a movie's pacing at one point or another . . . despite the movie's quality. My only real complaint about Pascal's plot was the vague manner in which he left the murderer's fate open. Why did he do it? And why did Lanfield and studio boss, Darryl F. Zanuck, allow Pascal to get away with this?

The suspenseful atmosphere re-created for the movie's Devonshire setting could have easily done this. But Lanfield and the action featured in the plot prevented this from happening. And speaking of atmosphere, I have to congratulate art directors Richard Day and Hans Peters, along with set decorator Thomas Littlet and legendary cinematographer J. Peverell Marley for doing such an excellent job in not only re-creating the mysterious atmosphere of the Devonshire moors and more importantly, late Victorian England.

Basil Rathbone had been known for the villainous roles he had portrayed in many costume dramas in the 1930s. Before "THE HOUND OF THE BASKERVILLES", he had only portrayed one or two heroic types on screen - in 1938's "THE DAWN PATROL" and 1939's "SON OF FRANKENSTEIN". For an actor known for portraying villains, it is ironic that his most well-known role would prove to be the heroic Sherlock Holmes. Not only did Rathbone seemed like the physical embodiment of the fictional sleuth, but he captured the character's sharp intelligence, wit and strong will. And his screen chemistry with Nigel Bruce was spot on. They made a perfect screen team. What I enjoyed about Bruce's portrayal of Dr. John Watson is that he was not the blustering buffoon that his character would become in the Universal Pictures. All right, Bruce's Dr. Watson has a bit of bluster in his characterization. But his Watson was a sharp and observant man, whose comments about some of the suspects would prove to be accurate. And like Rathbone's Holmes, he also had a nice, subtle wit.

The rest of the cast proved to be solid. Lionel Atwill gave a first-rate performance as Dr. James Mortimer, the man who hired Holmes to investigate the strange deaths around Baskerville Hall. Beryl Mercer gave a funny performance as Dr. Mercer's dithery wife, who was into spiritualism and seances. Morton Lowry was both charming and intelligent as Sir Henry's neighbor, who also harbored suspicions about the strange occurrences Wendy Barrie proved to be a sweet and charming Beryl Stapleton. Although I must honest that I found her character to be slightly one-dimensional at times. I could say the same about Richard Greene's Sir Henry Baskerville, whose good looks and charming personality made the character seemed a little too ideal for my tastes. Greene was credited as the film's lead character. But when the movie proved to be a surprise hit, Rathbone and Bruce - quite rightly - assumed the lead credits in future Sherlock Holmes films. John Carradine gave one of the movie's better performances as Sir Henry's mysterious and slightly sinister butler, John Barryman. Whereas Carradine was mysterious, actress Eily Malyon seemed fearful and secretive as Barryman's emotional wife.

Unless one is a stickler for a movie strictly adhering to its novel source, any Sherlock Holmes fan would find "THE HOUND OF THE BASKERVILLES" to be a very entertaining and atmospheric adaptation of Arthur Conan Doyle's novel. And both Basil Rathbone and Nigel Bruce ended up proving they were the right men at that time to portray Sherlock Holmes and Dr. John Watson. 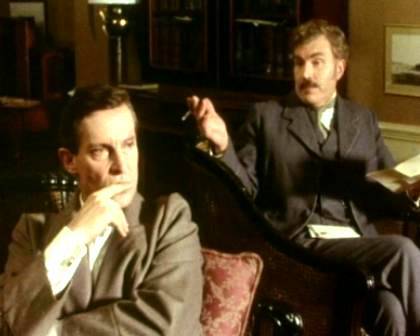 3
Holmes and Watson, Granada
added by hubble
Source: I cap loads of stuff but I might not have done all of these. 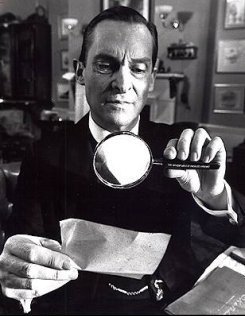 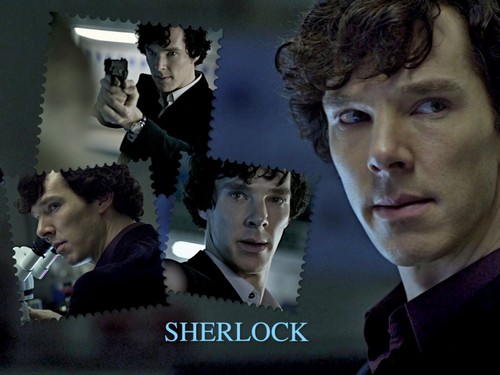 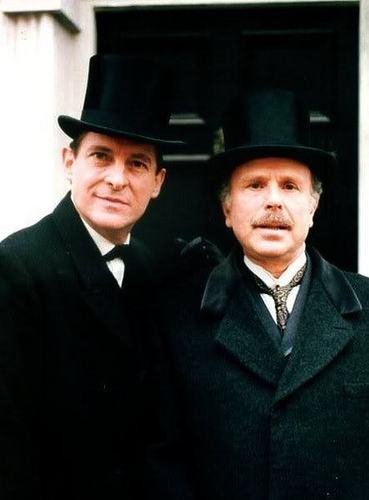 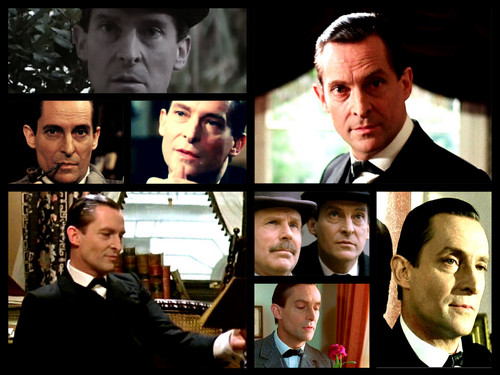 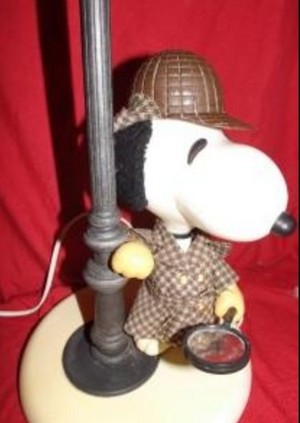 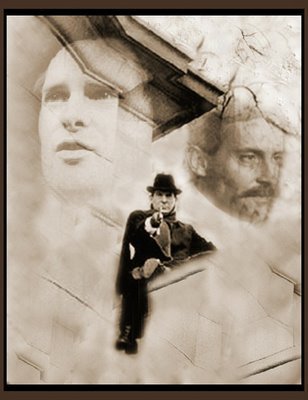 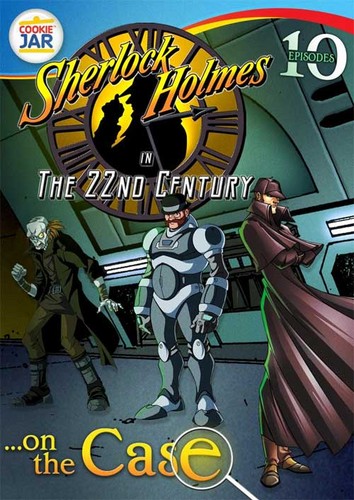 Sherlock Holmes In The 22nd Century
added by mitsuki963 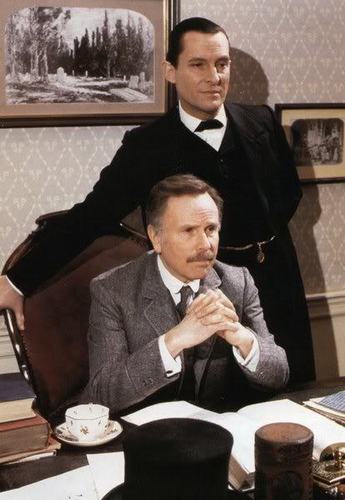 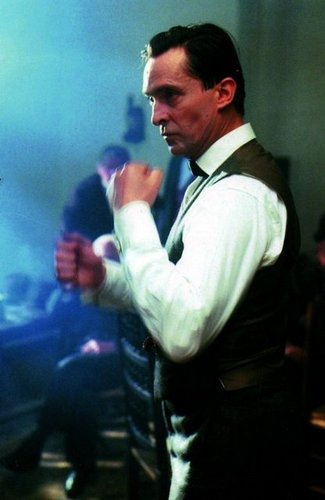 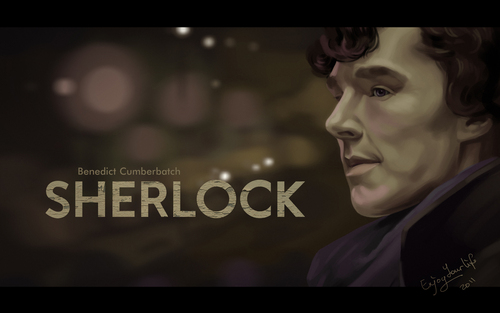 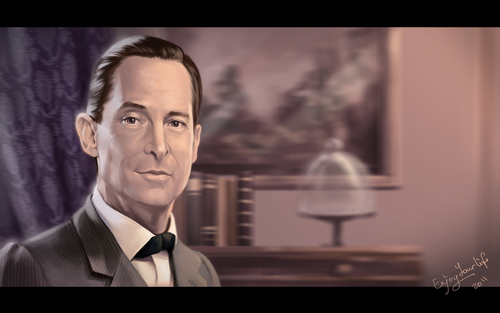 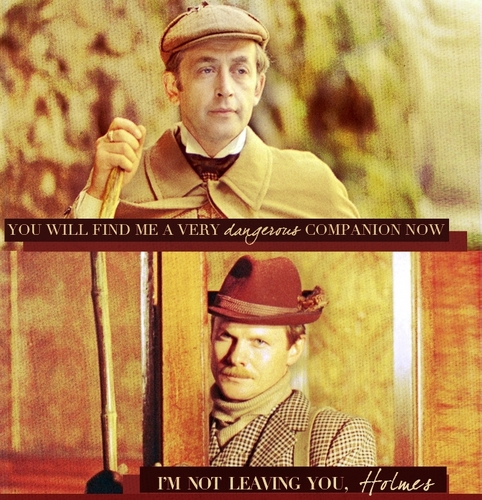 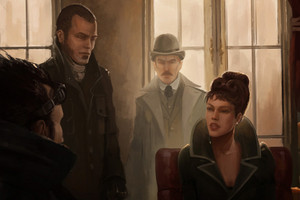 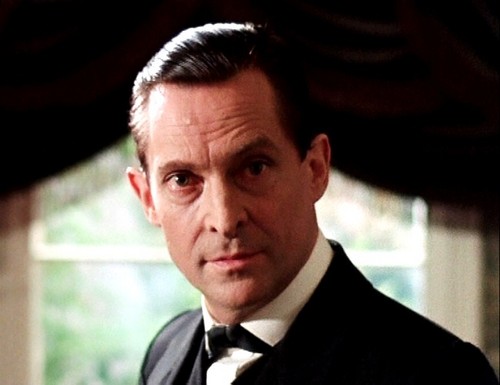 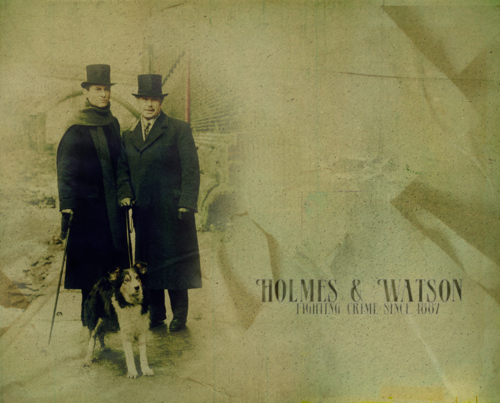 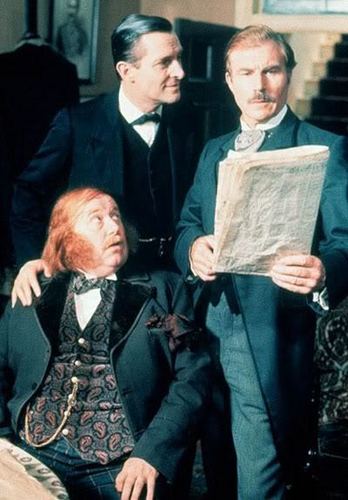