It was a typical day and i just started a new band.this bad had rouge on base, cream on piano, Cathleen on guitar, and me as singer. we worked hard in rehearsals and at 7pm our practicing will pay off. our band will be playing at mall. after a few more practices it was time for us to play. tension was building up because everyone came to listen to us EVEN sonic. sonic didn't know i was in the band anyway which was probably the only reason he came because he thought i wouldn't be there. a man told us 5 minutes til' we go on. everyone was nervous because this was out first show and there was a big crowd. finally we were on. as we came out we saw everyone especially sonic so i was very nervous. Thank you all for coming and this is a song called sk8er boy. i said then i saw sonic with and sally but i put a smile on my face.

He was a boy, she was a girl
Can I make it anymore obvious?
He was a punk,she did ballet
What more can I say?
He wanted her, she'd never tell
secretly she wanted him as well.
But all of her friends stuck up there nose
they had a problem with his baggy clothes.
He was a skater boy, she said see ya later boy
he wasn't good enough for her
She had a pretty face, but her head was up in space
she needed to come back down to earth.
five years from now, she sits at home
feeding the baby
she's all alone
she turns on tv
guess who she sees
skater boy rockin' up MTV.
she calls up her friends,they already know
and they've all got tickets to see his show
she tags along and stands in the crowd
looks up at the man that she turned down.
He was a skater boy,she said see ya later boy
he wasn't good enough for her
now he's a super star
slamin' on his guitar
does your pretty face see what he's worth?
sorry girl but you missed out
well tuff luck that boys mine now
we are more than just good friends
this is how the story ends
too bad that you couldn't see
see that man that boy could be
there is more that meets the eye
I see the soul that is inside
He's just a boy, and i'm just a girl
can I make it anymore obvious?
we are in love, haven't you heard
how we rock each others world
I'm with the skater boy, I said see ya later boy
i'll be back stage after the show
i'll be at a studio
singing the song we wrote
about a girl you used to know.

After we were done i saw sally and sonic come to me.
Hi amy. sonic said
Hi sonic. i said
Sally, Amy. we both looked at eachother with an hatred smirk on our faces.
Nice show amy i didn't know you were the act tonight.
Thanks sonic well i better get home and rest see yeah. i said and walked off. it was hard for me to walk away like i didn't like him but i just wanted to get home after seeing sally.

It was morning and we had another show and this time it was at twinkle park. i started writing down lyrics and then started thinking about sonic and sally. then instead of the lyrics i had down i went for my song book and looked through it. finally i found a perfect song that was heart felt and reminded of sonic's and mine relationship that we have.
zorana15 and Sonamycutiepie1 like this
Sonamycutiepie1 Great story and i love the song Skater boy good it totally fits them well
kayley02 i love that song i used to play singstar and sing that song anyways this is very interesting and nice :D
caspercutie97 So far so good!
sonamymonster cool! 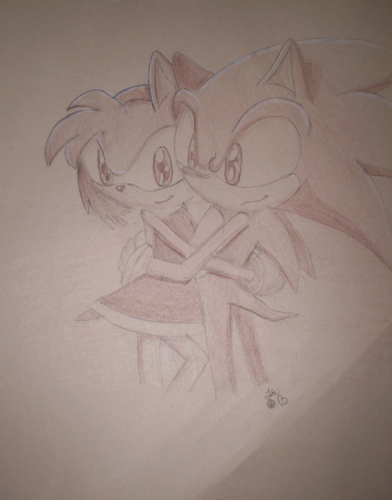 7
Sonic and Amy
added by Sonic_X_fan

It was finally morning and i just wrote a new song that is perfect but i kept feeling guilty but i didn't know why so i just ate breakfast and headed to rehearsals at rouges house. when i got there i showed them the song they all loved it so we began practicing it. after a few days of practice our concert was only minutes away and minutes away before sonic feels sorry to have ever hurt me. as soon as i was on stage i saw sonic but with no sally with him. (wonder why).
Hello people who came out tonight this is a song i'd like to dedicate to sonic the hedgehog...
continue reading...
2
Amy's one chance ch. 3
posted by moonlightroses1
Amy's one chance
chapter 3

It was a nice day and me and sally found a flyer that said "Lovin' Angels preform at the downtown mall tonight at 7pm don't miss it."
Hey sal lets go to the concert tonight i might be fun. i said while sally was thinking it over.
Ok sonic i'll go with you. she said while hugging me. it was finally time for the concert to start and when it did i saw amy on stage. (now way amy's part of the band she can't sing can she?) i thought to myself and as amy came out so did the rest of the band they sung sk8er boy.
after the concert i went back stage with sally to go...
continue reading...
2
Amy's one chance ch. 2
posted by moonlightroses1
Amy's one chance
chapter 2

As i started heading towards twinkle park i run into sonic who was with sally again.. (just my luck).
Hey amy im sorry but i can't make it to your show tonight. sonic said while i was coming towards them.
Yah me neither i hear it's going to be great though. sally said with a smirk. i knew sally was up to something but i didn't know what so i ignored it.
Yah this show will be great as long as nothing bad happens. i said with the feeling sally is going to ruin the show.
Well ok amy you should probably go and get ready for tonight and me and sonic are really sorry that we...
continue reading... 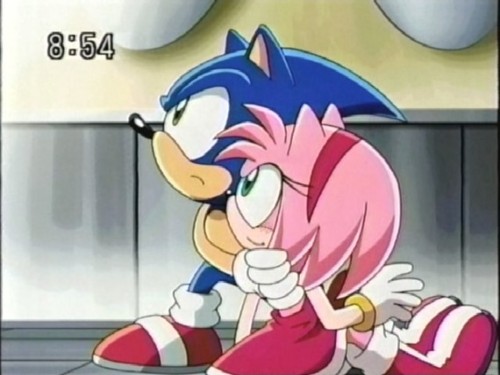 1
Sonic and Amy
added by Englandrules83
1
sonic's only chance (this is a sonamy story learn to like it)
posted by akeena
sonic:* is walking listing to music sees amy* hey amy!* waves* Amy:oh uhh hi sonic *walks a little faster * sonic:{thinks wow thats strange yousely she hugs me whats wrong today?} *runs to amy who's steel walking fast ,but sonic keeps up* whats wrong ames?
amy:*blushes*you haven't called me that for a long time soniuku. all the sudden eggman rushes in grabs amy with his robot and keeps her in a tight grip eggman: mwahahahha try to save her if you can sonic! i'll be waiting for you and bring me that emerald you got hidden somewhere and don't keep me waiting your girlfriend won't have long mwahahahha*flys away*

does sonic save her to be contuiened look for #2