2
Blade X Shade
posted by BladePorcupine
The base was on alert. A blasting intruder alarm blared throughout the metal corridors. Two figures dashed through the halls dodging lazer fire from the battle driods pursuing them. One was a male porcupine with markings like Shadow's, except he was blue and silver. His first two head spikes curved down, but his last curved up. He had a silver crescent shaped marking on his chest. He had high tech boots and arm devices. His name was Blade.
The other was a female echidna. She was orange and white, and was wearing a black suit with wrist rings. A black headband stretched around her head. Her name was Shade.
Shade was holding a glass cylinder containing a glowing green crystal. They had reached the open air observatory. The droids behind them really wanted it back, and they were not going to let them get away with it. A Super Battle Droid fired a wrist rocket at them. The projectile exploded behind Shade and sent her flying out of the observatory and off of the cliff.
Blade rolled his eyes and jumped down after her.
She was falling a few meters before him. He pressed his arms to his side and his legs together. Up ahead, Shade saw Blade diving towards her and she slowed her descent so he could catch her. He grabbed her hand, and he brought them closer to the cliff wall. Blade unsheathed his sword and at the same time ignited his boot rockets. The combination stopped their fall.
They both breathed a sigh of releif and hung in silence for a while.
"Well, that went well," Blade remarked.
Shade snorted and said, "If almost getting blasted and thrown off a cliff is what you call well, then you're crazier than I thought."
"I'll take that as a compliment, sugar lips."
"Rrrggh, Your so difficult!!!"
Blade grinned, "Gimme time, you'll warm up to me soon enough."
Shade's response was a slap to the face.
"Ouch! Fiesty...I like that.
Shade stopped talking and activated her warp belt as she closed her eyes. When she opened them, she found herself on the top of the cliff...and Blade! When Blade opened his eyes and saw her on him, he turned a deep blue. Shade felt her own cheeks burn red.
She got off and Blade sat up. They didn't look at each other for another long moment.
Then Shade gave Blade a stern look and said,"We tell no-one that EVER happened, got it?
Blade flashed a smug grin,"I kinda enjoyed it."
Shade made a disgusted sound and took out the glass cylinder with the crystal inside.
"Why would the Seperatists want this?"
Blade took the cylinder and studied the crystal.
"It's a polyfixar crystal. Really rare. Huge amounts of power. Able to destroy a planet or power it. Either way, this thing is illegal."
Shade just gave him an inquisitive look. Blade was starting to get uncomfortable with her looking at him so intently. Then an idea sprang into his head, and a playful grin appeared on his face.
Blade turned to Shade and commented,"If you're done checkin' me out, we should lock this thing up." Blade's smile grew broader as the familiar, annoyed look appeared on her face again.
"You are such an egomaniac! When will you ever grow up!?,"Shade yelled at him.
"I don't know, toots,"Blade replied as he raised a brow,"Maybe when you decide to do the same?
Shade's eyes narrowed, and Blade expected her to blow any minute. She stalked right up to him and came face-to-face with the porcupine. Blade readied himself and expected her to attack him. It was right there and then that Shade did something unimaginable at that moment. She grabbed his shoulders...and forced her lips on his.
She was kissing Blade! His eyes widened in shock. He had not anticapated that Shade would do that. He could feel her soft but forceful lips hug his own. She was incrediblly strong, applying lots of pressure on where she held his shoulders.
After what seemed like eternity, she finally pulled away and released the him at the same time. Blade's eyes were still wide, and his mouth now hung open in a speechless gape.
Shade turned and began to walk back to their ship.
After she had walked a short distance, she glanced over her shoulder and said,"How's that for fiesty?"
She continued towards the craft and didn't look back again. Blade still stood there, trying to get a grip on reality. He shook his head to try and clear his mind. Even though it felt like a long time had passed, the kiss had only lasted a few seconds. He'd never been kissed before; it was a completly new feeling for the Blue-Blood. The experience was both intresting and confusing.
After he had mentally calmed himself, realization smacked him dead in the face: Shade had schooled him. Hard. She had won. Blade respected that kind of determination. But was it respect that Blade felt or...something else.
He just shook his head again and began to follow Shade. Although Blade wasn't showing it, he was secretly smiling on the inside. 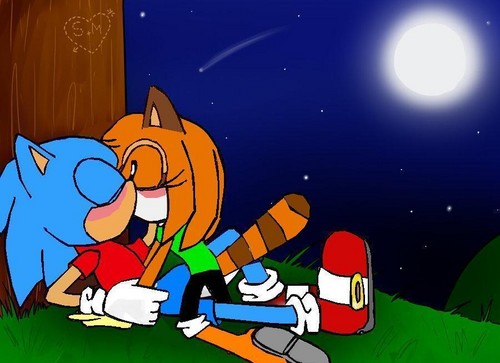 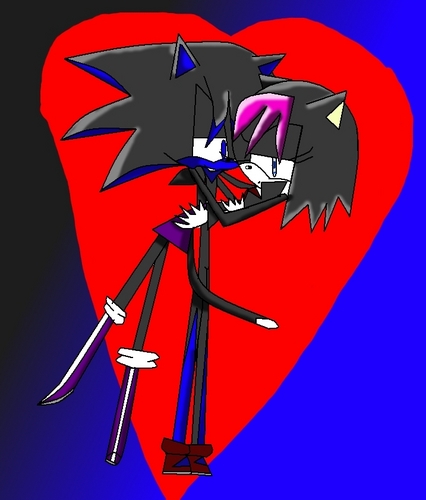 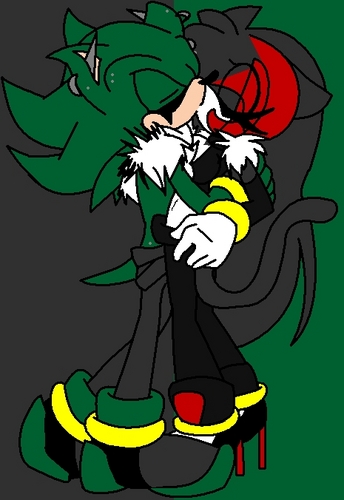 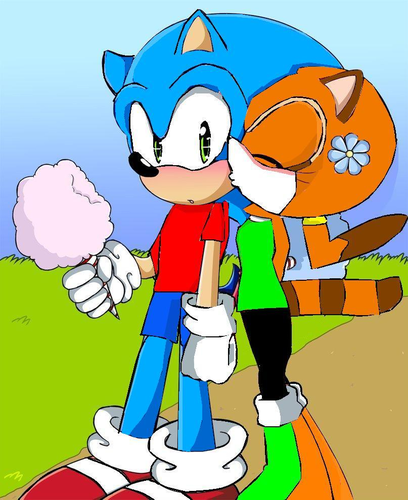 somco x marine
added by kevin13110
Source: 123
luna and jakes seperation ...part 3..final
posted by sexyluna34
after we were kissing for so long .... i stopped and i told him to do something to me that ive never told anyone else.

scourge: *pervy smile* heh.....but *pushes me on the bed....then puts his hand on my crotch* i wanted to tell you that i was gonna fuck you anyways...so how bout it?

scourge: *chuckles* ask and you shall recieve.

i then took off my jumpsuit while scourge took off his jacket.... 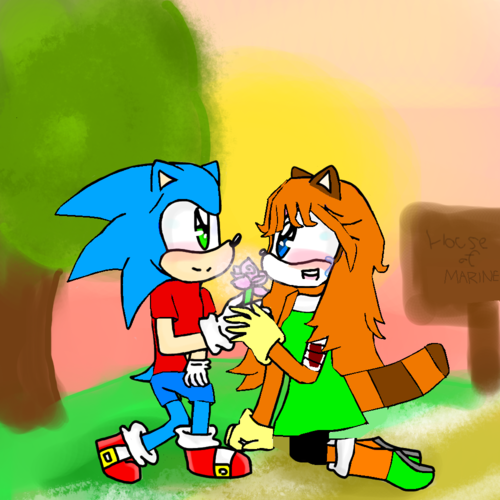 just then two arms were hugging me.....was it jake?

i turned around to see myself in despair....it was the one person who i didnt want now........ 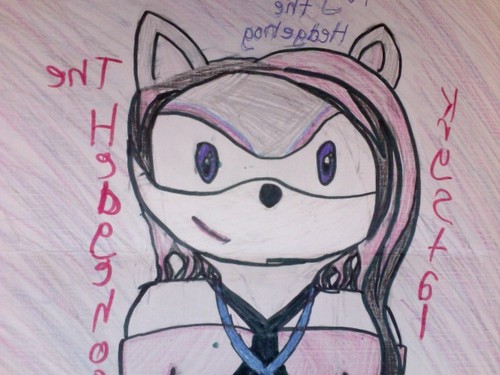 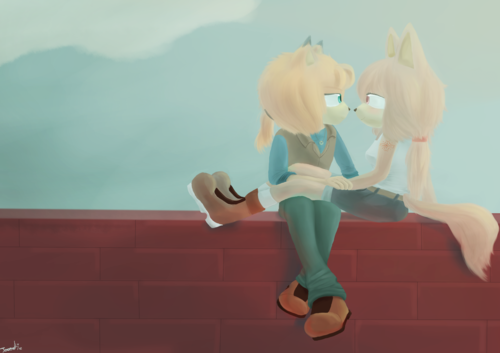 My sonic Fan coulpes with the real character
added by HoneyXManic 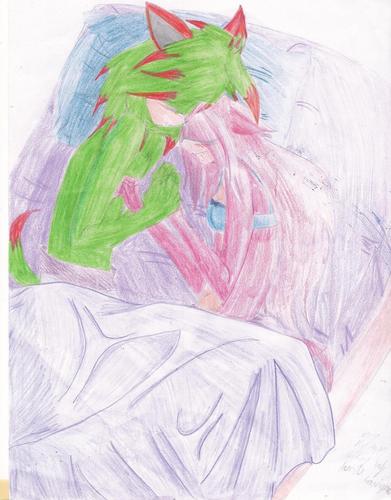 DiamondxNitro
added by Alisha13
Source: me 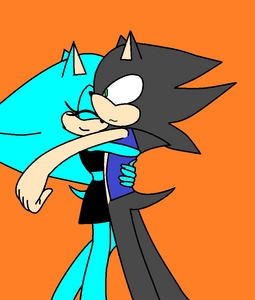 Emma and Dusan (ME)
added by DusanIvanovic
Source: Credit to:Mariaxshadz 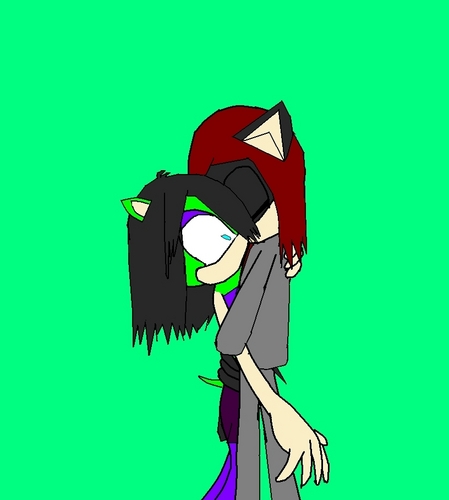 1
my crush kissed my sis
added by shadowlily
Source: shadowlily 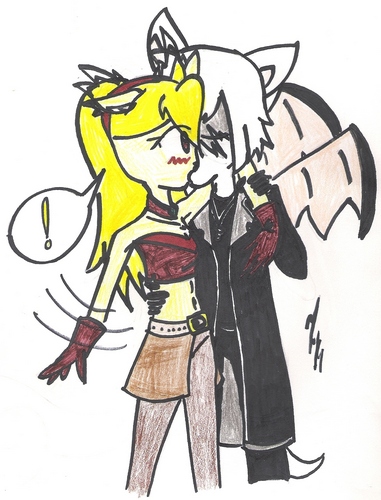 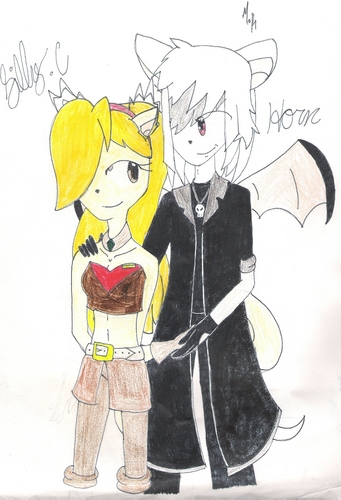 Silly C. and Horn
added by frylock243
Source: Me! ^_^
Angel or Silver chapter 1
posted by silverstruelove 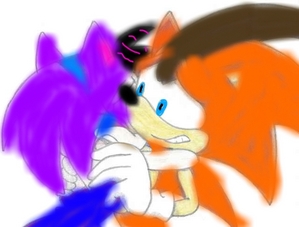 the healing hug
One day:
Me:(walking my two daughters in the park) i wonder what your dad's doing
Ashley:dada
Me:(smiles) yes dada (hears a voice)
Voice:i love you Blaze
Me:(sees from tree to see Silver kissing Blaze) i can't believe it. He's cheating on me. (Runs away crying with my kids in my arms)
Silver:(hears and sees Magic crying) Magic!!!!
Me:(ignores him and teleports to Shadow's house)
At Shadow's house:
Shadow:hey little sister
Me:hey. Shad can you do me a favor?
Shadow:sure
Me:im going to be gone for a while can you watch Ashley and Megan until i come back
Shadow:sure
Me:thanks (hands them over to Shadow and...
continue reading... 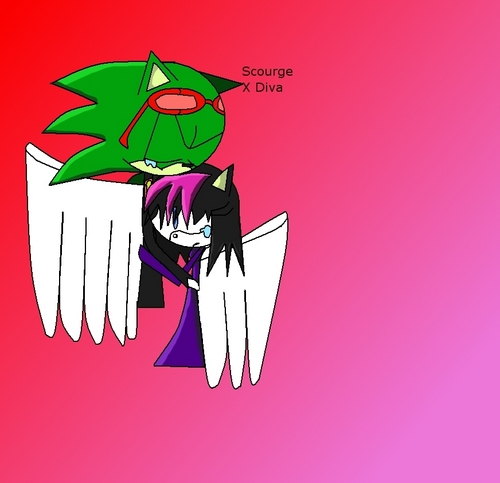 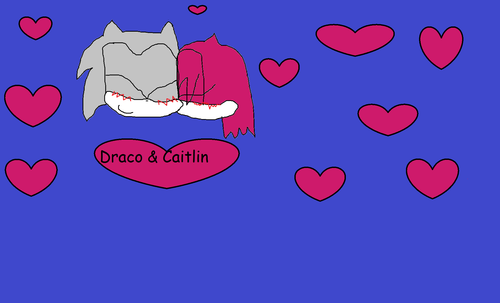 Draco and Caitlin
added by Dracinny
Source: Me 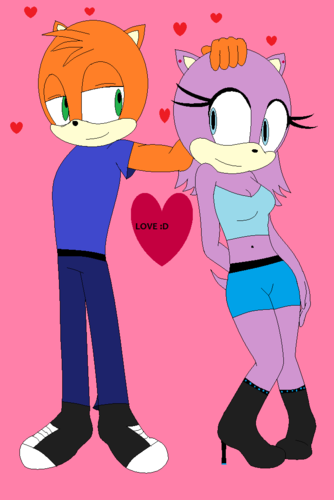