A love that conquers Fanfiction
posted by AcidBanter 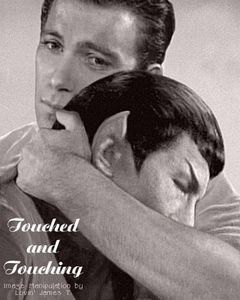 Touched and touching
Got to love fanfics! You can come up with anything and bend any rules you want.

In saying that, Spirk still holds the record for best fanfics imo. With other / I've read they tend to be focused more on tension and the idea that what they're doing is wrong and shameful, but no matter how many Spirk fics I read they're always sexy, funny and completely sweet and romantic, of course they sometimes have some tension going on like any interesting story but it doesn't feel like it's the male intimacy that's "wrong and shameful", it's either that they're having an affair or that they're both officers...
continue reading...
2
A New Beginning
posted by AcidBanter
They’d been in Kirk’s room for almost 2 hours and they still couldn’t reach an agreement on how to handle the upcoming peace talks with Triton IV. Kirk couldn’t understand it. They were getting along so well for a few months then things started getting more and more tense and he didn’t know how get rid of it.

“What the hell do you want me to do?” Kirk asked, exasperated, “It’s a damn peace meeting and you’re treating it like a chess game.”

“I am merely pointing out that we have to be discreet in our dealings with this planet,” came Spock’s response, “The people...
continue reading...
3
Do You Think Spock/Uhura Will Last ?
posted by 1billsookie
JJ said that the reason why they had Spock/Uhura in the first place was becuase "Spock was really, really going to need a hug, and Kirk wasn't going to like him yet." So.....uh........wow ! Is it just me or dose that NOT seem like grounds for a lasting relashonship?

JJ said that "In TOS Kirk was the one who kissed Uhura, so we wanted to switch it up this time". That sure seems romantic dosen't it?

Also, if you look at the emontional reaction/chemstiry difference between Spock/Kirk and Spock/Uhura it's VERY different. I know that Spock is soupossed to be Vulcan and reserved and everything, but...
continue reading...
3
What do you think ?
posted by 1billsookie
here are a few reasons why i think that K and S will be together by the time the new ST series are over.

think about what they had Spock Prime say. "You needed each other. I could not deny you the revelation of all that you can acomplish together. Of a friendship that will define you both, in ways that you can not yet realize." he didn't say way, he said ways. sounds like T'hy'la to me. he also says, "I urge you to remaine in Starfleet. For once put aside logic. Do what feels right." that whole conversation he's talking about Kirk and Spock. i highly doubt Spock Prime was talking about his carrer....
continue reading...
3
reasons. did i over think it ?
posted by 1billsookie
just a few things that prove that K and S were totally in love with each other.

Star Trek was first seen on television in 1966. The series is about a Starship called the USS Enterprise, the mission of which is to find and establish peaceful communications with life on other planets. James Kirk and Spock are the main characters. James Kirk is the captain of the Enterprise and is a human. Spock is the Science Officer and First Officer, and is half Vulcan and half Human. Vulcans are a humanoid species who trained from childhood not to feel or express emotion and to function on pure logic. In the...
continue reading...
Be My Vulcan Lover by Stephanie
posted by AcidBanter
You say you've got no emotion, but I know that can't be true
'Cuz I see the way you look at me when you think I can't see you
Just put your hand in mine and we'll kiss all night long
Oh, why won't you be my Vulcan lover?

I'll help you out every seven years when it's time to go through pon farr
We won't have to take you to Vulcan when your behavior gets bizarre
Your higher body temperature...
continue reading...
2
Why do they doubt ?
posted by 1billsookie
Even based on the evidence to the contary, many people belive that Kirk and Spock only had a friend, or at the very most a brother relashoship. They take the evidence from the show and from Gene Roddenberry, take it out of context, remove what they don't want to see, then they take it and use it to say "See that proves they weren't love." They are looking at Kirk and Spock through homophobic glasses. They are letting the era in which they grew up, socitey, or their reglious belifes cloud their perseption. If Kirk or Spock were shown acting the way they do with each other with a woman would there be any doubt that they were in love with that woman ? No there wouldn't be. So why do people still doubt that they were in love with the other ?
You Might Also Like...