"This baby squirrel coils up into a tiny ball while his doting mother gently carries him across a branch and to the safety of his nest.

"The affectionate parent was taking her young son to their dray by softly picking him up by her mouth as he clung on to her fur.

"The mother, an African tree squirrel, scurried along the branch with her child wrapped around her and took him to a new nest she had just finished building.

"Morkel, 28, who was on holiday with his wife, said he just happened to be in the right place at the...
continue reading...
1
"Peanut Butter & Love: Squirrel Returns to Trees Thanks to Good Samaritan"
posted by SRitchieable 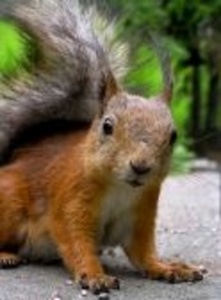 Skippy the Squirrel
This article is reproduced verbatim from link by Laura Simpson.

The article came originally from: link

I was driving home from work one day with my son. As we passed a squirrel that had been hit on the road and was presumably dead, I glanced in my rearview mirror and thought I saw him twitch. I immediately pulled over and walked back to the squirrel lying in the middle of the road. Sure enough, he was still alive. And with every passing car, moved ever so slightly with what little life he had left in him. I knew from past experience — my younger...
continue reading...
1
Squirrel sighting text scheme relaunched in Aberdeen
posted by SRitchieable 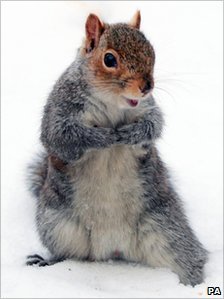 This article is reproduced verbatium from the BBC website.

"A scheme to collect information on squirrels by texting sightings has been relaunched in Aberdeen.

"The aim is to collect data on squirrel distribution by getting residents to report seeing squirrels by sending a text message.

"Text-A-Squirrel was first launched in the city last year as a two-week pilot.

"Sightings can be reported by texting RED or GREY, followed by the area, street or postcode where it was seen, and the person's name, to 88802.