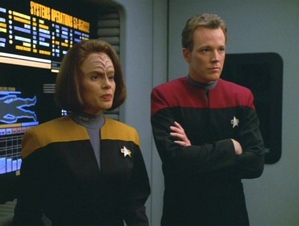 I might as well be honest. I wish I could be objective about the ”STAR TREK VOYAGER” Season Three episode, (3.24) ”Displaced”. But I cannot. My feelings for this episode are too strong. Let me explain.

Lisa Klink wrote the teleplay for this episode about Voyager’s crew members being replaced, one-by-one, with aliens from an unknown race. While arguing over a Klingon workout program that Chief Helmsman Tom Paris had created for the Holodeck, the pilot and Voyager’s Chief Engineer, B’ElannaTorres, are interrupted by a strange alien that has appeared aboard ship from nowhere. This phenomenon occurs over and over again, until both Captain Janeway and Commander Chakotay realizes that this new alien race – called the Nyrians – are bent upon taking control of Voyager . . . but without the use of brute force. Eventually, the entire crew end up as prisoners on a habitat that also contains prisoners from other races whose ships and colonies were also conquered by the Nyrians in a similar manner.

Amidst the alien takeover of the ship, the continuation of the blossoming relationship between the ship’s Chief Helmsman, Lieutenant Tom Paris and Chief Engineer Lieutenant B’Elanna Torres hits a snag. In a previous episode called (3.23) ”Distant Origin”, Paris had made a bet with Torres over the reason behind a ship malfunction. The Chief Helmsman won the bet and Torres was forced to participate with him in a Klingon exercise program in the Holodeck. Being inclined to avoid her Klingon heritage as much as possible, Torres resents that Paris is interested in all aspects of her entire self – both Human and Klingon. And later in the episode, both Torres and the Doctor revealed Tom’s own insecurities and his tendency to use jokes to hide them.

Temperatures seemed to have played a major role in ”Displaced”. From Paris and Torres’ heated argument over his Klingon martial arts program to the Nyrians and Torres’ low tolerance of cold temperatures, and to finally the warm reconciliation between the two future lovers inside the Holodeck. It was good to see Voyager’s crew – especially Janeway and Tuvok - work at retaking control of Voyager by utilizing the Nyrians’ teleportation system. I especially found Janeway’s ultimatums for the Nyrian leaders inside their habitat rather satisfying.

But what really made this episode rocked – at least for me – was the continuation of Paris and Torres’ courtship that began when the Chief Pilot made his first overture in (3.04) ”The Swarm”, earlier in the season. By the time ”Displaced” had aired – some twenty episodes later – Paris has been in earnest pursuit of Torres. Lisa Klink had wonderfully brought out Paris’ determination to reveal to Torres, his interest in everything about her – and that included both her Human and Klingon sides – despite how she may have felt about the latter. Klink also did an excellent job of revealing the pair’s insecurities, which ended up providing many roadblocks to their romance and eventual marriage over three years later. Late Season Three and early Season Four had featured some of the best moments in the Paris/Torres relationship. At least until Season Seven. And among those gems included scenes from this episode.

Below are what I consider highlights from ”Displaced”:

*Paris and Torres’ quarrel over the Klingon martial arts program
*Tuvok’s revelation to Chakotay about his survival training experience on Vulcan
*Chakotay’s attempts to defend the ship from the Nyrians, reliving his old role as a Maquis captain
*The Doctor’s exposure of both Paris and Torres’ insecurities inside the Nyrian habitat
*Torres’ ”I’m not hostile” conversation with Harry Kim and his fearful reaction to her tone
*Paris and Torres’ frozen adventures inside another Nyrian habitat
*Janeway and Tuvok’s efforts to gain control of the Nyrians’ teleportation system
*Janeway’s confrontation with the Nyrian leaders

As I had earlier stated, I wish I could be objective about this episode. But how can I? Even after eleven years, I still love it. Lisa Klink’s teleplay seemed to feature everything – adventure, romance, humor, intrigue and rich characterization. It is easy to see why I consider ”Displaced” to be one of my favorite ”VOYAGER” episodes. 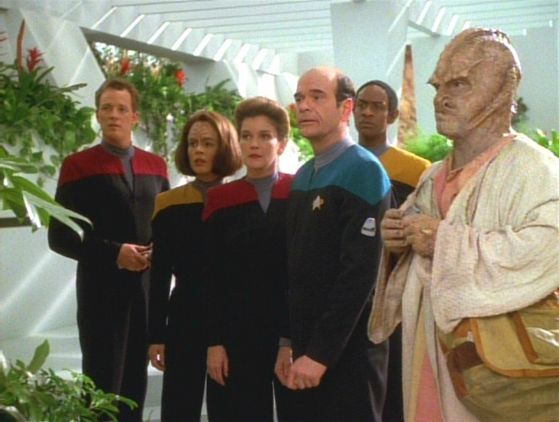 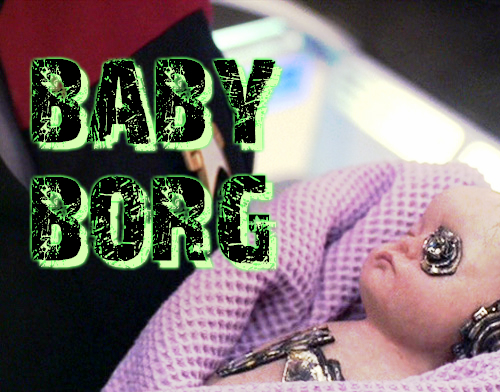 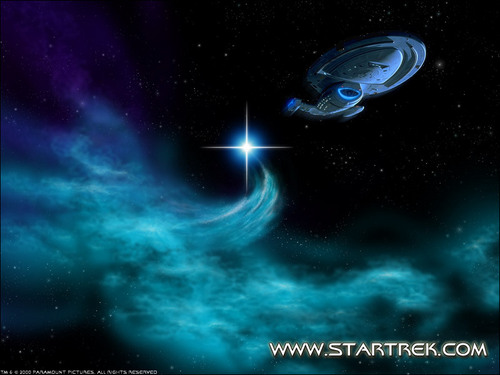 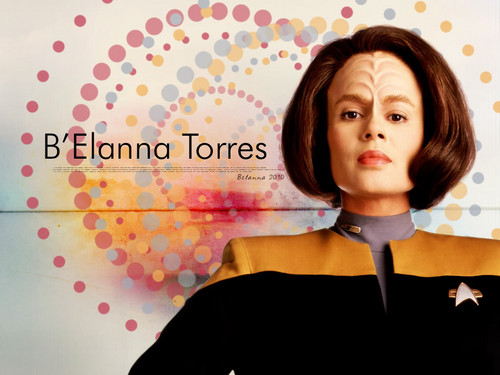 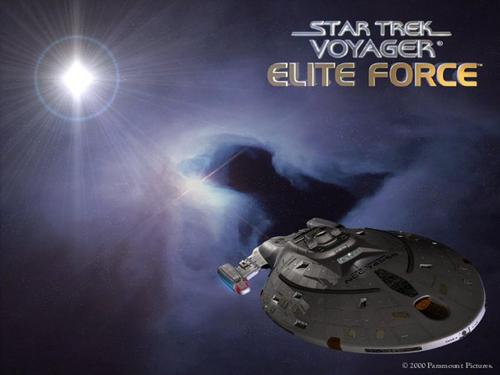 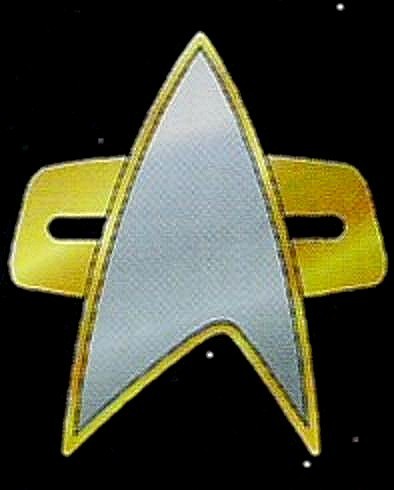 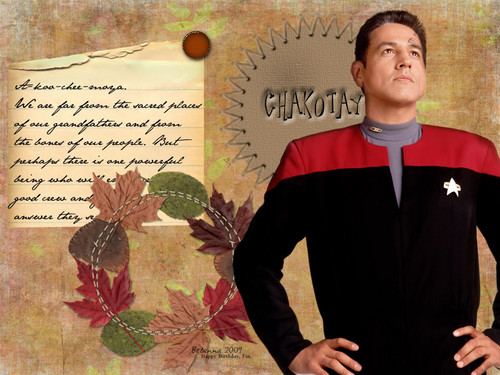 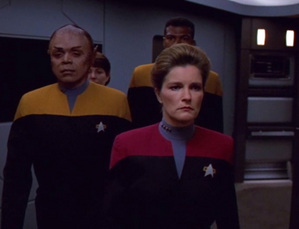 
Below is a list of what I believe to be the top ten (10) most depressing or darkest ”STAR TREK VOYAGER” episodes:

1.    ”Memorial” - Chakotay, Tom Paris, Harry Kim, and Neelix begin to experience strange visions after an away mission. Voyager’s crew discover that the four had earlier encounter a war memorial that convey memories of a past military massacre. (Season 6) 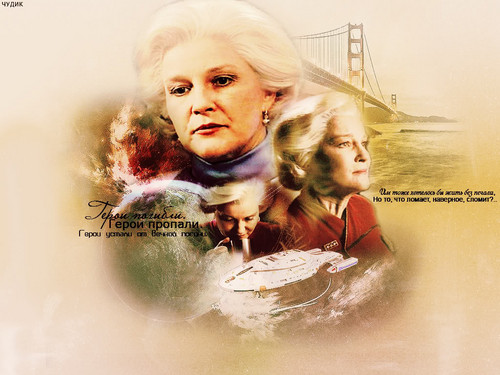 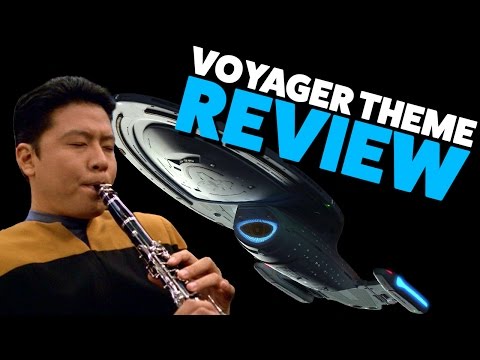 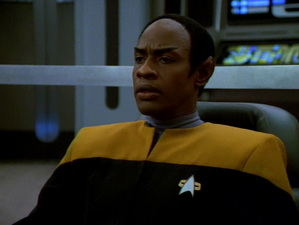 Do many STAR TREK fans consider most Vulcan characters unfit for command? I wonder. I came across this "STAR TREK VOYAGER" fan fiction story about the letters written to the Alpha Quadrant by Voyager’s crew in the Season 1 episode, "Eye of the Needle". The author of this particular fan fiction story seemed to believe that because of their emotional distance, Vulcans are basically unfit for command. Personally, I disagree.

This belief that Vulcans were unfit for command certainly seemed supported by Lisa Klink’s screenplay for the Season 2 episode,...
continue reading... 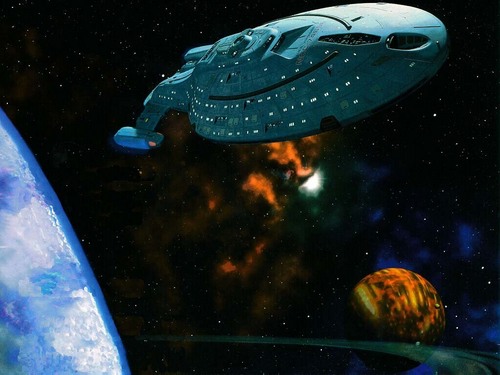 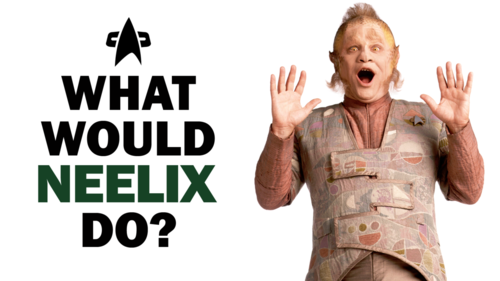 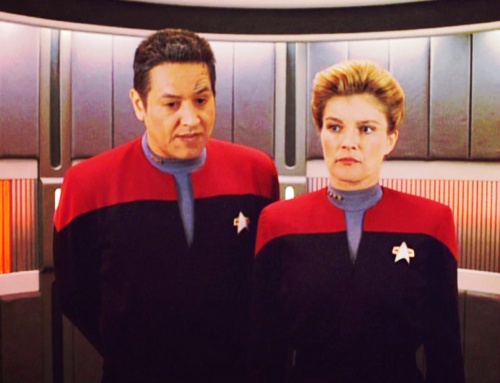 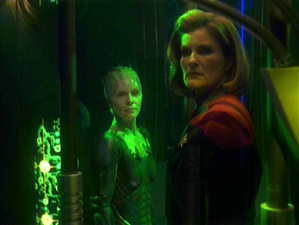 This two-part episode of ”STAR TREK VOYAGER” centered around the Voyager crew’s attempt to save Borg drones who are trying to develop individuality. (6.26) “Unimatrix Zero, Part I” aired at the end of the series’ sixth season and (7.01) “Part II” aired as the premiere for the series’ seventh and final season.

When Seven-of-Nine began having dreams about a beautiful forest, she eventually discovered that the forest is a real subconscious realm inhabited by the minds of certain Borg drones during regeneration...
continue reading... 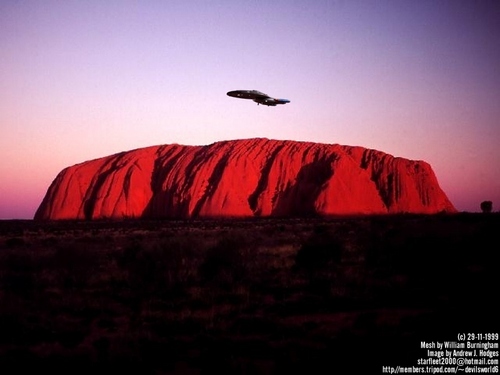 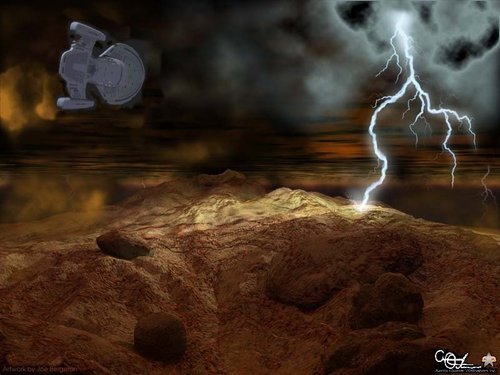 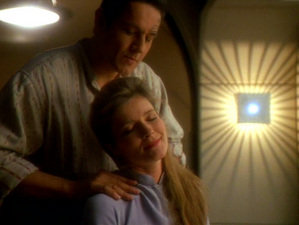 I am not going to deceive myself and pretend that the relationship between Captain Kathryn Janeway and her First Officer, Commander Chakotay, lacked any chemistry. Of course there had been chemistry. Even a blind person could have sensed the chemistry between them just by listening to their dialogue. But while I will admit the enormous dynamics between the two characters, I never could see the possibility of a "happily ever after" for them. Not while the pair served as the command team of the U.S.S. Voyager. 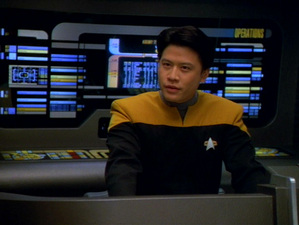 Over six months ago, I had posted an article called "STAR TREK VOYAGER" - Unfit For Command?. In it, I had expressed my displeasure over the portrayal of Security/Tactical Officer Tuvok in the ”STAR TREK VOYAGER” Season Two episode, (2.25) "Resolutions". After viewing the episode for the umpteenth time, yesterday, I decided to focus upon another member of the Voyager crew, Ensign Harry Kim.

In the article about Tuvok, I had pointed out that screenwriter Lisa Klink had managed to regress and completely misinterpret the Vulcan’s character...
continue reading...
More Cards
1234567891011