"Can you please stop shaking your leg Nakoma?" Obi-Wan asked in a hoarse voice. Nakoma stopped shaking her leg feeling worse. She let her nerves get to her way too much. "It's alright." Obi-Wan reassured her. Nakoma gave a small smile. There was a knock at the door and...
continue reading...
unfinished3prt1
posted by lovingflame
Sharp knocked on Ahsoka's door. "Come on or we'll be late." Ahsoka leaned heavily on the door jamb as she opened up the door.
"Stang it.You're not going anywhere. Get back in there, I'm calling the doctor." Sharp helped her sit on the tub's edge as he put the call into the doctor. As Sharp went out to wait for the medics, Ahsoka grabbed a look at herself in the refresher's mirror.
"This doesn't look so good. What's going on with me?" She said as blood was starting to bead and her stomach turned.Turning her a very pale shade of green." Where's the patient private?" The resident doctor said making...
continue reading...
Returning the favor
posted by mhs1025
Nakoma was getting ready for a party when she stumbled upon a picture of herself and her family. The picture made her think about her brother. "My life would be complete if you were here." she said in sign language. Nakoma missed her little brother. Even though she never got to meet him, she still thought of him every hour of the day. She sighed. "Maybe Anakin will help." she said again in sign language as she went to get her master to let him know the party was about to start.

As Nakoma quietly opened the door, she smiled at a sleeping Anakin. Anakin had gotten back from yet another grueling...
continue reading...
4
Star Wars the Clone Wars Season 1 Episode 14 Defenders of Peace Alternate Ending Chapter 1
posted by GalindaGirl
This happens not to long before the end of the episode, after the battle. And the Republic Fleets don't arive. This isn't my best, but it was fun to make. I decided to do it in first person. And I know this is kinda corny in some parts, I only started it yesterday. I don't own any part of Star Wars.

It was over, the crazy madness with Anakin being injured, and being stuck on the planet. I, Ahsoka Tano, and Commander Bli were starting up the engines of the ship they stole from the Separatists, the republic didn’t find them, but they were still getting off. But when I turned on one of the engines,...
continue reading...
unfinished part3
posted by lovingflame
The fundraiser was a mess of royals and other such dignitaries. Rex thanked the force, that the senator had given him a book on ettiquet days before. Though as it was he couldn't recall a damned thing. Women old and young had practically hounded him since he'd been announced. It hadn't mattered that he was a clone or a mere captain. The old ones wanted to dance, while the younger ones wanted something in a different direction all together. The young men present engaged him in talking about sports and what lady or ladies had caught his eye. He talked adamently about sports,but the women. Well...
continue reading...
2
Eeth Koth Captured!
posted by DSDG
In Mygeeto space on board the Spirit Of Kuat a Venator-Class Star Destroyer. On the bridge of the Spirit Of Kuat General Eeth Koth was talking via hologram when all of the sudden flak burst around the ship. 3 Separatist Banking-Clan Frigates had followed Eeth Koth's ship now it was a fight for his life. “All men to your turbolaser stations!” “Red Alert”. As Clone Trooper Gunners rushed to the Turbolasers a Prow Laser Cannon from one of the 3 Frigates hit one of the 8 engines and blew up one of the 8 turbolaser gun emplacements! “Sir” said Commander Val Eeth Koth's second incommand...
continue reading...
A Mission to Complete: Chapter 1
posted by StarWarsFan7 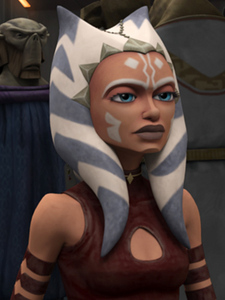 As you can see, the name is Ahsoka Tano. I'm seventeen years old and a jedi knight. My master and I had just returned from a very important mission in the legendary Citadel. I have to tell you, it was very dangerous! Can't believe I actually sneaked my way there! Of course, master Plo Koon didn't actually send me there. He denied my suggestion but I went there anyway. I love Master Plo! He's like a father to me. Only I don't know my mother or father anymore...Oh who cares? I'm a successful jedi knight and a padawan to Anakin Skywalker! Everything's pretty normal! "So tired..."...
continue reading...
2
Battle of Teth Aftermath Chapter 2
posted by captainrexbest

Rex woke and put his armor back on as quietly as he could so he wouldn't disturb Ahsoka,who was still sleeping.Rex went down to the Chief Petty Offcier's Mess to eat.Only CPO's and above ranks were allowed in there.Rex liked it there because there was barely any troops that came in that section of the ship.When Rex had got there it was empty accept for...Ahsoka?
"Ahsoka,when did you get here?""I heard you get up.When you left I took the shorter way,you took the long way.""I know I took the long way miss smarty pants.""Whoa,Rex what's got you all worked up?""Nothing.""It's gotta be something,well,what...
continue reading...
Rako Hardeen
posted by kelseyjayne25 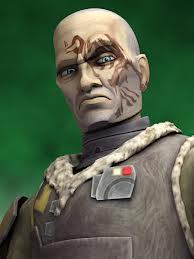 Obi-wan stepped out of the transformation chamber, once again feeling himself but without the beard. He wouldn't feel completely himself until his hair grew back. With help from a special pill, that wouldn't take long, thankfully. He made his way to the prison, Rako Hardeen's clothes in a neat pile in his arms.

When he arrived before Rako he said "Well Hardeen, you are free to go now. For your trouble I can help you secure the ship of your dreams and here are enough credits for a crew, along with your payment for the job we hired you for."

Star Wars: Attack of the Clones 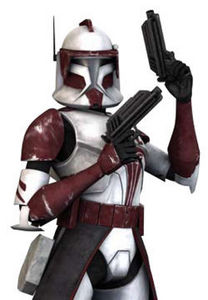 Blaster fire rocketed past my head, shattering the stone wall behind me.
These bounty hunters are becoming pretty bold, I thought, either that or
just more stupid. There was a time when they wouldn’t stray too far from the
safety of the Outer Rim, but now they were almost a regular sight on the back
streets of Coruscant. Count Dooku and the Separatists were willing to pay a
hefty sum to anyone who could kidnap a member of the Galactic Senate, so
any fool with a blaster and a starship headed here, to my town. And as the
commander of the Coruscant Guard, it was my job to stop them. The Guard was
made...
continue reading...
3
"Fortune cookie quotes" for season 1 and 2 (the little sayings at the begining of each show)
posted by jedigal1990
Due to boredom and someone on facebook who was curious to know all of them i decided to write all the beginning quotes of season 1 and 2 enjoy

Duel of the Droids- You hold on to your...
continue reading...
The Clones and which episodes they are in etc.
posted by kelseyjayne25
Rys, JJeck, Thire -> Season one Disc One "Ambush"
Matchstick, Tag -> Part of Anakin's Gold Squad died "Shadow of Malevolence"

Broadside -> lives until movie 4, part of Gold Squad in show

Niner and Bel ->season one disc two "Lair of Grievous"

Mack-> died in crash:...
continue reading...
A friend in need
posted by mhs1025
Anakin was sound asleep when he heard faint crying. He thought he was dreaming and went back to sleep. The crying was heard again. Anakin soon realized the crying was real and went to go check on that person. He searched, but no one was in sight. He continued searching, but still no one. Just when he was about to give up, he heard and saw the person. And boy was he pained when he saw who it was.

"OBI-WAN!" Anakin yelled as he rushed over to Obi-Wan's side. "What do you want, Anakin?" Obi-Wan asked in a teary voice. "I want to help you." Anakin answered. "I'm quite alright." Obi-Wan replied trying...
continue reading...
unfinished revision of chapter 2
posted by lovingflame
Master Yoda entered the room cautiously as he heard the sudden silence. The woman, her back towards him. Unguarded. She stood as an open book,nothing stopped the feelings from wrapping around him. Feeding on his Force. He gasped at it,making the woman turn in his direction. Morgan took a step back as she saw the small creature stagger into the room. As he fell she went to him kneeling."Are you alright?" Morgan reached down a hand to help him. Yoda felt his Force returned double that which he'd lost.Opening his eyes, he stared at the deep green eyes. No. She didn't even know what had happened....
continue reading...
Battle of Teth Aftermath chapter 1
posted by captainrexbest 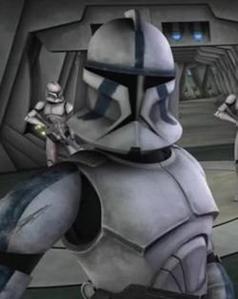 At the request of General Skywalker Rex agrred to take Ahsoka on a 3-day respite aboard Gilad Pellaeon's Leveler.Accompanying them were 8 other clone troopers:sergeants Coric and Denal, and six new clones by the names of:Ross,Boro,Joc,Hil,Vere,and Ince.Fresh from Kamino,they were the only clones that rex had ever met that couldn't get along.They argued about every little thing.Rex tried every thing he could but they just wouldn't get along.Right now they were argueing about what the Leveler[i/]was like.Finally,Rex couldn't take it anymore.
"Will you guys SHUTUP?!you argue about everything...
continue reading...
Jedi Master Di's valiant last stand
posted by idiot1
The Twileks had escaped to the mountains,and Jedi Master Di and Clone Captain Keeli with their platoon of troopers stood to face the droid onslaught. Their objective:Buy the Twileks enough time to escape.
"Remember We need to buy as much time for the Twileks as possible" Di reminded his men.
"Yes Sir" replied Cove a trooper. The droids were advancing. Di jumped out from behind a large rock.
"For the Republic! For the Twileks!" Di said.
And with that signal the platoon jumped out from behind cover and opened fire on the droids. Cove jumped out with his blaster but right when he popped out a Super...
continue reading...
3
Lorrettai: Chapter One
posted by starwarsfangirl
This is about my Original Character, Lorrettai Hunalo.
Wondering how to pernounce that? Lor-et-tie, Who-n-all-oh. :)
Okay, please read.
COMMENT!
I <3 feedback!

Intro:
Anakin was running. Not for his life or anything big like that, just for some peace and quiet, away from Ahsoka and Obi-Wan. He turned a corner and pressed up against the wall.
“Uh, sir, what are you doing?” Rex had been walking by when Anakin made his appearance.
“Uh… nothing, nothing at all, why, what are you doing?” Anakin replied quickly, walking away. Rex stared after him, completely bewildered.
As soon as Anakin knew...
continue reading...
RexXAhsoka: Episode 5: The Battle of Love Begins part 2
posted by StarWarsFan7 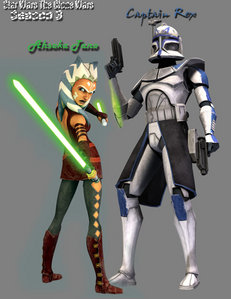 Rex and Ahsoka are packing their things before they leave for Saleucami.

Rex is on his way to see his love, Ahsoka.

Ahsoka: Well, I'm gonna be on my way to Saleucami and you are too.

Rex: I'll miss you ever second you're gone.

Ahsoka: Don't worry. We can contact each other with our holo projectors and comlinks.

Rex: No matter what-

He holds both of her hands in both of his.

Rex: We'll always be together.

He kisses her gently and leaves.

Ahsoka feels something in her hands. It's Rex's most prized possesion. The logo of his favorite bolo-ball team. It's in the shape of a star.

Ahsoka puts it in her "Treasures Box".