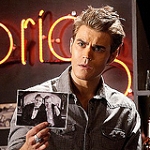 For the first two seasons of CW’s big hit THE VAMPIRE DIARIES (Thursdays at 8 PM), it was easy to tell the two vampire Salvatore brothers apart. Stefan, played by Paul Wesley, was the good one who never wanted to kill humans, and Damon, played by Ian Somerhalder, was the bad one, who killed whoever and whenever he wanted. In Season Three, the tables are turned. Stefan has let his inner Ripper emerge, and Damon, along with Stefan’s human girlfriend Elena (Nina Dobrev) are desperately trying to restore Stefan to his old self.

Wesley is having a blast with the changes in Stefan. This isn’t the only supernatural character he’s portrayed – back in 2006 and 2007, Wesley was half-angel Aaron Corbett in ABC Family’s FALLEN, based on Thomas Sniegowski’s novels. He’s also been a werewolf and a Luthor. He talks about violent Stefan, quasi-angelic Aaron and his other paranormal gigs here.

ASSIGNMENT X: Were you looking forward to playing Stefan as an absolute badass this season?


PAUL WESLEY: Yeah, more than anything else. I want to play a variety of different characters in my life, and I didn’t want to be stereotyped, so it’s a great opportunity for me to do something different.

AX: Were you just hoping that character development was going to come along, did you know that was coming, or was that a big surprise?

WESLEY: No. I told [series producers] Julie [Plec] and Kevin [Williamson], “Look, I’d really love to do something,” and they said, “Great,” and they agreed. We don’t want anything to be redundant – we want to keep it fresh for the viewers.

AX: You’ve played some other horror/sci-fi/fantasy characters prior to Stefan …

WESLEY: I played Lucas Luthor on SMALLVILLE. I did a [werewolf] show called WOLF LAKE [on CBS]. And then I did a pilot for the WB that didn’t get picked up. 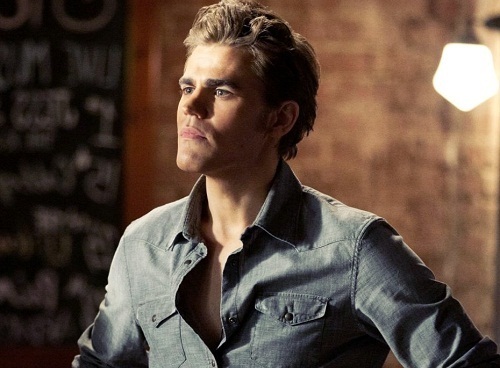 AX: Stefan is a big change from your last series regular, Aaron on FALLEN. When you did the telefilm version of that, did you think it was going to go to series?

WESLEY: When I shot the pilot, I knew it was a two-hour movie regardless. I knew that it was going to air. I knew that the production quality was really phenomenal. I wasn’t sure if they’d be able to afford it [as a series], because there [were] so many special effects and so many action sequences. But I wasn’t incredibly surprised. It was my fifth pilot, and it was one of the better ones I’ve done.

AX: Were you familiar at all with the Tom Sniegowski novels that FALLEN was based on?

AX: How would you describe Aaron?

WESLEY: Sort of a recluse, a little dark, sort of uncomfortable in his own skin, not sure who he is. He’s not sure of himself. He’s a good soul, he’s a good person, he’s young. He still wants to grow and he’s got adult responsibilities, so I think he’s got a lot on his shoulders, but overall, I think he’s strong.

AX: Do you do anything differently when you’re working in the genre than when you’re doing straight drama?

WESLEY: I think it’s really more about the human condition and you’re basing it in reality. Regardless of what the circumstances are, you need to base that in reality. You need to be a human being on Earth experiencing this. If you look at it as, ‘Oh, this is just a fantasy,’ then you’re not bringing true emotion to it. You can’t look at it in a biased way, you have to sort of objectify the whole thing.

AX: When you’re acting these things, do you come up with analogies in your mind, like, “Well, I don’t really bite people, but if I was hitting someone …” or “I don’t really fly, but if I was riding a motorcycle …” or do you think, “Okay, I’m someone who flies or bites people, and this is how I feel about it”?

WESLEY: It’s interesting. I don’t know if I actually even analyze it to that extent. I think a lot of it is instinctual. I truly try to imagine what it would be like, not for [the character] but for Paul, to be experiencing these things. So I guess I use analogies. I think my methods change, is really what it comes down to.

AX: Physically, what’s the hardest thing you’ve done as an actor? Wire work, where your character is flying or leaping superhuman heights?

WESLEY: [Wire work] sucks. I hate it. I’m not going to lie. It literally hurts. You have a scene where you have to act, you have to be in character, and then you have this incredible pain in your groin area, because your entire weight is essentially on this wire on your groin. It’s awful. Anybody that says it’s fun is completely lying. But, am I going to suck it up and then when I see the final product am I going to be happy that I did it? Yes. But if you’re going to ask me [laughs], it’s not fun.

AX: Are you pleased/surprised/gratified by the ardent fan following that VAMPIRE DIARIES has acquired?

WESLEY: Oh, my goodness. It’s a dream come true. Nobody wants to be on a show for seven years that has a low following. That’s what you want to do – you want to excite people of all ages, and I feel like VAMPIRE DIARIES does that. It’s not just young kids or young girls – it’s a lot of them, but it’s also a lot of people my age and it’s nice.

AX: And what would you most like people to get out of VAMPIRE DIARIES at this point?

WESLEY: I just never want anybody to know what to expect, to know what’s coming next, from the actors or from the writing. 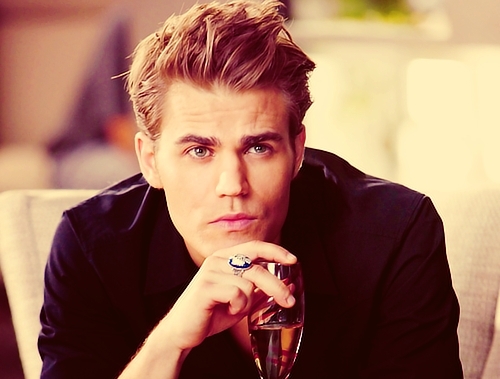 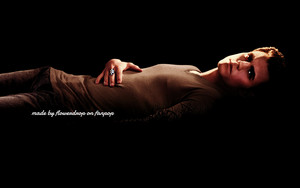 Stefan Wallpaper ✯
added by flowerdrop
Source: made by me - flowerdrop 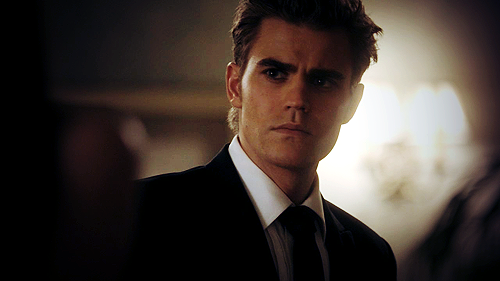 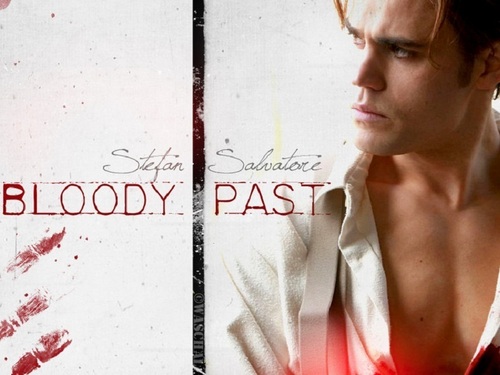 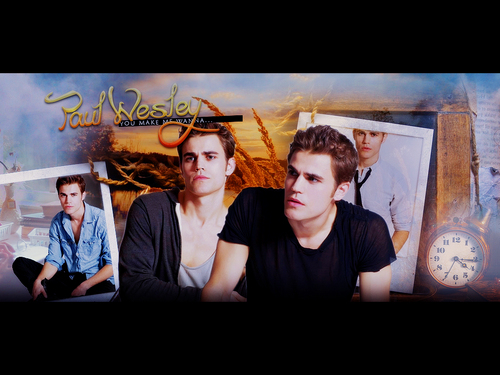 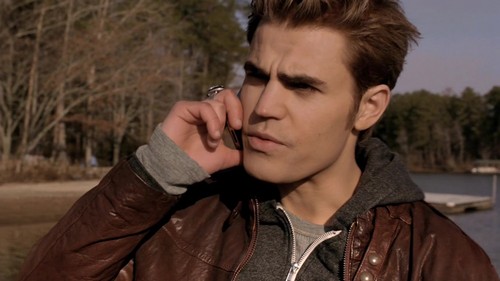 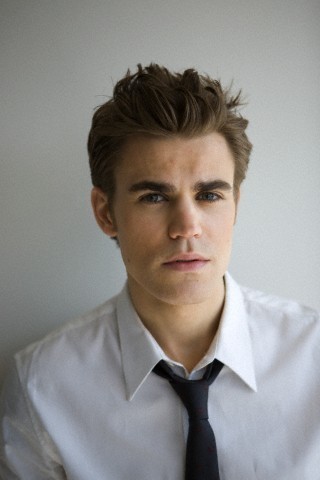 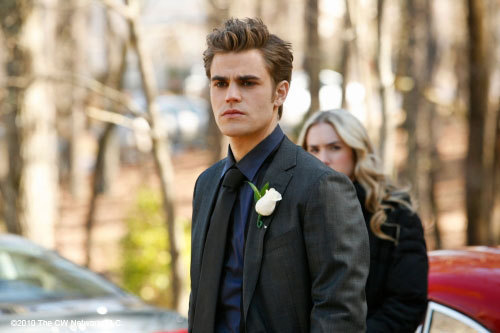 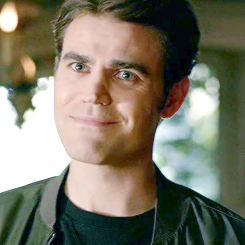 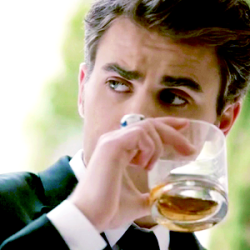 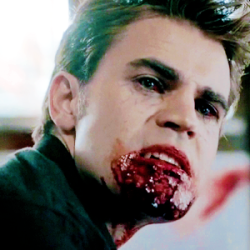 I don’t want to survive… after what I’ve done, I just want it to be over.
added by alittlelamb