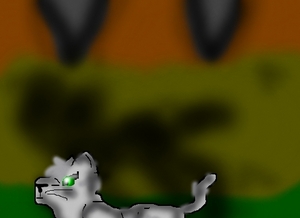 the second n first reincarnation look identical!
A cold breeze chilled the fur of a huge gray tabby she-cat. Past battle scars bathed her fur, under her recently groomed gray pelt. She stood in the center of the StormClan camp, which was surrounded by many high trees and a wall of bushes, keeping the camp a secret protection from invading clans.
The whole of StormClan cats surrounded her, as they watched in silence as Stormstar faced her deputy Nightbreeze with a glare. Both deputy Nightbreeze and leader Stormstars pelts were bristling and claws sheathered as they argued.
"Your a traitor Nightbreeze! Your not fit to be leader!" Stormstar snarled.
"Your only saying that because i refused to follow your orders, once in my life! I have my own free wll you know!"
"Leaders word is law and Your turning the clan against me!"
"They chose for themselves not to obey!"
"With your guidence!"
"I didnt force them to do anything!"
Both she-cats snarled at eachother for hours before Nightbreeze finally decided to end the conversation.
She let out a hiss "think what you want! Im out of here!" and with those words, Nightbreeze fled through the ferns out of the StormClan camp. Her black tail tip was the last Stormstar had seen of her.
Stormstar looked around at the wide-eyes of her clanmates as they stood gasping infront of her. She knew most of her clanmates agreed with Nightbreeze and some were even thinking about becoming rouges, for they didnt want to be in a clan where they thought they didnt get to have an opinion. Primpansy and Threshpaw, who were two loyal cats to her, watched her with pitiful eyes. She knew they would never threaten to leave, like most but yet, they were torn.
Stormstar let out a growl and padded heavy-pawed into the forest. As soon as she was through the ferns out of the StormClan camp, Stormstar glanced back. What has happened to my clan, she wondered, what ever happened to the close bonds we once shared? Stormstar then shook her heead, and ran the rest of the way to the river.
By the time she reached the fast flowing water it was midnight. Stars lit up the cold, dark night sky. Stormstar licked up a few drops of water, before prickling her ears at a loud roar coming from the south.
Curiousity carried her paws, as she padded over to explore what it had been. As Stormstar approached she saw a thunderpath. Stormstars ear twitched in confusion, what was a thunderpath doing here? She glanced both ways before padding onto it and sniffing the hard black cement.
Another loud roar appeared, Stormstars head shot up and she tried to race off the thunderpath. Stormstar sighed with relief as her paws rached the dirt, but yet the car was out of control and drove right off the thunderpath. Stormstar tried to think fast, then realized maybe if she jumped up onto the hood of the car, she wouldnt get hurt!
So as it reached her, she tried to jump on the hood but as it raced forward, she banged against the windsheild.
Stormstar dropped to the ground, blood trickled from a cut on her forehead. Her whole body felt weak with pain while a new gash of blood had formed on her ribcage. She listned in agony as the foolish driver drove away, her blood now staining his windsheild.
Stormstar tried to stand, but couldnt even successfully lift her head. Where did things go wrong, she wondered, losing my clans trust is even more painful then my wounds.
"Maybe I should just lay here and die" Stormstar mumbled. Stormstar then spotted a star in the night sky, much brighter and more welcoming then the others. It warmed her heart and she could help thinking of earlier, happier times.....

Stormstar closed her eyes as the memories raced through her mind. A small orange tabby she-cat padded towards her and touchde noses with her. This small she-cat, was named Bloodpaw and she was Stormstars first apprentace. Stormstar watched as Bloodpaw progressed over the seasons, her determination and commitment to please Stormstar and hold her loyalty to her clan filled her mentor, Stormstar with pride, until the very day when Bloodpaw earned her warrior name, Bloodpool.
Then another memory entered Stormstars thoughts, it was of her sister Wavestorm. She could still remember when she had first begun to gather cats for the clan. She had found a gray tabby run-away kittypet, and had later discovered this she-cat who Stormstar had developed such a close bond with was her sister, Wavestorm.
Next Stormstar thought of everyone of her clan she had come to care about in the past and so on.
Then, another memory entered her mind. It was of her death in StormClan many years ago. She had known that her time to die had almost arrived so she passed on leadership to a new but loyal warrior, Fernstar. Afterwards, Stormstar left StormClan and traveled for many days, until she couldnt travel anymore. Her last life fadded as she laid down and died of old age.
The next time she opened her eyes she was in StarClan, with her love Nightstar, both of her old kits Bluefire and Stone, and reunighted at last with her past friends and kin, like Wavestorm and her other littermates.
But years later, Stormstar was called to earth by her clan. Fernstar had failed at leadership and StormClan was nearly abandon. Stormstar would no longer just sit by and watch so she reincarnated herself into a new gray tabby she-kit with green eyes. Although, even in her reincarnationed state, she had her full memory, and never forgot her destiny, to take back StormClan!
Once old enough, her new reincarnated body left her rouge mother and littermates and traveled back to StormClan. Once back, she rebuilt her lost clan and was once again reconized as Stormstar, while given nine new lives!

Now, Stormstar regretted telling no one her secret, of how her wounds had all vanished, and how she had lived longer then any known cat. Maybe it was best if they didnt, after all some secrets are better left secret.
Stormstar felt the life fad and the next time she opened her eyes was in StarClan.
Nightstar and Stone stood before her. "Welcome back" Stone joked. Nightstar cuffed him over the ear and padded over to touch noses with Stormstar.
Stormstar met there eyes but even as she remained silent, she could feel her clan calling her, like her duty wasnt fulfilled yet.
"Your going back again, arent you" Nightstar said solemly. Stormstar nodded, so Nightstar rubbed heads with her one last time, whispering. "Its okay if you find a new mate in your new reincarnated state. I dont mind." Stormstar met his eyes, "not in a million years" she purred.......... 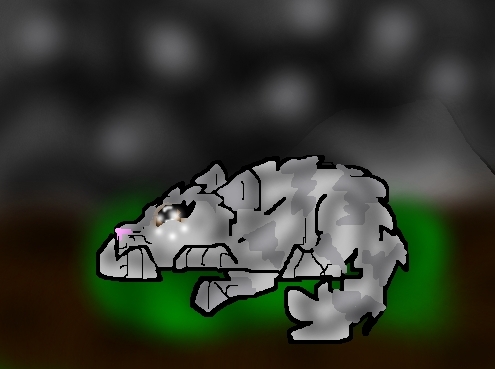 Stormstars thrd reincarnation doesnt resemble her as much as her 2cnd but one quality all 3 had in common waz the rear back right paw, which is always darker then the fur. I drew this as the third reincarnation of my charactor! its just a kit! awww! So cu
More Cards
1234567891011