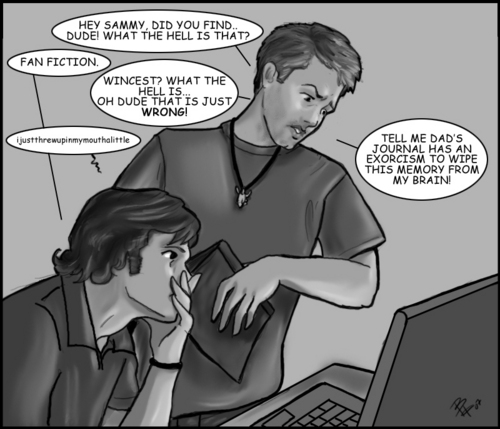 7
SPN Fanfiction
added by LEH-Pjevsen
1
Three's a Crowd chapter 6 Death Wish (8/10)
posted by HaleyDewit
Cas eyes flashed open as he lay on the bathroom floor. With some effort he managed to sit up. He looked aside to the ground and noticed the many empty strips. He picked up a few and examined them.
“What?” he mumbled weak and confused. It had never been his intention to swallow every pill in the medicine cabinet and he knew that it was a miracle he was still alive. He let the strips fall out of his hand and he crawled slowly and difficult to the toilet.
As he tried to reach the toilet he was thrown back against the wall. A part of him tried to keep the drugs in his body. But another part...
continue reading...
1
Three's a Crowd chapter 6 Death Wish (4/10)
posted by HaleyDewit
“What was it?” Meg asked sharp, forcing Cas to look at her by grabbing his shoulders. “What did Heather give you? If it’s something dangerous…You know medicine can kill you, don’t you? If you take too much of it”
Cas freed himself and turned around. “Yes, I know that. I am not stupid” he snapped, while he rubbed his fingers. “I don’t know what Heather gave me. All I know is that the pain is gone and isn’t that exactly what we wanted?”
“Well, if you don’t know then I guess I’ll have to ask someone who does” Meg replied cold. She turned around and wanted to leave...
continue reading...

2
Supernatural Fanfiction • Daddy Won't hurt You!
added by LEH-Pjevsen
It's written on the concept "What if Sam and Dean had had Max's childhood?" Story: link
video
supernatural
fanfiction
dean
sam
winchester
Three's a Crowd chapter 3 Fever (5/10)
posted by HaleyDewit
“Your résumé is extremely…blank” the man in the temp job office noticed as he looked at the paper Meg had given him. She had written it this morning. “You’ve worked as a nurse in a mental clinic for some weeks. Do you have a degree as a nurse?”
“Yeah” Meg nodded. “I should’ve brought it with me”
“Why don’t you go home and come back with your degree. Then, maybe, I can do something for you” the man said.
“All right” Meg answered and she got up. She turned around and left the office. She leaned against the wall and took a deep breath. She didn’t have a degree....
continue reading...
What Happened in Colorado chapter 19 The Trial (1/10)
posted by HaleyDewit
The next morning.
Cas was sitting in the court room. The judge had sat down and ordered everyone to follow his example.
“The defendant may stand up”
Craig poked Cas to let him know he had to stand up.
“Castiel, you’ve been accused of pedophilia of the four year old Alexia Moore” the judge said.
“I didn’t do it” Cas said desperate. He searched the room to find Sam and Dean. They were in the back. Jo wasn’t there. Cas didn’t blame her. They didn’t know each other that well.
“There’s enough damning material to believe the opposite” Daphne’s attorney said.
That comment caused mixed reactions. On one side there were those people who believed Cas was guilty as charged and who wanted him convicted. On the other side there were those who thought he was innocent and they were not pleased with the words of the attorney.
“Silence” the judge said and he knocked with his hammer.
“Your honor, if you allow me, I’d like to summon my first witness”

Daphne threw her arms around Zoey and Zoey faked a few tears and sobs. She pushed Daphne away and said she had to tell Alexia. She put her purse on the dresser, knowing Daphne would see the letter and be too curious to leave it where it is.
And indeed, a minute later, Daphne stormed outside, hysterically crying how everything was her fault.
Zoey walked back inside, trusting Daphne would need some time to calm down. She opened Daphne’s computer and connected a portable hard drive to it. The hard drive contained a fake video of Cas doing things with Alexia.
Zoey copied the video to Daphne’s files and then removed the hard drive. She closed the computer and called Alexia.
“Let’s go, Lex” she said. “We’re going to your grandparents”
What Happened in Colorado chapter 8 Cutting and Carving (6/10)
posted by HaleyDewit
Zoey was sitting at the kitchen table in Daphne’s house. After her appointment with the dentist Zoey had decided to have a coffee chat with her sister.
“How are you doing?” she asked casual.
“I’m doing fine, Z” Daphne answered.
“Are you still taking your medication?” Zoey asked insisting. Daphne frowned, annoyed. “For goodness sake, Daphne, it’s for you own good and ours. The doctor didn’t prescribe you these pills for nothing”
Daphne stood up angry. “I know what they are for” she snapped. She sighed. “I feel good, Zoey. Emmanuel is really good company. He makes...
continue reading...

1
Keep Breathing - Supernatural Fanfiction
added by LEH-Pjevsen
Fanfiction: Jennifer Moore. About Sam, Dean, and Jenny. Jenny is Jess's little sister who lived with her and Sam. It basically is about the effect that Jess's death has on Jenny. Story: link
video
supernatural
fanfiction
sam
dean
winchester
What Happened in Colorado chapter 22 If I can't have you (9/10)(FINALE)
posted by HaleyDewit
Ellen and Jo, who had been told the guys were back in Colorado, were staying in a different motel. They didn’t know where Dean, Sam and Cas exactly were.
Someone knocked and Ellen, who didn’t know how Zoey looked like or that she was on the loose, opened the door and looked straight into a gun.
“Where is Cas?” Zoey asked cold.
“You must be Zoey” Ellen concluded. She took a few steps back and Zoey came in.
“Where is Cas?” Zoey repeated her question a little sharper.
“He’s not here” Ellen said. “You better put that gun down. You don’t really want to do this”
Zoey looked...
continue reading...
Three's a Crowd chapter 22 The Funeral (7/10)(finale)
posted by HaleyDewit
Meg was sitting at the kitchen table with a glass of red wine when someone rang the bell. She ignored it, but the visitor wouldn’t leave. When Meg could no longer pretend she didn’t hear the incessant knocking, she stood and staggered to the hallway. She opened the door and gazed at Jo, had a bag with her.
“Can I come in?” Jo asked and without waiting for an invitation she entered the house and walked past Meg. “I’ll take this to the spare room. Don’t worry, I’ll find it myself” She walked to the stairs and left Meg somewhat stunned.
She checked a few rooms, until she found...
continue reading...
Three's a Crowd chapter 22 The Funeral (3/10)(finale)
posted by HaleyDewit
Meg was standing hesitantly on her front porch. It was the first she’d come here after Cas’ death. It had been sealed until now, so she had been forced to stay with the brothers. Sam had been nice to her, but Dean had constantly shot her angry looks.
“You want me to go inside with you?” Anna offered.
Meg shook her head. “No, I can do this. It’s just a house” she convinced herself, but her feet refused obedience.
Anna took Meg’s arm and flew them inside. Meg looked around. Nothing had changed. There were Crowley’s ashes on the floor and even Cas’ vomit.
“I’ll clean up...
continue reading...
Three's a Crowd chapter 22 The Funeral (1/10) (finale)
posted by HaleyDewit
One week later.

Dean, Sam and Meg were standing around a grave. Cas’ grave. After hours of interrogation the three of them had been released, but Cas’ corpse had been confiscated until now. There had been an autopsy and of course the police wanted to know where he’d get the burns. Sam, Dean and Meg had agreed on a story about self-defense and once the police had bought it they were free to go.
They heard loud voices and laughter. Sam turned around irritated and saw a gang of young people heading towards them. They had two bottles of booze with them. They stopped at the grave. One of them...
continue reading...
Three's a Crowd chapter 21 The Exorcism (10/10)
posted by HaleyDewit
Half an hour passed by where Cas stared at the ceiling and Dean tried to talk to him. The door opened and Meg entered.
“It’s my turn” she said difficult. Dean pretended not to hear her and stayed where he was. But Cas had heard Meg’s voice and lifted up his head. He cast Dean a begging look and tried to free his hand again. But it was as if their hands were glued on to each other’s. Sam grabbed Dean’s wrist and separated the two.
“Come on, we’ll wait outside” he said and he dragged Dean out of the room.
Meg walked towards the bed and crawled next to Cas. Cas searched for her...
continue reading...
Three's a Crowd chapter 21 The Exorcism (9/10)
posted by HaleyDewit
Sam and Dean hurried to Cas and picked him up from the floor. They each threw an arm around their shoulders and carried him to the bed.
“Ehm” Meg started nervous. “Ehm…why don’t you guys stay here for half an hour? I’ll just wait outside” Without waiting for a reply, Meg walked to the door and left the room, leaving Sam and Dean alone with Cas.
Sam pulled a chair and Dean sank down on the bed. He caressed Cas’ cheek and Cas opened his eyes. Dean cast him an affectionate smile, but Cas widened his eyes and sat up, keeping away from Dean.
“Get out” he said shaking.
“What?”...
continue reading...
Three's a Crowd chapter 21 The Exorcism (8/10)
posted by HaleyDewit
Dean hurried to the seemingly unconscious Cas and turned him over.
“Cas, hey, wake up” he softly said, with a desperate undertone. He wasn’t dead. He couldn’t be. To Dean’s relief Cas opened his eyes with effort.
“Dean?” he whispered hoarse. “Is it over?” he asked, looking at the other two. Dean nodded, grabbed Cas’ hand and pulled him up. He embraced Cas as if he was never letting go. Then he felt a sharp pain in his side. He looked shocked at Cas who cast him a big smile.
“Gotcha” he said and he threw Dean against the wall.
“Dean!” Sam exclaimed and ran towards his...
continue reading...
Three's a Crowd chapter 21 The Exorcism (7/10)
posted by HaleyDewit
Dean parked the Impala on the driveway and walked to Cas and Meg’s house. Sam helped the priest get out and they followed Dean to the house.
They walked upstairs to Cas and Meg’s room. Dean walked in first and swallowed when he saw Cas had gotten even weaker. They were barely on time.
The priest held his steps when he recognized Cas’ face.
“What’s the problem?” Sam wondered behind the priest.
“That’s Castiel Novak” the priest started.
“Yeah” Dean said obvious.
“Though when I first met him, on his wedding day, he went by Emmanuel. He pretended not to know who he was. It...
continue reading...
Three's a Crowd chapter 21 The Exorcism (6/10)
posted by HaleyDewit
“Is it better yet?” Meg asked careful, knowing better. Some cold water and cream weren’t going to help. Cas needed medical attention.
Cas shook his head, trying really hard to keep it together. “No” he said difficult. “I need a doctor”
“We can’t take you to a doctor, Cas. Everyone out there is looking for you” Meg explained remorseful.
“Then get Anna here” Cas panted. “She can heal people”
Now that Cas had said it Meg could slap herself. Why hadn’t she thought of that herself? She looked at the ceiling and called for the angel.
“Why are you calling me?” Anna...
continue reading...
More Cards
1234567891011