2
The unexpected...
posted by Animetama
I opened my eyes as they chased across the pitch black room. But of course, I knew exactally where I was~ ♥

Holding my love tightly to my chest as he slept like a baby in my arms~!

But he wasn't there, we had won the last challenge back in Japan, but I....I began to freak out!

Oh my only true love! My litte adorable Cody! Where did you go?! Why aren't you here?!

I was chocking on the air around me, my throat tightend and a tear droplet escaped my right eye. But then I stopped at thought to myself, that maybe he was somewhere else wondering around the airplane? It's not like he got kiddnaped! Right?

I got up and stood straight and thought of the first thing that he would do in the middle of the night.

That's it! Going to the bathroom!

So I went straight into the only bathroom around...

but there was no Cody.

I checked the other room where everyone else was sleeping, I couldn't see all that well because of how dark it was, but I saw no one moving. Just the rats and bugs crawling across the hard cold floor.

Finally I had searched everywhere, but he was nowhere to be found! I began to panic agian! What if he was kidnapped?!

But there was one place I had never check, which was the storage room...

...the only place left to look. As I slyly tip toed downstairs I brought a flashlight with me. Once I got down there I flipped the switch and the light painted a better view fr me.

I heard something, it sounded weird, I came closer to the sound and hid behind some wooden boxes. It began to sound more like kissing noises!

I was about to loose my mind, Cody was missing and there were kissing noises down here!??!?! What could've this all ment!??!

I jumped out of my hiding place and flashed the light on the two of them, "AHA!" I loudly grunted.

But something wasn't right....

Cody was shirtless (not pantless), and turned around in shock at me. I atmit he looked hot but he was with.......

This must've been some kind of nightmare! My man! I lover! Oh Cody, he's gay?!

Some tears filled up my eyes and I wiped them away with my arm, "C-Cody..?" Was all I could say in such a high pitched tone.

Noah came up to me, he was the first to confront; "Listen....Cody and I? Yeah..." all I did was glare at Cody and say, "CODY YOU CHEATER! CHEATER CHEATER CHEATER!" I furiously pointed at him in great anger.

Then I continued on, "WE'RE THREW YOU HEAR ME CODY?!?! HUH?!!" Noah inturupted my rant and causually said, "you two were never together you realize?"

My head was spinning! I lost all control! All I could do was just fall to my knees and cry like there was no tomorrow...

Oh Cody, why did you have to be gay..?
Tdinoahiscute4 and nocofangirl218 like this
TDI_Angel XD the only problem I have is the multiple exclamation points. It's just too much. But other than that, I love this, LOL!
nocofangirl218 I loved this! :D The story gave me my much needed dose of NoCo! XD
Animetama XD ty guys!
2
the kiss
posted by ilovevladimir
noah pov:so we had to stay awake for a challenge but on the upside cody was here i couldnt help thinking[i]omg he is so adorable[i]but i couldnt really be with him like i wanted to..."noah ur staring at me again" "oh sorry" but i couldnt help blushing,then i noticed cody was falling asleep [i]he looked like little angel[i] so i went to go lay next to him and put my arm around him then i smelled his hair[i]he smells so sweet like strawberries[i]he started to cuddle closer to me and then out of nowhere i start kissing him!!!i just couldnt control myself!!![i]he even tastes like strawberries[i]...
continue reading...
6
The Sleep Kiss
posted by TDI_Angel
Just a little NoCo I whipped up. My first fanfic in a while. Rated T for safety.
-------------------------

There he was, just laying there, sweet and innocent and completely unattainable. Noah thought he looked like an angel when he slept. I sound like a ridiculous schoolgirl, Noah scolded himself, I know Cody's straight. Beside, I have a boyfrien back home, so why bother? As he lay there, he thought about Joey-- his boyfriend back home. Joey had been with him through so much, always there to help him and protect him. And Noah loved him. He didn't need some straight guy to ruin his relationship....
continue reading...

7
A seat beside Noah
added by Averylilith
Source: I don't know what to put here 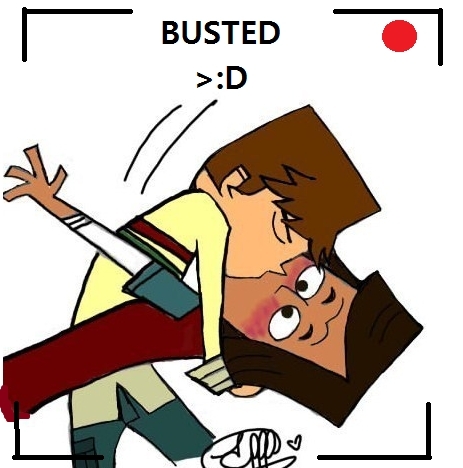 3
BUSTED >:D
added by neonwalflower
Source: fanpop and me 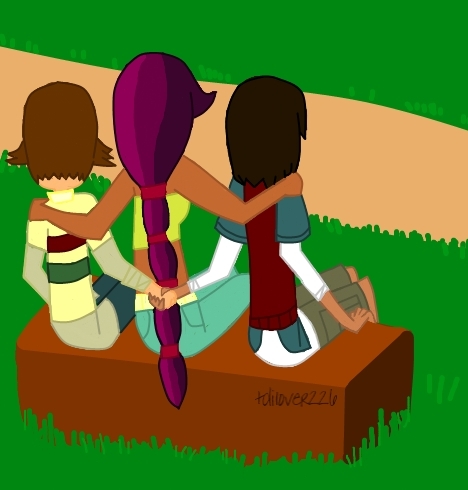 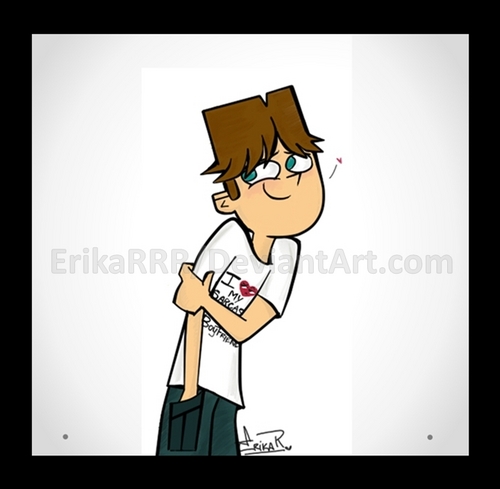 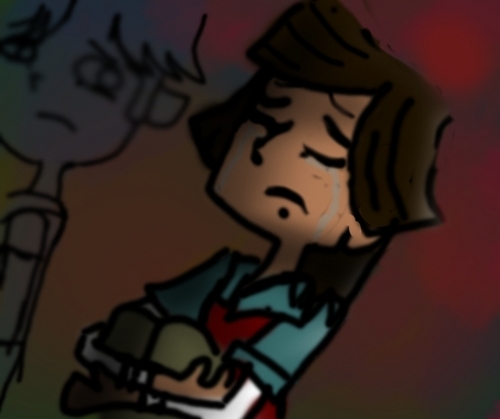 I'm not that way
added by ickybicky
Source: me! 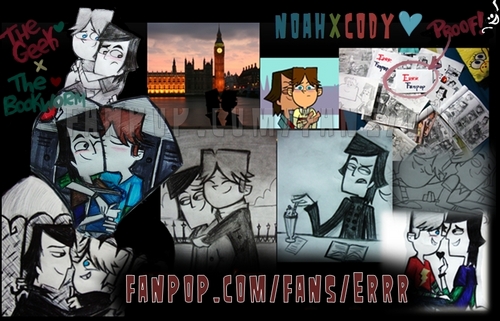 6
More of my cheesy sketches people!! :D
added by Errr
Source: NOT USE THIS WITHOUT MY PERMISSION 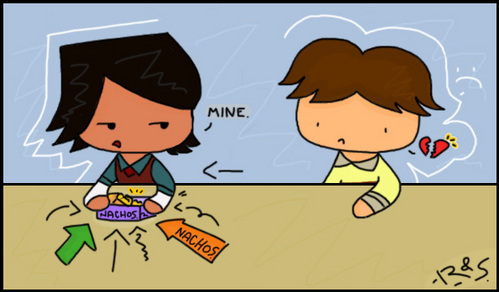 3
noah, cody and a bowl of nachos
added by luz-anwar-light
Source: I love nachos! XD 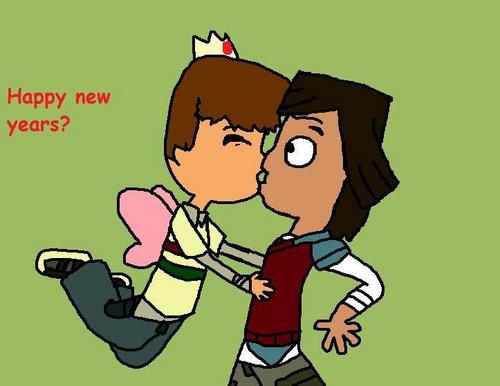 3
Yes, I know I suck
added by Averylilith
Source: NOCHXCODY 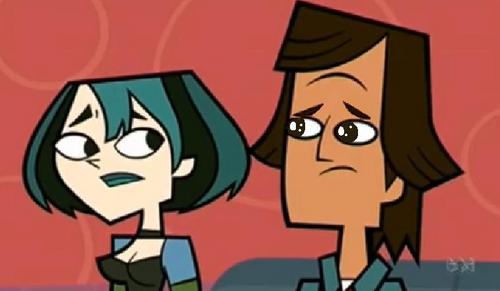 1
WHY!?
added by Averylilith
Source: What image credit? 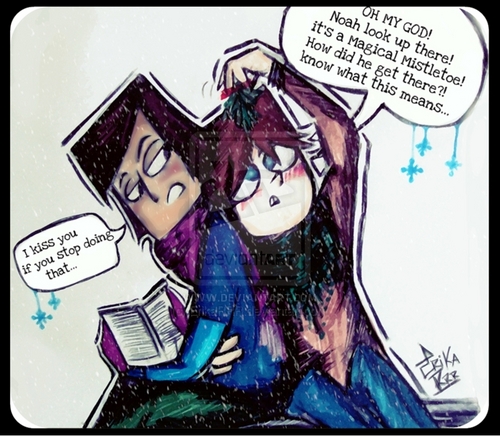 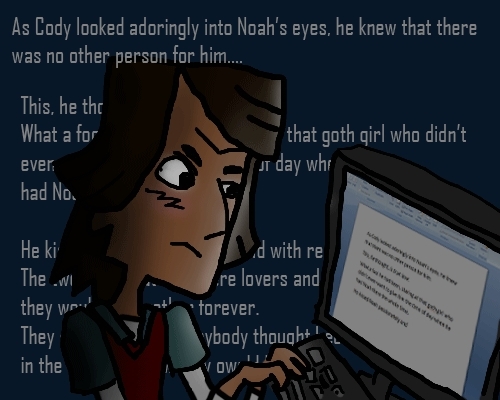 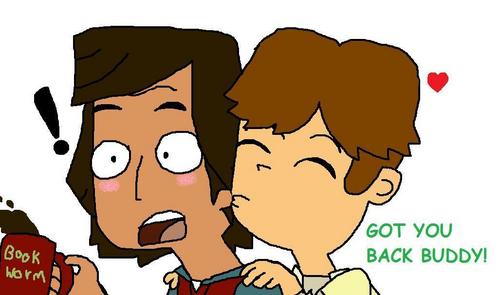 3
^w^
added by Averylilith
Source: I never know what to put here 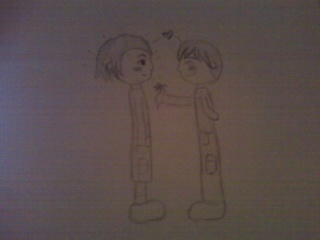 "This is the prettiest flower in this meadow. And it remined me of you." :)
added by NoahFanNumber1
Source: ME AND NOAHFAN4LIFE