11
Donna Pinciotti
posted by Leightonfan
Family, friends, and ideals
Donna resides in the fictional Wisconsin town of Point Place, where she lives with her parents, Midge and Bob Pinciotti. Early in the series, her younger sister Tina appears in one episode but is never seen again, nor do other characters ever mention her after the first season. An older sister, Valerie, is once referred to as being at college but is never mentioned again.

An intelligent, witty teenager with feminist ideals, Donna is outwardly confident and strong, sometimes to the point of coming across as arrogant or self-righteous. She calls upon these personal qualities to deal with her personal issues, such as her parents' shaky relationship, and the revelation that they conceived her while in high school.

She has some difficulty expressing her feminine side, because she views traditional feminine traits as restraining and outdated. She dislikes skirts, makeup, and dresses, and insists on wearing jeans at all times, but she will dress nice for a special occasion and tried "being pretty" for her prom and for a trip to a nightclub, where the bouncer judged her "foxy". As another exception, after her wedding with Eric was called off, she decided to change her looks and dyed her hair blonde. Jackie Burkhart repeatedly calls Donna a "lumberjack", due to her penchant for plaid shirts and her tall stature. She even described Donna by saying "[She's] nice and all, but she kinda dresses like a trucker". She also teases Donna for her large feet.

Nonetheless, Donna still considers herself feminine, at times becoming insulted when people overlook it. When Kitty Forman needed two people with a "feminine touch" to decorate for Hyde's birthday party, she chose Jackie and Fez. An angry Donna wanted to "kick her ass" for that, insisting "What the hell? I'm feminine! Damnit, why can't anybody freakin see that?!?" This suggests that while Donna takes pride in her feminist beliefs, she still considers herself feminine, and simply doesn't want to restrict herself to "girly" activities. In several episodes, she is flattered at being perceived as an object of desire, especially when she becomes "Hot Donna" at a radio station.

Jackie appoints herself as Donna's best friend in the early seasons, often giving her advice that sounds superficial and useless, but often turns out to be unnervingly true. For example, in the Battle of the Sexists episode, Jackie states to Donna that "Eric would never want her [Donna] to be his girlfriend if she kept beating him at everything, especially sports". Jackie genuinely thinks that she's better looking than Donna, ever since their first meeting in junior high, and that Donna is generally not attractive, yet still thinks Donna could do better than Eric. When angry or annoyed at Donna, Jackie will often refer to her as a "giant" or "Amazon"; when Donna goes blonde, she calls her "blonde tardo". Despite their differences, Donna eventually accepts Jackie and decides to keep an eye on her and keep her out of trouble, since Jackie doesn't always show the best common sense, and on more than one occasion, Donna has ridiculed Jackie for her stupidity and also for her small stature, calling her a "midget" or "mosquito".


Relationships
Donna's relationship with next-door neighbor Eric Forman is often the main focus of the series. However, it was tumultuous at times, having suffered two break ups during the show's run. Despite this, Eric and Donna often act as the "parents" of the group, being mature and responsible when their friends are not, as for example in episodes like Dine and Dash. Eric was sometimes threatened by the fact that he feels inferior to her, especially during the third season, when she gets a job as a disc jockey.

Donna was a virgin at the start of the first season, and was very reluctant to consummate her relationship with Eric and wanted to wait for the right time. Donna and Eric finally lost their virginity in season 2. Their sexual activity was revealed in a very humiliating manner, when a policeman caught them having sex in the back of Eric's car and took them back to his parents home, where Red forced Donna to tell her parents or else he would tell them. This further cemented Kitty's subconscious view of Donna as a rival for the role of being the primary woman in Eric's life.

In the beginning of the series, Hyde was also interested in Donna along with Eric. Donna made her choice clear, however, when she blew off her "study date" with Hyde to hang out with Eric. Even after the relationship between Eric and Donna was established, for a short time Donna usually went to Hyde when she felt unsure about her relationship and needed to talk about it. In such circumstances, Hyde usually referred to her as the "Hot Neighbor Girl" and to Eric as the "Scrawny Neighbor Boy," or some variation on these. Though a romantic relationship between Donna and Hyde was never established, Hyde initially liked Donna and would have been interested in her if Eric had not kissed her first. Hyde still tried to win Donna in the beginning, when she and Eric weren't together. There are even some comments by Fez during that season that mock Hyde over these failed attempts. When the gang went up to Jackie's fathers cabin for a ski trip, Hyde decided to kiss Donna and was slapped for his efforts, ending his infatuation but not their close friendship.

Towards the end of season three, Donna's job as a disc jockey was taking priority over her relationship with Eric, causing her to blow their dates off. While Donna genuinely felt that she was right to do this and was simply following her goals through to their logical conclusion with wanting to be a writer and a news woman, her actions provoked a bad response in the normally even-keeled Eric, who felt that Donna was not taking him and/or their relationship seriously. Unable to resolve the conflict, Eric broke up with her in the third season finale The Promise Ring. Throughout season four, much awkwardness ensued over rights to the basement and trying to find new relationships. Donna was a bit annoyed at just how many girls were interested in Eric and happily mocked him when his attempts at finding a new girlfriend backfired.

During the fourth season, Donna began dating Casey Kelso (Luke Wilson), older brother of Michael Kelso. Even though he was flaky and a few years older than her, Donna thought Casey was the perfect boyfriend, for he seemed to be sensitive, good natured, laid back, and easy-going. Eric saw Casey for what he was: an oversexed frat boy who just wanted to sleep with Donna and move on to the next girl. Eric tried to warn Donna but she ignored him, and he then threatened to hurt Casey if he hurt Donna.

After Kitty saw Donna drunk in the middle of a school day at the Hub with Casey, she rallied together with Red and Bob to bring the relationship to an end with Eric overseeing the proceedings while Hyde, Kelso, Jackie and Fez listened from the kitchen. Donna was more than ready and willing to fight for Casey, but Casey was not ready or willing to fight for her and he readily agreed to break up with her when Red put the pressure on. Casey lazily said that Donna was a great girl and fun to hang out with but he stated that a relationship with a younger girl had gotten to be too much of a hassle and dumped her in front of her friends and family. The realizations of her own over-confidence, poor judgement and being dumped in front of the people who meant the most to her came as a shock to Donna, who regarded herself as an ideal feminist, but who'd fallen for the type of man at which she always swore she'd never look twice.

Hurt, humiliated and heartbroken, Donna turned to the one person she thought still truly cared for her - ex-boyfriend Eric Forman. Eric offered his sympathy, but when a shook up, crying Donna told him she wanted to be with him again, he refused, believing that she did not really want him for who he was but simply wanted a way to feel better about herself and would most likely dump him when someone better came along. A tearful Donna pleaded with him to take her back but he refused to be her "second choice". Eric was unwavering in his decision, until his father and mother pointed out to him that he was being an idiot. Even Kitty, who normally doted over him, called him a dumbass.

Unable to handle being rejected by her first love, an emotionally-wrecked Donna fled Point Place for California, where she lived with her mother and tried to sort out her feelings. She decided she truly did love Eric and tried to call him but couldn't get hold of him; she suspected he no longer wanted her and had moved on to another girlfriend, leaving her rather depressed. But then, to her delight, Eric showed up in California looking for her, and the two reunited and returned to Point Place. When Donna came home from California, the normally easy-going Bob sent her to a Catholic school as punishment, an act that Donna deeply resented and hated for the remainder of the school year. This occasion also gave the writers/creators an opportunity to change Donna's common "lumberjack" attire as she now wore, for a few episodes, the school's uniform consisting of a plaid skirt, a white shirt, and long white socks. Her new looks also provided openings for jokes from the boys about Donna's sexiness, which underlies their views of her throughout the series, no matter what type of attire she is wearing.

In season five, Eric ignored the objections of their friends and proposed to her at the water tower and Donna accepted. Once Red and Kitty found out about the engagement, they were shocked. Kitty in particular, reacted badly, claiming that Donna was trying to snatch her "baby" away from her. Despite enduring a great deal of flak, Eric stayed loyal to Donna, and finally Red accepted his son had become a man and gave them his blessing. Donna and Eric prepared to leave Point Place together and go to college in Madison. However, just as they were packing their stuff in the Vista Cruiser, Fez and Laurie announced their marriage. Red was so shocked he had a heart attack, and as a result Eric had to stay in Point Place and help support the family. Donna also gave up going to college in Madison so that she could stay with Eric. Eventually though, their wedding fell through at the end of season six, when Eric, worried that marrying Donna would hold her back, failed to show up for their rehearsal.

After Eric's departure from the show before season eight, it was assumed that they still kept the relationship intact. However, Donna told her friends that Eric had broken up with her in the eighth season episode, Long Away, when Fez and Jackie suspected that she was cheating on Eric with the new cast character, Randy. Donna told them that Eric did this three weeks earlier (this is often described as the show's Jumping the Shark moment). There were hints leading up to the breakup when Eric called Kitty but not Donna, even though she was awake at 4 AM waiting for him to call her. Also, when Donna was at the Formans' for Red and Kitty's 25th anniversary, Eric called his parents and Kitty gave the phone to Donna, but Eric spoke to her only briefly before hanging up, claiming he had to "go teach".

In the final episode, Eric returns to Point Place for the New Year and it is revealed both still have affection for one another.

I found this on link 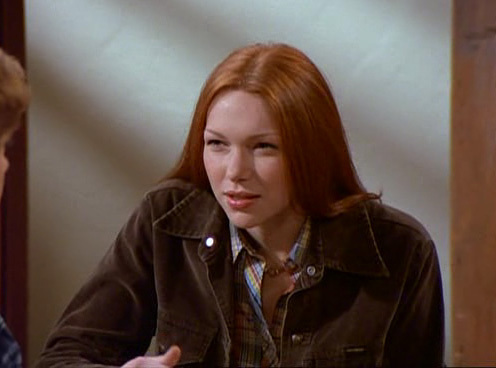 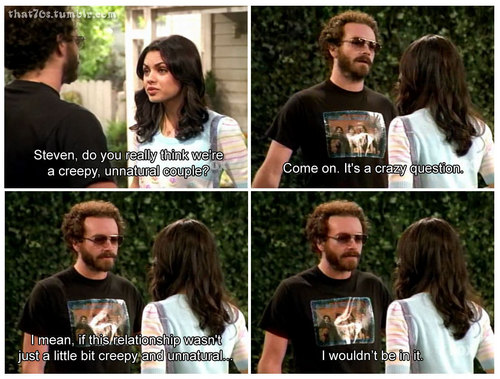 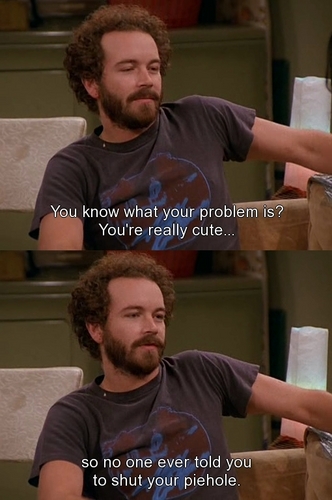 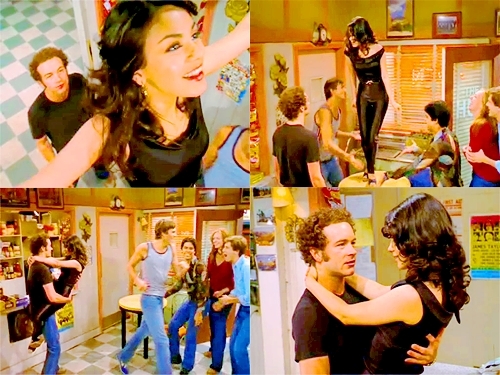 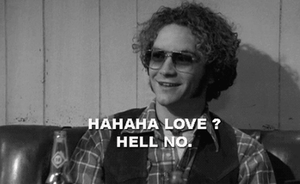 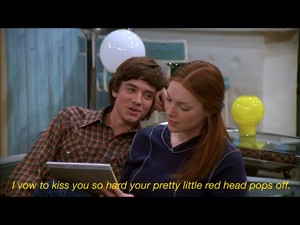 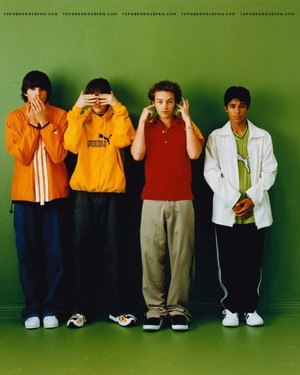 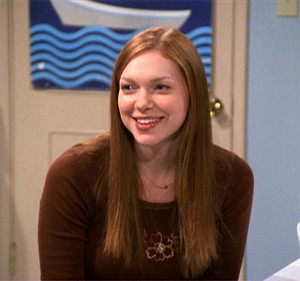 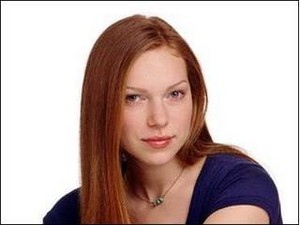 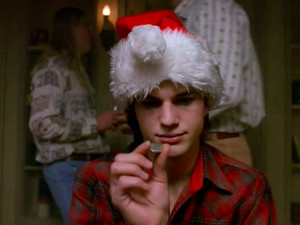 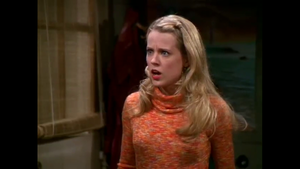 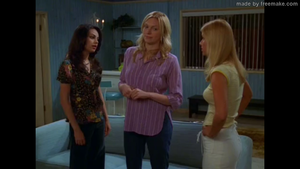 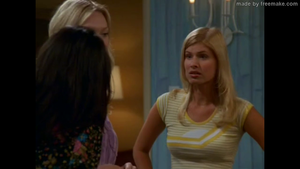 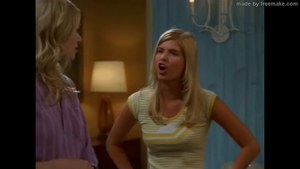 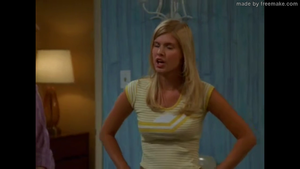