1
The Amazing World of Gumball The Meddler
posted by crazycow4556
The episode opens with Nicole coming home from a hard day's work and falling asleep on the couch next to her husband, who is busy watching television. Gumball comes home shortly after and tries to share stories about his day at school to his parents, but neither of them pay attention. Feeling neglected, Gumball storms off to his room and accidentally wakes up his mother in the process. Nicole apologizes to Gumball for not paying him much attention, and promises that she will spend more time with him the next day.
At school the next morning, Gumball runs into Penny in the hallway. He asks her if she would like to come and see his new cartwheel trick after school, but she explains that she wants to attend cheerleader try-outs instead. After Gumball embarrasses himself in front of her, he opens his locker and finds his mother cramped inside.

Nicole explains to her sons that she followed them to school to give them more attention all week, a plan which they find humiliating. They soon encounter Tina Rex and her gang of bullies in the hallway, who make fun of Gumball and call him a baby. Disapproving of this, Nicole tells her son to respond to Tina's teasing by claiming that she only bullies people because of her own insecurities and shortcomings. This turns out to be correct as Tina runs away in embarrassment soon after.

Jamie admits that standing up to Tina was pretty cool, but reminds him that his mother will not always be there to protect him. In response to this, Nicole takes Gumball by the hand and reassures him that she will be there for him until for as long as she needs to, which her son does not approve of in the least and runs away from her, accidentally running into Principal Brown in the process.

Principal Brown ends up having his hair shed and subsequently grown back due to the collision, and gives Gumball eight hours of detention with Nicole's "help". Over the course of the day, Nicole continues to embarrass her son, going so far to "help" as to bathe him in the shower room and burp like an infant during lunch.

During lunch, Nicole spots Penny and tries to help Gumball flirt with her by saying that he loves her and wants to take her out on a date. In a fit of panic, he slips up and accidentally says that he hates Penny and has never liked her, breaking her heart and making her cry. Enraged, Gumball tells his mother to go home and that enough is enough -- her constant meddling doing more harm than good.

On the way to her car, Nicole gets an urgent phone call from Gumball, who explains that he made a bad decision, and rushes back in the building to help him. Although initially he denies his mother knowledge of what he did, he eventually shows her his plan to try out for the cheerleading squad to try and win back Penny by beating her at her own game. Though hesitant at first, Gumball then explains to Nicole that he needs her emotional support, so they go to the try-outs.

At the try-outs, Penny performs in front of the judges -- Principal Brown and Mr. Small --, but they are both unimpressed by her performance. She explains to them that she has been having emotional troubles lately, but they stand by their decision and explains that someone would have to be pretty terrible in order for her to make the team. Abruptly, Gumball bursts through the door and after an admittedly awful performance which scores a 'zero' by both judges, Penny is given a spot on the cheerleading team.

Failing his plan at winning over Penny, Gumball is held in his mothers arms while he cries about life being unfair. However, Penny is ecstatic and excitedly thanks Gumball for giving her a chance to be on the team. She assumes that this must mean that he truly does like her and he tearfully agrees.

Gumball is then carried by Nicole to the hall, where Darwin is massaging his cheeks. He starts smiling as soon as Nicole shows up. Then Gumball and Nicole walk away with Nicole telling Gumball that he will be her "Gummypuss" even when he's 80. After they both leave, Darwin's face explodes due to all the smiling he did over the course of the day.
melodybryant likes this
The Amazing World of Gumball The Microwave
posted by crazycow4556
The episode begins with Gumball announcing to Darwin his latest creation; "the grossest thing ever." A jar filled with many gross things like bird feces and throw up. Darwin asks if he's sure his Tap Dancing Dolphin impression still holds up to which, Gumball bluntly explains "no." While they discuss what they are going to do with the jar Richard mistakes it for his coffee cup, which he grabs and throws it into the microwave. Gumball and Darwin agree to nuke it, to their convenience of the jar already being heated up in the microwave.
As it starts to burn an 'eye' forms in the muck of the jar....
continue reading...
The Amazing World of Gumball The Poltergeist
posted by crazycow4556
This is commonly mistaken as a Halloween Special.
Richard and Nicole are asleep in bed when Richard hears a low moaning sound coming from the attic. He assumes that it's a ghost and gets very scared, prompting Nicole to turn on a musical baby lamp which Richard finds very relaxing and falls asleep.

The next morning, Nicole finds Richard in the cupboard hiding from the ghost while getting another box of cereal for Gumball. Anais and Darwin question why he's pouring the cereal in his trousers and he leads them both up to the attic.

Gumball reveals that he has been keeping Mr. Robinson in the attic...
continue reading... 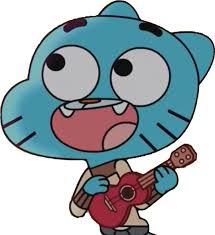 gumball playing guiter!....i don't know why i post this stuff...i am the only one here lol
added by melodybryant
Source: IDK...i am the biggest fan!
The Amazing World of Gumball The Mystery
posted by crazycow4556
The episode starts with Gumball unlocking his locker while talking to Darwin about cheese and cake. When Gumball opens his locker, something wrapped in toilet paper falls out. A crowd gathers, commenting on the gross smell and look of it. As Tobias pokes it with a stick, Miss Simian appears, angrily asking what the fuss is all about. She, too, is grossed out by the object. After ripping off part of the toilet paper wrapping, it is revealed that Principal Brown was the one wrapped up, and that he was also shaved and painted green. Miss Simian cradles the principal, then demands to know who caused...
continue reading...
The Amazing World of Gumball The Pressure
posted by crazycow4556
The episode starts with a view of Molly's tree house and later shows Molly, Penny, Teri, Leslie, Carmen, Carrie, and Masami in tree house watching boys, Gumball, Darwin, Banana Joe, and Tobias, attempting a stunt involving Gumball jumping off a ramp on a skateboard over a bus or van which ends with Gumball crashing into the van. Masami exclaims that it's lame and says they kiss boys instead. When the other girls become confused in unison, Masami questions them whether or not if they have boyfriends. Molly answers first by lying that she has a boyfriend who is older than her and goes to high...
continue reading... 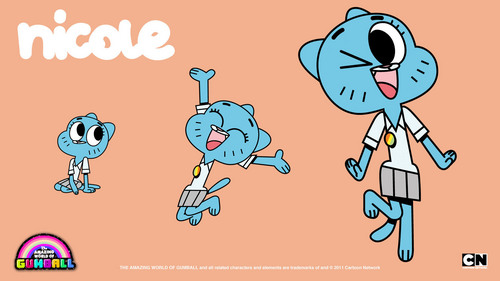 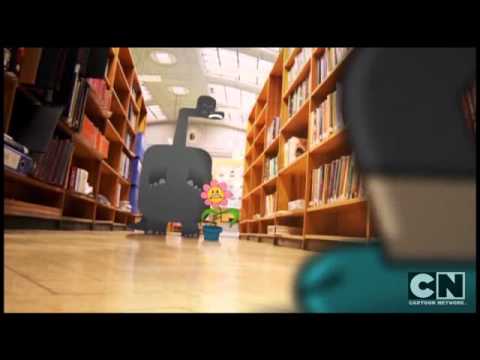 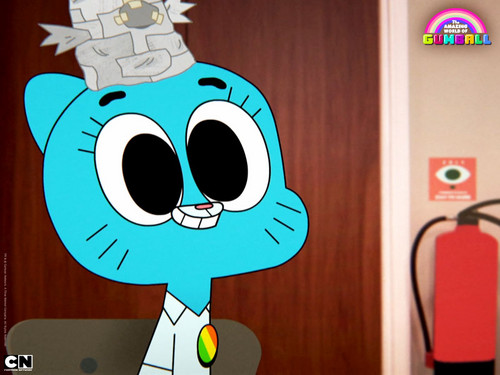 Nichole with the helment
added by crazycow4556 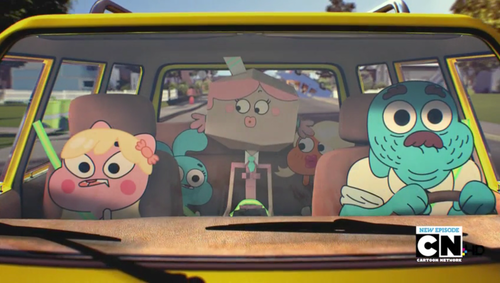 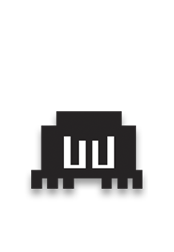 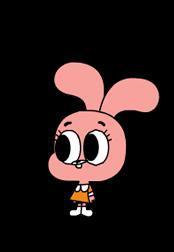 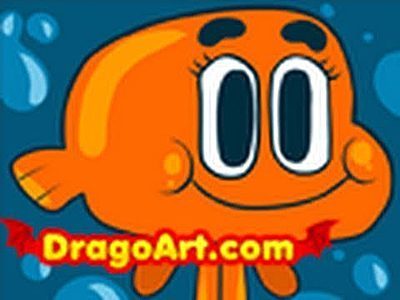 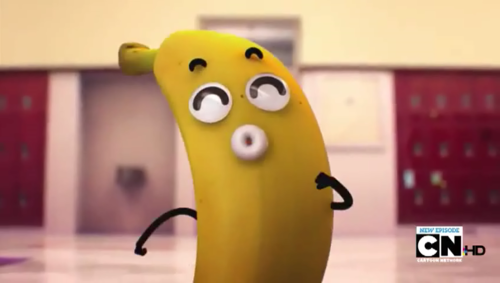 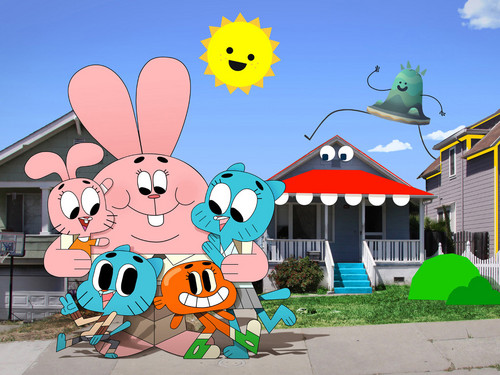 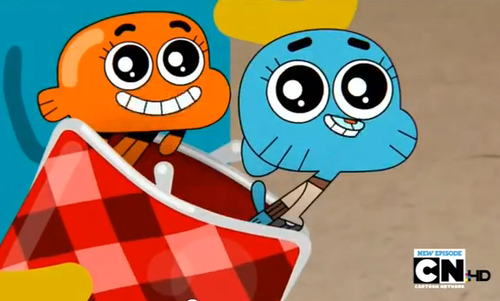 Gumball and Darwin out of a purse
added by Emo_Kill 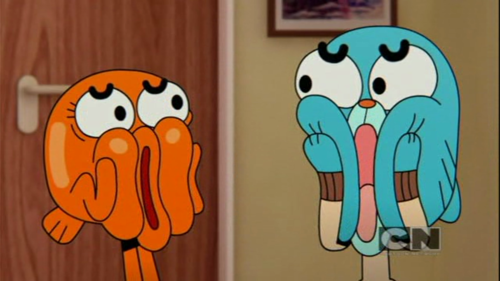 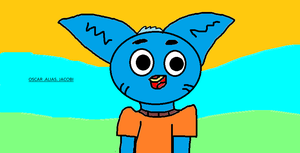