9
The Doors
posted by megloveskyle 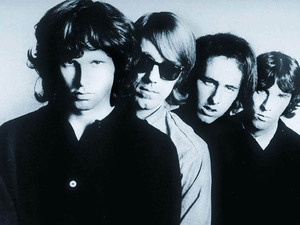 The Doors create controversy still to this day. The Doors were formed in 1965 by a few film students at UCLA. The group never added a bass player because Manzarek's electric organ and Morrison's rocking voice they needed nothing else. Drugs were a big part of the 1960's as well as with the Doors. Jim Morrison's drug addiction is no secret. That is also what is responsible for his death. But some say Pam "Morrison" (they were never married, she took his last name), might have followed through with the act.
The Doors signed with Elektra records in 1966. Their first single "Light My Fire" was a sensation. This record was one of the most groundbreaking records of all time. The Doors mixed soul, rock, classic, and poetry all together. Fans fell die hard in love with Morrison. Morrison's popularity and addiction to drugs led a spiraling downfall with took its toll in the end on the rest of the members.
In 1969, Morrison, was arrested for indecent exposure during a concert in Miami. Despite their downfall The Doors managed to spit out a few more albums in the 1970's. One of the hits included L.A. Woman, which is still very popular today.
The Doors popularity is still overwelming. Morrison has captivated the hearts of many die hard fans. He is buried in London and the cemetary had a few problems with vandalism, theft of the headstone, drug use, obnoxious fans,ect. Morrison has been dead for decades and The Doors music still lives on. The orginal members left have decieded not to replace Morrison. They have had several celebrity stand in's but due to the Morrison family and Pam's family sueing, they can never seem to get anything going. Maybe it's for the best though. I mean you can't have The Doors without Jim Morrison. His lyrics are still there but not his voice.
crazydoorsgrl, moonlightdrive and 7 others like this
DrDevience Actually, Ray & Robby have a new band called Riders On the Storm and are touring as I type this...
megloveskyle That's awesome! I am going to have to check out where they are going! Thanks Lori!
mrs_morrison His grave is in the cemetary in paris.i visited it 3 years ago on my 22 nd b-day. it was very special :) Oscar Wilde and Edith Piaf are also buried in the same cemetary.sorry, just had to say! regards, Donna x

2
The Doors-Break on through LIVE
added by megloveskyle
THis is my favorite! Break on through live!! with an intro from the remaining members. Peace!
video
jim morrison
the doors