3
3xZ's Opinions on The Flash 2x16 'Trajectory'
posted by 3xZ
As one of the most anticipated series of all time, The Flash finally returned from its one month hiatus. I have seen the teaser and promo pictures, and read the official synopsis. The Flash has been accused for going rogue as well as being send into the pipeline? Iris's potential new lover?? Most of all, the appearance of the first female speedster ever??? Well, now after watching the sixteenth episode, I couldn't help myself to write my positive and negative opinions about it. (+ is for positive and - is for negative.) Let's start right now! 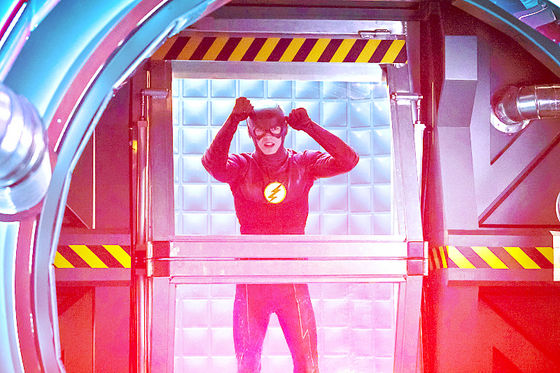 
Note: This article may often refer to Arrow (2012 TV series) since The Flash is a spin-off of Arrow, and I believe the latter serves as a template for the Flash, especially the character arcs.


[WARNING: DO NOT READ IT IF YOU HAVE NOT WATCHED IT UNLESS YOU WANT TO BE SPOILED!] 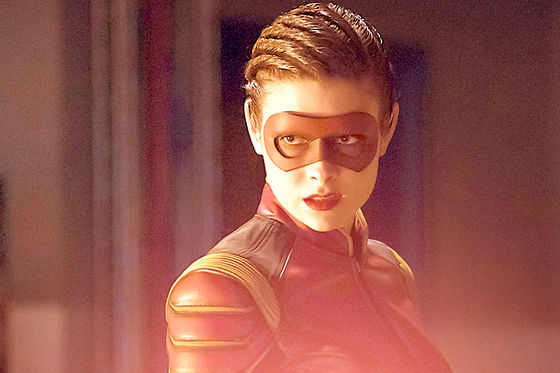 'Oh, why do the crazy ones always name themselves?' - Cisco Ramon


+ Eliza Harmon a.k.a. Trajectory, the first female speedster, is an amazing villain-of-the-week.
1. I like her Jekyll & Hyde persona (which reminds me of Willem Dafoe's link).
2. She was a brilliant but tragic scientist of Mercury Labs. Dr Caitlin Snow only gave her 3/8 components to create Velocity 9 but she could finish it herself. With that high-level intelligence, she was still underpaid and understaffed in her job, making her research six months behind, and that because she was being too perfectionist.
3. Her Hyde side really amazed me. First, she nicknamed herself 'Trajectory'. Second, she was able to put The Flash into the pipeline, an action that other evil speedsters never did before. Third, her evil goal was solely creating chaos, not desiring money, power, or revenge.
4. Though, for being a truly fascinating villain, I wish she did not die too quickly, her demise is one of the most memorable death in the series. 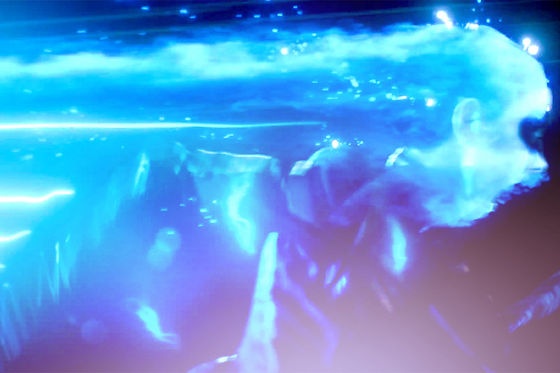 But then, still better be dead than becoming a terrible glowing blue-skinned character (yes, I'm pointing at you Electro and Dr Manhattan).


+ The word Velocity 9 (V-9), the drug for speedsters, kind of dominated the script if you noticed. I have already known that it can make the user faster than before but highly dangerous, as the series had explained in the earlier episodes. Trajectory clarified more on how V-9 worked; it makes a normal human could run even faster than a speedster, as well as side effects such as addiction and creating split personality. Moreover, when someone overdosed it, s/he ran incredibly fast that his/her lightning turned blue, but his/her cells kept degenerating that ultimately his/her body disintegrated. 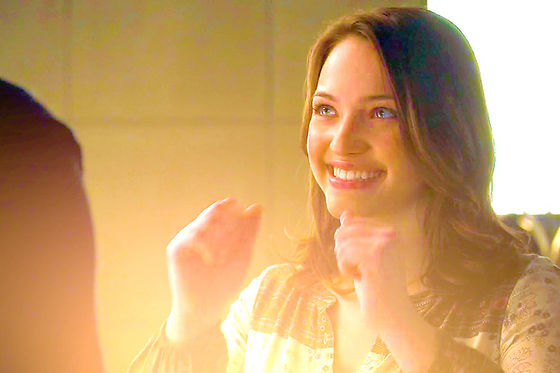 
+ Jesse Wells is the second spotlight of this episode. She had to adjust herself in Earth-1, after leaving everything without goodbye, and already becoming an agreeable member of Team Flash. I love her friendly and open-minded character. She is intelligent but not the annoying-socially-awkward-geniuses template. Especially to know that she has the prospect to become a speedster. B-but why leaving so soon, Jesse? Just because you're tired of your overprotective daddy and wants to explore Earth-1??? 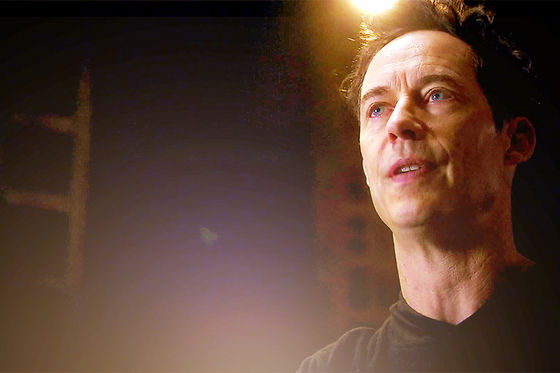 
+ I love the quotes of Harry Wells when he forbade Barry using V-9. 'You want to take a shortcut; is that right? You want to take a shortcut? Remember this. You lose a chunk of your humanity every time you compromise your values.' So true! And although Barry sarcastically replied, 'Sorry, that's really good coming from you', Harry's respond still hit the spot, 'So don't be like me.' 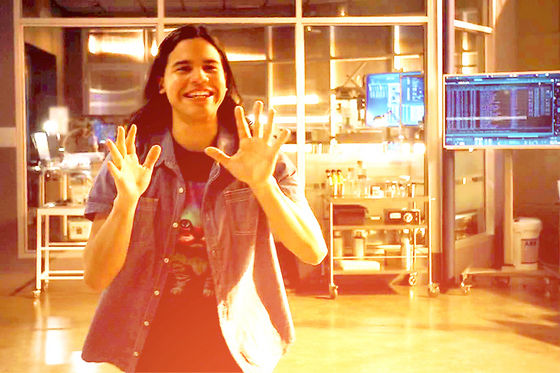 'Hey, here's a question for you, purely scientific, was she good-looking?' - Cisco Ramon


+ LOL for Cisco's purely scientific question when Barry had fought Trajectory, 'Was she good-looking?' Really, Cisco? XD Nevertheless, he is still the most relatable and comical person in Arrowverse. 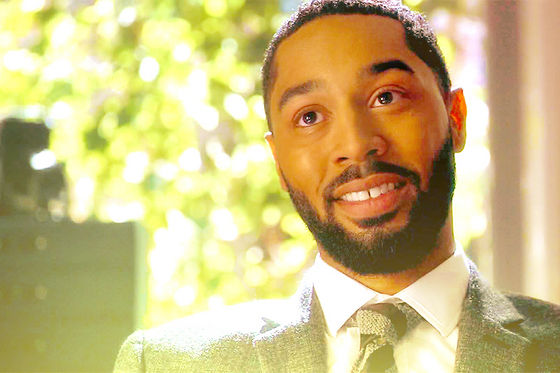 
+ Scott Evans, the new editor-in-chief of CCPN, first appeared in episode 14 and at that time I highly prejudiced him. Seeing him again, he turned out to be not dull as I thought he would be. I understand why he didn't trust The Flash, particularly when he explained the reason to Iris. Furthermore, the fact that he thought he and Iris were having a date in CC Jitters is unexpectedly nice (clearly not a WestAllen shipper here). Hopefully he will be half as good as the late Eddie Thawne. You know, he is not one of the main characters. 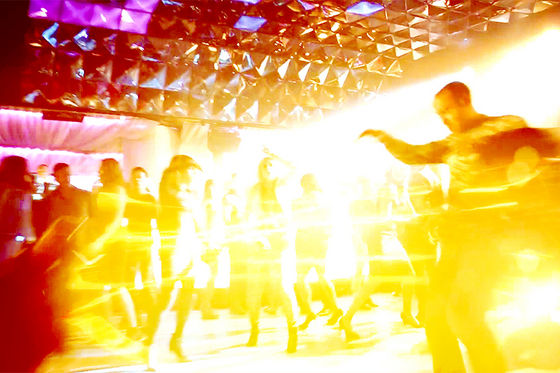 CAUTION! This is not a crazy disco dance.


- The idea where 'The Flash has been compromised' was great until I realised that the writers could never create a good plot, when it is about the hero was not actually gone rogue but the bad guys made frauds. *cough* Arrow Season 3 *cough* Iris West, the second principal character in the series, should be the one who handled this situation, but since Season 2, her stories, including this episode, were always felt like only as subplots. 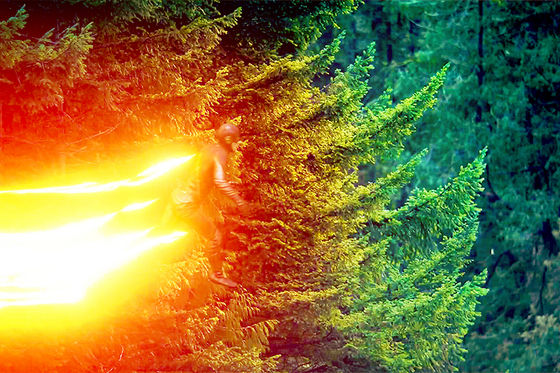 Even Bella Swan can jump off the cliffs. Meaning she ran faster than Mach 3.3???


- Now I only know two modes of The Flash:
1. He teased bad non-speedster Meta-humans by saying, 'Catch me if you can', since he is super fast.
2. Lamenting himself that he is not fast enough to save his friends and the city so he has to keep training to go faster and faster and faster. (<-- I prefer this one.)
Now, he's the second one. In fact, it's only his role. Luckily his whining stopped when he at last reached Mach 3.3 in order to stop Trajectory. 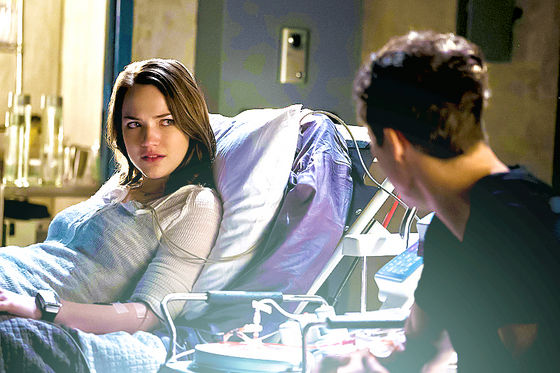 Frillion-wajillion-bazillion times we have this type of scene portrayed by various characters from Arrowverse.


- The daddy-daughter issue thing is so outdated. It has been repeatedly used in Arrowverse. Quentin-Laurel, Malcolm-Thea, Ra's-Nyssa, Noah-Felicity, Joe-Iris, and now Harry-Jesse. This time, Jesse was mad at her father because he would do anything to protect his daughter, even if it against morality. Sounds familiar? If you have also seen Arrow Season 4, 'yes' will be definitely your answer. 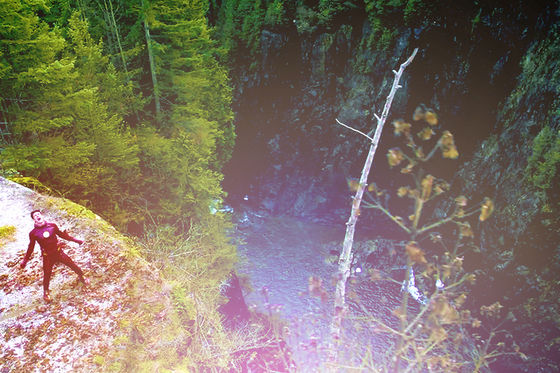 'Screaming, crying, perfect storm. I can make all the tables turn.' (credit to Taylor Swift or else I will be sued. XP)


- Two times being deceived by the main villains who acted as Team Flash's mentors. Seriously, writers of Flash? You could not make a new, better major plot twist for this season?? It is so clichéd, banal, trite, corny, and any other synonyms of lacking originality. No wonder that the end of this episode is link. 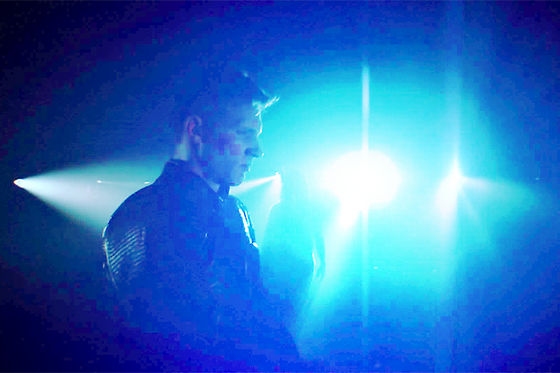 Music video of Teddy Sears's character (in case his real name is not Jay Garrick).


Conclusion: 'Trajectory' had a possibility to become one of the most interesting episodes of season 2 but it failed to meet my expectations. I blamed the writers for holding out the identity of Zoom. As I have written previously in link, I hoped they revealed the man behind the mask of the speed demon in 2x09 'Running to Stand Still'. Later, in 2x14 'Escape From Earth-2', I wished for the same since the episode is about Zoom. Eventually, they exposed his identity in the very end of 2x15 'King Shark' and the audience had to wait for a month to know more. Sure, 2x16 gave more information about him but the hype of Zoom's identity and intention are gradually loosening from me. (★★★☆☆)

BONUS IMAGE for reading my article: 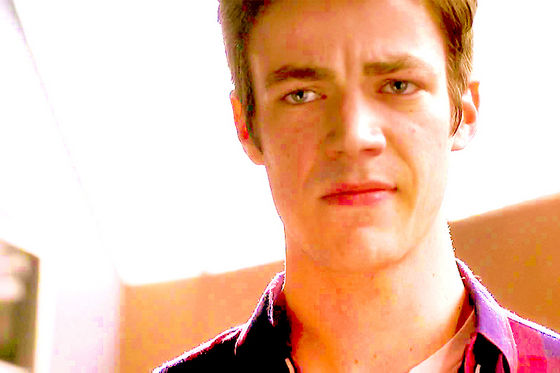 'Congratulations Team Flash, you've been fooled by your mentor again. First the Reverse-Flash, and now Zoom.'
asa101, alicemorrisca and 1 other like this
alicemorrisca it's very different from other shows as it shoot outdoor most as compare to Indore shoot by other Tv drama shows 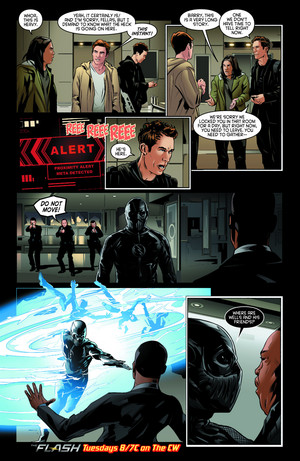 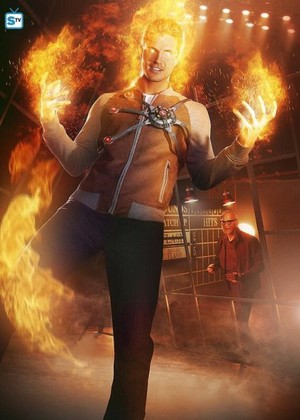 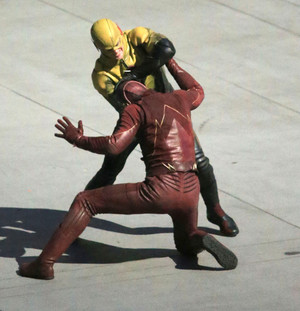 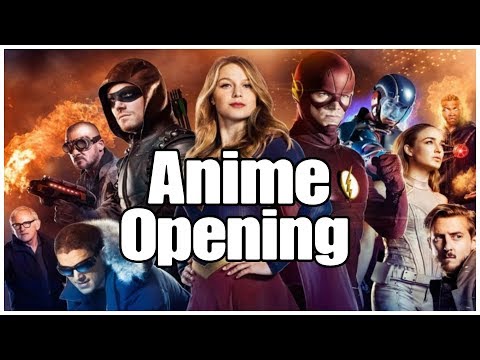 What if Crisis on Earth X had an Anime Opening?
added by NeoNightclaw19
video
the flash
cw
crossover 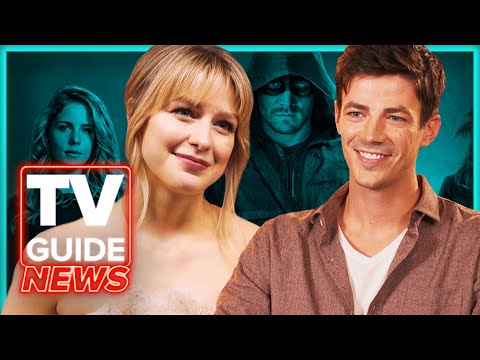 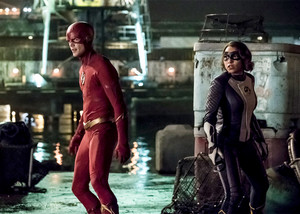 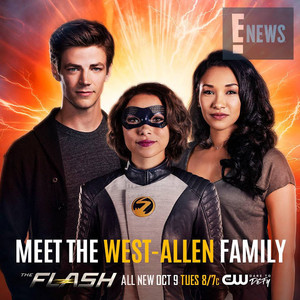 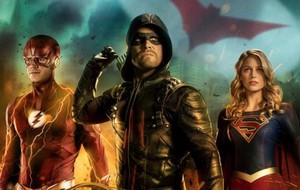 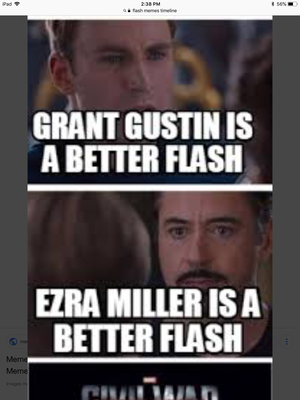 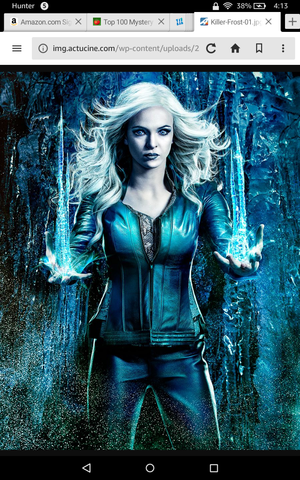 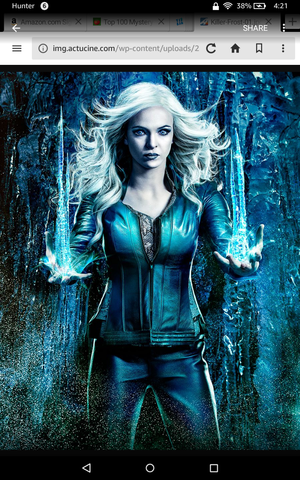 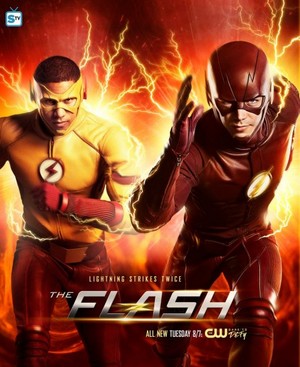 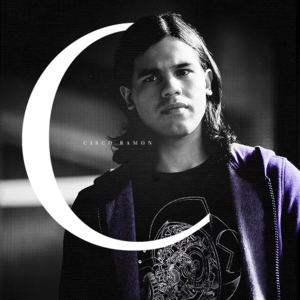 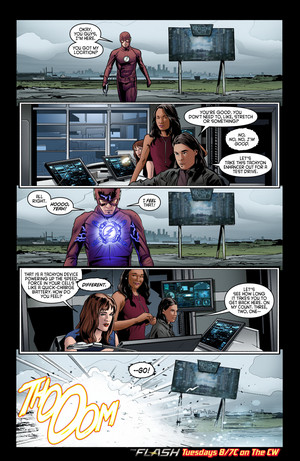 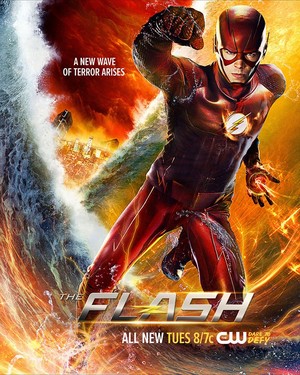