3
Rough Transcript of the Hobbit G+ Hangout! (SPOILERS!)
posted by 3xZ
Here's a rough transcript of the Hangout that Peter Jackson (PJ), Richard Armitage (RA), and Evangeline Lilly (EL) were in a few minutes ago. The quotes are not exact quotes, but rather, summaries. There is also a transcript of the new clip that was shown, the beginning of the barrel rider scene.

Q: Any pranks on set?
PJ: Ian McKellen loves napping, so I once sneaked up on him while he was napping between takes and yelled "And...Action!" causing Ian to jump up in surprise and straighten up as if he had to act.
EL: There wasn't really much time to do pranking; the best pranks take place on camera, but we can't do those much because then we'd be wasting the extremely valuable camera time
RA: When Martin brought his son and daughter to visit the set, I lent Martin's daughter some of my prosthetic hands, and she waved to Martin with them on.

Q (to PJ): On a scale from 1 to 10, how epic will the Battle of Five Armies be?
PJ: I'd like to say 15 or 25, but then I'd be like a marketer or salesman. If you have three or more clips without any of the principle characters, the audience will zone out, so we had lots of shots of the main characters. There were many storylines coming together even in the middle of the battle, so it's not just a bunch of action; the battle is almost secondary to the characters.

Q (to RA): The barrel scene looked fun but dangerous; what was it like?
RA: It was filmed in multiple locations. I got caught in a current at one point, got pulled under for a bit and had to be pulled out by two stunt guys since I was wearing all the dwarf prosthetics.
PJ: We had a safety line across the river so that no one would float too far away. Without the rope, I wonder if they might have floated to Australia.

Q (to EL): What was your biggest challenge to playing an Elf?
EL: Being poised and graceful, which is completely different from my normally silly and joking nature. Having to shut up and seem elegant, graceful, and poised was difficult.

Q (to EL): Have you always wanted to play an Elf? Did it live up to your expectations?
EL: Who doesn't want to play an Elf?
PJ and RA: Not us.
EL: It lived up to my expectations. I was giddy every time I walked onto a new set. I've always been a huge LotR and PJ fan. When they first asked me what size prosthetic ears I wanted, I wanted the largest, but they gave me the smallest, which didn't work out. The whole makeup/prosthetics time for me each day was 2 hours.
RA: Mine was 3 and a half hours.
PJ: I've spent more time with Tauriel than Evangeline, so seeing you is unusual to me. I'm used to the actors in their costumes, rather than real life.
RA: I did grow my own beard.
PJ: It looked better like that.
RA: It's useful for storing stuff like little bits of food.
Host: Did you guys ever want to sleep in your costume/prosthetics to avoid all the time spent to put them on and take them off?
EL: Absolutely not; you couldn't have paid me to do that. My costume, wig, and prosthetics were nasty after all the action scenes and sweat.
PJ: I've seen both RA and EL work themselves to exhaustion.

Q (to PJ): 10 years ago, Return of the King was released; in a few days, the Hobbit: DoS comes out. How did you feel after filming the last scene of the Hobbit movies?
PJ: For many of the film people, they're done after the filming. For me, it's just a new beginning; I have to do all the post-production. So, saying goodbye to friends and people you've been working with for 18 months is hard, but you can hope to work with them in the future. You enjoy the relationship of working with these people and having mutual trust and understanding.
EL: That natural understand is very rare. Working with PJ was, sometimes, hell, but I realized that both he and I almost always had the exact same visions and goals, which was great.

Q (to RA): How do you find empathy for Thorin, given his actions in the movie?
RA: If he had to stand in court for some of the things he's done, the promises he's reneged on .... I don't think I'd always agree with Thorin. There's a scene in front of the Mountain where Balin is arguing with Thorin, telling him that Bilbo shouldn't have to come into the Mountain. Sometimes though, I do agree with Thorin.
EL: Seeing your performance, I realize that the Thorin side must have won; the way you acted, the audience would see some of the things he does as not immoral, but just hard decisions.
PJ: We had to find the balance of Thorin making the hard and controversial decisions he made in the book.
------
Host: And here's the new, exclusive, and never-before-scene clip!
Bilbo leads the dwarves to a pantry full of barrels; he orders them inside.
[Bofur:] “You were supposed to lead us out, not further in!”
[Bilbo:] “I know what I’m doing!”
[Bilbo:] “This way.”
[Bilbo:] “Into the barrels, quickly!”
[Dwalin:] “Are you mad?! They’ll find us!”
[Bilbo:] “No, no, they won’t. I promise you. Please, please, you MUST trust me!”
The dwarves look at each others, then enter the barrels. The Elf is sleeping on a table, presumably drunk. Bilbo counts to make sure all the dwarves are in barrels. Once they're all in, Bilbo starts walking away.
[Bofur:] “What do we do now?”
[Bilbo:] “Hold your breath.”
[Bofur:] “Hold my breath??”
[Dwarf:] “What do you mean?”
Bilbo pulls a lever, and the platform the barrels were on tips, causing the barrels to roll out a hole and into the stream below. As the barrels fall, the loud thumping noises wake the Elves. Bilbo looks excitedly around as the last barrel falls and the trap door closes; he then realizes that he is still stuck, alone, in the wine room.
------

Host (to PJ): Are you making tweaks to the movie all the way until the end, when it comes out?
PJ: Ha, no. On the way to the premiere, I had a bag with the hard drives holding the movie, so if anything had happened to me...you wouldn't have had a premiere.﻿
METAO, hug08 and 1 other like this

1
The Dwarfs
added by Costa

1
The Hobbit: The Battle Of The Five Armies - Teaser Trailer Screencaps
added by 3xZ
Source: 3xZ 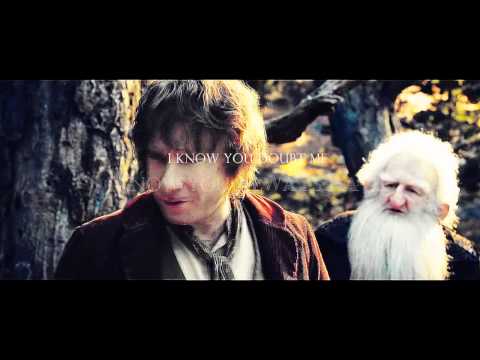 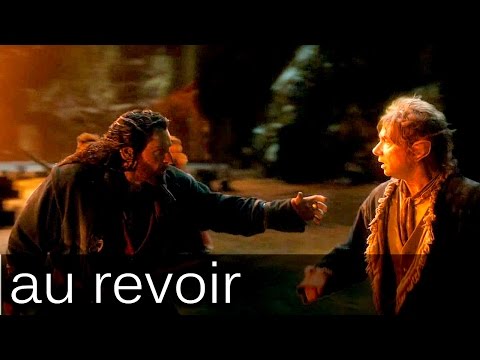 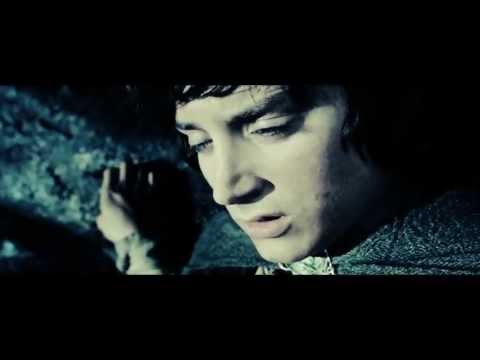 Invisible - The Hobbit & LOTR
added by BonalDea
Credit: OViolentDarkKnightO
video
the hobbit
an unexpected journey
lord of the rings
fanvid 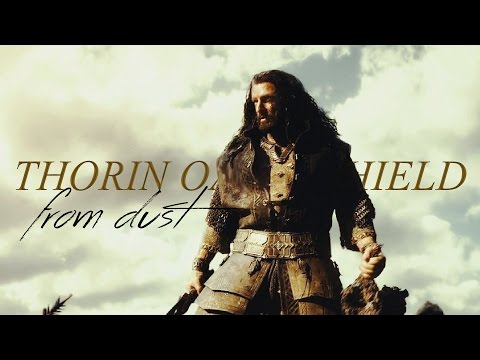 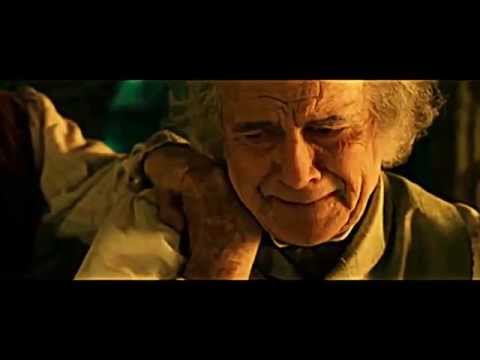 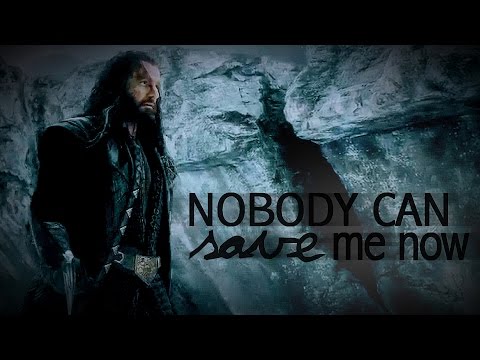 1
Thorin • Nobody can save me now
added by sherlocked88
Credit: sigyn27
video
the hobbit
thorin oakenshield
fanvid 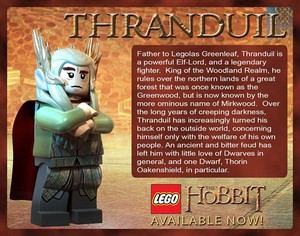 Thranduil in LEGO The Hobbit
added by cynti19
Source: Facebook 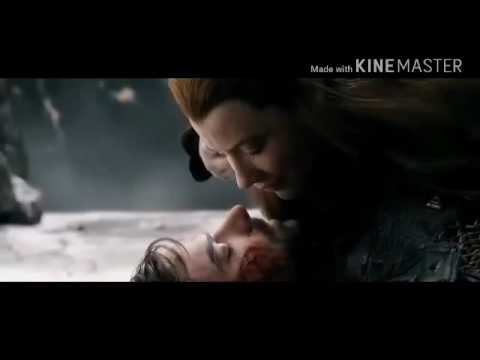 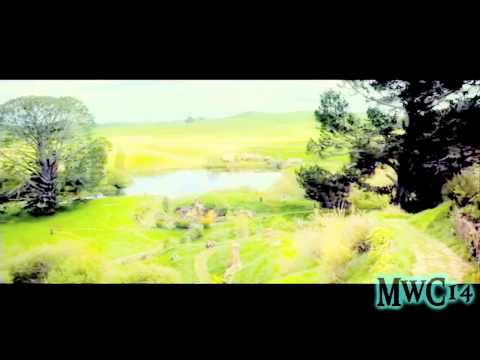