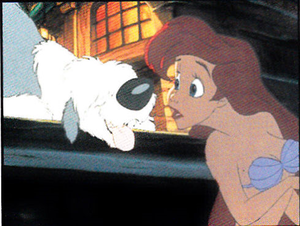 Clearly curious, he follows the smell toward the porthole Ariel is looking through, and our fave redheaded mermaid gasps and hides when she realizes that he's coming her way. The look of fright on her face as she presses her back against the side of the ship is palpable, she's never seen a creature like this before and has no idea what he'll do if he discovers her.

But Ariel's curiosity matches Max's own and after taking a breath, she can't resist peeking back through the porthole...ending up face to face, almost nose to nose, with Max. Max must have spotted Ariel even before she turned to face him, because he has a goofy grin on his face and is panting in excitement - he clearly thinks Ariel is really pretty and can tell (or should I say, smell) how good she is. For her part, Ariel just looks adorably entranced by seeing Max up close and personal, and is too fascinated to say anything.

Then Max gives Ariel a big, slobbery lick across the side of her face, partly as a greeting and partly to show her just how much he immediately likes her. He looks very pleased by this (Ariel must taste great!), but Ariel isn't used to it and has a grossed-out look on her face: eyes squeezed shut, nose crinkled, and mouth downturned in a childish frown.

However, after Eric calls Max away and Ariel peeps back through the porthole, her expression is now one of astonishment as she processes the encounter she just had. You clearly see it click in her mind that Max's lick was a friendly gesture, and she gets a wide smile of delight on her face as she rubs her cheek (the wrong cheek - oops!)

Later, when Scuttle confuses the "handsome human" Ariel is talking about for Max and says "I dunno, he looks kind of hairy and slobbery to me!", Ariel's laughter and response of "Not that one!" has a quality of fondness to it - like she is remembering just how hairy and slobbery Max was when she met him a few minutes back, and she quite likes that about him. 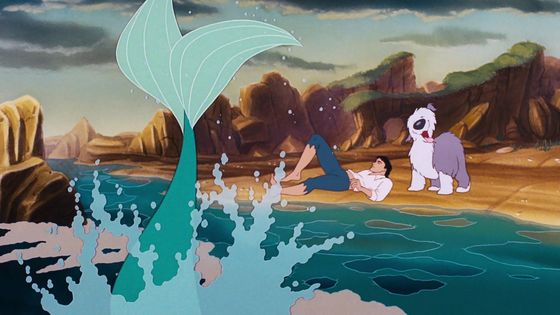 The next scene involving Ariel and Max happens pretty shortly afterward. After rescuing Eric from the shipwreck, Ariel is stroking his cheek and singing to him on shore. As Eric is beginning to regain consciousness, Ariel hears Max barking. Knowing that this means the rest of Eric's crew will be close behind, Ariel takes her hand off of Eric's cheek and heads back toward the ocean.

Max is overjoyed to see his master alive and licks his cheek to show it - the very cheek Ariel had been placing her hand on. The immediate reaction on Max's face (wide eyes and an excited grin) shows that he recognizes the taste of Ariel, which makes him look toward the ocean and see her disappear beneath the waves. Not wanting her to go as he wants to thank her for saving his best friend, Max bounds into the water after her.

He is sadly unable to find her before Grimsby calls him back to shore, although judging from his excited panting he can still smell her. But then Ariel belts out her final reprise of "Part of Your World" from the distant rock she's on, and Max's canine hearing is strong enough to hear it, making him turn around and bark some more - clearly his way of applauding and encouragement for Ariel to follow her dreams, since Max knows how perfect Ariel would be for his master - not to mention he really wants to see her again himself! 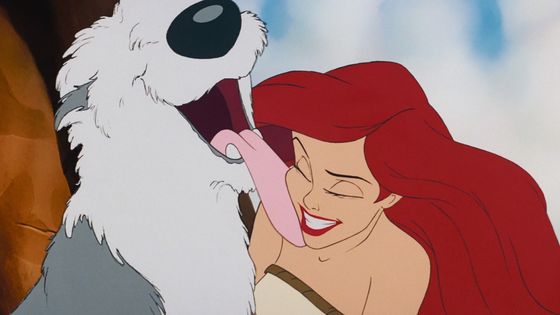 Later in the movie, Max is walking with Eric on the beach when he smells Ariel's scent on the breeze, which drives him berserk with excitement as he runs off to where Ariel is, barking encouragement for Eric to follow.

When the now-human Ariel sees Max barking at her and bounding toward her, she either doesn't recognize him in the moment or is worried that he doesn't recognize her with her new legs, and so she tries to run away. This just seems to make Max more excited, as he chases after her around a large rock until she climbs up it to avoid him...which doesn't work since he's able to use his large paws to climb it too!

Max jumps up and gives Ariel another big, slobbery lick on the cheek. This immediately makes Ariel grin one of her widest grins, as it makes her either recognize Max or assure her that he recognizes her - either way, she is glad to see him again, and looks at him with the utmost fondness as she holds her wet cheek.

During the following meeting between Ariel and Eric, Max can barely contain his excitement at his master finally finding his soulmate, constantly jumping, barking and panting around the two of them. But when Ariel is unable to speak and Eric decides that she couldn't be the girl who saved and sang to him, Max blows the hair over his eyes in frustration at his master's obliviousness - an action Ariel immediately copies before giving a sideway glance at Max as if to say "I know, I feel the same way!" Neither of these characters can speak, and are incapable of direct communication, and yet they are completely in sync with one another all the same.

Now living at Eric's castle, Ariel watches Eric play with Max in the yard from her bedroom's outside balcony, giggling at how cute they're being. Both master and pet soon notice her doing so - Eric smiles and gives her a wave of his hand while Max grins and pants as he looks at her. Ariel is surprised at being caught like this and gives an embarrassed smile and wiggling of her fingers at them in response before retreating to her room. It's a nice little scene to show how good these three are at living together, which bodes well for the future. 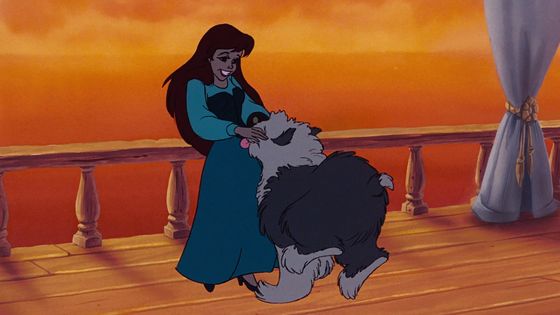 When Eric's wedding to Vanessa is interrupted and Max bites the false bride's rear end in order to rescue Scuttle, the seagull pulls the shell necklace with Ariel's voice in it free. It shatters and Ariel's voice is restored to her. As Eric is snapped out of his trance and Ariel says his name, Max runs over to her, barking and jumping up at her excitedly. Ariel gently lifts her hands in front of Max to calm him down while lovingly grinning in amusement at the sheepdog, letting him lick at her hands. For someone who was twice worried about how Max would receive her presence, it's great to see just how comfortable Ariel is with him now that she knows how much he loves her. 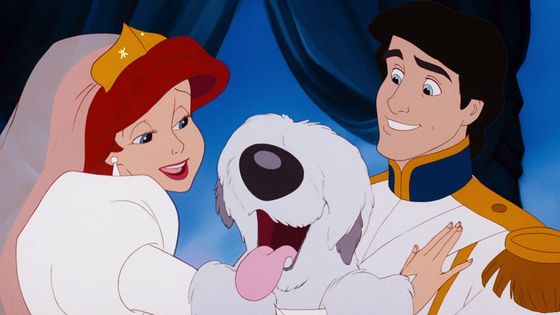 The last interaction between Max and Ariel are in the final scene, when Ariel and Eric are married. Their kiss clearly came after "You may now kiss the bride" was said, and Max must have thought it applied to him as well because he pushes himself between the two in order to joyfully lick Ariel's face. Ariel smiles about this and lovingly pets him on the head, a clear way of her saying "That's right, you're my dog too now!" So cute! 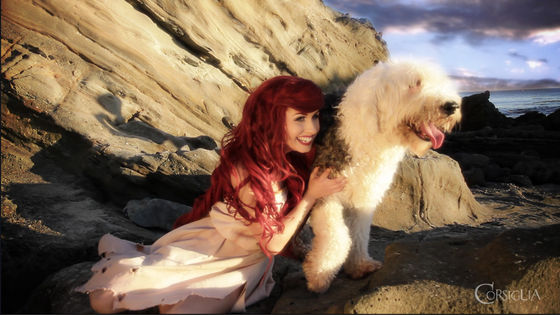 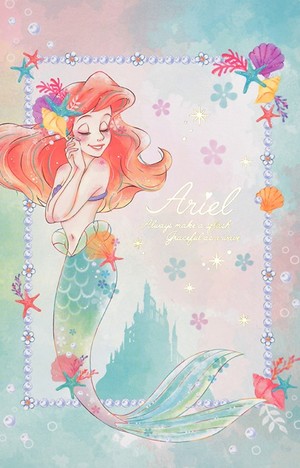 1
the Little Mermaid
added by tiffany88 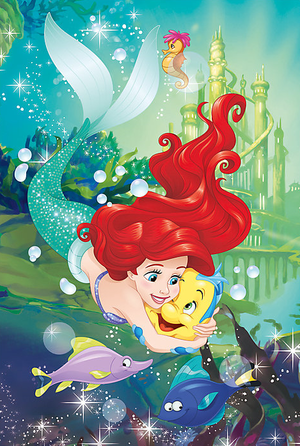 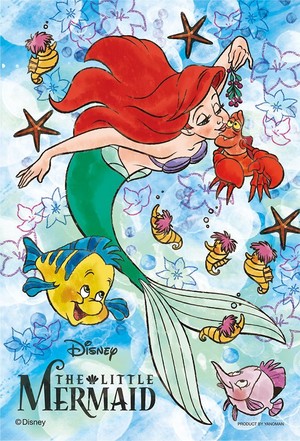 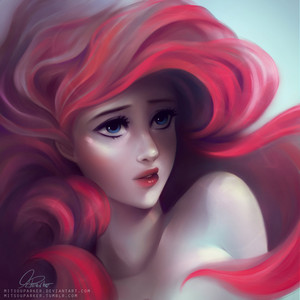 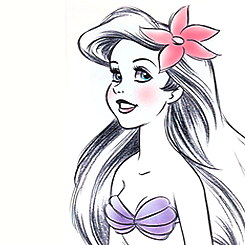 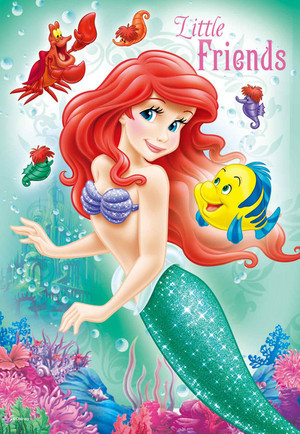 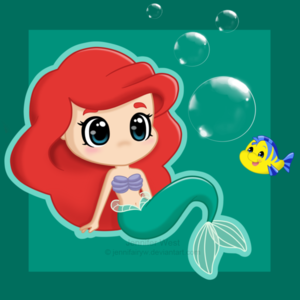 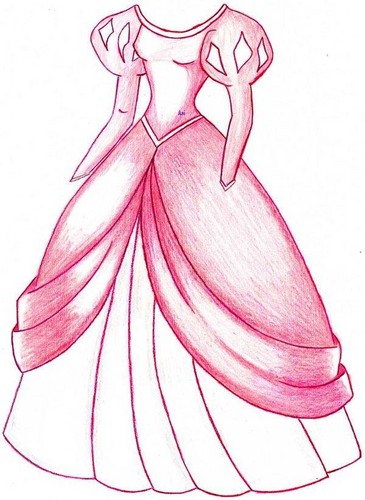 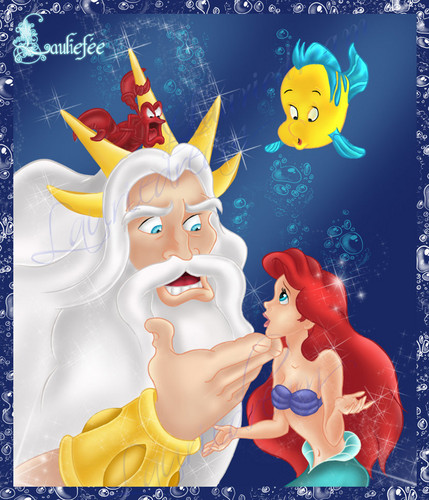