Island- 2010 film starring Colin Morgan!
posted by heartmerlin2
Hello fellow Merlin fans. As we know, Colin is starring in a new film called 'Island' (was previiosly called 'The Sea Change'). Here is some inside info you may like to know:

Background info
. It has been in development for the last four years.
. The directors are; Jane Rogers and
Elizabeth Mitchell
. It is being created by Tailormade Productions.
. It's genre in DRAMA!

Whats happening now:
The team have been hard at work on the edit of ISLAND since wrapping up on tha 29 November.

Autumn was spent prepping for ‘Mull – The Return’ which ment an almost entirely new crew decamping to the...
continue reading...
merlin twitter cast and networks
posted by angleandkatie
Hello I am a new work for the Merlin cast and my twitter name is @angelandkatie I'm just going to let you know that on twitter we have nearly all the merlin cast joining I will kindly label them below
Cast members
@bradleyjames
@realangelcoulby
@tomellis17 he played cenred
@eoincmacken
@RupertFYoung
@EmiliaFox
@Tomhopperhops
@AnthonySHead
Networks for the cast
@katiemcgrathnet
@angelcoulbynet
@colinmorgansite
@angelandkatie
@merlinoffical
@merlinfansite
@camelotcast
@MistOfCamelot
@FyLancelotxGwen
@FyMerlinxArthur
@Merlin_BBC
@Team_Merlin
If you love merlin and your on twitter your free to follow and they are the real cast and the network are fansites and net's and if your not on twitter join and follow great people to follow
1
More info on 'Parked'
posted by heartmerlin2 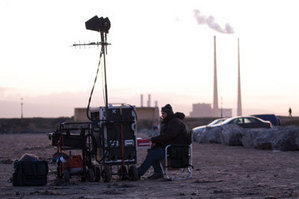 Sound mixer Dan Birch at Pigeon Hse carpark
During Ireland’s coldest January for 25 years the last sight local walkers expected to see was a film crew shooting in an exposed Dublin Bay car park. The four-week shoot for Parked kicked off with six days in the coastal car park in the centre of Dublin’s expansive, semicircular bay. The area is essentially industrial, dominated by the two tall chimneys of the electrical power station that are a distinctive landmark of the nation’s capital. Exposed to all of the elements – gale force onshore winds, rain and snow, sand and sleet – it makes for an inhospitable shooting environment,...
continue reading...
1
Parked- 2010 film- starring Colin Morgan
posted by heartmerlin2
Info about Island:

A Ripple World Production with the support of Bord Scannán na hÉireann/The Irish Film Board.

When mobile homeless man Fred Daly loses his job in London he starts his car and ends up in a seaside car park near his old family home in Dublin, a city he hasn't seen in years.