2
City Of The Heavenly Fire
posted by Annoula_S 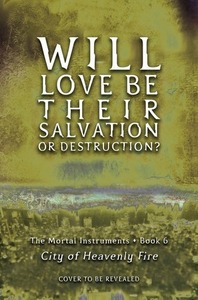 City of Heavenly Fire is the sixth, and final, novel in The Mortal Instruments series.
Synopsis
Jace, Clary and their friends are drawn inexorably into a war that puts Heaven against Hell, angels against demons – a war that threatens to destroy our world entirely if the Shadowhunters can't end it first.
I am coming.

Darkness returns to the Shadowhunter world. As their society falls apart around them, Clary, Jace, Simon and their friends must band together to fight the greatest evil the Nephilim have ever faced: Clary’s own brother. Nothing in the world can defeat him — must they journey to another world to find the chance? Lives will be lost, love sacrificed, and the whole world changed in the sixth and last installment of the Mortal Instruments series!
Teasers Edit
Teaser #1
Alec looked down at the shattered pieces in disbelief. "You broke my phone."

Jace shrugged. "Guys don’t let other guys keep calling other guys. Okay, that came out wrong. Friends don't let friends keep calling their exes and hanging up. Seriously. You have to stop."

Alec looked furious. "So you broke my brand new phone? Thanks a lot."

Jace smiled serenely and lay back on the grass. "You're welcome."

"I think," Jace said, "that you don’t want to tell your secrets, so you decided to break up with Alec because..."

"No killing," Jordan said. "We're trying to make you feel peaceful, so you don't go up in flames. Blood, killing, war, those are all non-peaceful things. Isn't there anything else you like? Rainforests? Chirping birds?"

"I'm starting to think we have a problematic issue of personal philosophy here."

Jace leaned forward, his palms flat on the ground. "I'm a warrior," he said. "I was brought up as a warrior. I didn't have toys, I had weapons. I slept with a wooden sword until I was five. My first books were medieval demonologies with illuminated pages. The first songs I learned were chants to banish demons. I know what brings me peace, and it isn't sandy beaches or chirping birds in rainforests. I want a weapon in my hand and a strategy to win."

Jordan looked at him levelly. "So you're saying that what brings you peace... is war."

"We shouldn't," protested Isabelle. "The Clave has a plan."

"The Clave has the collective intelligence of a pineapple," said Jace.

Alec blinked up at them. "Jace is right."

Isabelle turned on her brother. "What do you know? You weren't even paying attention."

"Yeah, but there's like a 90% chance of me being right most of the time, so that's not proof you were listening," said Jace. "That's just a good guess."

Magnus rolled onto his back and put his feet up on the arm of the sofa. “What do you care if Alec’s miserable?”

“What do I care?” Jace said, so loudly that Chairman Meow rolled off the couch and landed on the floor. “Of course I care about Alec; he’s my best friend, my parabatai. And he’s unhappy. And so are you, by the look of things. Takeout containers everywhere, you haven’t done anything to fix up the place, your cat looks dead—“

She turned to look at Sebastian, lying on the bed. He was shirtless, and even in the dim light the old whip weals across his back were visible. She had always been fascinated by Shadowhunters but had never thought she would find one whose personality she could stand for more than five minutes, until Sebastian.

"Simon," said a voice at his shoulder, and he turned to see Izzy, her face a pale smudge between dark hair and dark cloak, looking at him, her expression half-angry, half-sad. "I guess this is the part where we say goodbye?"

A moment later, Helen had returned; she was walking slowly now, and carefully, her hand on the back of a thin boy with a mop of wavy brown hair. He couldn’t have been older than twelve, and Clary recognized him immediately. Helen, her hand firmly clamped around the wrist of a younger boy whose hands were covered with blue wax. He must have been playing with the tapers in the huge candelabras that decorated the sides of the nave. He looked about twelve, with an impish grin and the same wavy, bitter-chocolate hair as his sister.

Jules, Helen had called him. Her little brother.

The impish grin was gone now. He looked tired and dirty and frightened. Skinny wrists stuck out of the cuffs of a white mourning jacket whose sleeves were too long for him. In his arms he was carrying a little boy, probably not more than two years old, with the same wavy brown hair that he had; it seemed to be a family trait. The rest of his family wore the same borrowed mourning clothes: following Julian was a brunette girl about ten, her hand firmly clasped in the hold of a boy the same age: the boy had a sheet of tangled black hair that nearly obscured his face. Fraternal twins, Clary guessed. After them came a girl who might have been eight or nine, her face round and very pale between brown braids.

The misery on their faces cut at Clary’s heart. She thought of her power with runes, wishing that she could create one that would soften the blow of loss. Mourning runes existed, but only to honor the dead, in the same way that love runes existed, like wedding rings, to symbolize the bond of love. You couldn’t make someone love you with a rune, and you couldn’t assuage grief with it, either. So much magic, Clary thought, and nothing to mend a broken heart.

Julian swallowed and handed the little boy he was holding over to his sister. He stepped forward, his eyes darting around the room. He was clearly scouring the crowd for someone. His shoulders had just begun to slump when another figure darted out onto the stage. A girl, also about twelve, with a tangle of blond hair that hung down around her shoulders: she wore jeans and a t-shirt that didn’t quite fit, and her head was down, as if she couldn’t bear so many people looking at her. It was clear that she didn’t want to be there — on the stage or perhaps even in Idris — but the moment he saw her, Julian seemed to relax. The terrified look vanished from his expression as she moved to stand next to him, her face ducked down and away from the crowd.

“Julian,” said Jia, in the same gentle voice, “would you do something for us? Would you take up the Mortal Sword?”

His eyes shone when he looked at her, green as spring grass.

He has always had green eyes, said the voice in her head. People often marvel at how much alike you are, he and your mother and yourself. His name is Jonathan and he is your brother; he has always protected you.

“Okayyyyy,” Isabelle said in a low voice, “When did Brother Zachariah get hot?”

Black for hunting through the night

For death and mourning the color's white

Gold for a bride in her wedding gown

And red to call the enchantment down

White silk when our bodies burn

Blue banners when the lost return

Flame for the birth of a Nephilim

And to wash away our sins.

Gray for the knowledge best untold

Bone for those who don't grow old

Green to mend our broken hearts

Silver for the demon towers

And bronze to summon wicked powers

They landed at Simon's feet. "Take your clothes and go!" Isabelle shouted.

He kissed each finger, and with each one of them spoken a word. Five kisses, five words. His last.

Robert reached into his jacket and drew out a crucifix. Clary stared in shock as he held it up between himself and Simon. "I speak to the Night’s Children Council representative, or to the head of the New York clan," he said. "Not to any vampire who comes to knock at my door—"

Simon reached out and plucked the cross out of Robert's hand. "Wrong religion," he said. 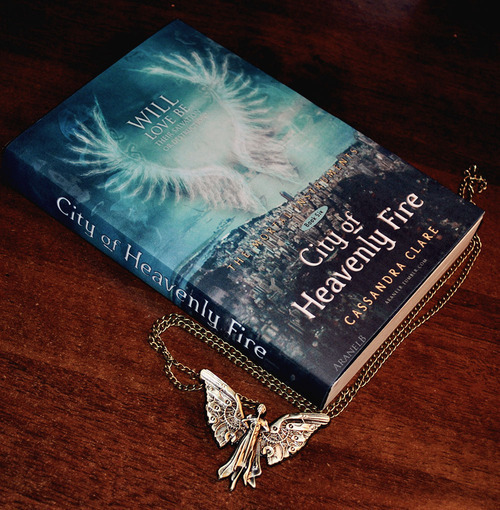 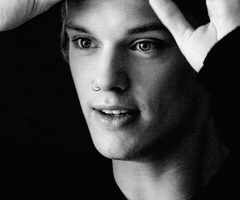 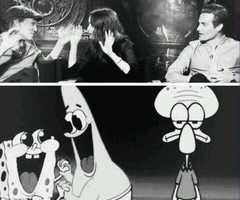 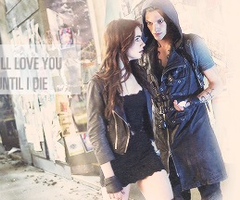 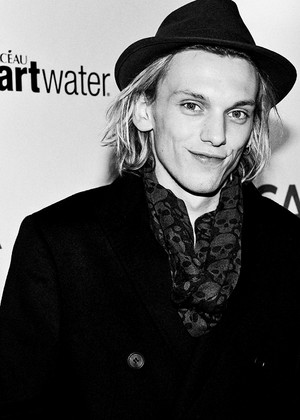 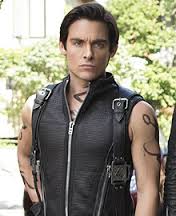 2
Jace and Clary
added by sherlocked88 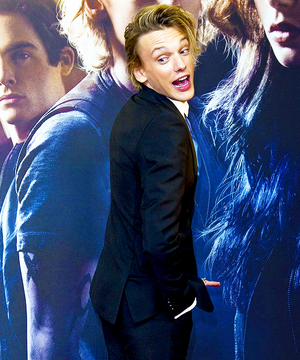 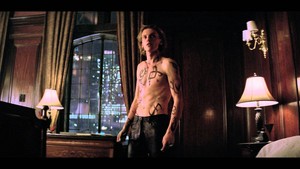 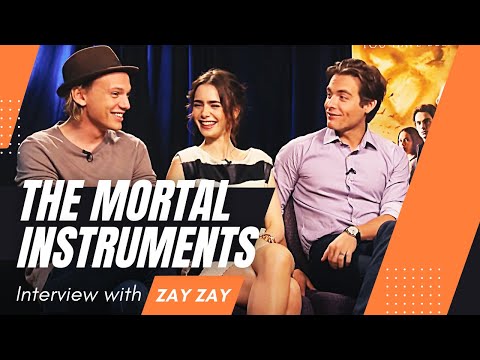 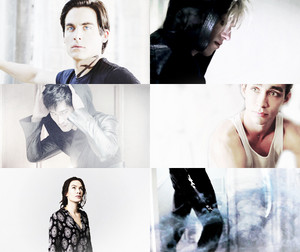 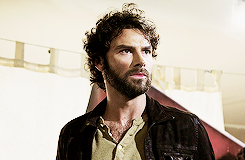 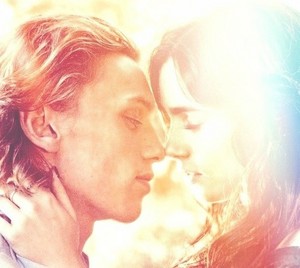