The Langford Double
posted by Starwarschick18
Cutter looked at Borden and said irritated "I saw you slip the knot again."

Julia piped up self-deprecating "It's not all his fault, I think I turned my wrist."

He ignored her and shouted chiding "Some nights you just don't understand do ya? I mean if that knot slips and Julia's on the hoist she could break a leg!"

Borden said determinedly "The knot's all wrong, I know that the Langford Double will hold up better-"

Cutter cried dismissively "The Langford Double is too much a of a risk, it isn't a wet knot if the ropes were to swell up she won't be able to slip it!"

Borden replied encouragingly "She can do it, I know if we were to just practice-"

Borden shot back sarcastically "Oh you know which knots are best for our act, huh do ya wanna take over the whole bloody show."

Borden glared at Angier annoyed Cutter paid him his share.

Before he left he turned to Julia and said apologetically "Sorry I jumped up the knot, I hope you're okay?"

Julia smiled and replied assuredly "Don't worry yourself Mr. Borden, I'm fine you did very well, good night see you at the next show."

With that Borden turned on his heel and exited stage left.

Cutter replied wily "Where are you from? He shuffles props for Virgil at the Hall."

Angier asked curiously "He works for another magician, that's a bit dangerous isn't it? Aren't you afraid he'll steal you're tricks?"

Angier asked confused "How do you know?"

Cutter replied knowingly "Because I hired him to find out how Virgil does the orange trick."

Angier said warily "I don't trust him at all."

Cutter quipped sarcastically "He's a natural magician of course you can't trust him!"

Julia smiled she slid Angier's tie around his neck and began to tie it.

She said warmly " Well, I think he's all right, he's polite and professional, that's more than I can say for half of the workers around here."

Aniger grinned and replied smartly "You think everyone is 'all right', my love."

Julia smiled and shot back cleverly "Oh yes even you, dear!"

Cutter stopped on the stage steps.

He then turned and said angrily "Dammit Angier you watch you're sight lines if I can see you kissin' you're wife's leg every night so can the blokes in rows three and four!"

With that said Cutter stomped hurriedly up the steps.

Julia smiled and said strategically "My love, I know I can slip a Langford, if Borden and I were to just set aside some time to perfect it-"

Angier gently but firmly placed his right forefinger to her lips effectively cutting her off he kissed her deep and soft.

He then wrapped his arms around her waist and brought her close, sliding her onto his lap.

Angier sighed and explained worried "Julia, you could drown I won't risk you're life, not for a trick."

She kissed him once softly and replied reasonably "Robert, there is a chance I could die every time we perform the act, how is tying a different knot going to marginalize my risk?"

Angier wrapped his arms around her neck and held her close.

She leaned her forehead onto his and asked tacitly "Are you really that concerned with my safety, or is it me potentially working with Alfred Borden is what is truly upsetting you?"

He said firmly "Honestly? both, we will find success in time I promise, now this is the last time I want to hear of this okay?"

Julia nodded kissed him softly once on the lips and replied agreeably "Yes, all right."

Angier slipped his right hand into her own kissed it once gently and said satisfied "Good, come on then let's head home."

Julia watched transfixed as Angier tried to duplicate the trick he had seen at the Chinese theater.

He had one of their bed sheets draped over him and a large fish bowel between his legs.

Angier huffed exhaustively "I can hardly lift this thing when it is empty."

With a tired flourish he pulled the bed sheet off, gently dropping the bowel onto their end table that was positioned at the end of the bed.

He said impressed "The man must have the strength of a ox."

She mused thoughtfully "How fascinating, he's been pretending to be a cripple for years, what a clever and dedicated man!"

Angier replied agreeably "Any time he's in public any time he goes out it's unthinkable, Borden saw it immediately , but I couldn't fathom living my whole life pretending to be some one I'm not."

Julia grinned and said warmly "You are pretending to be someone you're not."

Angier slid on the edge of the bed, smiled softly and quipped keenly "Well I'm not sure that changing my name is a valid contrast."

He kissed her warmly.

She smiled and replied knowingly "It's not just you're name, it's who you are and where you're from."

Angier grinned and said practically " I only did that because I promised my family I wouldn't humiliate them with my theatrical aspirations."

Julia smiled she sat forward in bed and said happily "Oh, Robert, I've thought up a name for you; The Great Danton, don't you like it?"

Angier made a disapproving face.

She replied crestfallen "I thought it was rather sophisticated."

Angier quipped wryly "It's French, dearest, I can't have a French stage name, it's rather old-fashioned."

Julia wrapped her arms around his neck and kissed him softly.

She sank back onto the bed and Angier gently straddled her, she smiled and continued to kiss him.

Julia said teasingly "Despite your utter rejection of my idea, I still love you, very much."

Angier grinned and replied passionately "And I love you, my dear."

They quickly shed their night clothes, and made love well into the night.

Just before sunrise Julia quickly and quietly slipped on a suitable outfit.

She then hastily exited their house and made for the small apartment complex a few blocks down from the theater.

It was extraordinarily rundown and used mainly to house the workers of the theater and surrounding shops.

This is where Alfred Borden lived.

Julia took a deep breath and knocked on the door.

Seconds later it was answered, Borden appeared in his work clothes a slightly wrinkled blue cotton shirt sleeves rolled up to his elbows, and brown cotton pants, his hair was combed.

Julia was utterly astounded it was as if he was expecting her.

She took a deep breath and asked politely "Mr. Borden I do apologize for the early hour but I was hoping we could talk about-"

Borden held up his right hand and replied courteously "This is about the Langford Double isn't?"

She said startled "How did you know I was going to ask that?"

Borden smiled slightly and replied knowingly "Saw the fire in your eyes when Cutter and your husband said it was too dangerous."

Julia nodded and said determinedly "I was hoping that you and I could practice it before the next show."

Borden took a length of rope out of his right pants pocket.

Behind him there was a table with a pale blue silk scarf draped on it, he went over to it.

With a flourish he lifted the scarf up, underneath, sat a large tank filled with water.

He grinned and quipped eagerly "Right then let's get started."

The theater's next scheduled performance was to take place the following Friday.

So for the next week she routinely would sneak out well before sunrise go to Borden's room and they would practice her slipping the difficult knot.

Julia was very impressed by Borden's professionalism. Behind the cool and aloof exterior he showed the outside world in their practices he was kind and attentive to her and never once made un-wanted advances.

If not married she might of taken to being his mistress.

Julia knew what she was doing was risky and dangerous the fact that she was keeping her early morning practices a secret from Robert didn't make her feel any better.

Yet despite the risk she knew this was something she had to do not only to prove to herself she could do it but she wanted to prove it to the world and to her husband.

Friday finally came and Julia was nearly bursting with anticipation.

After a whole week of practice she was absolutely certain she could un-due a Langford Double.

Twenty minutes before they were to go on stage there was a knock on her dressing room door.

Julia opened it, and was un-surprised to discover Borden standing in the door way.

He asked confirmedly "Julia are you certain you want me to tie a Langford?"

She said reassuringly "Yes, trust me Alfred I can slip it, don't worry everything will be fine."

Alfred nodded curtly and replied softly "All right I just wanted to make sure."

Julia smiled and said confidently "Wait for my signal all right?"

Borden nodded and replied astutely "I will."

She went back into her dressing room and began to put her butterfly barrettes into her hair.

As soon as she finished there was another knock on her door.

However she was flabbergasted when she found Angier grinning on the other side of the door.

Angier said warmly "I just wanted you to know that, I love you."

He slid his arms around her waist and gently kissed her on her forehead.

Julia's heart felt heavy with guilt, more than ever she wanted to tell her husband of her plan.

But she knew that her husband's ignorance of her actions that night were for the best.

Harshly swallowing her guilt and fear, Julia smiled and leaned into his embrace, he in turn held her tighter.

Julia said as passionately as she could muster, "Thank you Robert, I love you as well, very much."

She desperately didn't want to let Robert go but the show was to start in just a few minutes.

Gently she disentangled herself from her husbands arms.

Julia said hurriedly "All right now dearest you need to go take you're place, after all a plant is no good if you aren't there when I call on you."

She then began to push him out of the room.

Laughing Angier turned around in the door way and kissed her softly on the lips.

He said ruefully, "Okay I'm going, break a leg out there tonight, I love you."

Julia gave him a tender kiss on the forehead and replied endearingly "You too, I, love you, see you soon."

On stage as Borden started to bind her wrists Julia locked eyes with him and nodded twice.

He gave her a slight nod and quickly began tying.

Julia was soon hoisted into the air and could hardly contain her excitement.

I can do this I'll tell Robert when the show is over, I know he'll be upset but after tonight he won't be able to deny that I am just as good as him. 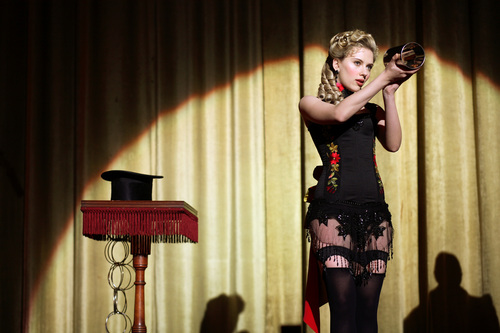 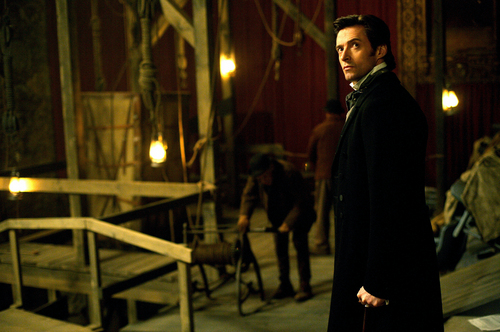 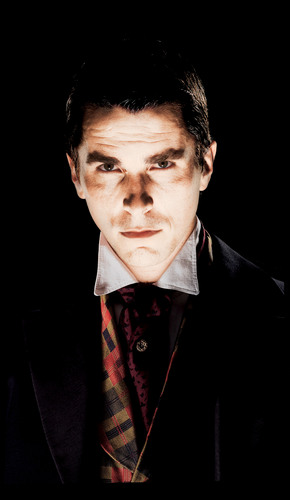 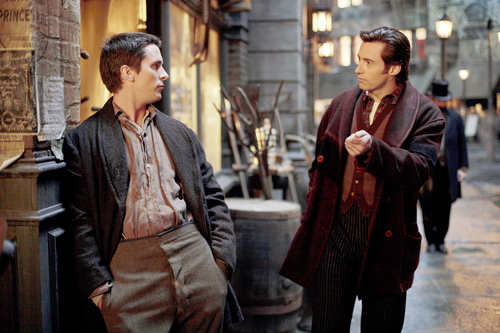 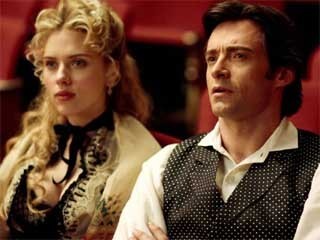 3
The Prestige
added by curlsANDjeans 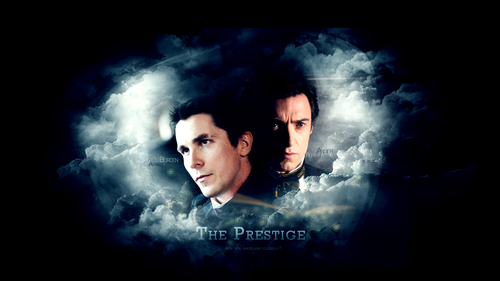 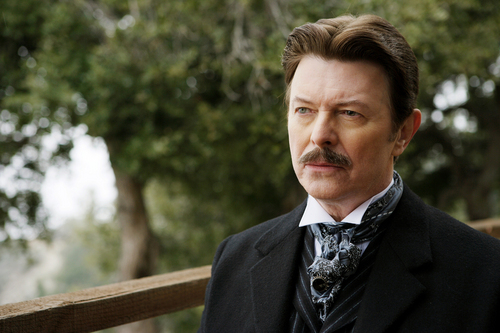 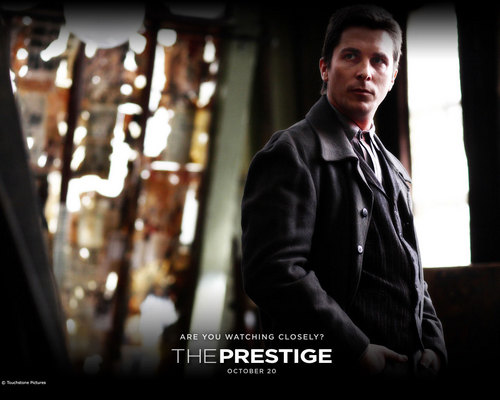 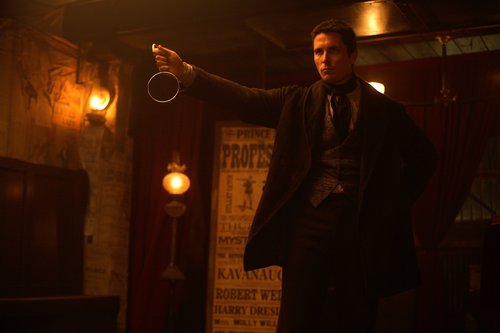 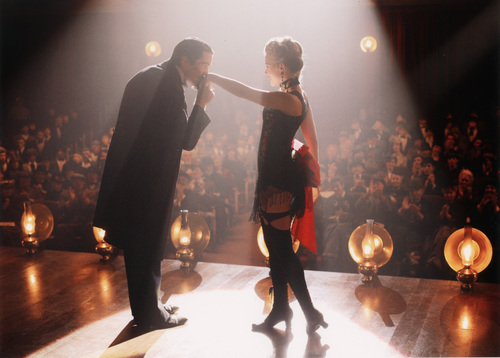 The Professor & Olivia
added by Fan-M 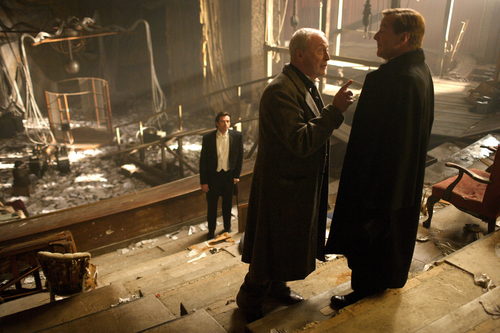 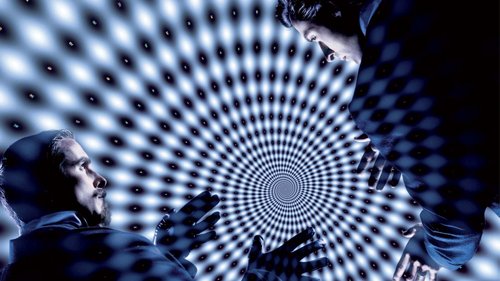 1
The Prestige
added by Fan-M 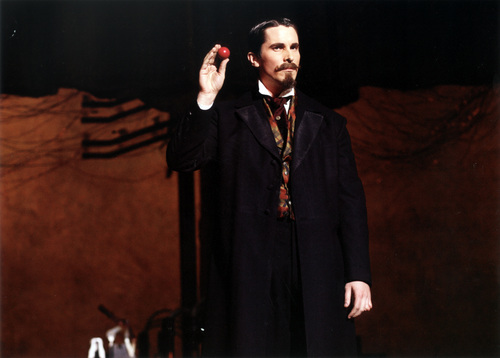 The Professor
added by Fan-M 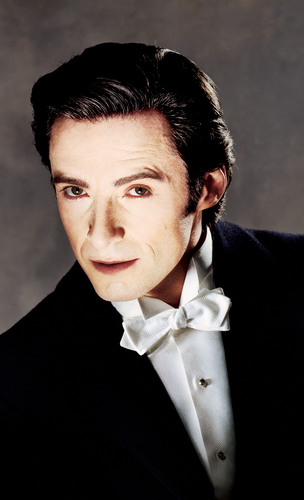 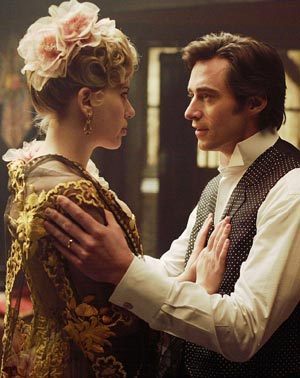 2
The Prestige
added by curlsANDjeans 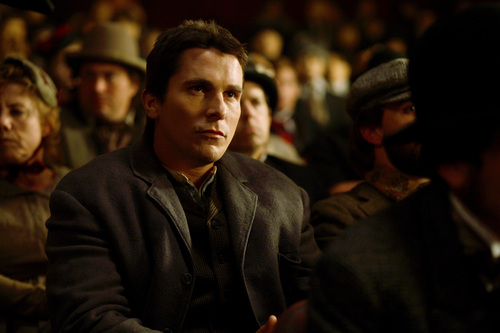 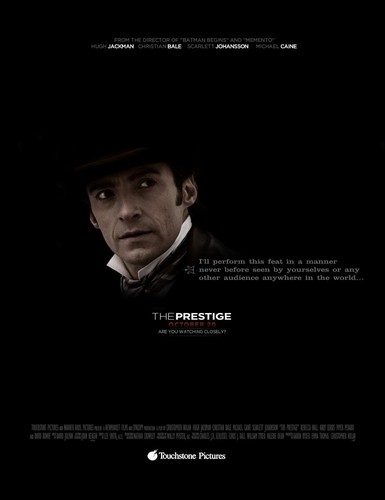 1
The Prestige Poster
added by Fan-M

3
The Prestige
added by curlsANDjeans 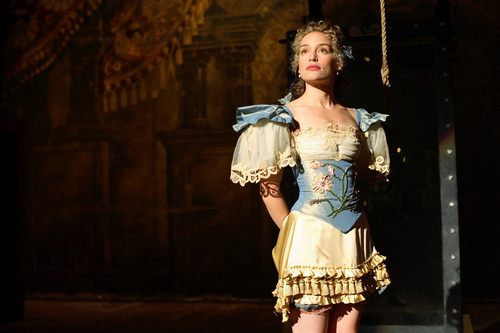