The war between Horus and his enemy Seth had lasted a long time. Isis decided to help her son Horus. She met Seth, and asked for his help. She described someone killing a man and taking all he had away from the man's son. Seth said that killer should pay for his crimes. Isis said that Seth himself was the killer, and he had condemned himself. The other gods agreed, and Seth was driven out into the Sahara Desert.
1
What Do You Think????
posted by fabfamily99
What do you think will happen in the next book. Of course it is going to have a problem, solution, and drama. The book will obviously mainly deal around Carter and Sadie trying to defeat a tradgedy, auch as a monster. What monster, what tradedy? Will they find Zia, and who will get hurt? Zia? Anibus???? Will Bast come back and reliove again since she has 7 lives? I think that the 2nd book will deal around that snake monster that controlled Set, if it comes, out, as it said in the book that it the snake thing was espcaping slowly. Or will Bast defend the world as she continues to battle the snake thing in that punishment area thingy? Or will she come out and release the smake thing so Carter and Sadie will be able to help her defeat it? So many questions, soon to be answered in less than a year..... 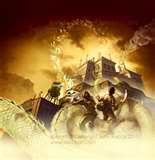 First off, I give it an A++. I read the book in less than a week, with a totalling of 528 pages. The book transitions from 2 point of views, which makes the book utterly facsinating and truly amazing. It goes into deep secription, with a bit of humor. This novel is action-packed, and once you put your hands on it, you'll never want to let go. If your house was burning, what would you bring? Well, of course I would bring all my valuables, and that includes this book. This book is amazing and I can't put it into words of how much I love it. That's why, this would be the book I would save if my house was on flames. Second place, of course, The Percy Jackson seires. (The Last Olypian is tied!) Now read the Red Pyramid and than answer this question, Which book would you save from your house if it was up in flames???
More Cards
1234567891011