1
About Butch!
posted by boomerlover 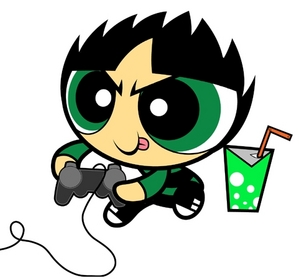 Role: Butch is the toughest of the Rowdyruff Boys.

Personality: Butch's personality puts the "rowdy" in Rowdyruff. His personality is like that of a typical little boy. Like Buttercup, he likes to play rough and fight. He also is mostly the bully of the group. Because of that, Butch is the source of the arguments he has with his brothers. But don't let the spikes and nails fool you! Butch actually has more of a soft side more than Buttercup does. Like Brick, he prefers to bottle it rather than show it most of the time. Butch is also a very jealous boy.

Intelligence: Butch is the least intelligent of the group but that doesn't mean that he's not smart! Butch is a C/D student. He prefers not to use his brain but rather cheat or get others to do his work for him.

Problem Solving: Like his counterpart, Butch acts without thinking. He does have plans of his own, but because of his low intelligence, Brick never pays attention to them.

Morality: Butch is obnoxious and self centered. He's the one that's always getting yelled at (mostly by Brick). However, Butch is reasonable half the time.

Butch has a rowdy personality. He tends to come off as rough around the edges.While he is the source of most fights between his brothers, Butch will shift the blame rather than take responsibility for his actions. The fights that he and Brick have are worse than the fights that he and Boomer have. Butch often has childlike arguments (Does not! Does to!) with Boomer as opposed to a full-fledged physical, violent argument that he has with Brick (which Brick ends up winning every time. I wonder what the secret is...
kfifdidj likes this
lilbuttercup OOOOOOOOOOHHHHHHHHHHHH KKKKKKKKKKKKKKk well thats a first!!!!!
boomerlover Yep. Just about Butch.
balto cool
Blitzy_Utonium About my dadday!
Funny8Bunny55 Blitzy? Do you know about your younger sister Blast?
Bell0PPGZ If Buttercup won't take Butch........ I whant him.
Bubbles and Boomer 3
posted by seacat243 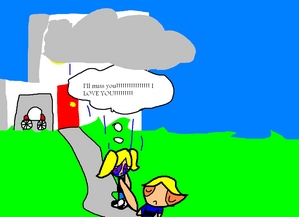 Bubbles really sad Boomer is gone
*tear hits Boomer on the forehead**Boomer starts to wake up*
Boomer: Huh? What?
*Bubbles opens her eyes*
Bubbles: BOOMER! YOU'RE ALIVE!!!!
*Boomer Sits up*
Boomer: What are you talking about?
Bubbles: I'll tell you when we get inside.
*Both walk inside*
Bubbles: I need to talk to somebody. You can go upstairs and wait for me. Okay?
Boomer: K.
*Boomer goes upstairs and waits for Bubbles in her room*
Bubbles: Okay. Who's idea was it to spy on me?
Buttercup: It was her!
*points at Blossom*
*says angrliy and sarcasticly*
Blossom: Thanks for letting me off the hook.
Buttercup: Oh don't mention it!
*Buttercup leaves...
continue reading...
Im having So much fun i can kiss you! Breaker x Reader
posted by Boomerxbubbles
Well another normal day for the rowdyrights...Bash is on the couch reading,Blake is punching his meat,and Breaker coloring a flower.You went to pay Breaker a visit since nobody ever did.Knock!Knock!Knock! "Hi(__)! Do you need something?" asked the raven haired boy."uhh..no actualy.. but do you want to go to the park?" "Sure i`d love too!" exclaimed breaker as he embraced you into a bear hug."BYE BASH!!!BYE BLAKE!!!" as soon as he closed the door,he grabbed you hand causing you to blush."W-What are you d-doing Breaker?!?" "well since you cant fly(___), i have to fly you there!" "Wuhhh?!-GAHHHHH!!!"...
continue reading... 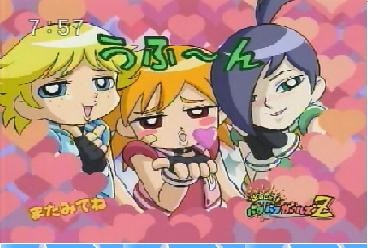 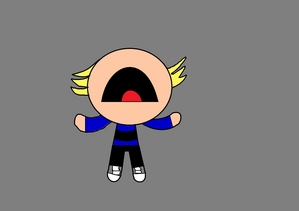 Boomer: I HAVE A GIRLFRIEND!
1 month later...
SB: I AM FINISHED!!!!! :D
Boomer: YAAAAAAAAAAAAAYYYYY!!!! :D
SB: let's go.
outside....
Boomer: we need help.
SB: let's ask those boys in that club over there.
Inside...
Boys: -are making goo goo eyes at them-
SB: excuse us but have you any bug-eyed blond boys lately? that look like him? -points at Boomer-
Random Boy: haven't seen them cutie.
SB: wtf?
Boomer: did he just call us-
Random Boy: you two free tonight?
SB: seriously, you okay?
Boomer: i'm scared.
SB: wait a minute this... THIS IS A CLUB FOR LESBIAN BOYS!!!
Boomer: O_O
SB: heh heh. RUN BITCH RUN!!!
SB and Boomer: -run out of there-
Boys:...
continue reading...
1
What their kids names are and what they look like!!
posted by boomerlover

Yup, dat bee dem!
Okay everyone, these are their kids! I got this from cartoonetwork.com 3 years ago, and I had it saved on my computer, so these are NOT made up. All the other ones like Kitten and all that crap, not real. No offense Kitten and the others. But cartoonetwork posted this stuff,So this is an article about what it said. I painted the picture though.

Okay, Blossom and Brick's kids are simple to explain: Blake is first. Blake: He is a hyper loud-mouth, who likes to play LOTS of video games, and be really rowdy, like his dad. His signiture color is orange. His favorite cousin is Billy, who I will explain...
continue reading... 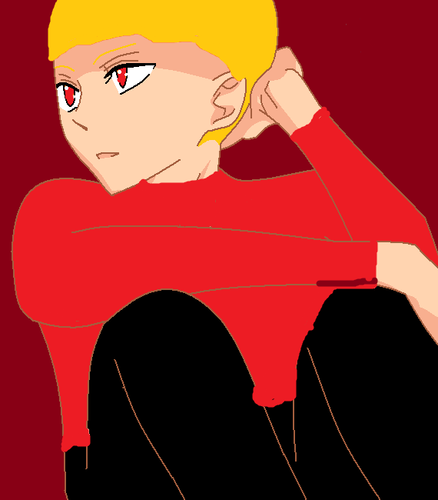 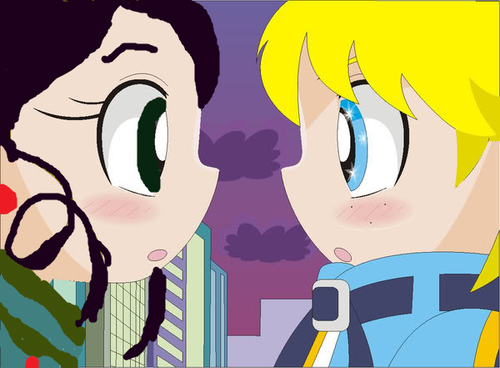 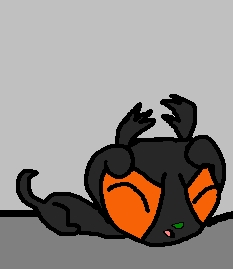 BUBBLES: YOU GUYS ARE GIVING UP?!! WIMPS!! NO MATTER WHAT IT TAKES, I'LL SAVE EM'! Getting hit by a car, pound people, e- even DYING! I WILL SAVE HIM!

(Scene changes to the boys in a cage. Butch is getting pissed. The dog in the cage next to them speeks.)

DOG: You dogs look weird! Dogs, you new? Pupps, I remember when I was. You dogs like being dogs? I don't I would love to be a clouded lepord, or something.... You like being a dog?

BUTCH*really upset*: SOMEBODY GET ME THROUGH...
continue reading...
Bubbles and Boomer 2
posted by seacat243 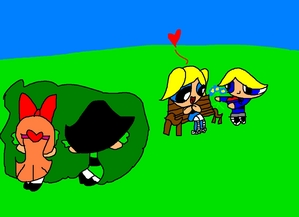 Bubbles Boomer Blossom and Buttercup at the park
Narrator: Last time...
Bubbles: *crying*
*Blossom flies in*
Boomer: BUBBLES! *Whispers to himself* THANK YOU!
Blossom: Just as I thought!!!
Narrtor: If you want to find out the rest you're going to have to press something that says "Bubbles and Boomer 1" Let's go on to see what happens.
Bubbles: Thanks Boomer!
Boomer: Your welcome. Shall we?
Bubbles: Yes.
*Those two go rollar skating*
Buttercup: What do we do?
Blossom: There's only one thing we can do! C'mon!
*Buttercup goes with Blossom*
Narrator: Later.
Bubbles: That was fun! Let's go again sometime.
Boomer: yeah how about Saturday?
Bubbles: Okay!
Boomer:...
continue reading... 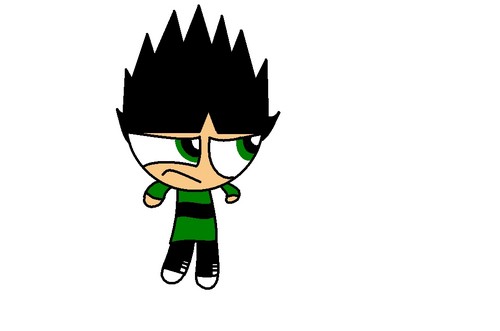 (LEST START WITH THE REDS)
bloss:mom im going out tonight
bloss mom:with who
blossy:just a friend from school
bloss sis: blossy a boy or girl
bloss: no of you busnnies
sis:a boy
bloss:no and gotta go
blossy: hi bricky
brick:hey lest go
bloss:kk
(they head to the park)
brick:soo bloss would you like to be my gf
blossy: sure bricky
(about to kiss until)
princess:oh bricky-poo
reds:huh
princess: bricky why are you doing with this slut.
bloss:im not a slut im his gf
princess:oh really then prove it

(blossoms kissed brick)
princess:noo it dosent matter all go to my next crush bommie
reds:have...
continue reading...
1
bubbles and boomers kids names
posted by bubbles223
So thar was bubbles in bed her belly line showing like bad and boomer couldnt do enything about it and she wanted to call her sisters and his brothers and a dokter so to see wat the baby was but unfortunately there were 2 baby's bubbles was shaked boomer was suprised that 2 baby's were on there way in nine week's and in her kunditun she couldn't walk at all she had to be toted to and from her room and she gave berth to a baby girl and baby boy.and she tuke home both of Thom and named Thom Brooke and Brandon.and boomer was crying so hard his bros wint to say hi to the new borns and Thay look like bubbles but aket.like. Boomer and bubbles and Thay always talk to there mom and fout there dad and Thay loved everyone in there famoly and love. Ther kind mom and strong dad untill moma had one more baby girl her name was Bella and the name was as cut as bubbles and she aket and look like her and now she is 16 and I mean to day and this.story is real
3
Interview with Butch
posted by boomerlover

Butch: Fun. I can kick butt, but I think titles are stupid. Like, who made Brick the "smart one"? I'm smart! I get a C in school. I just prefer to play video games instead of doing my homework and I am not some bookworm or some geek that studies like 100 hours a day. I always say Brick studies too much. And who made Boomer the "cute one"? I'm cute! Look at this hair sticking out of my head! Look at these facial expressions! I just don't have some stupid cutesy voice nor do I pick flowers and watch soap operas and whatever sissy stuff Boomer...
continue reading...
2
Bell as a Kitty!
posted by Butterscotch000
This is Bell as a kitty! Hope you like it. Plz comment! Blazey,Butterscotch,Billy,Blake and Bryce coming soon! I will make cats and dogs for you guys. Name the hair color,eye color,body color and what type of tail you want.


i will make more soon. my next one is butterscotch! 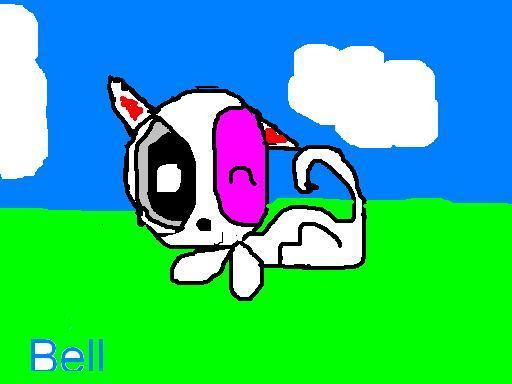 Bell as a kitty! 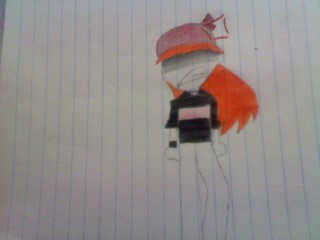 Rrtb
added by Boomerxbubbles
Source: Breaker needs credit for jkstetchy but the one I drew wuz mad blake 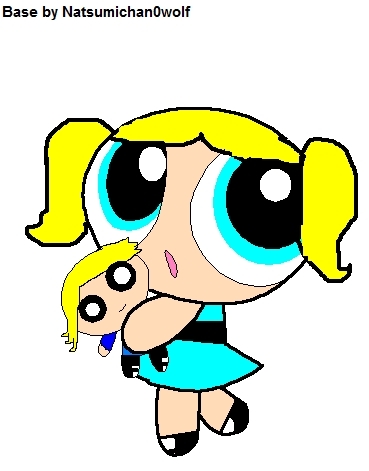 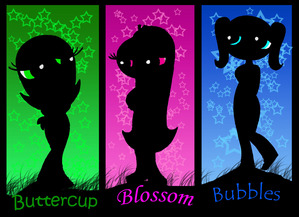 PPG teens.
(Note: they powerpuff girls are 17 and the rowdyruff boys are 18)

NARRATOR:Ah! What a beautiful day! The sun is shining, the birds are singing, the girls are probably just waking up as the sun rises!

BUBBLES:Yes you are! I'm not getting up!

NARRATOR:Man Blossom, get ahold of yourself! Do you have any idea what time it is??!!

PROFESSOR:Blossom, why ya up so (yawn...) so early?

BLOSSOM:Because Proff- wait your right! Why am I awake so early??