The Runaways Best Quotes and Memorable Quotes
posted by JennyRocker197 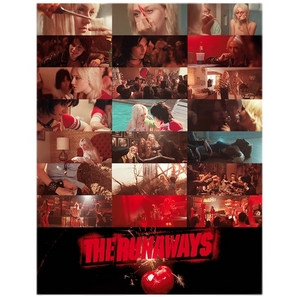 Cherie Currie: I just wanna spend time with my family.
Joan Jett: Your family? Are we not your fucked up family now?


Marie Currie: You took Mom's black heels?
Cherie Currie: Like she's ever worn anything twice? Anyway, you should be more worried about her finding out about how old your skanky boyfriend is.
Marie Currie: I'm sorry. Does your boyfriend have a car? I'm sorry, do you even have a boyfriend?


Cherie Currie: Hey, Derek, did Marie tell you she's not wearing any underwear?


Tammy: My brother says guys don't like girls who are tough. He says guys like girls to be soft and flirty.
Joan Jett: He would say that, he's a pussy.
Tammy: He does spend a lot of time doing his bangs.


Joan Jett: Hey, what kinda amps do you guys got?
Guitar Teacher: Um, I think for now we'll remain... unplugged.
Joan Jett: No, man, I wanna play, like, Chuck Berry. "Johnny B. Goode," you know?
Guitar Teacher: We'll get there. We'll get to Johnny. But for now... 'On top of Old Smokey. All covered with snow. I lost my true sweetheart. From a-courtin' too slow... '
Joan Jett: 'Old Smokey'? That's goofy, man. How 'bout 'Smoke on the Water'? Come on, I know you know that one.
Guitar Teacher: Finger the E chord, like so. 'On top of Old Smokey... '
Joan Jett: 'All covered in blow... I dumped my poor sweetheart... for screwin' too slow.'


Joan Jett: Uh, are you Kim Fowley?
Kim Fowley: Lemme guess. You sing in a band. And it's the greatest fucking band in the world. And I'm the luckiest dogfucker because I get to hear it first.
Joan Jett: I'm, uh... I'm Joan Jett. I play guitar.
Kim Fowley: Joan Jett, that's a cool name. You guys got a demo?
Joan Jett: No... No, guys, man. I want to start an all-girls rock band.
Kim Fowley: Really. Well, maybe I am the luckiest dogfucker after all... Sandy! Sandy the drummer, this is Joan Jett. She claims to be some sort of guitar goddess.
Joan Jett: Well, I didn't say that... that 'goddess' thing.
Sandy West: It's cool.

Kim Fowley: What in the fuck have you girls been doing over there?
Joan Jett: We've been practicing! Like you said.
Kim Fowley: Well, get back to it. You bitches are gonna be bigger than the fucking Beatles!


Kim Fowley: Repeat after me: 'I'll give ya something to live for. Have ya, grab ya, till you're sore.'
Cherie Currie: I can't say that.
Kim Fowley: No? Okay. Bye-bye. Go sell girl scout cookies.

Kim Fowley: I like your style. A little Bowie, a little Bardot, and a look on your face that says I could kick the shit out of a truck driver.


Kim Fowley: Dog shit! Urine-stained dog shit! Rock 'n' roll is a blood sport, a sport of men. It's for the people in the dark, the death cats, the masturbators, the outcasts who have no voice, no way of saying I hate this world, my father's a faggot, fuck you, fuck authority - I want an orgasm! Now, growl! Moan! This ain't women's lib, kiddies - the is women's libido! I wanna see the scratch marks down their fucking backs! Now, do it again. Again. Like your boyfriend just fucked your sister in your parent's bed. LIKE YOU WANT A FUCKING ORGASM!

Joan Jett: No, man, I like 'Airplane' better. 'Jefferon Starship' sounds like a fucking Disney ride or something.
Cherie Currie: My mother's gonna kill me. She's gonna take a gun and kill me. Don't you guys have any kind of curfew?
Joan Jett: Nah, my dad split. He was the strict one.
Cherie Currie: Yeah? Mine left, too. Well, he didn't really leave, ah, he was kicked out and replaced.
Joan Jett: Do you take the garbage out now?
Cherie Currie: Yeah. Well, me and my sister.
Joan Jett: Yeah, me too.


Kim Fowley: Pig stink! They'll eat you alive out there! Rock 'n' roll is tough music played in tough venues! Men don't like to seem women anywhere but in their kitchens or on their knees - let alone on stage with guitars. Now, buckle up and get ready for bootcamp, babies - you're gonna be trained like the Viet fucking Cong.
[shouts outside]
Kim Fowley: Bring it in!
[Guys filter in carrying crates filled with junk]
Kim Fowley: Okay, filthy pussies, today is heckler's drill. These degenerates here are not your fans. They're not here to tell you how pretty you look, they don't want your fucking autographs. They want to hurt you. They want you to retreat. Do NOT.
[the girls look at each other wearily]
Kim Fowley: Now, move it, move it - I wanna see you bitches to the death dance. Play!
[Guys start throwing bottles and bricks and garbage]
Kim Fowley: Incoming!


Kim Fowley: You hear that? That's the sound of hormones raging.


Kim Fowley: Cherie Currie. Cherry bomb. Sex kitten. Brigitte Bardot in a trailer park. Joan Jett. The rock 'n' roll heart, street tough brunette. Sandy West. Miss California with a joint in her mouth and a chip on her shoulder. Lita Ford. The love child of Sofia Loren and Ritchie Blackmore. You do not wanna fuck with Lita.


Joan Jett: Hey, hecklers drill really worked. This girl threw a can at me and I threw it right back at her!
Kim Fowley: You girls were doing the death dance tonight. Showed those little pussies how to cock fight.


Sandy West: What the fuck?
Cherie Currie: What, we're supposed to all share one bed?
Lita Ford: Fuckin' Kim, man!


Joan Jett: Open up, ya filthy varmint. Compliments of your non-alcoholic father.

Joan Jett: Hey, what the fuck? Plug me back in! Asshole.
Band Member: Watch your mouth, kid, or we'll have to turn you over to child services.
Joan Jett: Fuck you, old man!
Sandy West: [band member throws a cigarette at Joan] Hey, what's your fucking problem?
Joan Jett: I wouldn't, man. It's a lose-lose situation.
Band Member: How's that?
Joan Jett: Well, if you win, you beat up a girl. If you lose, you got up by a girl.
Sandy West: A teenage girl.
Band Member: Sound check's canceled. You'll have one if you ever get to headline. Now go to your rooms, do your fucking homework or something.
Joan Jett: Like we need a sound check, you prog rock dick.
Sandy West: Pretty soon you'll be opening for us!
Band Member: Opening your legs, maybe.


Kim Fowley: Girls nowadays, they don't have any role models. This band is self-empowerment, man - Aphrodite, Cleopatra, Eurydice! No more second-class status, sitting at concerts with asshole boyfriends who worship bands from a Popular Mechanics evalutation of amplifiers. The Runaways have the most chance of any group I've seen... To do with the Beatles did. To tear this world apart.


Cherie Currie: I'm taking a break.
Lita Ford: Again?
Kim Fowley: No, you're not. You dogs wanna stay up all night, eating pussy, sucking cock, chewing Quaaludes, that's fine. But not until you get this song down. Now, do it again: One! Two! Three!
[the girls start playing]
Kim Fowley: Horse shit! Horse shit!
[Cherie laughs]
Kim Fowley: What are you laughing at? You think you can sing like that in front of people? In front of customers? You bitches need to start thinking like men. No snips, no snails, no puppy dog tails - men wanna fuck! Men want this! Filthy pussy! And you're gonna give it to them. You're gonna put it in their faces and then take it away, just to break their fucking hearts. What's wrong, Cherie, are you tired?
Cherie Currie: Yeah.
Kim Fowley: Yeah, are you bored?
Cherie Currie: Yeah, I am, actually.
Kim Fowley: Well, guess what? You're not allowed to be tired, you're not permitted to be bored. You're an employee. You are my property, and you'll do as I say or you can go flip tacos with your better-looking sister.
Cherie Currie: Fuck you, Kim. I'm losing my voice. I'm taking a break.
Kim Fowley: Hey! News flash, diva: This ain't the opera. They're not coming to hear your chops. They're not coming to hear you bang on your drum. We are in the music business. You wanna be artists, cut off your fucking ears and mail them to your boyfriends. You wanna be rock stars, listen up. Now, Cherie's lack of greatness - her lack of rock 'n' roll authority - is getting in the way of our product. What is that product? Sex! Violence! Revolt!


Scottie: Wake up, we're almost there. Hey, if you're holding any drugs, get ride of them... Now.

Kim Fowley: Are you becoming one with Japan?
Joan Jett: Well, I dunno - I learned how to use chop sticks.


Kim Fowley: I need you to keep it together there for me, Joanie.
Joan Jett: Yeah. Yeah, sure.


Lita Ford: Did you know about this?
Cherie Currie: Kim sent them over. They just showed up at my house with cameras - what was I supposed to say?
Joan Jett: How about no? How about, 'I'm a singer in a band, not Linda fucking Lovelace.' Look at this! When did you do this? This is exactly what Kim wants. He's gonna be really happy! But this is all they're gonna say about us! Do you think anybody's gonna take us seriously?
Cherie Currie: It's just publicity. It helps everyone.
Joan Jett: Well what were you thinking, publicize the music! NOT YOUR CROTCH!


Scottie: Don't worry about them... You're the one they want. You're voice. It's your face on the t-shirts.


Marie Currie: Well, if it isn't Mary, mother of God. What, no disciples? No cameras?
Cherie Currie: Just me.

Cherie Currie: So, uh... Do I have to actually say all the things I want to say or do we still have the, you know - sister thing?


Kim Fowley: You dog cunts'll be lucky to get a gig singing in the shower.


Cherie Currie: I think I just need a break... From the band.
Joan Jett: If you haven't noticed, Cherie, we're in the middle of cutting a record.
Cherie Currie: I just gotta spend time with my family, you know?
Joan Jett: Who? Youre mom in Indonesia? Your drunk dad? Are we not your fucked up family now?
Cherie Currie: I can't do this anymore. I need my life back.
Joan Jett: This is my life.


Kim Fowley: The Runaways were... a conceptual rock project that failed. It's all mechanical anyway. The only guy who's honest is the guy who sings in the shower. Everyone else is a prostitute. Do I regret that they turned on me? No, I'm glad they turned on me. It shows spirit. If I'm training a wild dog, and the dog bites my hand, I know I've trained him well... My hand is made of iron. Great rock 'n' roll comes from torment. That's all it took. Look at her, 16 years old and she's already a creep. They'll be fine. In a few years they'll all be living in trailer parks back in the valley. Fat, pregnant, and happy as fleas on a dog. Me, well, I'm on my way to becoming Rock and Roll Legend.

Tammy: I wish I could play. I'd be in a band with you.
Joan Jett: Yeah, well you can't.
Tammy: I hear Cherie's trying the acting thing. You don't need her. You should go solo. Like Bowie. Bowie's just Bowie, he doesn't need any band.
Joan Jett: They were my songs. I wrote them. She just sang them.
Tammy: Yeah, but people always remember the singer.

Those are my favorite movie lines from The runaways movie. 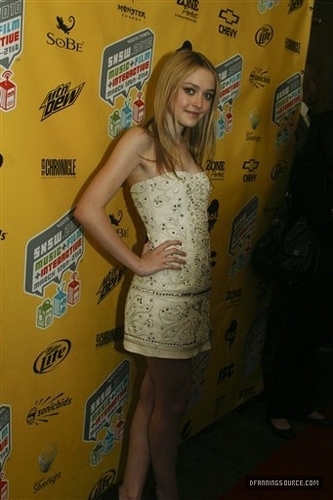 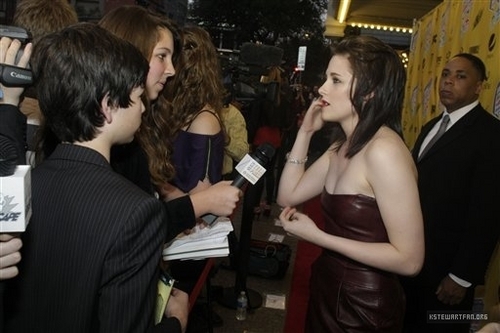 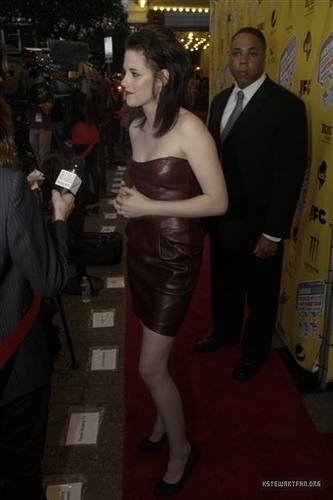 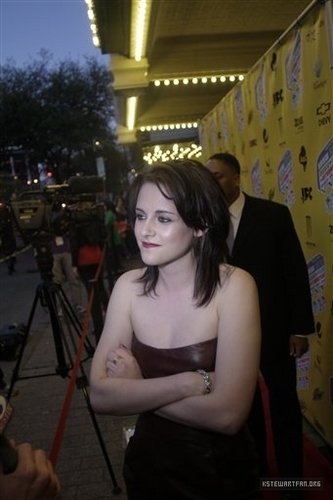 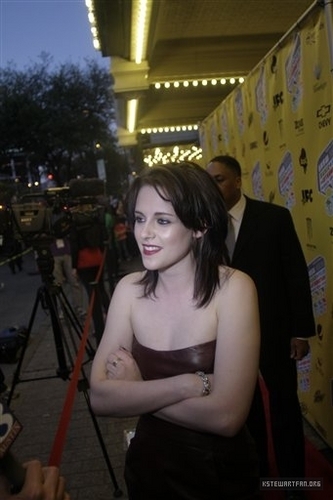 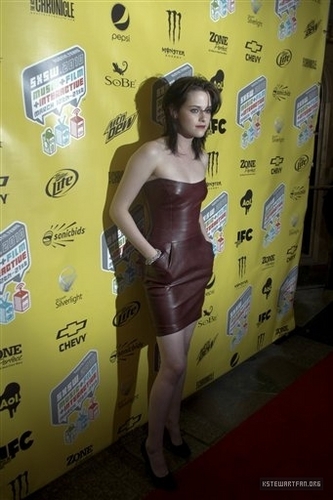 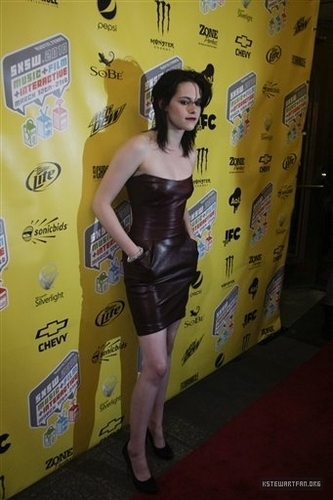 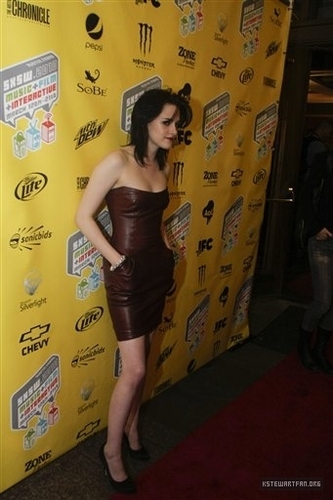 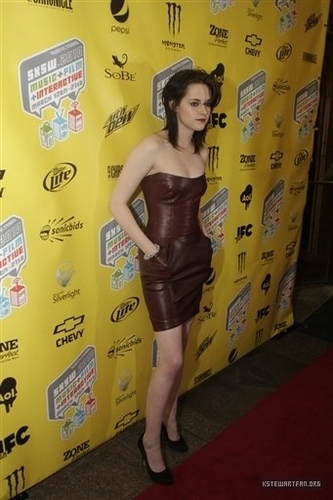 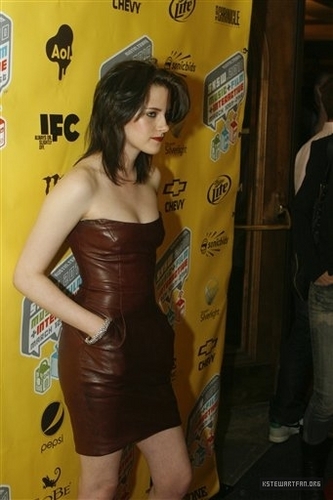 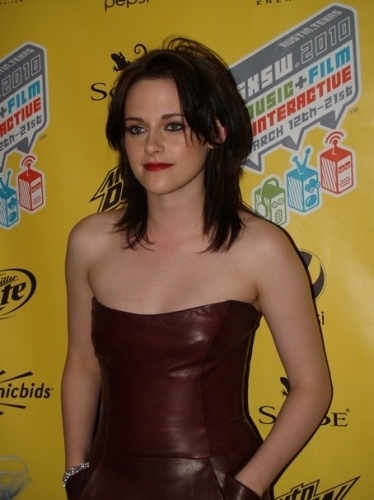 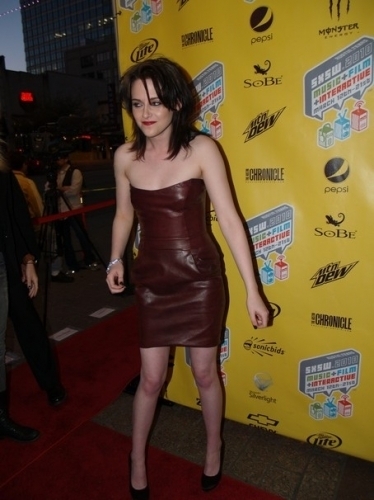 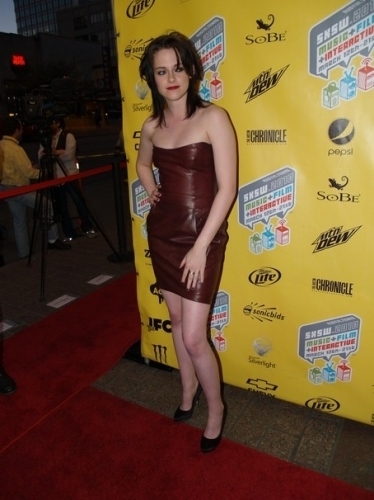 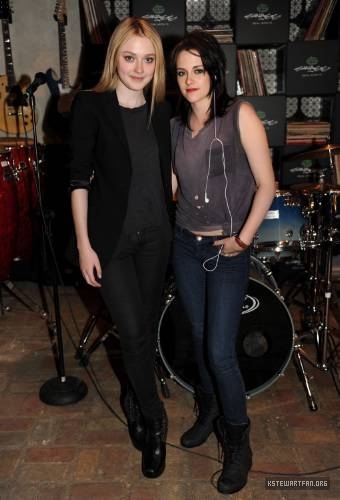 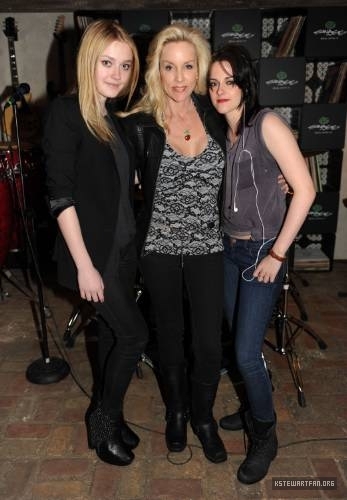 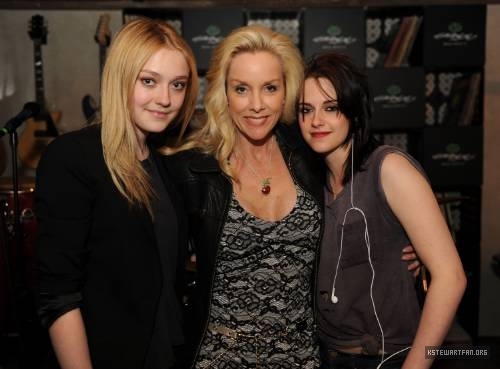 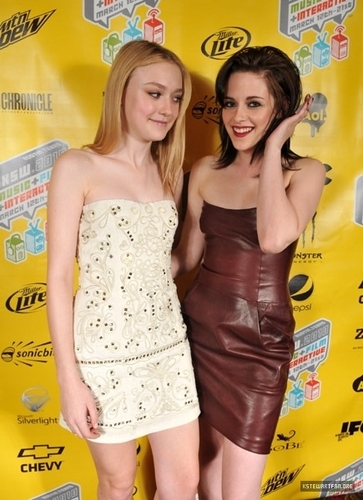 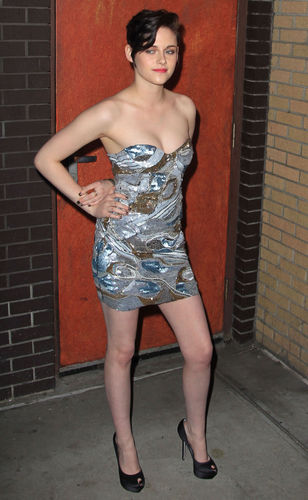 2
New York City Premiere of "The Runaways"
added by alessiamonari