1
Dark Shadows Trivia
posted by deathroman13
From the IMDB website placed here so it is easier to read.

-This is Tim Burton's eighth film with Johnny Depp, his seventh film with Helena Bonham Carter, his fifth film with Christopher Lee, and his second film with Michelle Pfeiffer (Pfeffer had starred in Batman Returns twenty years previously).

-Michelle Pfeiffer and Helena Bonham Carter are in talks to star.

-Anne Hathaway, Lindsay Lohan and Jennifer Lawrence auditioned for the role of Angelique.

-Kathryn Leigh Scott reported at the Dark Shadows Festival in Brooklyn (August 19-21, 2011) that she, Lara Parker, David Selby and Jonathan Frid were treated "like royalty" when they arrived on set for their cameos during the first week of July 2011, and that Johnny Depp walked up to Jonathan Frid and said, "None of this would be possible had it not been for you" referring to Frid's original portrayal of the Barnabas Collins role and its impact on the success of the original series.

-Chloë Grace Moretz (Carolyn Stoddard) and Gulliver McGrath (David Collins) were also both in the the film Hugo but shared no screen time together.

-Jonathan Frid, Lara Parker, David Selby and Kathryn Leigh Scott, who played Barnabas Collins, Angelique Bouchard, Quentin Collins and Maggie Evans/Josette DuPres in the original Dark Shadows, appear at the ball at Collinwood Manor in two scenes: 1) when they are welcomed at the door by Barnabas, and when Alice Cooper begins his second number, Elizabeth is seen talking talking with Scott, Selby and Parker.

-To prepare for his role as Barnabas Collins, Johnny Depp undertook a weight-loss regime and a diet of green tea and low-sugar fruit, getting his weight down to 140 pounds.

-Eva Green described her role of Angelique as "Bette Davis and Janis Joplin mixed together."

-Christopher Lee stars with Jonny Lee Miller in this film; decades earlier, Lee had appeared with Miller's grandfather Bernard Lee in the 007 film The Man with the Golden Gun, which was based on a novel written by Lee's cousin Ian Fleming.

-This was Jonathan Frid's last film.

-Tim Burton, Johnny Depp and Michelle Pfeiffer were fans of the original Dark Shadows, having watched it when they were young.

-When Michelle Pfeiffer heard about an adaptation of Dark Shadows, she called up Tim Burton to ask him for a part in the film, something she rarely does.

-With no time for rehearsal prior to filming, Tim Burton found a way to put his entire main cast in the mindset of their respective roles: He gathered them together on the set for a photo session in which they replicated the famous image of the original Dark Shadows cast all standing in the foyer of Collinwood. This image evolved into the film's teaser poster.

-The producers scoured the UK and Maine to find an appropriate fishing village to film Collinsport in, but couldn't find one that fit. Thus they constructed the whole town from scratch in Pinewood Studios.

-For the sex fight sequence, the actors worked with stunt coordinator Eunice Huthart and wore harnesses that spun them through the air. Eva Green was not too fond of the sequence since she doesn't like heights.

- A 33-foot-high miniature of Collinwood Mansion was constructed, measuring 1/3 in scale to the actual set of the Mansion.

-Production designer Rick Heinrichs designed Collinwood to reflect its maritime heritage (the mansion was close to the ocean, and its owners have a background in fishing); ocean motifs like fish and mermaids are present throughout the house and its furnishings, including seahorses in the fireplace along with statues of the sea god Neptune.

-Tim Burton wanted the film to reflect the era of its setting, and showed cinematographer Bruno Delbonnel several 1970s vampire movies to help him understand the way the film should be shot.

-According to costume designer Colleen Atwood, she designed the 18th and 20th century costumes and then overlaid and blended in elements from both to create a smooth, similar feel that suited the film.

-Josette duPres's ghost scenes were shot in an underwater tank.

-In Dark Shadows, , Dr Julia Hoffman was played by Grayson Hall, wife of the show's head writer Sam Hall. In an interesting parallel, Dr Hoffman in this film is played by Helena Bonham Carter, wife of the director Tim Burton.

-Shipped to theaters under the code name "Night Moves".

-During the sex fight sequence at one point Angelique had at least 4 arms wrapped around Barnabas.

-At the Collinwood ball, Carolyn repeats the first lyrics of "The Ballad of Dwight Fry" to her mother, causing her to get tense. The lyrics ("Mommy, where's daddy? He's been gone for so long. Do you think he'll ever come home?") hint at a possible Dark Shadows storyline: Carolyn believes Elizabeth murdered her father.

-Eva Green makes an uncredited appearance as Angelique's mother in the prologue.

-The shots of the ocean waves crashing onto the rocks in beginning sequence of the film are almost identical to those from the original TV series opening.

-Cameo
Rick Baker: A decorator at Collinwood.
Share this
Director Trademark
Tim Burton: [Jack Skellington] Jack's face appears on the scarecrow amongst the pumpkins at the manor when Willie first meets Barnabus.

----Spoilers ----
The trivia items below may give away important plot points.
-Victoria/Maggis (Bella Heathcote) is committed by her parents to Windcliff Sanitarium. In the original series, Maggie Evans (Kathryn Leigh Scott) is sent to Wyndcliff Sanitarium, which was run by Dr. Julia Hoffman (Grayson Hall), after Barnabas Collins (Jonathan Frid) kidnaps her and attempts to brainwash her into thinking she's Josette du Pres.

-There are indications of Carolyn Stoddard being a werewolf, long before it is revealed:
she is seen dining under a picture of the full moon
Angelique compliments her as growing into "a fetching creature."
and Barnabas watches the Scooby Gang on TV exclaim about a werewolf.

-According to Tim Burton, the last scene of Dr Hoffman's revival was in keeping with "the soap opera structure of the story" (Burton is noted for not doing sequels).

-The character of Victoria Winters in this film is based on her Dark Shadows incarnation (a governess at Collinwood Mansion), but also incorporates elements of Maggie Evans (an lookalike of Barnabas's old lover Josette duPres, who spent time in an asylum and who can see and communicate with ghosts).

-Carolyn Stoddard is the fourth werewolf in the "Dark Shadows" saga, but the first female one ever.

-According to Dr Hoffman, David believes his mother is an immortal entity. In Dark Shadows Laura is described as a Phoenix, a fire-based immortal.
_Black_Angel_ likes this 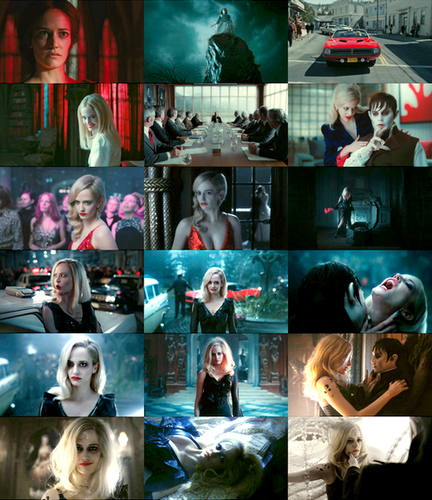 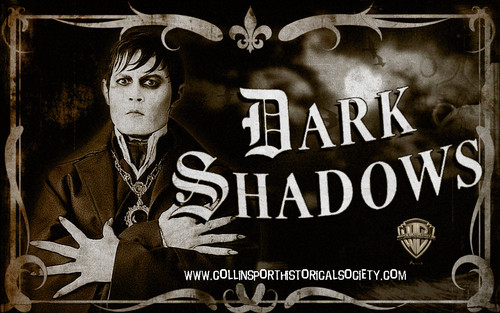 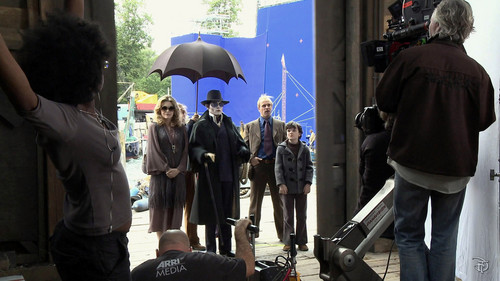 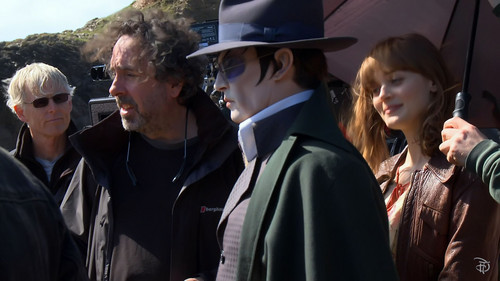 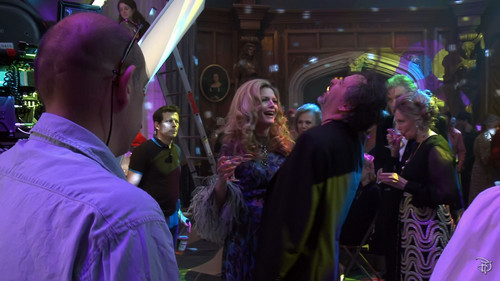 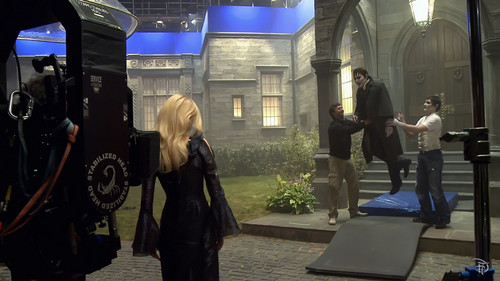 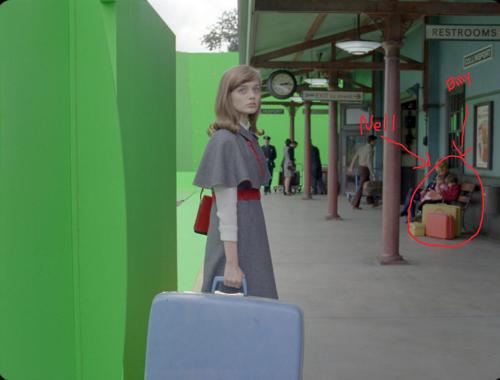 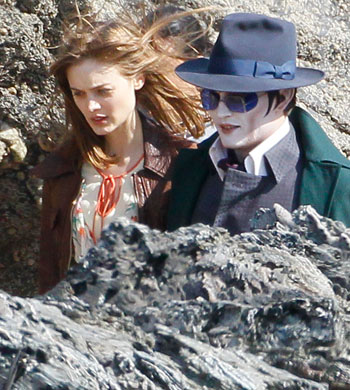 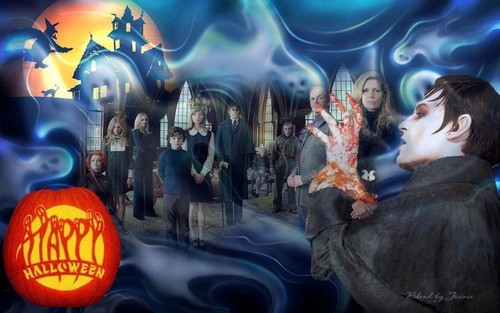 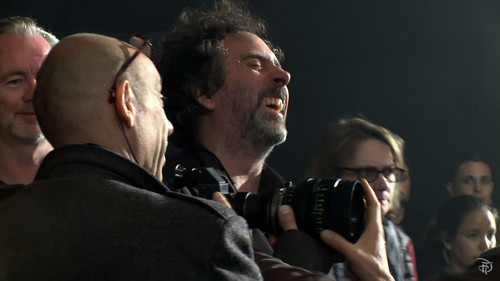 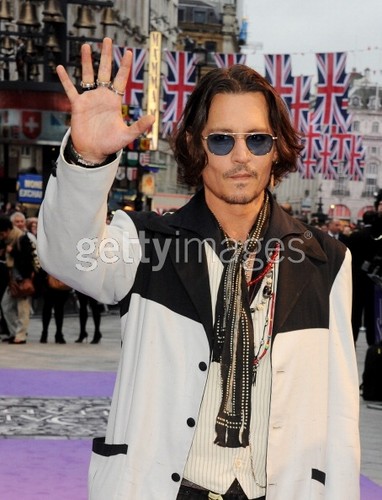 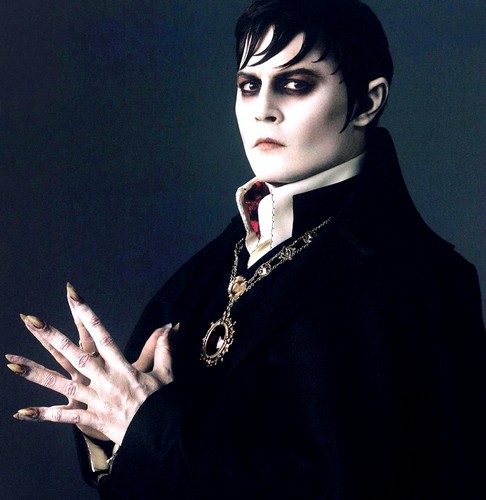 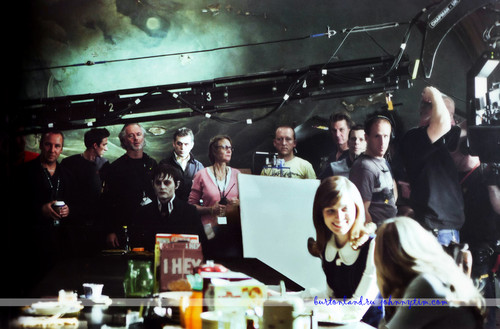 On set
added by johnnydlover 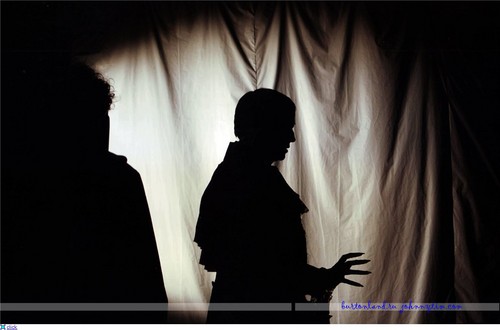 1
Dark Shadows Behind the Scenes
added by DepplyinLove 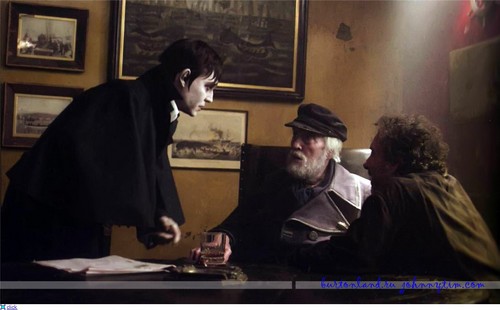 Dark Shadows Behind the Scenes
added by DepplyinLove 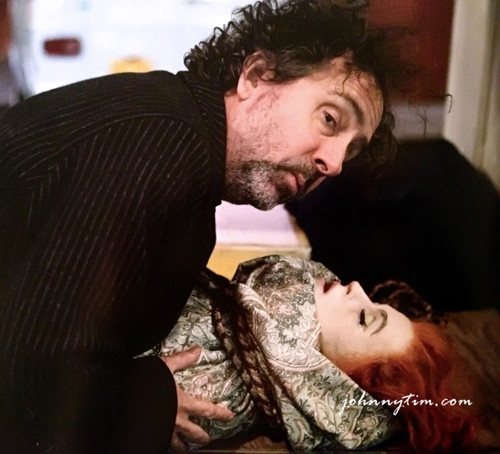