A/N: I own no characters.
Plz R&R!
Sorry to keep you waiting so long. There's a bunch of excuses and I know you don't want to hear them!

I wrote Charlie a note. Explaining I was sick and would not go to school the next day, or, technically, today. I felt really crappy. And, my head hurt! At least I had something to distract me from my heart.

Anytime I even thought of them, the little edges around the hole would tear and burn. Sometimes, I even regretted ever finding out who they were. I mean, on a day to day basis for the rest of my existence, I would wonder if they really were real. Well, I know they were real, but, what they were, was that real? Was I crazy? I never really knew. I mean, I had memories, but who even knew if those were real? They could be from my subconscious or imaginations.

I went back to bed and fell asleep, thinking deeply made my head hurt even worse. Then I had a nightmare.

"Bella! Bella! What is it?" Charlie asked, worried.

"Okay. See ya later, Bells. And, I got your note. I already called in sick for you at school."

"Thanks, Dad." Then, Charlie left. I was glad when I heard the cruiser pull out, I was already hyperventilating in fear. I don't know what it was about the nightmare that scared me. I ended up fainting.


Everyday after that, I was "sick." I went to bed early, actually, not even leaving my bed, excpet to go to the bathroom. I ignored my friends calls. I was lifeless, Charlie had to fend for himself in the kitchen or order in. I even ate in bed.

I didn't really care, I mean, what did I have to live for anymore. I didn't even know if my truest of true loves exsisted. How crappy would that be. Yes, people remember them, but, how did I know he was the true love, my Romeo, if he was no vampire.

That was mostly why he was my true love. And, now, in the condition I was in, true love made me sick, since, what I had been informed, I had lost it.


Sunday was the day Charlie was tried of my "sickness."

"Bella? Can you come down here?"

When I got downstairs, I saw irritation in Charlie's eyes.

"Bella, are you still sick?" Charlie asked, I wondered why he was wondering.

"Yes," I replied, I tried to make my voice raspy.

"I think maybe I should take you to the doctor maybe. If you've been sick this long." NO! I couldn't go to a doctor. I wasn't sick!

"No, I'm actually going to school tomorrow." I anwsered. "I feel alot better."

"Good, I was starting to get worried." I wasn't paying attention to what he was saying after that. I was thinking heavily, having a heated debat with my own mind on whether I should find out if he was real or not, why it would matter to me, how it could help me. The pro's and con's, as you could call it. I was wondering how I would be tomorrow, I didn't feel like I wanted to sit and chit-chat with everyone. I figured out what I was going to do on Monday.

I would be anti-social. That would help me uncover the mystery of my fictional past, I wouldn't have to worry about talking to everyone while figuring things from my memory.

Perfect, I thought. I never thought I would want to be, but, I had to, it was them or friends, and right now, to prove, to myself, I wasn't crazy, they won.


A/N: Did you like it? Sorry I've kept you waiting! I've been busy. Plz R&R and Tell me what should happen next!!
patrisha727 likes this
wowzerz130 oh no... wheres chapters 1-7? did i really miss so much??? HELP!!!
8
Renesmee Cullen's Story, Chapter 8
posted by renesmeblack
Sorry for the huge gap in the middle, folks but I'm working out the kinks. Thx!

"JACOB BLACK!!!" Renesmee yelled. " What. The. HELL."
Uh,oh. Nessie has been this mad only once before. That was when I finally had to reveal the love between her mother and I in the awkward past. She gets all pink in the face-seriously, she inherited pale skin from BOTH parents- and her voice has authority and VOLUME in it. I really start to fear, not her, but what she is able to do, and then I get ready to start begging for her to please STAY.
"All I said was, you're half-vampire," I said.
"Yes, but I'm also...
continue reading...
13
Bella's New Mate Chapter 8 James' POV and Bella's POV
posted by Repo-girl
Hi! Thank you all for your nice reviews! It looks like all of you are on board for the "special scene". I will write it ASAP. I have some fanfics that are M rated so, I have some info. Also, there will be a POV switch in this. Now on with the story!

I was so pissed. I was trying my best to be nice to Bella but it was so damn hard. She smelled so good. Better than I remembered. She didn't like me. Like you care, I told myself. She's just part of the game. Nothing else. But there was another part of me that liked her. That wanted to know her. That wanted her to be my mate and...
continue reading... 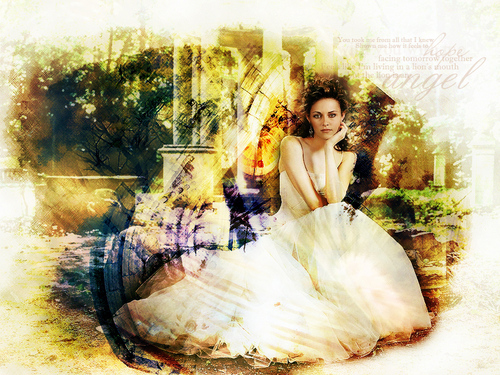 1
Edward and Bella
added by pameee

3
Twilight
added by ctaim2
1
My True Love Chapter 17. Jacobs POV
posted by Twilightsauce
Hi, this is the 17th chapter of My True Love. Some of you may have not read it, if you havent then please read on, but you might want to go and check out the others first (they are all on my page) the next-and last!- chapter will be posted in a few days so, keep and eye out and I hope you enjoy!
Love Twilightsauce

We had all come here for a picnic today, in the meadow, because it was a sunny day. We were all here the whole pack and all of the Cullen’s. The meadow was deserted and it looked peaceful and serene with rainbow spots dancing around.
Nessie was heavily pregnant and our baby was due...
continue reading...
11
Fire and Ice 2: Chapter 1:The End of my Beginning
posted by gossipgirlxoxo
I opened my eyes, I moaned once I saw Alice peering over me. “You sleep like that dead” She told me. I rolled my eyes and got up, Alice pushed me back down. “Edward said that I had to make sure you got your sleep” She said, I couldn’t help but smile. “What time is it?” I asked. She rolled her eyes. “He’s not home yet” She said. “Well you’re the one who can tell the future when is her coming back?” I asked she crossed her arms on her chest. I rolled my eyes and hugged her, she didn’t hug me back. “I’m sorry, Alice you are the best babysitter ever” I said, she...
continue reading... 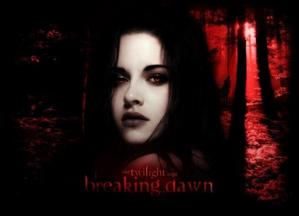 Sup people! Here is Chapter 3 of Bella Becomes A Vampire! I hope you like it! Don't forget to leave a comment telling me how much you like it!

When we got up to Edward's room, I shut the door behind us. Edward leaned in slowly, our lips met, I twisted my fingers into his hair as he did mine. He threw me on the couch, this kiss was a little over his line of security, but he didn't seem to care. We were both on the couch, our fingers interwound in each other's hair. All of a sudden Emmett's voice boomed into the room below us. The kiss stopped abdruptly and we looked at each other....
continue reading...
4
What Happened After Breaking Dawn
posted by alice_cullen_12
Breaking Dawn is over, but the story isn't. 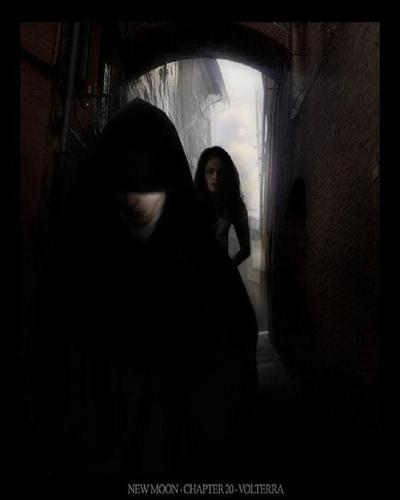 1
Twilight
added by ctaim2
5
Revenge!! Chapter one
posted by kayleebabee
"Umm I dunno" I laughed we were all playing poker and I had beat everyone else 13 hands to seven and Alice had just asked me how I knew how to play poker as I had never played it before.
"You and Edward must Be practicing At night since there is nothing exciting for you to do. I mean Nessi's Moved in with Jake and only comes round every day so what else can there be to do?" Jasper howled with laughter at Emmets Snide comment. I rolled my eyes, laughed then retorted " well Emmet at Least Edward Is not on a six month ban." I sniggered as Emmets face clouded over and he sulked.

Then my phone rang...
continue reading...
7
Bella's New Mate Chapter 5 James' POV
posted by Repo-girl
Hi! The story is coming along great! Thank you to all of you who are reading this story for your nice reviews! Just to answer some of your questions, James and Bella will fall in love but, don't worry. There will be a part with Edward in the story. A major one. I just need to think of how I'm going to do it. Now, on to the story!

As I watched Bella fall asleep, I couldn't help but notice that she was a vocal dreamer. Of course, I didn't really care about her. She was just like Victoria was to me. A useful partner, nothing more. I just wanted to get revenge against Edward....
continue reading...

A Twilight Story ||| EP10 ||| Kidnapped
added by zanesaaomgfan
video
4
Bella's New Mate Chapter 32
posted by Repo-girl
Hi! This is the second chapter for today! I will be all caught up after this and then, I will write more! Enjoy! 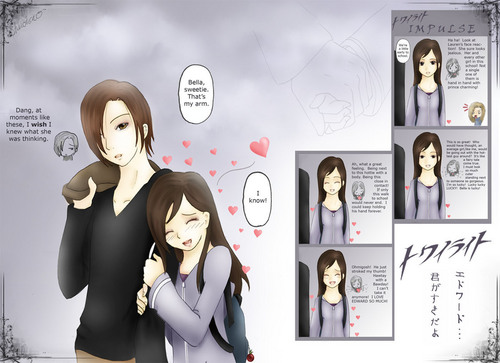 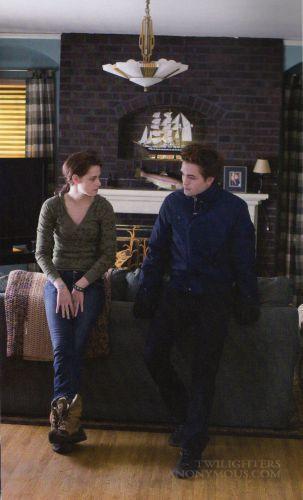 Bedward
added by pameee
4
ME AND THE CULLENS - Chapter One
posted by callejahLUVSed
Hi, I'm Isabella Swan but you can call me Bella. I live in Forks, with my father Charlie. I've lived in this tiny town my whole life. I know every corner, every bush, every tree like the back of my hand.
My best friend is Jacob Black. He lives a few blocks away from me, on La Push Drive. We've known each other since we were kids, and we've always been close. Never left each other for anyone. Always been each others rock. When my mum left, he was my shoulder to cry on. When his mum died, I was at his house 24/7. Nothing has ever come between us. That was, until a new family moved into town,...
continue reading...
14
Bella's New Family Chapter 10
posted by sexy_vamp
Disclaimer: I do not own any of the characters… just this story.

A/N: Please, please, please review. I really need you all to keep me motivated. So read and let me know what you think of my story.

*Back to BPOV, same day that Jake came to visit Bella at the Cullen’s*

I felt better knowing that I got to apologize to Jake. I know that I jumped on him and he didn’t need it but I was angry and I shouldn’t have attacked like I did. And I am sure that Ashni didn’t like that I jumped all over him either. I regretted it the moment I opened my mouth. I really should learn to think before...
continue reading...
More Cards
1234567891011