Sam kept a firm disclosure of his experience being possessed, thrown into the pit, and then suddenly re-established back on earth in one-piece. He didn’t want to burden his older brother with his own personal demons. Dean remembered what it was like after he woke up underground in a coffin, digging his way to the surface, then tormented with horrific thoughts of blood and flesh to the blade. So he knew how much it hurt him to refrain from sharing his brutal experiences with Sam. Sometimes it was just best not to hash things up, unless they needed to be in the open.

Sam’s return didn’t sit well with Lisa either when Dean insisted he had to leave on the road again. Things were already shaky between them for months, ever since she’d revealed the truth about Ben, who as it turned out was also his son. For years Lisa had been afraid to confront Dean, scared that he would never be there for Ben while he was growing up. It was true. Dean’s life as a hunter kept him away from any emotional connections to anyone in hopes of protecting them from danger. And now that he was connected to this child by blood, the complications of his job seemed to smother him and eat away at his conscience.

And then there was the crucial fact of feeling abandoned by their own guardian nerd-angle Castiel, whom recently had been sent back to heaven to become “God’s bitch” as Dean like to put it. Cas hadn’t bothered to even contact Dean since they’d prevented the outburst of the apocalypse. Jeez did that guy suck at good-byes.

Hopefully they’d get another lead on a hunt soon. Dean was just itching for another round of “kicking-Hell’s ass”, but first his baby needed refreshment. Just as he stepped out to fill the gas tank, Sam’s cell phone rang.

He picked up. “House of Pies can I help you?” The sound of that ridiculous attempt to hide his identity made Sam cringe. Yet another reason for Dean to poke fun at him.

“Sam?” the voice was female and very familiar. “Sam is that you?”

He paused before answering as the growing paranoia settled in.

Sarah? That was a name Sam never thought he’d hear from again. It had been over 4 in-half years since Dean and he helped this young woman destroy a cursed painting back in New York. Sarah Blake was the daughter of an art gallery owner and the second person Sam had ever gotten close to since Jessica’s death. Dean once told Sam he wanted him to marry her, she was so open and understanding to the Winchesters’ outrageous and reckless lifestyle. But before anything serious could happen with Sarah, Sam and Dean had to hit the road onto the next hunt.

“Sarah, wow it’s been a while.” He gestured into the receiver, running his fingers through his thick dark hair. “How are you…? I mean is everything okay?” Way to get all awkward.

“Sam… I know this must be weird for you…me just dialing you up like this out of the blue,” her voice sounded nervous and concerned all at once. “You know I wouldn’t have called if it wasn’t important.”

Sam inhaled. Strange as it was talking to a woman from his past, he didn’t feel the distance between them. “Sarah what is it?”

“I know this might be a lot to ask but…can you come to New York? I need your help?”


Having left the gas-station 5 minutes after receiving the sudden phone call from Sarah Blake, Sam and Dean had arrived in the outskirts of New York City, following explicit directions to a diner where they could meet. Dean was more cynical about the case than Sam. Normally when someone you hadn’t seen for ages contacts you, it usually doesn’t smell right. Dean knew that when he’d received a call from the thing that pretended to be his brother Adam. The thing that killed him and assumed his identity.

“Sammy you know this could be another trap right?” Dean said briskly. “I mean no way does some chic, who you haven’t talked to in years, randomly calls you out of nowhere asking for help. Do I gotta list all the nasty sons of bitches that have played us in the past?”

Sam scoffed at his brother pinching the bridge of his nose. “No Dean you really don’t because I’ve already heard it for the last ten minutes or so.”

“Right, so then you know that Sarah could be anything from a shape shifter, demon, angel, changeling-

-or a ghoul, I know! Dean look maybe we should just meet with her and see what this is about before we start breaking out the salt and holy water. She sounded worried about this friend of hers.”

Dean instantly shot Sam a playful glare. “Ah, this isn’t just about helping her is it?”

Sam’s expression turned sour with a hint of embarrassment. “What are you talking about?”

“Oh common you can’t pull a fast on me Sammy. Hot-chic like her. Stud like you. I’ve pretty much invented fore-play here.”

“Dude whatever, just watch for the sign to “Ricky’s Diner”, that’s where she’s going to be waiting for us.”

A clever smile poured on Dean’s lips, observing his little brother’s obvious abnormal behavior. Sam could never fool him. Whenever he liked a girl his first instinct was to get all sensitive, embarrassed and red in the face. Sarah seemed liked a touchy subject for Sam considering how long it was since they last spoke.

“Common dude it’s written all over your face,” he chuckled, “Why try to deny it, you still really like this girl.”

Sam shook his head, lips pursed in an awkward grin. The subject of women wasn’t something he cared to discuss with his brother.

“Dean we’re on a case that’s all.” He stated defensively. “Sarah called because she wants us to help this friend of hers. Now I’m not saying this could be a trap and I’m not saying it isn’t but what we do know is that this is strictly business, not fore-play.”

“I guess if it is some ghoul-bitch or demon setting a trap, we’ll get lucky either way.”

As the impala crossed a bridge, Dean cranked the knob to the tape player blasting Lynard Skynard’s “Saturday Night Special.” It was amazing how he never got tired of listening to the same music. Sam on the other hand wished he had an iPod.
ForsakenMoon19 I know this part is shorter than the last part, just trying to build towards the rising suspense:) 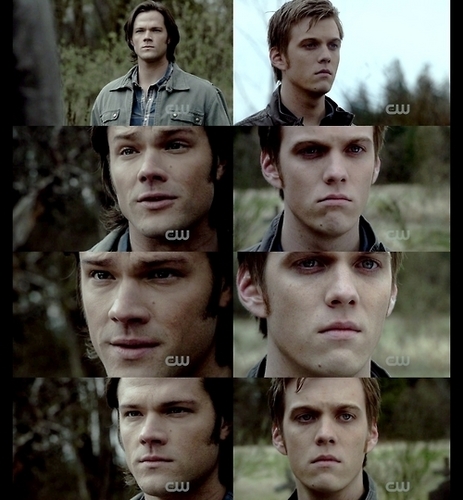 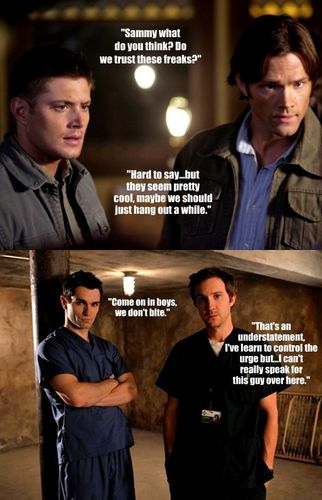 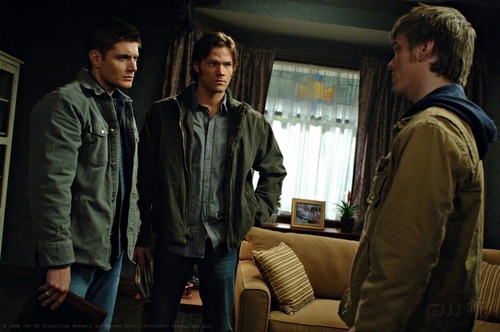 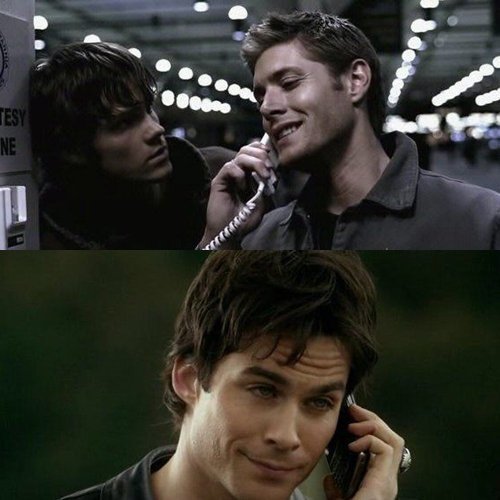 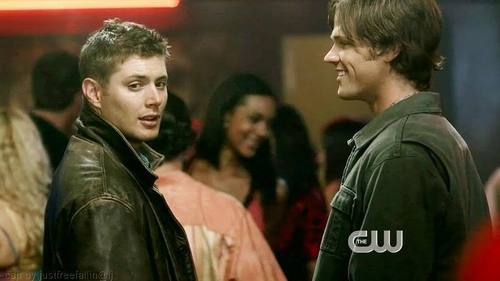 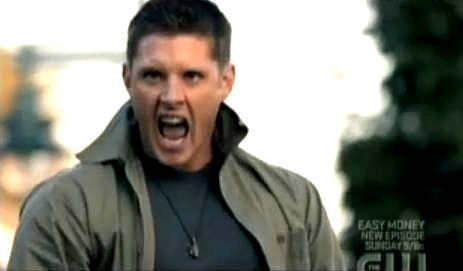 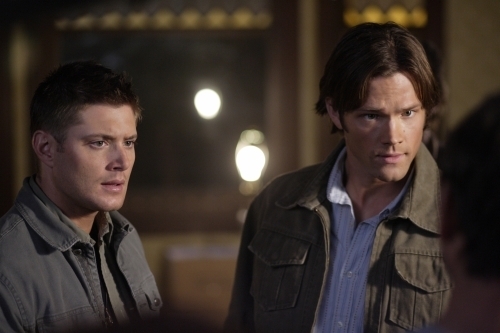 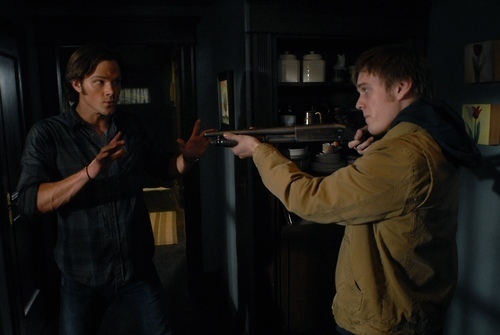 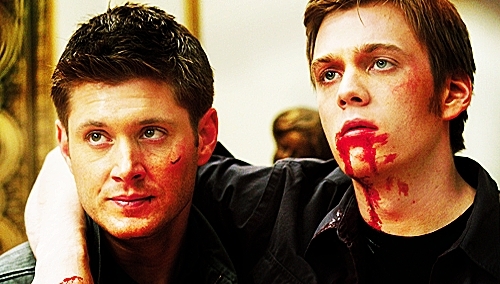 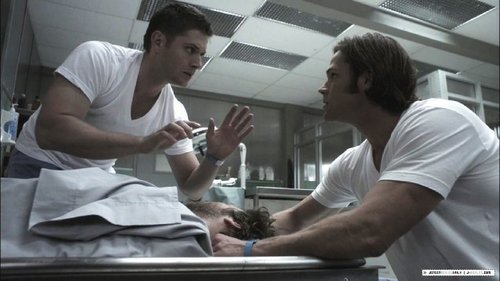