2
Out of the Closet and onto the Lab Table: Part 4
posted by TeamPeeta649
Spirit sleepily opened his eyes and let out a soft, pleasured moan. A large, gentle hand slowly stroked his hair. How he loved those hands. Spirit looked into Stein’s luminous green eyes. “How long have you been awake?” The only light in the room that allowed them to see each other came from the moon light that spilled in through the cracks in the curtain.
“Not long.”
“I don’t believe you.”
“Well, I didn’t want to wake you. You were sleeping so peacefully.”
“So you’ve been watching me sleep?” Spirit rolled over on his other side so his back was to Stein. “Perverted old man,” he mumbled.
Stein draped his arm over Spirit’s waist and leaned his chin on Spirit’s arm. “We aren’t as young as we used to be.”
“Speak for yourself! I haven’t aged a bit!”
Stein chuckled softly and kissed Spirit tenderly. “Go back to sleep.”
Spirit cuddled back against him and slowly drifted back to sleep.

The next day, Stein strolled down the halls of the academy, headed for the library. As he walked into the library he noticed Kid and Black Star. While listening to some of their conversation he heard them talking about Excalibur and decided to walk over. “Oh, you mean Excalibur, huh.”
Black Star turned around look up at him from where he sat on the stack of books. “Oh hey, Professor. Are you here for punishment, too?”
“Hmm, more like hiding from it.”
“What?”
“Nothing.”
After Kid and Black Star left, Stein sat down at a desk and let out a deep breath. “He probably won’t think to look for me here.”
At that moment Spirit kicked open the library doors. “Stein you idiot!”
Spirit stormed over to him and threw his lab coat at him. “You left your damn coat on my bedroom floor! Maka came in to wake me up and I had to explain it to her!”
Stein stood and pulled his lab coat on. “Well, what did you tell her?”
“I told her that I asked you if I could borrow it for an experiment!”
“See, problem solved. I don’t know why you’re so angry.”
“I’m angry because I know she didn’t believe me and she and I both heard you shut the front door on your way out!”
“I’m sorry. Do you want me to talk to her?”
“No! No...She still may not know exactly what’s going on. Just…let be more careful.”
“Okay.” Stein grabbed his chin and leaned in, kissing him.
Spirit’s eyes widened and he hit Stein on the head. “What are you doing?!?! We’re at work!!!”
“Oh come on. Just a little bit.” Stein grabbed him by the waist and laid kisses up his neck.
Spirit shuddered and pulled himself away. “No!” He ran and hid somewhere in the library.
Stein suddenly smirked. “Lets play a game! If I find you then I get to do whatever I want with you!” Stein stood there and waited. Only silence followed. “Okay! I’m taking your silence as validation!”
Stein walked over to the library doors and locked them; he didn’t want any disruptions. He stood in the center of the room and gazed around, looking for any clue of where Spirit was hiding. “Come out, come out wherever you are! You know you want me to find you!”
Spirit bit his lip and tried not to make any noise. Stein slinked around the library; he didn’t want to step too hard, he wanted to be absolutely silent. The dead silence in the room was deafening. Spirit became worried that his breathing would give him away. He closed his eyes and focused on erasing his breath. He was so focused that he didn’t sense the arms that were moving around him from behind. Stein pressed his lips to Spirit’s ear and snaked his arms around Spirit’s waist. “I got you.” Spirit shrieked and nearly jumped out of his skin. He stiffened and moaned as Stein licked his neck. “Right where I want you.”
Stein took of Spirit’s coat then his tie. His fingers moved to the buttons of his lover’s shirt and started undoing them.
“Stein, we’re in the school library! We can’t be doing this here!”
“Why not? You always used to love it when we got kinky.” Stein nibbled on his ear.
“I did not!”
“Yes you did. You even told me so.”
“You seriously misread what I was saying! You always take what I say and make it perverted!”
“Examples?”
Spirit’s face turned bright red in embarrassment. “No way!”
“Then you have no case.” Stein pulled Spirit’s shirt off and licked up the back of his neck.
Spirit grabbed at the ground and tried to pull himself away.
Stein let Spirit’s torso slip from his grasp then grabbed onto the rim of his pants and underwear. As Spirit kept pulling away it caused his own clothing to come off more. “Let go!”
Stein chuckled at his frustration. “Not a chance. You can keep pulling away all you want.”
Spirit huffed and tried to move back towards Stein, back into his pants. He blinked in surprise when he couldn’t go back more than a couple inches. He looked down at himself and his face turned even darker red.
Stein started laughing more.
“Shut up you creepy pervert!”
“I think you should redirect that pervert label.”
Spirit opened his mouth to yell at him more but instead snapped it shut.
Stein took off the rest of his clothes then started undressing himself. “You don’t need to be so defensive with me, Spirit.”
“I am not defensive!”
Stein rolled his eyes in amusement. “Defenses, denial, you certainly are a little fireball, aren’t you? You used to be to so cute and quiet.”
“Deal with it.” Spirit crossed his arms over his bare chest stubbornly.
“Hmm. I suppose I’ll have to now, won’t I?” Stein leaned back against a stack of books and pulled Spirit into his lap. “Well, I can certainly deal with you not being quiet. I like it when you’re loud.”
Spirit opened his mouth and instead of throwing a sarcastic comment at him a deep moan came out. His moans grew louder and more passionate as the thrusting went on. Stein nibbled on his ear as he kept thrusting. “I knew you’d come around.”
“Cut it out you screw head!”
“Aww, that’s harsh. Nice or I’ll have to punish you.”
“You pervert!!!” Spirit’s voice rang out and bounced off the library walls.

Spirit growled as he lay on the floor of the death room on his stomach. “Fucking Stein. Plugging me up with his fat headed-”
“Death Scythe? Why are you laying on the floor?” Death came into the room and looked at him quizzically.
Spirit jumped to his feet. “Lord Death! I uh, I just um, was a little tired.”
“Well by all means, sit.”
“Sit?”
“Sit.”
Spirit stared at him for a moment then sat down on the floor. His upper teeth clamped down on his bottom lip in a desperate attempt to hold in a howl of pain. Instead a low whimper escaped through the corner of his mouth. Luckily, Death didn’t seem to notice anything, so Spirit kept on biting his lip and let out a low moan of pain.
“Spirit, you and Stein need to go to Italy. Maka and Soul are in need for you help. I’ve already told Stein so you need to find him and go.”
“Yes, Lord Death.”

Spirit leaned his head on Stein’s back and tightened his arms around his waist as they sped down the streets of Italy on a motorcycle. “Someone’s affectionate today.”
Spirit bristled and picked his head up. “I was shielding my face from the wind!”
Stein chuckled. “Sure you were.”
Spirit’s face flushed. “I was! Don’t get full of yourself! I am not the cuddly type!”
“Is that why your arms are locked around my waist?”
“I don’t want to fall off! I’m not wearing a helmet! With your driving I could fall off at any time! Do you want me to die?!”
“No, but you can let go now. We’re here.”
Spirit blinked and looked up at the castle, the blush slowly fading from his face. “Oh.”

I apologize for the delay in the publication of this last part. It was my last week of school and I had exams so I was very busy study. 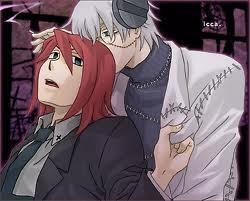 Mimi_islife and genghi2520 like this
andysixxscreams *brain explodes* hot 0//0
TeamPeeta649 Well thank you very much.
He Could Be The One
posted by RikuObsesser
Chrisko had a hard time making friends at his new school.He moved to Choshi,Japan from Georgia in the United States.
He had learned Japanese by the time he moved to Japan so he had no problem speaking to the locals.He was just very shy and so
was unable to make friends.When he entered class he of course introduced himself to the class in a polite tone of voice and bowed
to the class before taking his seat next to a guy who was studying for an up-coming test.He was handsome but he looked like he
worked himself way too hard."Okay class,"began the teacher."We are having a test on the history of Japan."...
continue reading...
1
inuyasha and miroku ~ yaoi 2
posted by mcluvin
Inuyasha felt nails urgently pulling him closer, rapid and desperate rolling hips caused him to shudder, exhaling Miroku's name. Miroku felt himself go completely insane at that moment. Feeling a jolt of heat run from his lower back into his cock he came onto the bare chest of the half demon before his own whimper followed inuyasha filled him, again barely whispering his name in ecstacy. Resting his head into miroku's glistening sweaty neck Miroku managed to moan