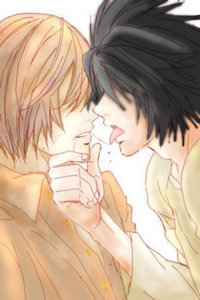 "mmm sugar" L smiled at his tower of sugar cubes. "want one?" L lifted up a suger cube to Light "L? your sugar cube are you su-" "omph" misa mouth covered L's hand as she ate the sugar cube "nummy!" she squelled, L looked away more pissed than ever and mumbled something about 'bitches eatin' mai cubes' Misa was nothing more to light now but an obsitical on the to L. "oh, I ran out" L said as monotoned as ever "misa," L said "could you run to the kitchen and get my other box, don't some back till you get it" "o-okay!" Misa said as she ran out thinking she was doing something important, 'chink' the door locked almost hitting her ass.

"Light" L said his hand still pressed against the door "we might not get another chance", Light's heart was racing. ever since the night that he had taken advantage of L he kept repeating the words in his head 'an eye for an eye' yet, he felt like being forced, he wanted to feel L's strength that he knew he had from when he punched him "w-what do you mean" Light felt faint he was quivering with excitment. L lunged forward swiftfully and push Light onto the bed "L- here? now are y-" L's slim finger met with Light's lips before he climbed ontop of him while lifted his finger to his own lips "I'm not waiting" Light moaned in pleasure as L's cold hand slid up his body Light's head tilted in pleasure and L took the opening to suckle on his lover.

(meanwhile in the kitchen):

"OHHH" Misa heard from the room "their fighting again??? they can't seem to keep their hands off eachother"

(and now to the stuff you wanna read)

"L! you'll leave marks!" Light managed to groan in his excitment "I guess I'll go lower" "L!" Light almost scream with the sensation "where misa doesn't look" 'I'm so overheated' Light thought as he held L's soft hair for confort as Light pants were undid and pulled down. L looked up, adorably of corse, and smiled "your exciting pretty fast" Light closed his eyes and turned to the side tears filled his eyes out of excitment and trying not to come to early L licked the tip "like it?" he said suductively. Light nodded his mouth pinched down "well I'd like to enter" L said unbuttoning his own pants Light whipped his head in disbelief, he was flustered at the feel of L Light couldn't controlled it he moaned louder than ever, he grabbed onto the sheets and L lifted him up, both thrusting and kissing

"AUGH AUGH AUGH" misa (still looking through the fridge) looked down the hallway to the down which L had light pinned against the door "oh no!" Misa said "their going to break something" and with that she wondered to the door

(BACK TO THE SEX)

L was thrusting Light into the door "L-L" Light mumbled "I'm going to-" his head flung up in extasy and L proseeded to suckle once again "Oh L" Light thought right there how he just wanted L and not to be- oh shit "RYUK!" Light cried at the sight at his shinigami laughing in the corner repeating "humans ARE interesting" "Light-" L said backing up broken hearted "you have someone else?" Light relized how it would look "no- L you don't understand!" "I think it would be best to find kira" L said as he lifted his pants up, Light approched him "L- L I lov-" *knock knock* misa had return "I suggest you get dressed" L said his head still down, Light rushed back into his suit and let misa in "oh I didn't find them sorry L" Misa sat on Light's lap as he looked at L whose back faced them, but as he turned he saw the tears "Oh Light I forgot to say" misa said "I'm leaving tonight for a modelling job so I'll be back in a week, thats why I didn't leave you alone" she said rubbing her head against his shoulder. Light shattered only looked at L who haden't reacted to anything 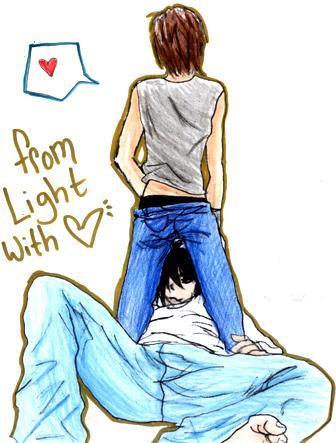 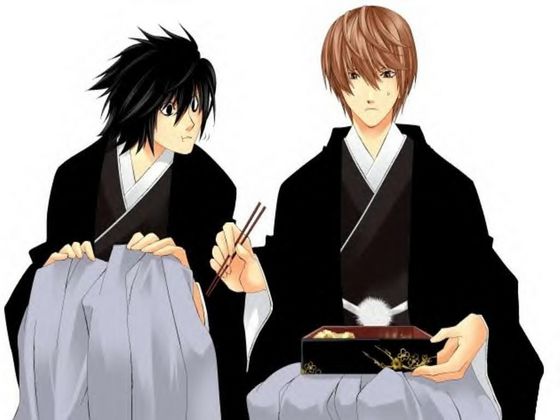 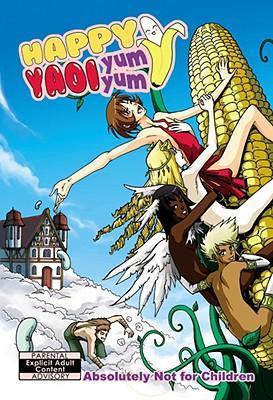 Idk32123, TeamPeeta649 and 2 others like this
superyaoiluver \(//∇//)\ aaahhhhhhhhh
1
A Bugged Room -Death Note Fanfic-
posted by Lafuita 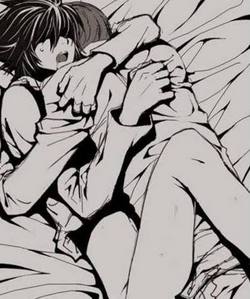 
"Liight!" Sayu called to her older brother
"A friends says they're here to see you!" Quickly Light rushed down the stairs to greet the person who claimed to be his friend but was put to slight ease when he saw Ryuzaki standing outside
"May I come in?" Asked Ryuzaki politely. Light nodded then turned to his mum
"Could you make Ryuzaki and I some tea?" Light's mother nodded and walked off to the kitchen. Light was about to go upstairs but then noticed Sayu staring at Ryuzaki's crotch
"Hu - hem? Sayu?" Light's younger sister turned...
continue reading...
Broken, chapter 1
posted by Silver_Neko
Sing to me songs of the darkness…
Farewell to heaven, my friend.
Come to me, bury your sorrow…
Temptation await the condemned.
Crona woke with a gasp. He had had a certain song stuck in his head for a week, now, and he didn’t know what to do. Somehow it suited him, though. A lot of depressing songs did. The demon swordsman looked up out of the little window in his room at the DWMA. Light shone down into his room, but missed Crona altogether, making him feel dreary.
“Ugh…” Crona mumbled as he got up out of bed. He looked out the window again....
continue reading...
8
Death the Kid X Crona: Part 1
posted by TeamPeeta649 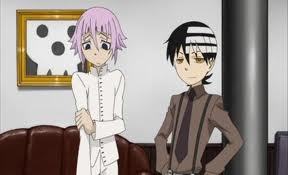 Crona stood away from everyone else at the party at Death the Kid’s house, watching them as they socialized.
Death the Kid walked over to Crona and stood beside him, following his gaze that was directed at Black Star, Tsubaki, and Patty. He let out a short sigh. “Sorry Crona. A noisy group like this must make you uncomfortable.”
Crona looked at Kid then down at the floor. “I’m not completely used to it yet, but I’m not feeling uncomfortable either.”
Kid put his hand on Crona’s shoulder lightly and closed his eyes. “No one’s going anywhere for a bit. So you can take your time;...
continue reading... 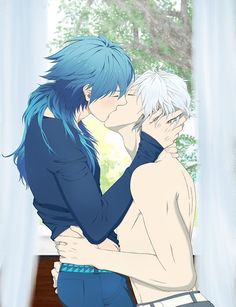 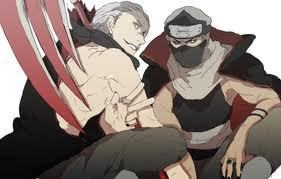 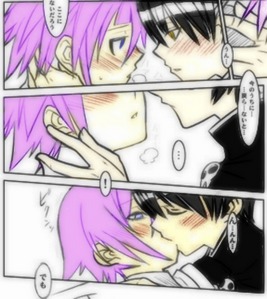 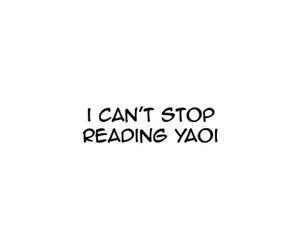 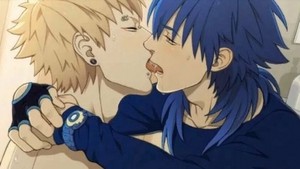 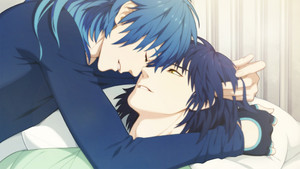 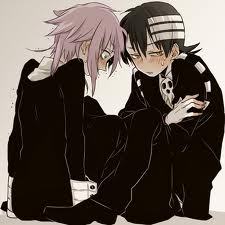 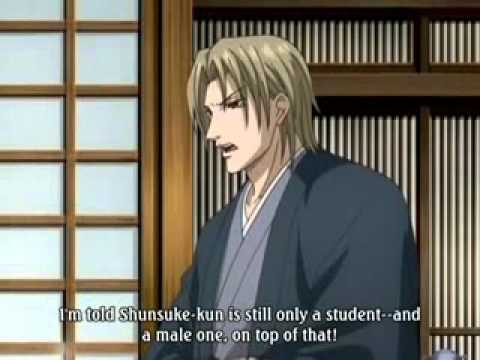 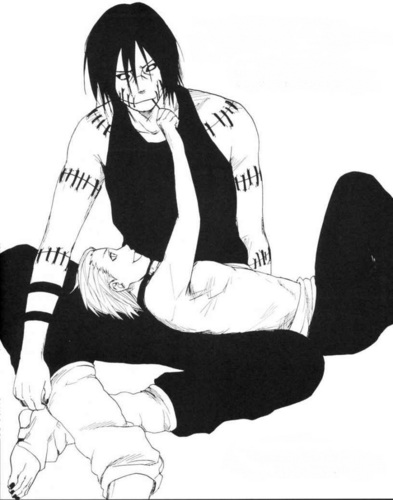 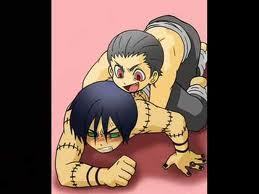 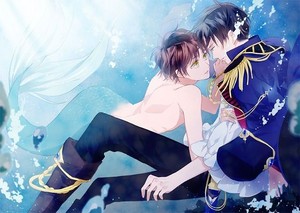 Kirepapa
added by chiga09
video
yaoi
kirepapa
anime
1
Out of the Closet and onto the Lab Table: Part 1
posted by TeamPeeta649 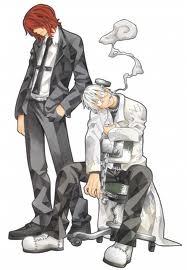 Spirit ran down the halls of the Death Weapon Meister Academy as fast as his legs would carry him. He entered the school’s hospital and sat down on the bed, putting his head in his heads. “I screwed up. Maka isn’t even at school right now. All this risk for nothing. The only place to see Maka is at the academy, so I came, sure, but coming here means I might run into him. FRANKIN STEIN!” Hidden under all the terror in his voice was a certain tone of something else, something deeper. Something that sent a sharp pang through his heart. He pushed the feeling down and rubbed his temples....
continue reading...
4
L and light afterhours
posted by mcluvin

"light-kuuun" misa voice rung out more irratating than ever, lights stern face ignored her pleas "if your bored than leave" light coldly said
L felt the blood rushing to his head, though L didn't think it was right he couldn't help but love the way he so strongly said it, L looked at him in admiration misa looked at him angrily "LLLLL your so annoying" Light cocked his head at L and L prepared himself for light to second it but he looked at L like he wanted to protect him than he whipped his head at misa, she smiled and sqeauled "finally your paying attentio-" "SHUT UP MISA" his mouth grinded...
continue reading...
More Cards
1234567891011