Draco to his father: 'I thought you were going to buy me a present.' (CS4)

'What's the good of that if I'm not in the house team?' said Malfoy, looking sulky and bad-tempered. 'Harry Potter got a Nimbus Two Thousand last year. Special permission from Dumbledore so he could play for Gryffindor. He's not even that good, it's just because he's famous… famous for having a stupid scar on his forehead…'
…
'… everyone thinks he's so smart, wonderful Potter with his scar and his broomstick –'
'You have told me this at least a dozen times already,' said Mr Malfoy… (CS4)

'I hope my son will amount to more than a thief or a plunderer, Borgin,' said Mr Malfoy coldly… 'Though if his school marks don't pick up,' said Mr Malfoy, more coldly still, 'that may indeed be all he is fit for.' (CS4)

'Bet you loved that, didn't you Potter?' said a voice Harry had no trouble recognising… 'Famous Harry Potter,' said Malfoy. 'Can't even go into a book-shop without making the front page.' (CS4)

'Potter, you've got yourself a girlfriend!' drawled Malfoy… (CS4)

'Oh, it's you,' said Ron, looking at Malfoy as if he were something unpleasant… (CS4)

'Everyone queue up!' Malfoy roared to the crowd. 'Harry Potter's giving out signed photos!' (CS6)

'Jealous?... Of what? I don't want a foul scar right across my head, thanks. I don't think getting your head cut open makes you that special, myself.' (CS6)

'Be careful, Weasley,' sneered Malfoy. 'You don't want to start any trouble or your mummy'll have to come and take you away from school.' He put on a shrill, piercing voice. 'If you put another toe out of line –' (CS6)

'Weasley would like a signed photo, Potter,' smirked Malfoy. 'It'd be worth more than his family's whole house.' (CS6)

On the Nimbus Two Thousand and Ones: 'Good, aren't they?' said Malfoy smoothly. 'But perhaps the Gryffindor team will be able to raise some gold and get new brooms, too. You could raffle off those Cleansweep Fives, I expect a museum would bid for them,' (CS7)

'No one asked your opinion, you filthy little Mudblood.' (CS7)

'Arthur Weasley loves Muggles so much he should snap his wand in half and go and join them,' said Malfoy scornfully. 'You'd never know the Weasleys were pure-bloods, the way they behave.' (CS12)

'You know, I'm surprised the Daily Prophet hasn't reported all these attacks yet,' he went on thoughtfully. 'I suppose Dumbledore's trying to hush it all up. He'll be sacked if it doesn't stop soon. Father's always said Dumbledore's the worst thing that's ever happened to this place. He loves Muggle-borns. A decent Headmaster would never've let slime like that Creevey in.' (CS12)

'Saint Potter, the Mudbloods' friend,' said Malfoy slowly. 'He's another one with no proper wizard feeling, or he wouldn't go around with that jumped-up Granger Mudblood. And people think he's Slytherin's heir!' (CS12)

'You know I haven't, Goyle, how many times do I have to tell you?' snapped Malfoy. 'And father won't tell me anything about the last time the Chamber was opened, either. Of course, it was fifty years ago, so it was before his time, but he knows all about it, and he says that it was all kept quiet and it'll look suspicious if I know too much about it. But I know one thing: last time the Chamber of Secrets was opened, a Mudblood died. So I bet it's only a matter of time before one of them's killed this time… I hope it's Granger,' he said with relish. (CS12)

'Azkaban – the wizard prison, Goyle,' said Malfoy looking at him in disbelief. Honestly, if you were any slower, you'd be going backwards.' (CS12)

'Father says to keep my head down and let the Heir of Slytherin get on with it. He says the school needs ridding of all the Mudblood filth, but not to get mixed up in it. Of course, he's got a lot on his plate at the moment. You know the Ministry of Magic raided our manor last week? ... Luckily, they didn't find much. Father's got some very valuable Dark Arts stuff. But luckily, we've got our own secret chamber under the drawing-room floor –' (CS12)

'Wonder what Potter's written in this?' said Malfoy, who obviously hadn't noticed the year on the cover, and thought he had Harry's own diary…
'Hand it over, Malfoy,' said Percy sternly.
'When I've had a look,' said Malfoy… (CS13)

'I always thought Father might be the one who got rid of Dumbledore. I told you he thinks Dumbledore's the worst Headmaster the school's ever had. Maybe we'll get a decent Headmaster now. Someone who won't want the Chamber of Secrets closed. McGonagall won't last long, she's only filling in..." [to Snape] "Sir, why don't you apply for the headmaster's job?' (CS15)

'Yeah, right,' said Malfoy, smirking. 'I expect you'd have Father's vote, sir, if you wanted to apply for the job. I'll tell father you're the best teacher here, sir…' (CS15)

'I'm surprised all the Mudbloods haven't packed their bags by now,' Malfoy went on. 'Bet you five Galleons the next one dies. Pity it wasn't Granger…' (CS15)
Yumi12121, Britsessed and 3 others like this 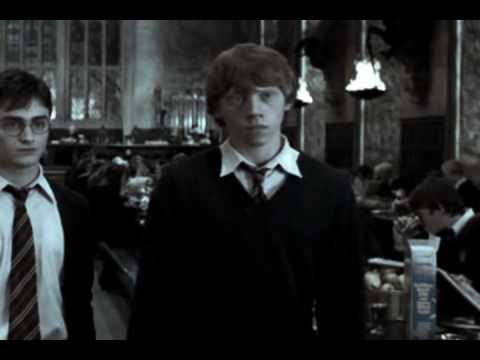 6
"I Was Chosen For This." Draco Malfoy - Crawling
added by BruCaS_LoVE
video
draco malfoy
tom felton
half blood prince 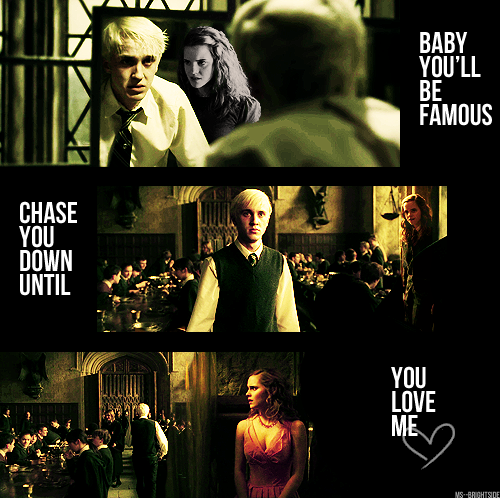 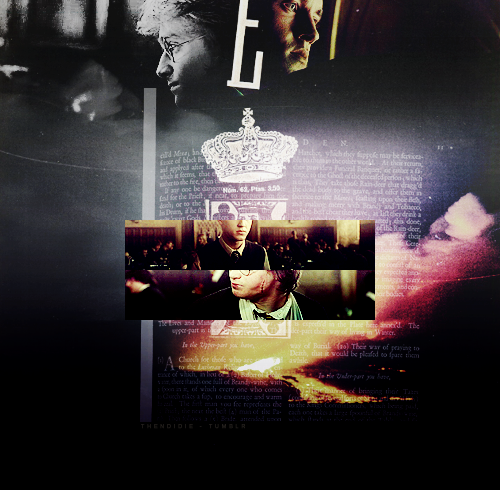