Wild Dogs (Era of the Sun) Chapter 4
posted by Moonstorm100 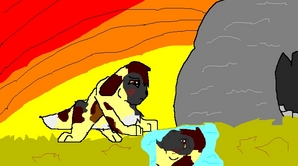 As Apollo walked through the long prairie grass, many scents wafted around him. Most were from the dogs of Moon, although he could also smell much prey, including the large huffed ones like buffalo, warthog, and antelope. Moon seemed to have a buffet right in there, own territory!
Apollo kept low to the ground as he stalked through the long grass. Dawn had hit and lit up the sky, Apollo was grateful that the suns reflection on the yellow grass would hide his coat much better than the darkness.
Soon he began to scent another dog; it was a female who had the scent of Moon, on her. Apollo dropped closer to the ground as the prairie grass began to rustle, a large buffalo darted out followed by a dog from Moon, Apollo was about to race after it but then another one appeared on its tail, and then another. Apollo watched in disbelief, as two more charged pat his hiding spot without even noticing him, he stood from his hiding place and watched as the buffalo was chased by the five dogs, then just as it seemed the buffalo would escape, it ran into a trap, two more dogs leaped on it as it charged past where they had been waiting in ambush, the dug there fangs into both sides of its neck. Soon the five dogs caught up, their breaths heaving, and finished the buffalo off.
Apollo had never seen so many dogs in his life! Then two more dogs emerged and also shared the kill, every one of the dogs smelled of Moon. Then after a couple heartbeats of eating they dragged their kill away, Apollo guessed they were taking it back to their camp.
Then a female dog appeared from the undergrowth, her nose was lifted in the air as she was walking towards him. Apollo knew she had to be one of the hunters that helped catch the buffalo; she must have picked up his scent! Then as she almost reached his hiding place he lunged at her. The female screeched in surprise but held her ground, and didn’t try to run.
The pair tussled on the ground for a few heartbeats, snapping at each other and raking their claws down each other’s sides. Apollo purposely tried to kick the breath out of her, so she wouldn’t be able to yowl to her pack mates for backup. After a couple of heartbeats of tussling, Apollo used his bigger strength and pinned her to the ground.
The female sneered under his weight, and flailed but her efforts were useless. She was flopped down on her stomach while Apollo covered her whole back with his body, keeping his jaws raped around the back of her neck, in case she would try something. “Intruder” she grasped, “how dare you trespass in our territory and then brutally attack me!” She spat.
Apollo didn’t answer, he just kept his jaws around the back of her neck then he slowly got off of her but kept his jaws wrapped around the back of her neck. As soon as she was free, she tried to make a dash away, but as she did, Apollo started to dig his fangs into her neck, she screeched in pain. “Let me go” she growled. Although the female barley tried to get free, if she tried to tug away, he would dig his fangs deeper in her neck, and if she didn’t even try then she would be his prisoner. “There’s just no way I can win this small battle is there?” The female snarled at Apollo.
Apollo remained silent as he began to heed her away from Moon territory and back to his own. I did it, Apollo realized; I’ve captured a Moon prisoner! 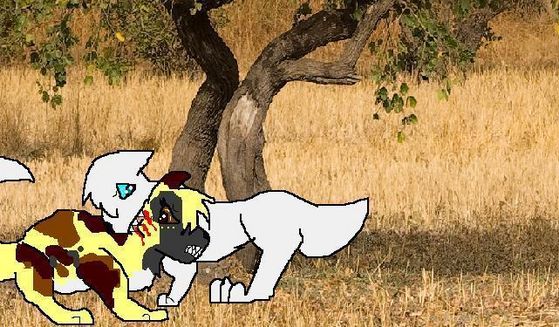 Apollos captured a dog from Moon!
Bluefire7777 She is all like Im gonna kill u when i get out of this!
Moonstorm100 lolz! Yea! She mad!
Bluefire7777 yep y is no one commenting
Wilddog7 because its not a best seller yet!
Bluefire7777 lolz
Wild Dogs (Era of the Sun) Prologue
posted by Moonstorm100

The full moon was showing bright, lighting up the night sky, with some help from the stars. Dark storm clouds gathered over head. The trees rustled in the warm wind, as it blew across the open plains. The grass bowed to the fight that was yet to come. And the Antelopes retreated in fear for they didn’t want anything to do with the carnivore’s revelry.
Night shadows crept through the open land, as many shadows crossed over the line that led to life and death. New scents roamed the air as the pack members of...
continue reading...
Wild Dogs (Era of the Sun) Chapter 3
posted by Moonstorm100

The group goes on a raid!
Chapter 3

As Apollo awoke the next morning, he looked around. During the night, he had slept in a huge black cave with the rest of the pack.
At sunset, the day before, he discovered that they like to go outside and watch the sun disappear, they called it a gathering. During the gathering, they shared news of recent activities and bragged about their successes. Although, while the pack was outside Apollo heard them whispering about him. They didn’t like the idea of an outsider joining their pack; no one seemed to like him. They kept their distance...
continue reading...
1
Wild Dogs (Era of the Sun) Chapter 1
posted by Moonstorm100

These are the two sisters of Sol!
Chapter 1

“Oh, isn’t he just beautiful?” A female’s voice was heard. “Yes, he is rather cute, but then again, all pups are cut, Lunadapple.” Another female pointed out.
Who are they, I wondered, where am I? A tongue rasped the pups back, “wake up, my pup” A female spoke reassuringly to the pup. The pup knew Lunadapple was talking; he squirmed for a heartbeat longer then began to slowly open his eyes.
He gazed around at his surroundings. He was lying down in a huge black cave, not much sunlight shown through the entrance; he guessed it must be close to midnight. He looked up,...
continue reading...
More Cards
1234567891011