Worth part VIII
posted by SilverWings13
Worth part VIII
Looming in the gap in the wall was a huge mutant similar looking to the one Superboy was fighting. They were no longer fighting though. Nobody was.
All of the red-robe-monks faced the gaping hole in the wall. A huge mutant much like the one Superboy had been fighting stood in the hole. From the tears in his prison uniform and layer of drywall on his clothes, hair, and skin, he had been the cause of the hole. He was glaring at Superboy.
Beside the mutant was a very tall, very ripped man. He wore black pants with a golden, snake head buckle and belt, red gloves covering the leingth of his forearms, and a red cape with a hood much like a snake head.
"Kobra," I heard Aqualad mutter.
"Children," Kobra said, stepping forward, "causing problems again I see." He motioned to his two hulking mutant friends. The gray one closest to Superboy grabbed Kid Flash, who had stopped running circles around the group of annoyed monks, by the collar and grabbed something from his hand.
He tossed KF to the side were Artemis and Becca caught him. The mutant presented his prize to Kobra. When Kobra held it up, I realized it was the disc shaped Weapon.
"Well," he said, "this has been fun, but I have other... Business to attend to." He turned to go.
"No!" Scarlet yelled beside me. An inferno of flame erupted next me were she had been standing. I stepped backwards as did Gravity Boy and Aqualad. As if it were a signal, the jr. heros jumped into action.
Scarlet launched a burning ball of flame at Kobra. Unfortunately, one of the mutants stepped in front of him at the last moment and was hit instead. Fortunately, we once again had Kobras attention.
"Kill them all," he ordered, clearly irked at the attempt on his life.
Once again the battle resumed, but we were no longer on the defensive. Scarlet cleared a path to the others and we hurriedly regrouped. Now only a few feet seperated us from Kobra. "Cyrus, Shade," Aqualad ordered.
"Occidere!" Becca and the brunett yelled. The gray mutant's eyes rolled back and fell to the ground. Artemis unleashed a hail of arrows on the closest wave of monks, Aqualad was bashing another group with a water-hammer, Robin chucked explosives, while Kid Flash knocked more to the ground. Though Becca and Cyrus looked winded, they delivered tiered kicks, punches, and a squick of useful magic here and there. Superboy was back to wrestling, this time with the other, charred mutant. Scarlet and Lucas stood back to back, seemingly determined to hold their position. I glimpsed all this in a moment before racing after Aqualad out the gaps.
Once back in the hall, we chased Kobra down a set of corridors. He sped ahead of us, though we managed to keep him in our sights. Kobra slammed through a door and I checked my mental map, realizing where he was leading us.
"Aqualad," I said as we approached the door, "he's going to the roof." Sure enough, the door led to a staircase. Looking up, I saw that Kobra was already far ahead.
"He'll get there before us," I said.
Aqualad's eel tattoos pulsed with light as water swirled beneath his feet. "Hop on," he said. Slightly uncertain, but with no time to argue, I stepped onto the spring as we shot up into the air. We arrived at the top just as Kabro ran through the roof access.
We ran after him and blinked in the harsh light of day.
"There's nowhere to go, Kobra," Aqualad stated, "Give us the Weapon." I had a wierd sense of de jas vous, realizing how similar of situation was compared to my predicament the night before.
"You do not understand its power," Kobra yelled, "It is not a toy for children to play with." Only then did I notice the thudding of rodars in the distance. He was stalling.
"What makes you think you understand it's power?" Aqualad yelled back, taking a small step foward. He had notice the sound too.
"I understand it to a far greater extent than you ever will," Kobra responded. The helicopter came into view, the wind churning the air. Aqualad shot a turrent of water at the chopper, but it veared away with ease.
The chopper lowered slightly and Kobra leapt into its open door. Aqualad and I sprinted up to it, but it hovered over the edge, too far a jump for either of us.
"So long," Kobra said, waving the Weapon in his hand. A sudden wave of anger rushed through me as the helicopter rose into the air.
Out of pure instinct, I yanked a throwing knife from my belt and projected it at his wrist. The knife spun in the air. Kobra gave a surprised yelp as it hit its target, dropping the Weapon.
I realized my mistake as the black disc fell toward the ground. Panicked and without thinking, I leapt off the roof, clasped the case in my hand, and fell toward the canopy of trees. I was aware of a wail of defeat, a thudding from the chopper as it flew off, someone screaming my name, the wips and slashes of the braches, and a distant explosion before my world went black.

*Second to last chapter (I think)! I stayed up pretty late (is 1 a.m. technacilly early?) working on this so I hope you like it. I'll have up the lag chapter(s) ASAP! Hope you like!
66Dragons Uh oh... POSTMORENOWPLEASEIMGONNADIEYOUREHOLDINGMEINSUSPENSEOMG!!!!!!
Live Another Day Part 19
posted by Robin_Love
Willow felt worried. After all they'd done to get the antidote, it was a fake. And now she was running from security guards and assassins. I hate Lex Luthor more than ever! I should've payed more attention when Becca was teaching me how to hack! Narrowly missing a bullet, Willow ducked under the closest thing. Unfortunately for her, it was a large dumpster. When she saw their feet go past, Willow crawled out from under there and wiped herself off. She turned as a gun shot was heard. The bullet was pointed right at her. There was a blur of blue and white. A teenage boy stood in front of her,...
continue reading... 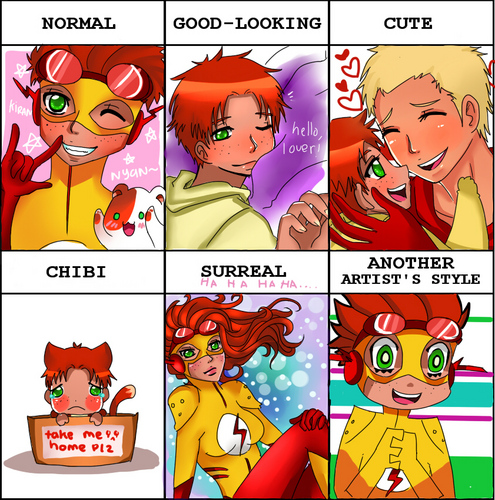 1
All for Wally
added by Skittles98 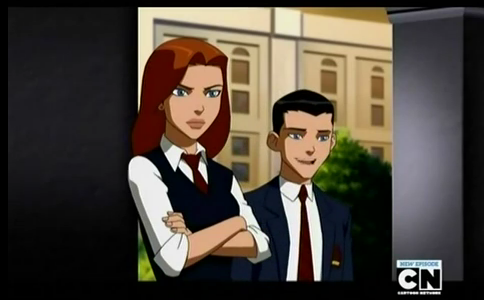 1
I'm a spoiler!
added by Robin_Love 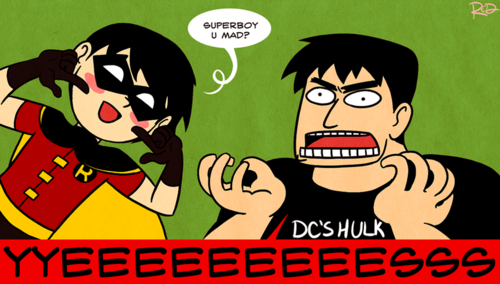 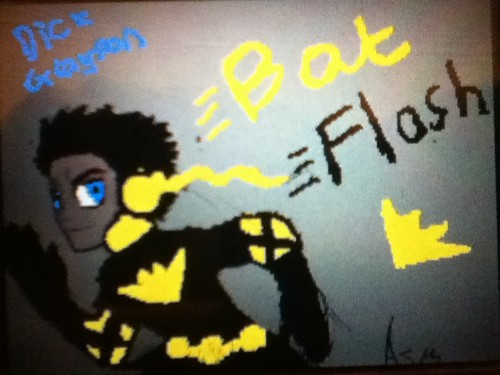 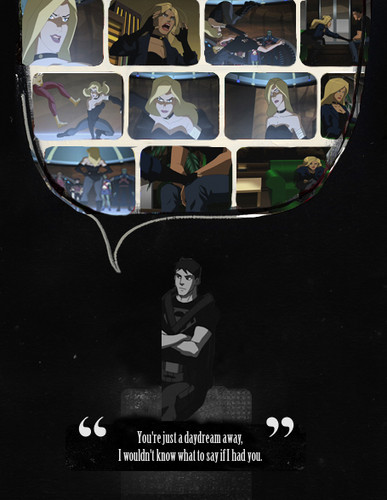 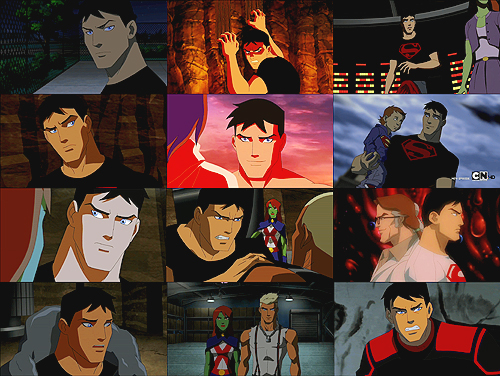 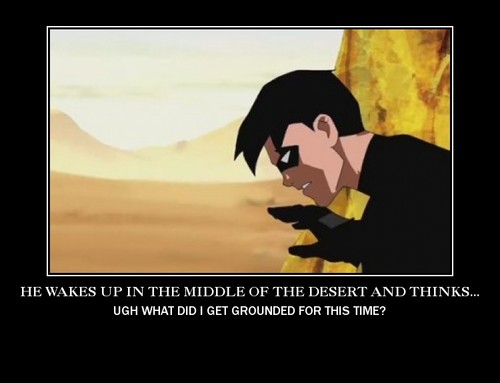 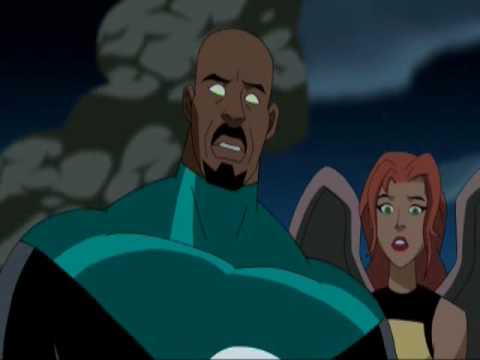 It was a regular day at Gotham Academy; Popular girls bulling others; Jocks being stupid; Teachers being unaware; kids ignoring the situation; a group of very angry undercover superheroes. The five said heroes were sitting with their friends Barbra, Todd, Drake, Cass, and a few others at the table.
"I'm gonna buy lunch," Danna said getting up with a few 'OKs' from the group. But a minute aster she left evil struck AKA Nicole...
continue reading...
3
Robin meet Robin-Part 1
posted by justjill
"So...Have you found any girls yet?" Wally asked me. Here we go again, another one of his talks about his social life when I could be paying attention to battle field where Aqualad and Artemis fighting on the field. Artemis flipped Aqualad on the ground, before I continued,"Nah, The B man doesn't want any drama in the cave, we get enough emotions from Alfred." "Alfred?! Seriously Rob ? Are you gonna keep on staying single until you grow old and die?" I broke into a grin,"You know this is coming from you, the ladies man who haven't even got a lady.""Hey, at least I try...you know I could give...
continue reading...
The Jaguar: Chapter 2
posted by Skittles98
“We’ll help you” Robin decided
“You are not the one to make that choice: Aqualad is” I said, turning to him.
“Yes, I am. And I agree with Robin. We will help you, Princess” he said
“Thank you. We must hurry” I said, rushing to the bio-ship. I waited while everyone filed into the bio-ship and stood beside Miss Martian.
“Take this route. It is safe, but only if we go through Torment Forest, past Piranha Cove, but avoid the Chasm of Chilling Mist’s, then over Wakanda” I instructed. “If we go any other way, we will be spotted” We started going straight over the jungle I...
continue reading...

thinking Mr. Right [Robin x Kid Flash]
added by RavenclawQueen
video
young
justice
1
Hello bird End
posted by Robin_Love
“W-what?”
“He told me if I didn't do the things he told me to, or if I fought him, he would hurt you.”
Robin stared at her for a minute.
“Why were you there?” she whispered.
“Huh?”
“Why did you show up? I had no clue where I was. Why did you find me?”
“Because I wanted to tell you something. Something that I should've told you a long time ago. Something I wanted him to hear. I was there because you needed me and...”
“And...?”
“And I needed you. But I couldn't say what I still need to say because he was all over you and I grew...”
“Yes?”
“Jealous. I became jealous...
continue reading...
Speed of Things part 12!!!
posted by Robin_Love
“Hurry! We could be too late!”
“Wally, stop it! Don't make me nervous or it'll be too late for you!”
Wally shut his mouth, looking over Becca's shoulder instead. She groaned but the code was accessed. They ran down a secret corridor, following the once Dark Angel. When they got to a fork, Devin turned to them.
“We'll have to split up. Becca and I will take the left. You guys go for the right.”
Before anyone could object, both girls turned and ran down their hall. When they were out of sight, Devin opened her wings in the bigger space.
“Did you...know this would...happen?” Becca asked,...
continue reading...
Speed of THings Part 11!!! With my little twist! XD
posted by Robin_Love
“What's the plan?” Wally whispered as he and Becca danced to the song.
“Just keep playing as we are. I had Devin let the others know. We're the inside spies. Any sign, we let them know. And vice versa.”
“So we have to keep faking liking each other until we find find Robin?”
“That would be correct.”
For some odd reason, Wally felt his heart sink. There was something about Becca that drew his attention. It made him want to focus. And that was saying a lot, considering his long record of NOT being able to pay attention. He pulled Becca jut a little bit closer and was surprised when...
continue reading...
Speed of Things Part 10
posted by Robin_Love
A smile lit his face.
“As long as we find Robin, I don't care what we do.”
Becca nodded. She led him to a secluded area and pulled a tux out of her belt.
“What?! How'd you-Why's that in there?!”
Becca smirked.
“Take a guess Kid Spaz.”
Wally blushed a little as he took it and the answer came to mind.
“In case you and Robin go out after missions?”
Becca nodded.
“Devin can use a little of her guardian power to make it fit you. Now if you need me, which you shouldn't, I'll be back soon.”
Becca slipped off and Devin sprinkled a bit of magic on the suit. It grew to Wally's size and she...
continue reading...
Speed of Things Part 9!!!!!
posted by Robin_Love
The escrim sticks twirled in her hands and Wally noticed it as a nervous habit. They were spinning almost faster than he could follow. His eyes followed them round and round. He was starting to get dizzy and pulled his gaze to her face. She was biting her lip as she searched for an answer. But she suddenly slammed the weapons to the ground; thank goodness they were shatter proof.
“Where did they take him?!”
Wally felt uneasy. He was alone with Robin's girlfriend who was, at the moment, pretty pissed about her boyfriend's disappearance. They had been hunting for weeks, Becca continuing when...
continue reading...