Behind the scenes of YJ
posted by ecoelo
And....CUT!
"Okay ladies nice job. A few more horrors to go then we are finished!" the director put his jacket on and sighed. "Just sick of this crap" Arsenal stormed up to him.
"How can you cancel YJ? I just don't understand?!"
"Yeah and I haven't been on screen yet!" Damian whined and did his puppy face. Dick patted his back and sighed.
"Its just how it is..." and walked away with Damian without looking back. The team glanced at each other.
"We do have millions of viewers. Why more?" Conner stepped in.
"Its not enough!" the director turned around with an angry look on his face.
"How much do you want!?" Lagoon boy screamed. Megan calmed him down.
"Its done! I'm sick of directing this show! One more word from your fishy mouth I will change the show around and make Connor kill you!"
"AND why would you think I would do that?!" Connor fought back.
"Oh don't deny big boy. You still have feelings for Megan since that break up!" the director turned around and head out the door. Everyone turned to look at Connor who stormed off talking to himself.
"Whatever happens angelfish, I'll always be there." Lagoon boy put his arms around her.
"Lagoon boy! Its not the right time!" Megan got out of the hug and ran straight to Connor.
There was dead silence.
"What about the fans?" Impulse said. Braking up the silence. Everyone shrugged.
"Devastated." Mal replied before looking down to his feet.
"There goes my reputation!" Impulse walked away followed by Tim who rubbed his face in frustration.
"I read that people were gonna kill CN for canceling YJ" Wally just walked in with a laptop in his hands.
"I sure would!" Lagoon boy stated but no one really bothered. They all crowded around Wally.
"Hey look! That person sure is mad!" Blue Beetle pointed at the screen. Everyone laughed.
"Hmmm there's a lot of people who love us out there"
"Now don't get all lovey dovey kids! Everything will soon be over and Gordon Godfrey will be done! Ahhhhh... Freedom" Gordon took a sip of his extra hot coffee then...
UGGHHHHHH!!!
"What the heck is in this thing?!" Gordon screamed with anger.
"Sir, no cream, no milk, no sugar. That is what you ordered." a lady who seemed to be Gordon's assistant.
"Then what is this?" Gordon pointed on the floor where he spat everywhere. In the dark coffee there were white dots just like sugar...
"I didn't put sugar I swear, sir!" there was a slight giggle in the audience.
"What did you do?" Artemis asked moving her mouth to the side.
"I put 10 packets of salt in his coffee" the couple burst out laughing.
"Is there a problem?" Gordon shouted as his assistant dabbed his chest with a cloth. The couple had trouble trying to breath but had a chance to reply.
"That's what you get for being a @$$H0!E" Wally gave his computer to Tim who was beside him. Wally turned to run but bump straight into...
Black Beetle.
Wally bounced off his chest.
"What's going on here?" another black beetle who looked exactly like the one Wally bumped into came into the room.
"Damn." Wally whispered to himself. The Black Beetle in front of him held Wally up in the air.
"He land on me chest" he said staring at the human in his hands. The other black beetle walked up to Wally his fist pounding in his other hand.
*gulp*
(oh and if your confused about the two Black Beetles.Well the one holding Wally (Black Beetle 2) is the clueless one and only wants to wreck things and the other (Black Beetle 1) is used for all the talking.)

"Someones up for a beating huh?" Black Beetle 1 said pounding his fist into his other hand.
"No I didn't do anything!" Wally cried waving his hands about.
"Hey you better not hurt him!" Artemis screamed. Black Beetle 1 laughed.
"Like we're afraid of a little blonde like you!" the Black Beetles laughed.
"Little.Blonde. What is blonde?" Black Beetle 2 asked. Black Beetle 1 nudged him.
"Shut up clueless!" then he turned back to Wally. Then with a wild swing and gasping escaping from peoples mouths...
"Everyone! Back on air! We're starting in 10! Positions! People lets do this right before shut down!"
Black Beetle 1 fist stopped right in front of Wally's face. Not a single touch. Black Beetle 2 dropped Wally onto the floor.
"OO That me! That me! I am in here!" running off to the stage, Black Beetle 1 sighed.
"Siblings just embarrass you and mess up your life!!" he ran after his clueless twin.
Wally fainted right on the spot where the bullies left him.
"Hes not dead is he??" Artemis cried with frustration.
"No of course not. He just fainted. Stop worrying" Roy replied.
"Hey hes my boyfriend!" Artemis screamed.
"Yeah and I have a wife and a child. I'm not trying to protect Jade every single second of my life am I?"
"Nah I just think shes on her period" Arsenal replied before high-fiving his clone.
"You are DEAD!" Artemis screamed. She chase after the two boys. Arsenal and Roy laughed and threw jokes at her.
"Reminds me of immature Wally and hot head Artemis" Dick just entered with Damian climbing all over him. Everyone laughed.
"Damian reminds me of you, Dick" Kaldur smiled. Dick took Damian off his shoulders and stared at him.
"Yeah he does." a tear ran down his cheek. He quickly wipe his head onto his sleeve.
"Hey big guy, did I just see a tear?" Lagoon Boy asked. Dick sniffled and nodded.
"I really enjoyed being in YJ. Now its going its the 2nd worst thing I've experienced in my life so far." another tear ran down his cheek. The girls when "awwww" and the guys went "awww" they all hugged Dick.
"Come on nothing can separate YJ!" Jaime stated. Everyone agreed. "There could still be a chance that we can return later after a few years or months." Mal got teary too. Everyone hugged and faked kissed each other (except Wally who was still on the ground). Connor and Megan walked in wide eyed.
"Did we miss something?"
Catgirl 5
posted by Helen_Wayne
The Bio-ship was more incredible than Robin told me, I was looking all around when I noticed Artemis was glaring  at me, why she got to be so bad with me? I didn't do anything to her… not yet but I will if she continues being bad with me.
-We're arriving to the new HQ of the Injustice League.
Then after Miss M said that, Aqualad have the order to be linked mentally, it is weird to hear more than one voices on your head.
Because the mission was to find out what was their plan, and not to stop it, hiding was our only option. Aqualad said to explore the place by pairs, and because this was my...
continue reading...
1
Perfect Two
posted by Robin_Love 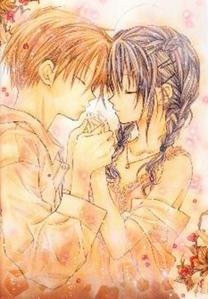 Wally and Willow
I do NOT own the characters!!!Except Becca.

Willow sat up on the mountain, looking at the stars. There were so many. So many places her parents could be. She wondered where they were, why they had given her up. A sound made her turn her head. She smiled with relief when she saw who it was.
“Wally.”
“Hey. You wanna go to dinner?”
She nodded.
“Sure. Sounds like fun.”
Wally smiled and Willow saw the devious glint in his eye. She took his hand and he led her to the back of the mountain.
“I thought we were going to dinner?” she asked.
“We are.”
Willow gave him a strange look but her...
continue reading...
Black Rose part 6
posted by Robin_Love 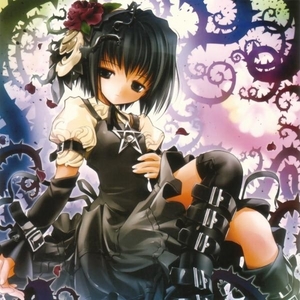 Becca, Gothic Princess
Becca looked up as her mother went out the door. She whispered to one of the guards and then reentered the room. Becca gave her a look but Kendra just smiled coyly. A second later, a girl about two years older than Becca entered the room. Her long blonde hair fell to her knees, her eyes as red as a spring rose. She was dressed in a blue gown, similar to that of her mothers.
“Becca!”
“Fiore!”
The two hugged and Becca looked up into Fiore's eyes.
“How did you survive? I thought he killed you!”
“Anton is great with weapons but my magic is stronger.”
Becca's eyes teared up again as her...
continue reading...
Team Color Part 6
posted by Robin_Love
He felt numb. He felt slow. He didn't like it. Everything inside him was crying for warmth. He could barely move his head. His eyes opened and he looked around. Everything was darkened, minus the light from the three liquids runnning into the three “invulnerable” heroes. He heard a sound to his right and turned to look that way. Robin was moving around. He looked like he was dreaming. And he was mumbling.

Connor heard the words before he even opened his eyes. It was Robin's voice. And the words were bringing tears to the clone's eyes. He heard everything loud and clear and just about broke...
continue reading... 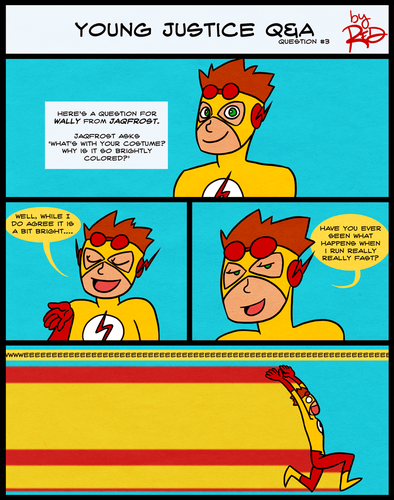 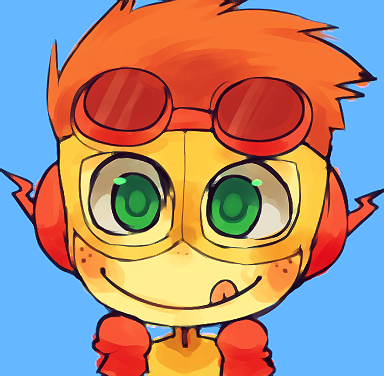 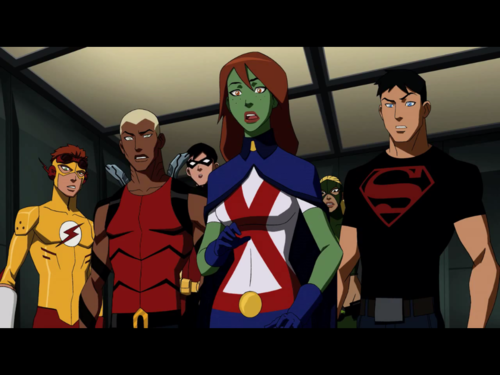 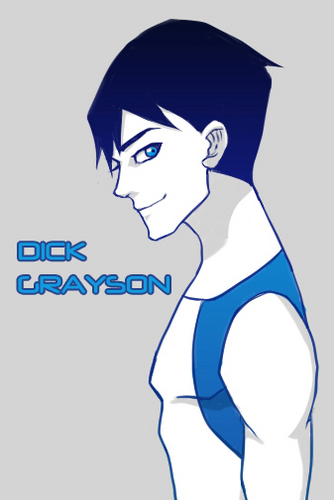 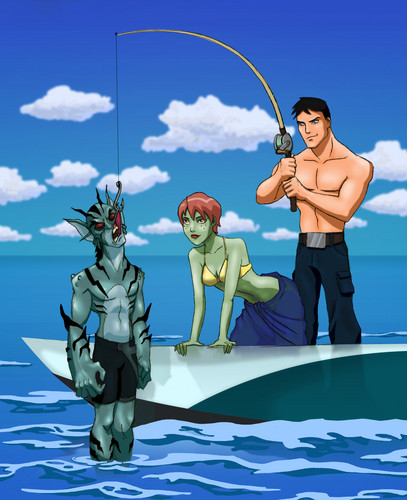 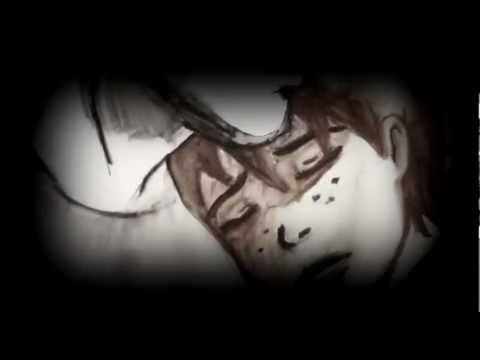 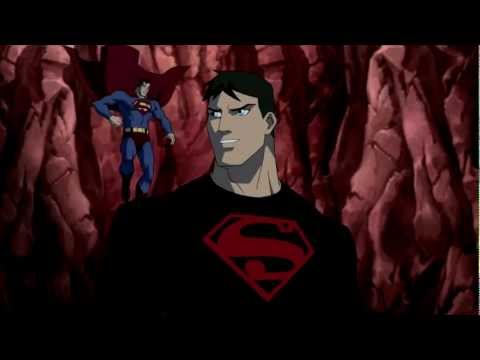 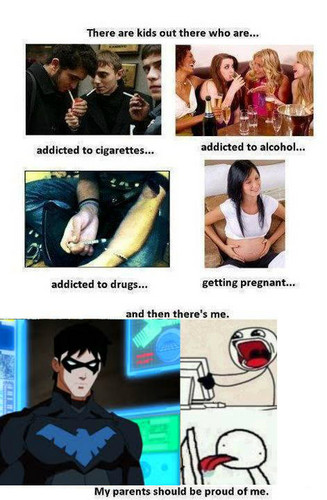 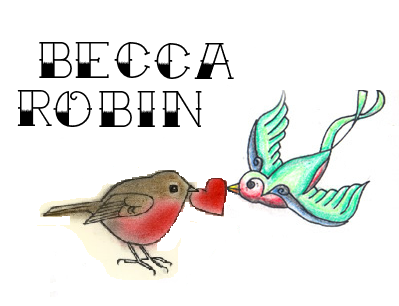 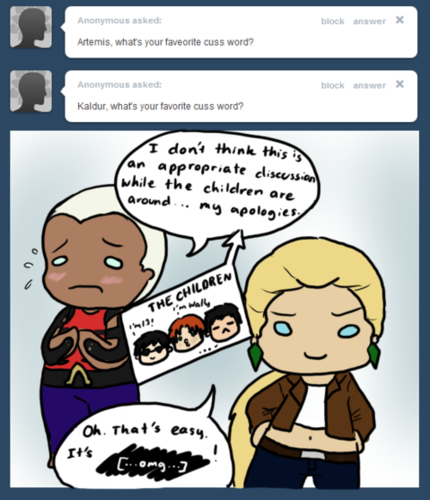 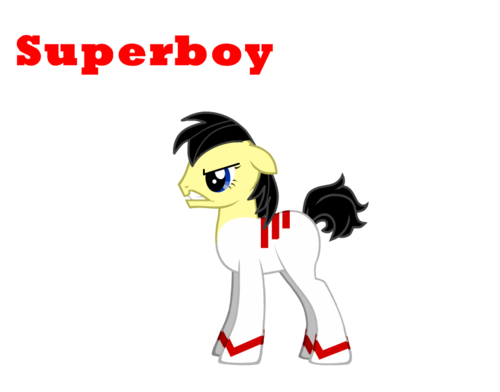 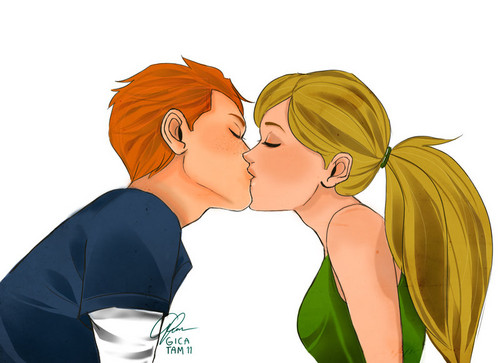 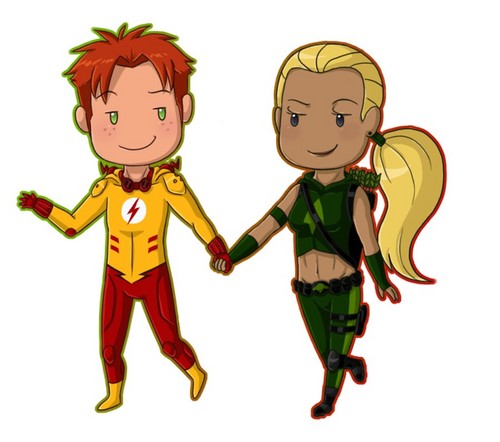